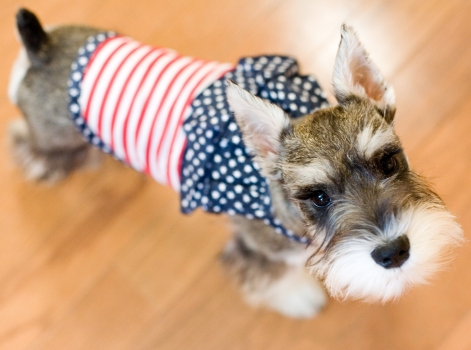 One could not have written the script of where the world finds itself today. Within a few short weeks, our lifestyles have changed to such an extent we could never have envisaged – travel, meals out, the theater, dog shows and other pastimes, all things that we once took for granted, are now pleasures to look to the future for.

The previous times the world found itself in very similar situations, albeit for totally different reasons, was during two world wars, so I have selected a small but varied selection of art and memorabilia that was conceived during those troubled times.

The early years of the 20th Century were the golden years for the dog being used as a symbol of nationhood and patriotism. Some of the popular artists of the day were eager to offer their support when it came to being patriotic and supporting their country and also supporting good over evil, by painting pictures that could be reproduced as prints to help boost morale and in some cases raise much needed funds.

Maud Earl’s "The Allies" was one of the most popular. It was commissioned by The illustrated London News and reproduced as a color supplement. Featured are the Borzoi for Russia, Japanese Chin for Japan, Griffon Bruxellois for Belgium, Bulldog for Britain and French Bulldog for France. It was painted just before Italy joined the Allies in 1915, hence no Italian Greyhound for Italy. 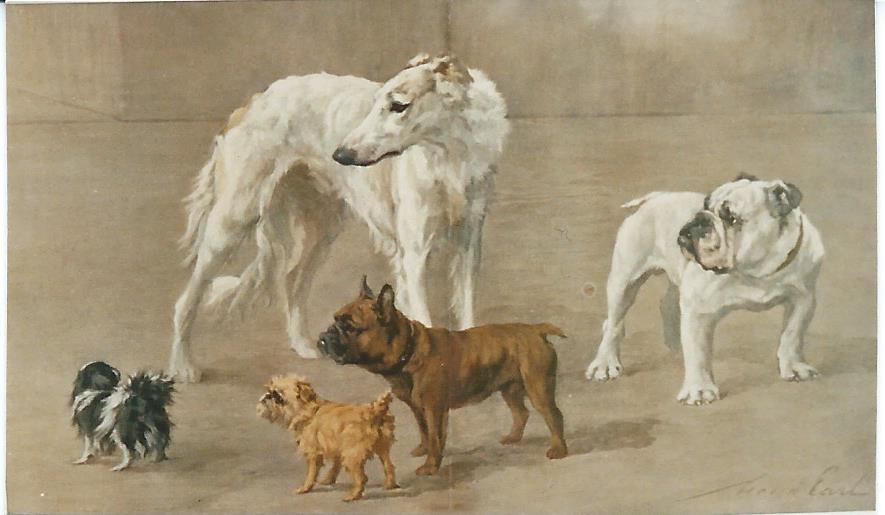 One of the most poignant pieces of wartime memorabilia is the articulated wooden toy in the form of a French Bulldog made by a French prisoner of war during World War I. Perhaps he was thinking of a much-loved child back home waiting patiently for a father’s return. The fact that the toy has survived one can only imagine they were reunited. 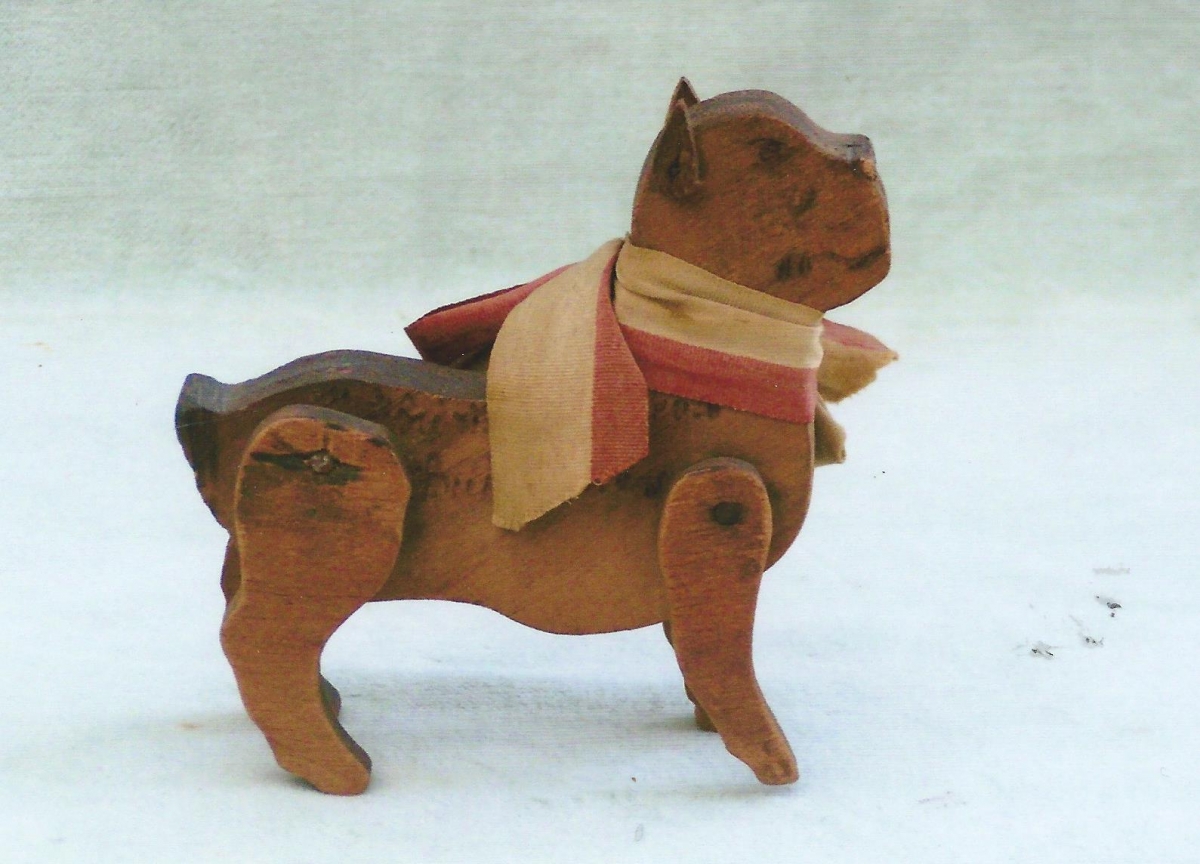 It is rare to find anything from "the other side," and the artist in this instance captures all the drama and foreboding in the stunning German picture, the work of a very talented war artist. The soldiers take cover beside a dyke with open countryside beyond. Animals, including dogs, played a major role in wartime right up to World War I and one of the soldiers holds back a dog with a saddlebag across its back, possibly for conveying massages, medication or small ammunition. 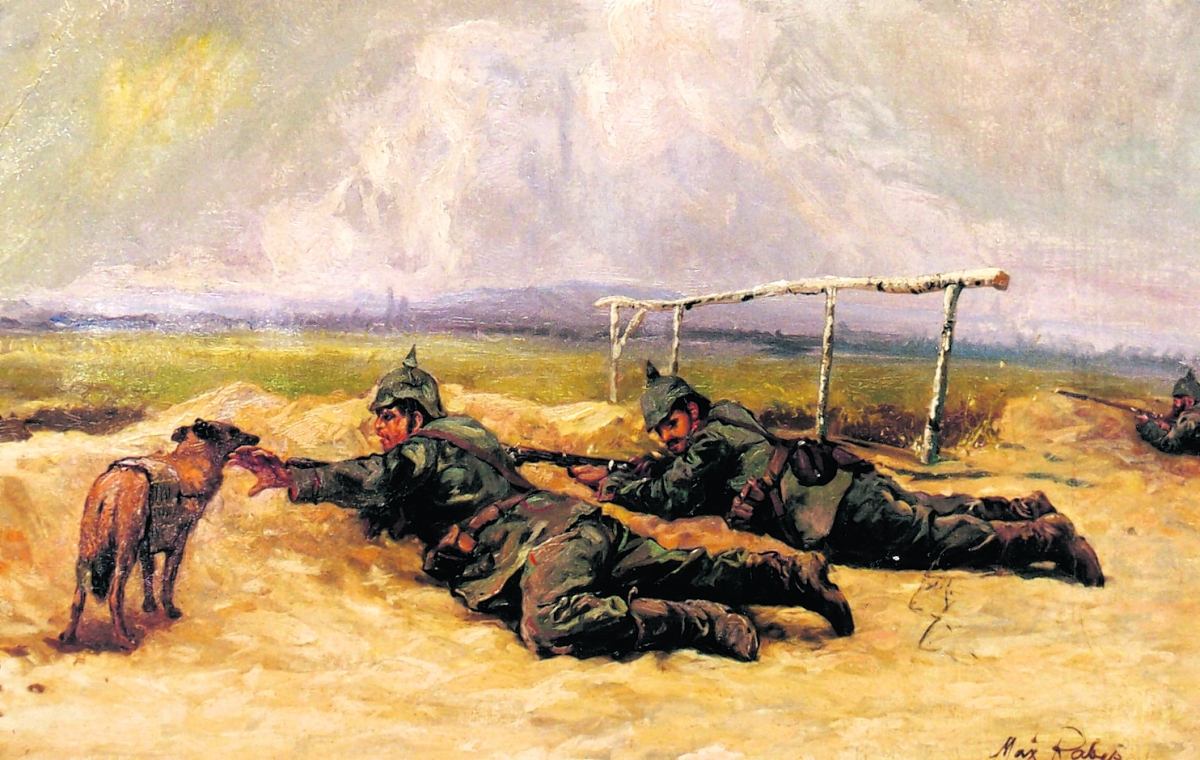 A rare survivor from World War II is the American propaganda handkerchief, the designer of which is unknown. In the top lefthand corner, wearing a coat embroidered with the word "Musso," we see an Italian Greyhound being led away by a Dachshund decorated with swastikas. Both are fleeing with their tails between their legs. They leave behind them a group of dead chickens, symbols of victims, death and destruction. 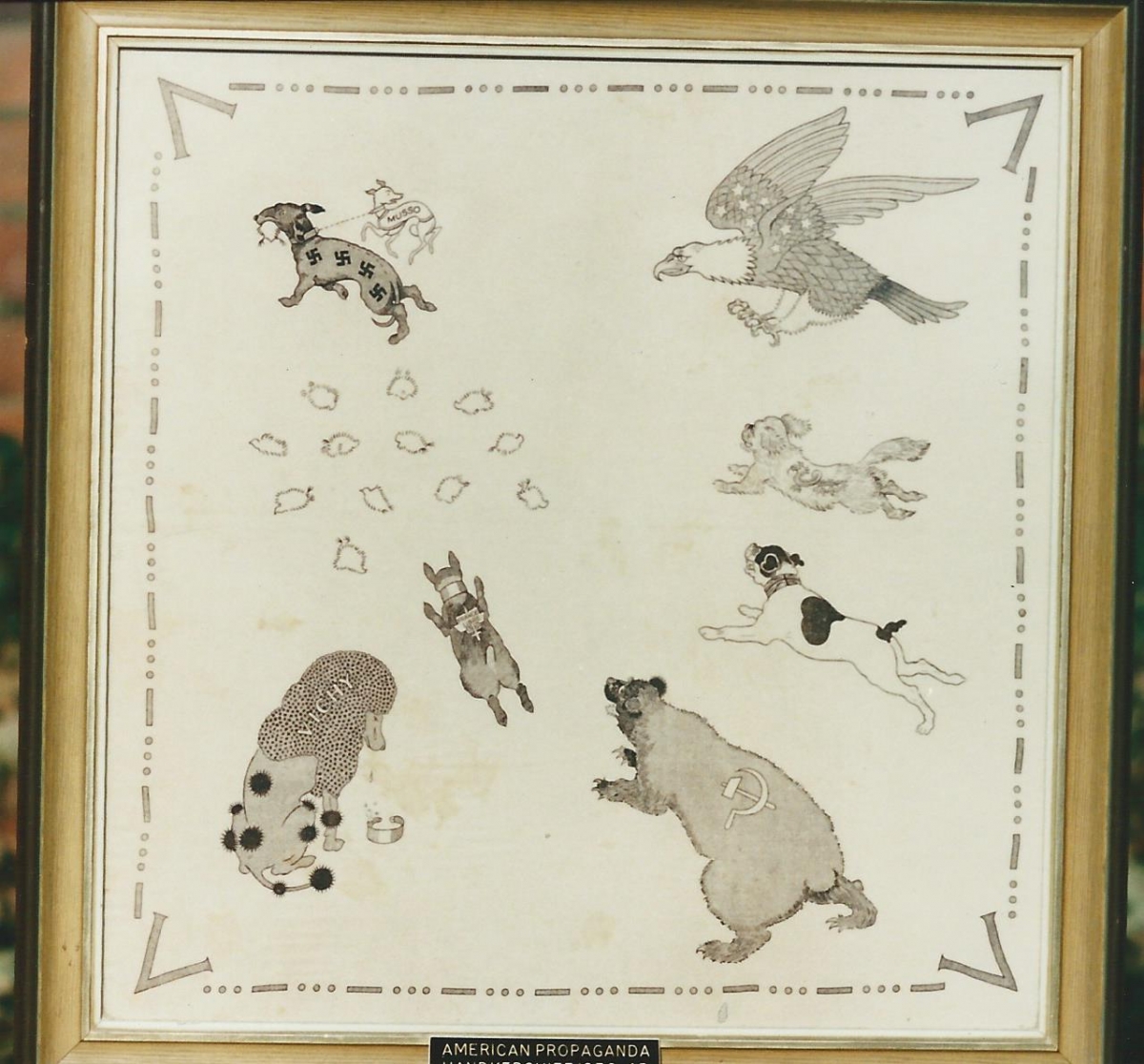 In the Dachshund’s mouth, representing some of the loot Germany managed to get back to "the Fatherland," is a chicken still alive.

In pursuit are the Allies – a French Bulldog for liberated France, who proudly displays the words "France Libre" on its back, a great bear of Russia with his hammer and sickle, the British Bulldog wearing a Union Jack collar, a Pekingese with the Chinese dragon and the American eagle, its striped wings decorated with stars.

Crying into an empty food bowl in the lower lefthand corner, totally abandoned after backing the wrong side, is a Poodle with the word "Vichy" across its mane, its pompoms in black for mourning. In each corner of the handkerchief is a "V" for victory and in a continuous border is dot-dot-dot-dash, Morse code for V. This also represents the first four notes of Beethoven’s Fifth Symphony, written as a victory symphony. Although Beethoven was German, it was adopted by many countries as a victory hymn. 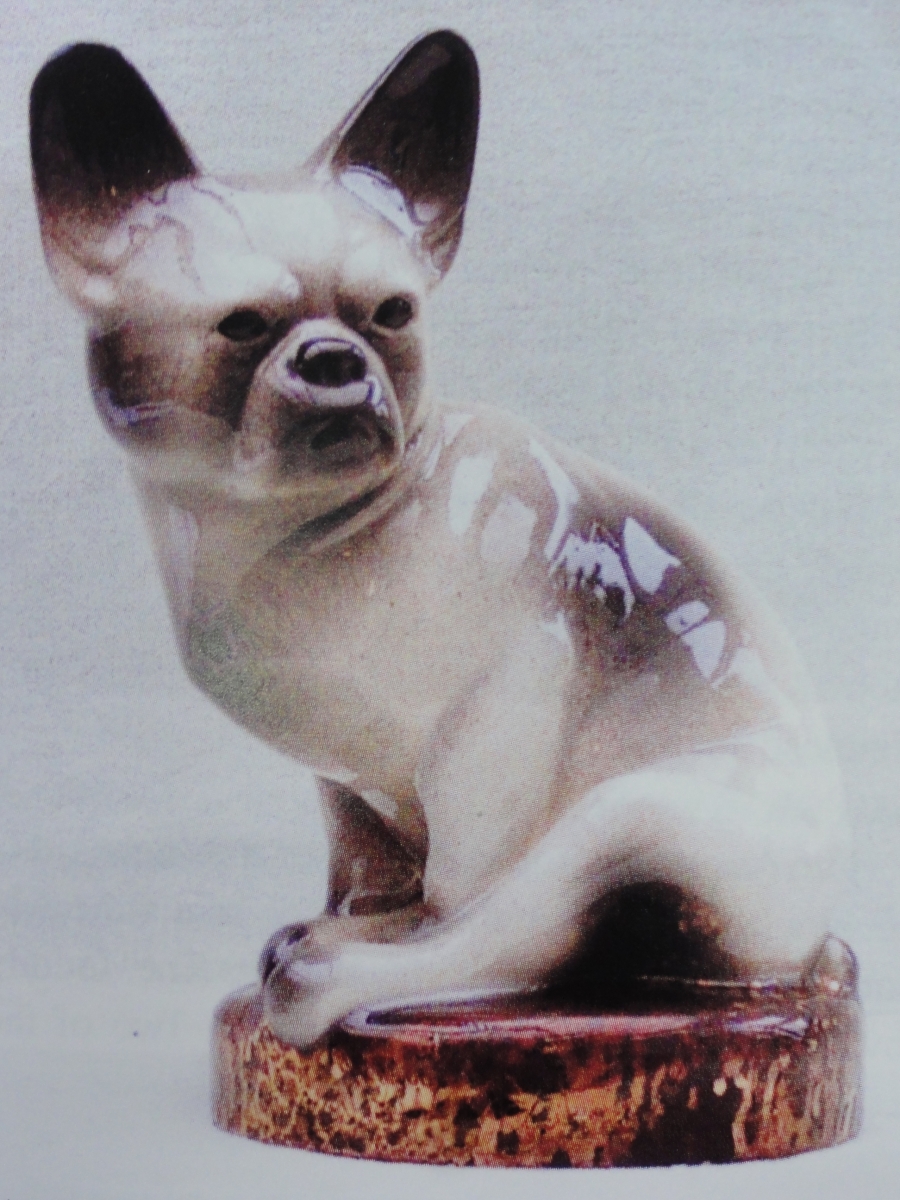 One of the rarest of all French Bulldog models was made by what many people regard as the premier porcelain manufacturer in Europe, for the high quality of the porcelain, complexity of modelling and superb painting and gilding – Sèvres. The French Bulldog displays none of these qualities, the dog being crudely modelled sitting on bases either in white or rather badly colored.

They are, though, great patriotic pieces from one of France’s most troubled periods in history, the German occupation of the country during World War II. The Germans insisted that the factory remained open and producing pottery, so as an act of defiance Sèvres produced a French Bulldog as a statement of allegiance to the French nation.

© Dog News. This article may not be reposted, reprinted, rewritten, excerpted or otherwise duplicated in any medium without the express written permission of the publisher.
Sun, 06/14/2020 - 11:41am