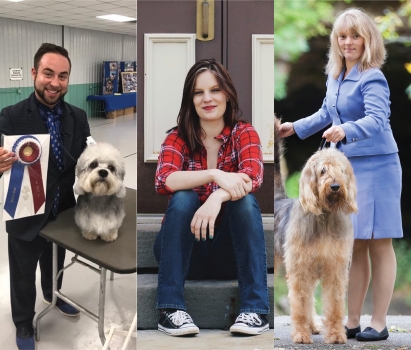 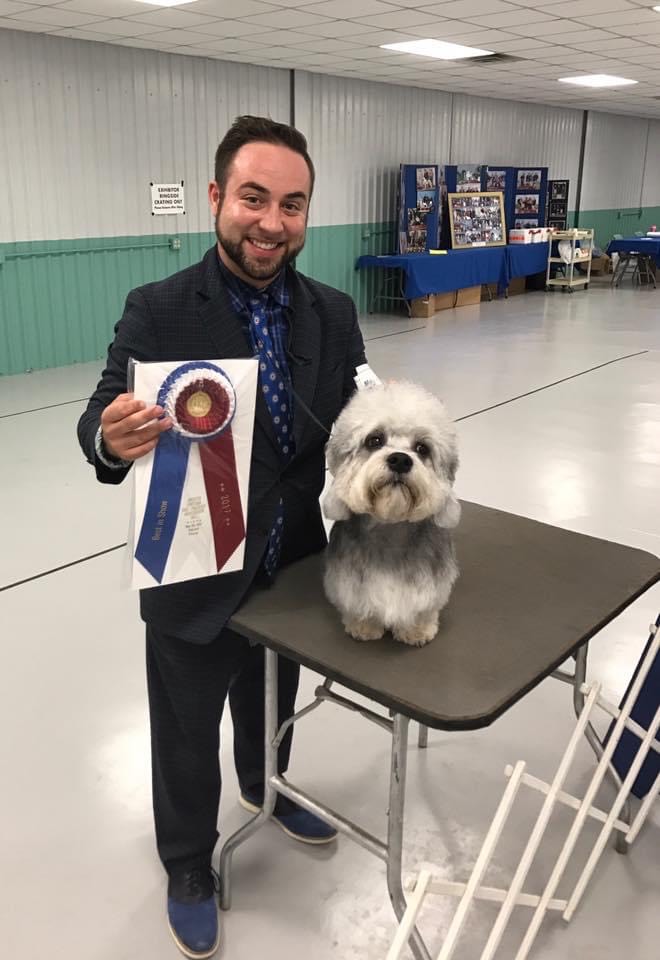 Blake grew up in one of the most tradition-seeped groups in the sport, co-breeding his mother’s BlueCrush Kerry Blue Terriers as well as his own Joli Wire Fox Terriers.

“It’s one of the toughest, most rewarding groups there is because you have to put in so much time, work and effort,” Blake says. “You’re competing with the best of the best – high-caliber people showing high-caliber dogs.”

Though he’s won Bests in Show and breed wins at Westminster and the AKC National Championship, one of his most memorable moments is taking the breed in Kerrys at Montgomery as a 16-year-old under the late Jane Forsyth.

Among his mentors Blake counts former AKC president Ron Menaker as well as the late long-time judge Joseph Joly, and Gene Zaphiris and the late Matthew Stander of Dog News, where his candid show photos make a frequent appearance.

Living down the street from Frank Sabella for many years, Blake drew inspiration from the legendary handler and judge.

“He looked at dancing and handling as the same thing: You have to go out there and put on a great performance,” Blake remembers. “He taught me that it's a lot of work and stress and dealing with people, but you just have to be able to do it with class and dignity and always handle yourself well.” 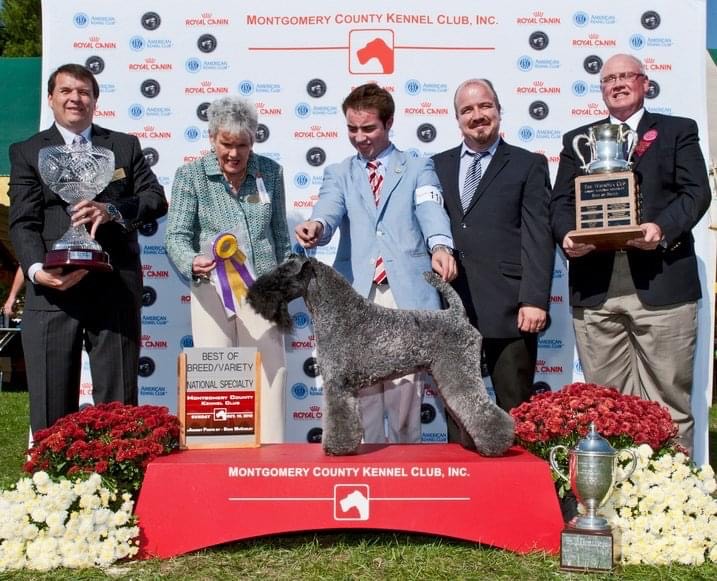 Growing up, one of Blake’s favorite events was a local Junior Jamboree, “and there were at least 10 kids in my age group who started showing dogs because of it,” he remembers. When he realized that event no longer existed, Blake created his own: Every summer for the past six years (except, of course, for pandemic-plagued 2020), Blake has run a Junior Jubilee in conjunction with the Tampa shows. Some 200 kids attend the free event, which features top handlers, vendors and giveaways.

During his time in Juniors, Blake was the top Terrier Junior as well as the top Junior in Florida. Now a junior showmanship judge himself, he has judged at such high-profile shows as the Garden, the AKC show in Orlando and the 4 Summer Night shows in Split, Croatia.

At the latter – which is held after sundown on a sparkling beach – Blake noted that many of the juniors actually bred the dogs they were handling.

“That's what we’re getting away from here in the U.S. – breeders are more important than handlers in my eyes,” he says. “It’s awesome to win on a client’s dog, but when you win on your own dog, it means a lot more.” 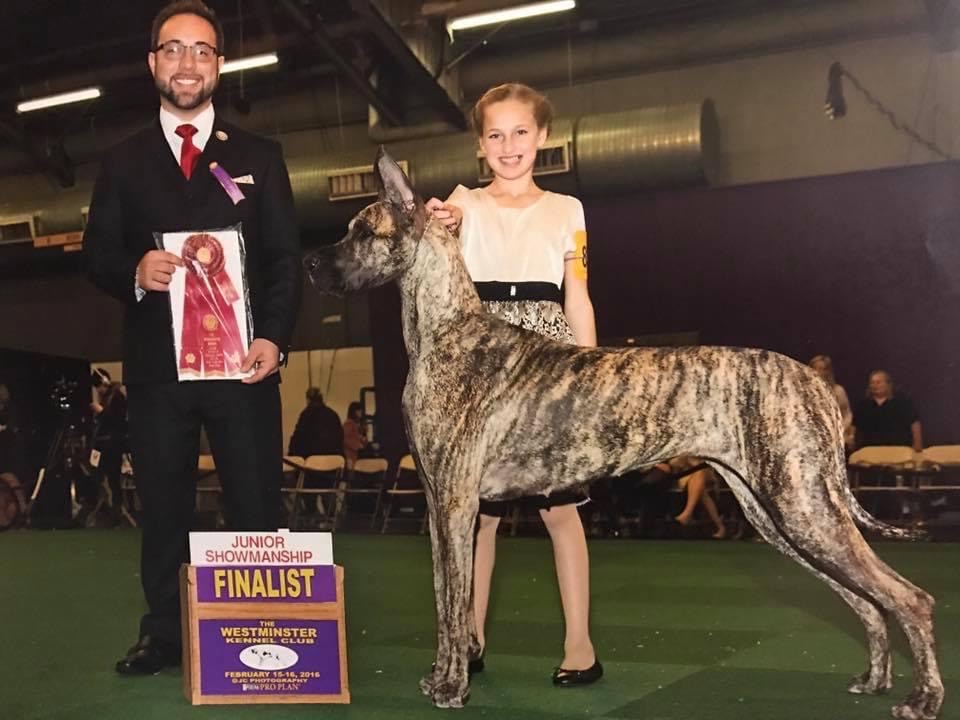 On his visits abroad, Blake came across Botaniqa, a popular dog-shampoo company in Poland that didn’t have a distributor in North America; now he will be undertaking that role before year’s end. To utilize his down time during the pandemic, he also signed up for business-management classes to complete his MBA online.

“I enjoy handling, but hopefully I can branch out into other things,” he says. “No matter what their age, a lot of people don't think outside the box, and there’s a lot more to the dog world than showing dogs.” 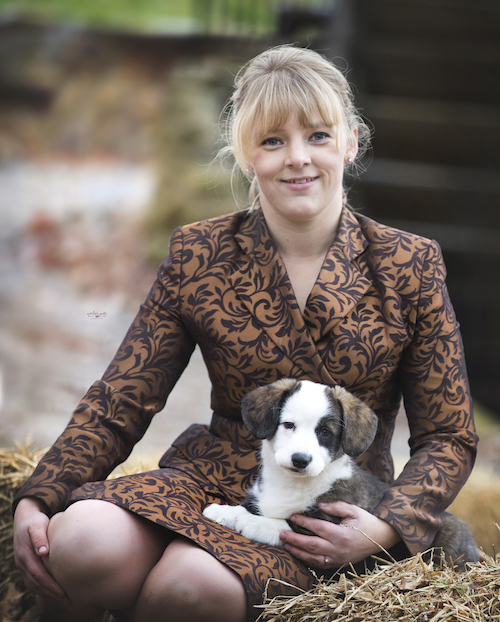 M’Kayla Stahr started off in dogs as a little kid with a big-picture view – literally. Hoisted up into the saddle during hunt tests, she watched her grandparents’ Vizslas do field work, scanning the open fields for those elusive quail.

M’Kayla started showing in 1998 as an 8-year-old, and always knew she would become a professional handler – a certainty that was driven home when she began to work for Linda Williams. M’Kayla spent all her school breaks with Linda, in addition to meeting her at shows throughout the year, and graduate from high school a semester early to work for her before going off to college.

“Linda didn’t just teach me the basics,” M’Kayla says, “but she helped me polish my handling, grooming and care on double-coated breeds. And she taught me the business side of being a professional handler – managing the kennel, talking with clients, billing and more.” 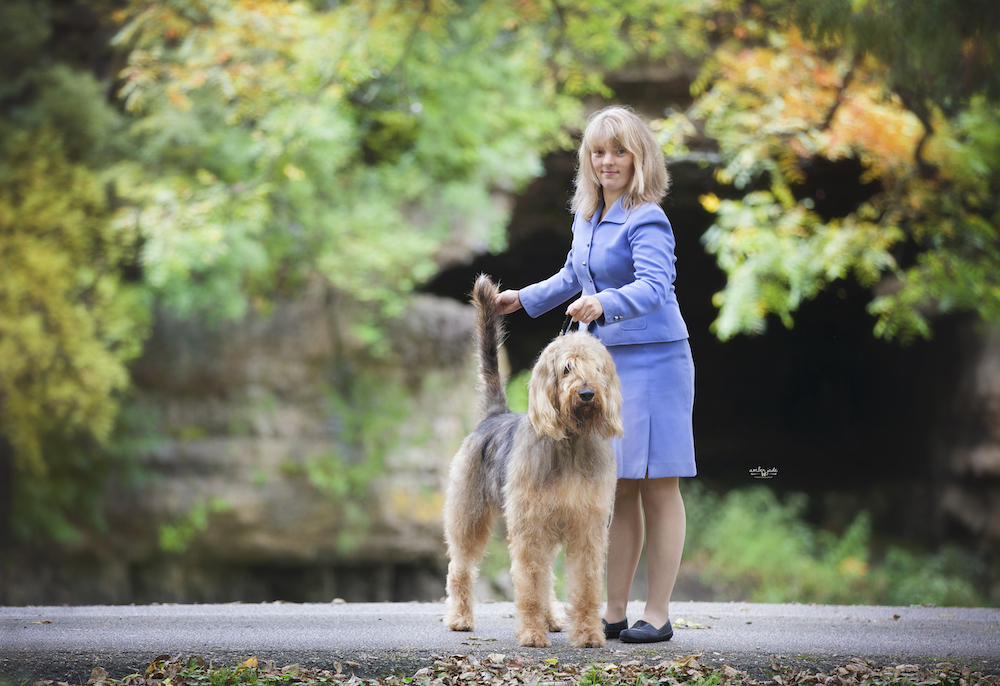 M’Kayla takes a decidedly old-school approach to her clients, calling them at the end of each day to give them an update on how their dogs did rather than making catch-all posts on social media.

Linda was also responsible for igniting M’Kayla’s interest in Herding breeds, as she handed a lot of them. “While Pembrokes were her main breed, she owned a couple of Cardigans,” remembers M’Kayla, who sort of “fell into” that breed as a result. “They’re very funny, very smart and a great family dog, all combined into one package.”

M’Kayla’s other breed is the German Shepherd Dog, an intimidating prospect for many just in terms of the sheer energy of the ring and the competitiveness of the handlers. That said, “I think now there are now more up-and-coming young people in Shepherds,” M’Kalya reflects, “where for a while there weren’t.”

M’Kayla’s mentor in that breed is Gerald Roach, who in his 40 years has bred multiple Best in Specialty winners, a Best in Show winner with limited breeding. “He has mentored me in structure, movement and long-term conditioning,” she says, “and has a vast knowledge of dog behavior and working with difficult dogs, which has allowed me to work with clients’ dogs with behavioral issues.”

What Gerald and Linda have in common, M’Kayla says, is their attention to detail – “detail over the dogs’ health, care and grooming.” 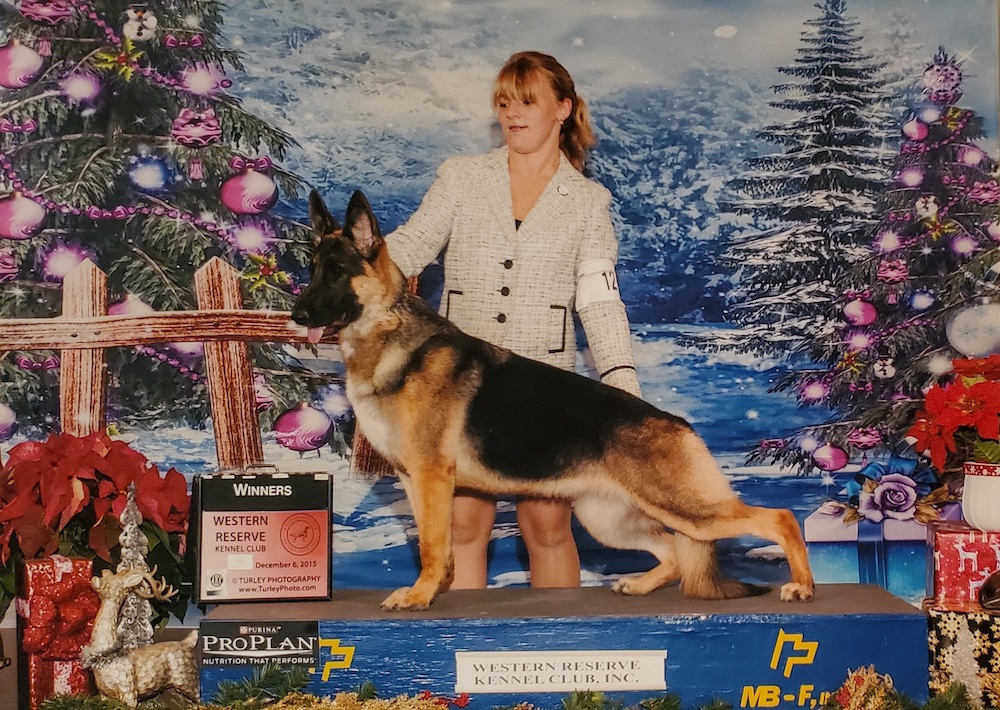 M’Kayla thinks her biggest challenge is one that all young handlers face: Convincing seasoned exhibitors to put their trust in them with their top picks.

“There been instances where one of the bigger-name older handlers I’m friendly with will ask me to cover a dog if they have a conflict, and the owners kind of look at you like, ‘Are you able to do this?’” she says. “It’s a trust thing. Sometimes it works out really well, and it’s nice to experience those moments when you’re told how great the dog looked, or that something went really well.” 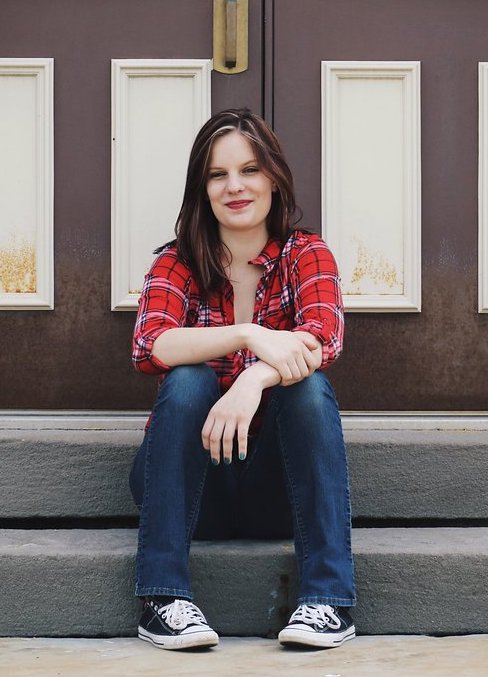 At just 21 years old, Liz is one of the youngest full-time professional handlers in the sport, but she’s spent virtually all her life amid the buzzing of hairdryers and rattling of crates.

Liz’s parents met at a dog show: Her father Jim Edgerton bred Basenjis under the Edgie’s prefix, and Liz now continues the Cebar Greyhounds that her mother Dani and grandparents bred before her. Liz’s first foray into the ring was in a pee-wee class at a UKC show. As a 4-year-old, she made her AKC ring debut bringing a Basenji bitch back in for reserve – and promptly won. “I don’t remember it, but I’ve seen the pictures, so I know it happened,” she laughs.

Liz’s grandmother originally had Afghan Hounds, and when Liz was 12, her parents relented and let her get one. “They had no-hair breeds because they didn’t like grooming,” she admits, but the universe soon provided some guidance: Her mother’s friend and a fellow attendee at training class, Briard breeder Kathy Lanam, showed Liz how to groom and trim, becoming an important mentor along the way. 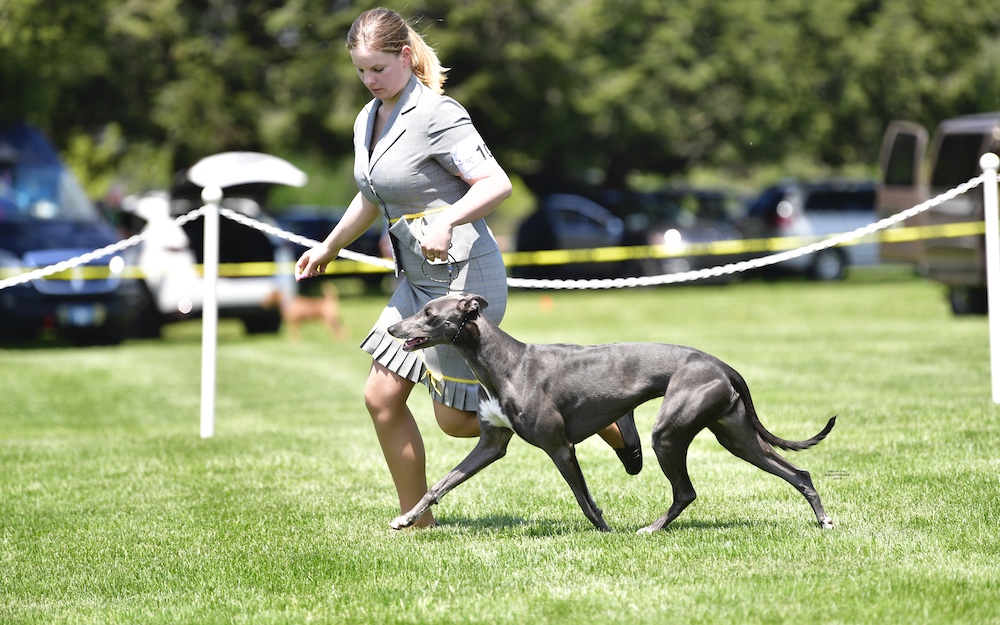 “It was definitely nerve-racking at first,” she admits. “I never really understood all that went into it –  talking to clients and bringing them in. That was definitely a learning curve.”

While learning the business end of the job came as something of a surprise, the satisfaction and excitement Liz felt as a younger watching handlers present their dogs in the ring felt all too familar.

“I love being in the ring. I love it being me and the dog, and knowing I’ve done everything to get there,” she says. “It really starts with the care of the dogs. I love being the one who builds their character up in the ring. You start with a blank slate and you just work with them, and allow them to be who they want to be.”

Strategically located within 10 hours of dog shows that are as far afield as Michigan, New York and Kentucky, Liz says she has had to travel much farther during the pandemic, and has gone to many shows that she’s never been to before. 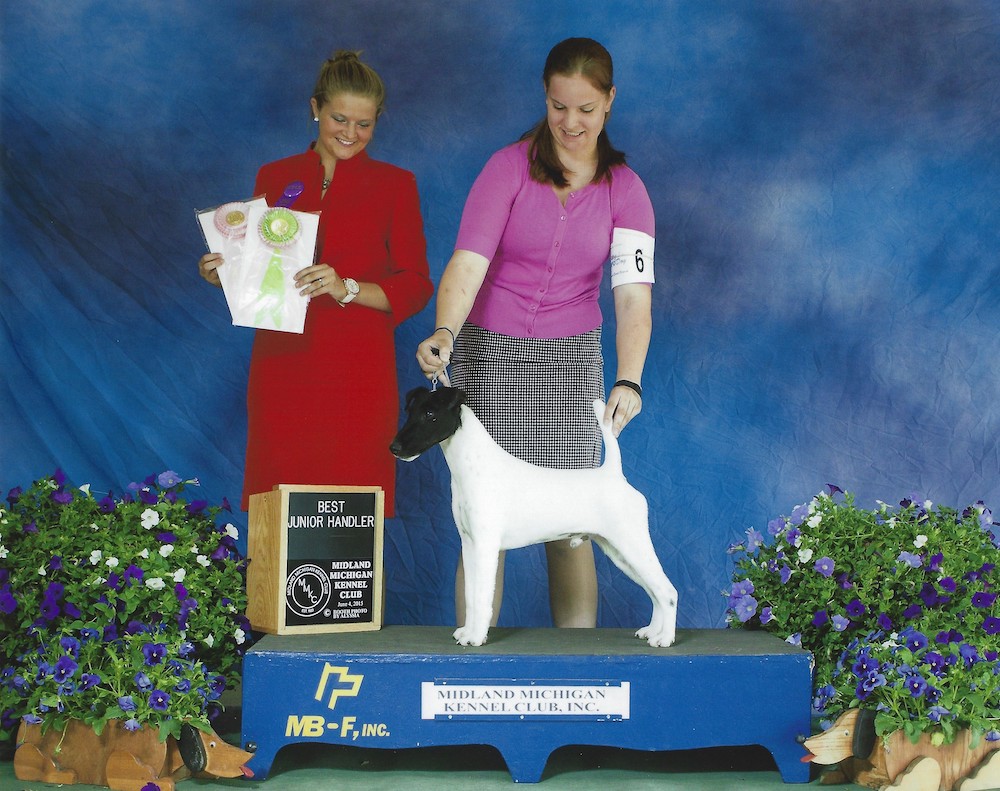 While Liz says clients typically don’t balk at her age, some of her fellow handlers do – and she understands why. “There’s this perception that people my age lack a work ethic – and there is truth in that,” she says. If anything, then, Liz is the exception that proves the rule: In addition to attending dog shows almost every weekend before COVID hit, Liz also works at as a groomer at her mother’s pet store.

“My mother owns three businesses – the pet store, a doggie day care and a raw-food processing plant,” Liz says. “I was always taught, never stop until you get what you want.”

Check Out the other 30 Under 30s We've Highlighted:

© Dog News. This article may not be reposted, reprinted, rewritten, excerpted or otherwise duplicated in any medium without the express written permission of the publisher.
Fri, 11/06/2020 - 3:38am