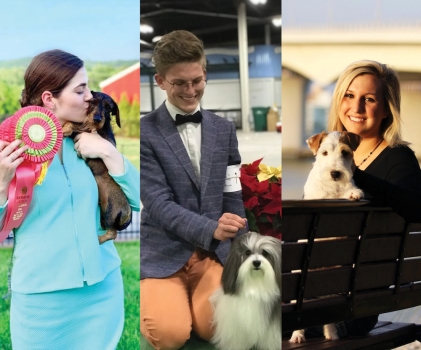 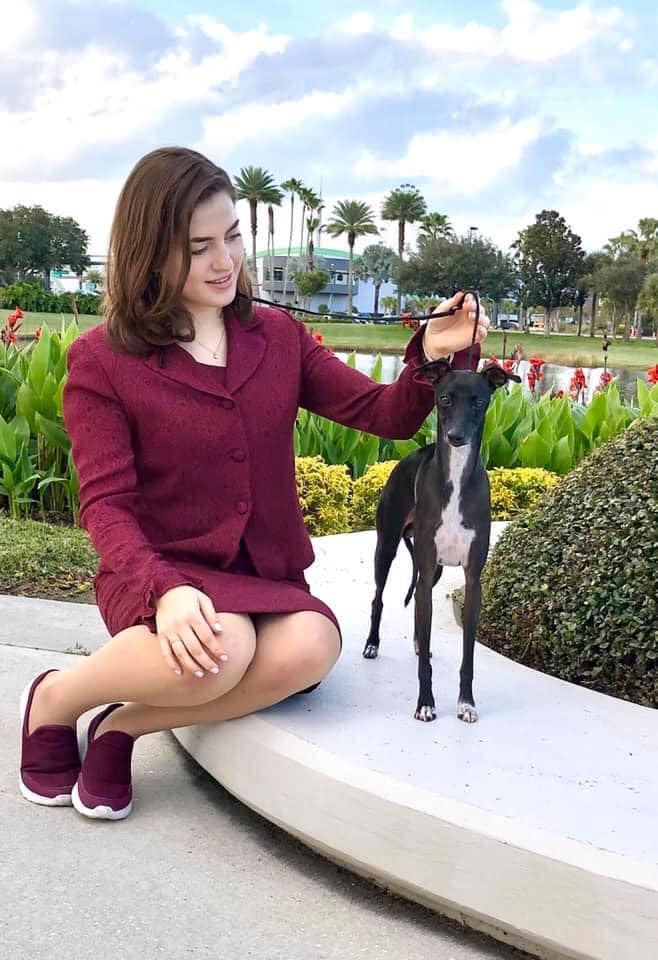 With Olivia Persinger and her older sister Meredith, dogs are a case of sibling revelry, not rivalry.

When Meredith obtained her first Italian Greyhound at the age of 12, Olivia was a kindergartener. But all it took was 5-year-old Olivia showing one of Dr. June Cohron’s Dachshunds at a match for her to get hooked. Saving up her money, Olivia purchased her first Dachshund at age 9 from Dr. Cohron, and has been involved in the sport “non-stop” ever since.

While co-breeding IGs with her sister and working on her own family of Wirehaired Dachshunds – they use the kennel prefixes Selah and Largo, respectively – Olivia got involved in her third breed about seven years ago. Noticing a Belgian Lakenois exhibitor with a bad back struggling to unload her car, Olivia lent a hand and helped the woman show her dogs that day.

“I saw how much that breed loved her – they’re incredibly loyal,” Olivia says of the connection between that longtime Lakenois breeder, Lou Anne Craft, and her intense Belgian herders. “Every time those dogs walked in the ring, I could tell they were in love with their handlers.”

While Craft passed away a couple of years ago, Olivia is continuing in the breed that her mentor taught her so much about. 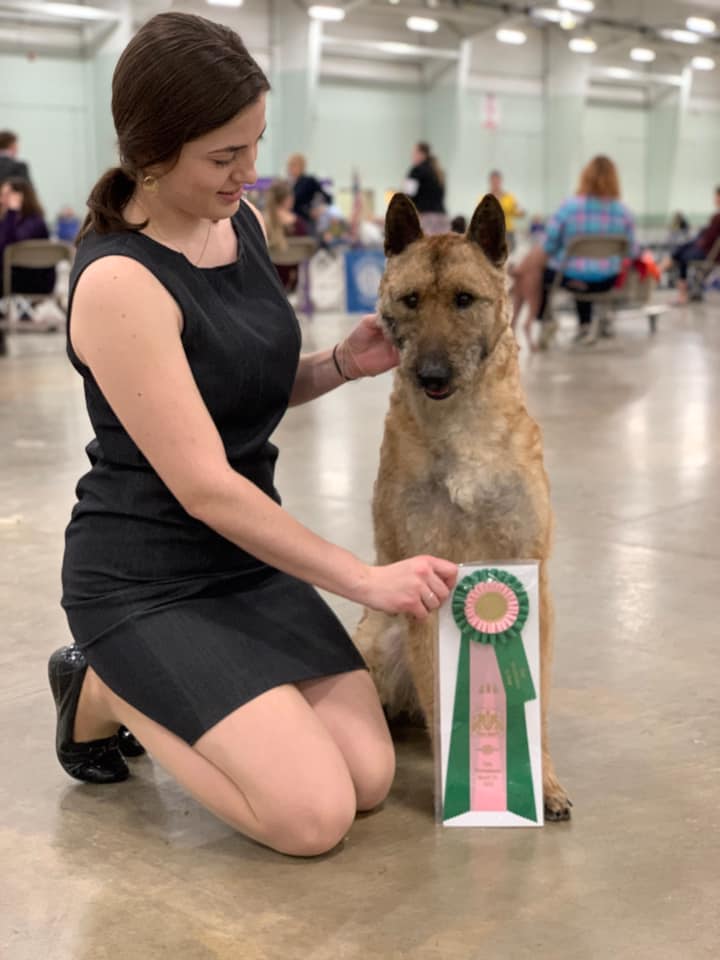 While her sister Meredith, who is seven years older, is an avid breeder-owner-handler, Olivia opted to go the professional route, working as an assistant for handler and fellow Dachshund breeder Angela Lloyd.

“I have never had a greater teacher than Angela, even in college,” says Olivia, who is currently in her freshman year at Baylor University in Texas. “The first thing that got ingrained in my mind was ‘You’re here for dogs, they are not here for you.’ You need to love it because of the dogs – don't love it because of the ribbons.”

That dovetails with her advice for Junior handlers. “Don't take for granted the moments you have in the ring,” says Olivia, who won the Junior Showmanship competition at the AKC National Championship in 2018. “Remember the memories you create with each dog, and don’t use your dog as an object.”

On the breeding side, the fact that Olivia has yet to enter her 20s has presented its share of challenges. “There have been quite a few times when people have not wanted to work on a breeding because they were worried about why I was doing it,” she admits. “Thankfully I found the right people who believed in me and gave me an opportunity. I’m actually thankful for those other people – they just push you to work harder to find what you need.”

Olivia hopes one day to become a professional handler, but for now she is pursuing a clinical science degree with prelaw track at college, and has a 10-year commitment with the ROTC. Being a professional hander “is not something I want to rush into,” she says, adding that a decade more experience as an assistant while she hones her breeding skills suits her just fine. 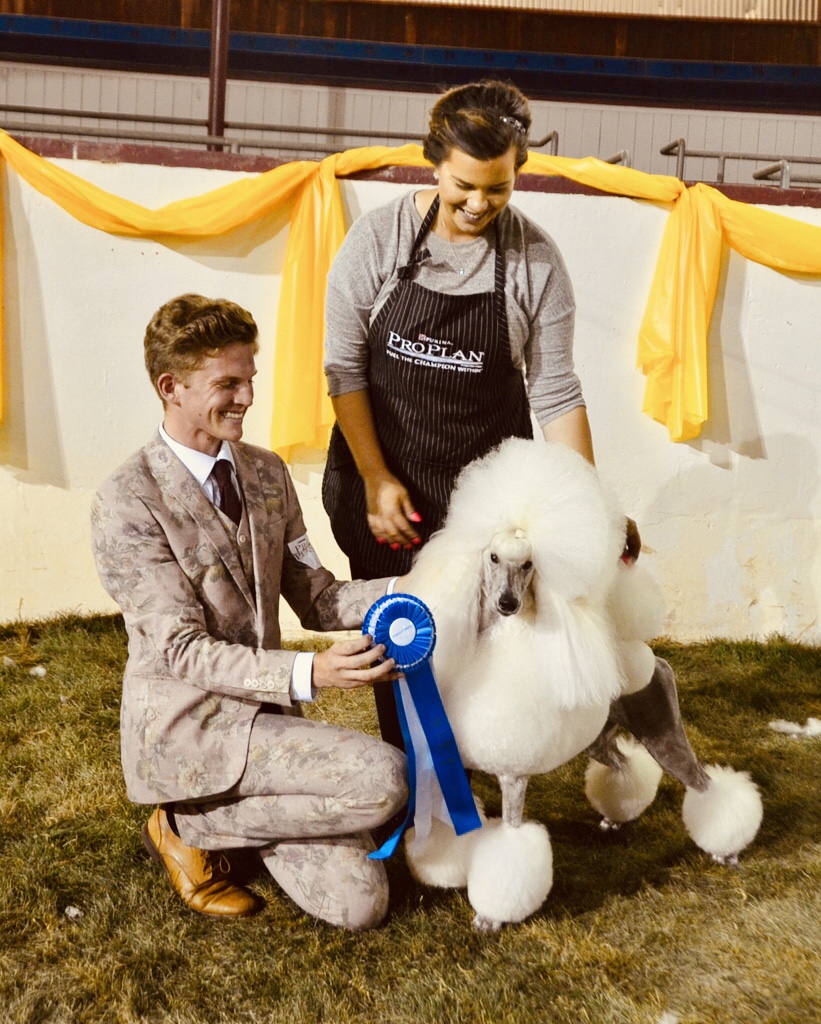 It’s a textbook scenario, replayed at dog shows across the decades: A family acquires a purebred dog and, encouraged by the breeders, starts attending dog shows.

This is how Ethan Coye found his 13-year-old self at a Southern California show where his stepmother’s French Bulldog was being shown. The dog’s breeders also bred Cane Corsos and, in the ringside rush, they asked him to hold one – then promptly forgot all about him.

“I sat there for three hours with that dog,” Ethan remembers, the well-behaved male sitting obediently at his feet the entire time. “I watched Juniors, and it looked like a lot of fun.”

Ethan was keen to compete, but the breeders didn’t have a suitable Frenchie, so he took in a Cane Corso instead – much to the chagrin of some judges who did a double-take at the imposing dog at the end of his lead. “A bunch of them were very questionable about the breed,” he remembers. “It was sort of ‘Yikes, who sent this kid in here with this dog?’”

That resistance only made him try all the harder, and in the end Ethan became the only Junior to ever show a Corso in Westminster’s Junior Showmanship competition.

While frequenting dog shows in California, Ethan met the McFadden family. “I thought, ‘I would love to work for them,’” he remembers, sheepishly adding that he had no idea of their stature in the sport – or that they lived on the opposite end of the state, in northern California.

When the McFaddens invited him to help out at Woofstock, Ethan took a seven-hour train ride to meet them at that hippie-inspired show outside of San Francisco.

“From that dog show on, I made that my place – it was like, this was where I needed to be,” Ethan says. He joined the McFaddens as a live-in assistant, studying independently and driving down to southern California every Wednesday to check in at his high school, where he graduated early.

Last year, Ethan traveled with Taffe McFadden as she campaigned to make Bono the Havanese the nation’s number-one dog. “What surprised me was how much work and dedication are needed to become top dog – it’s not just running clockwise in circles,” he says. “It takes a lot of planning, and the uncertainty of ‘Will this work out in our favor?’ was so thrilling to me.”

When Taffe’s other special, a Norwich Terrier, also won the group, Ethan would take the dog in, earning his first Best in Show along the way. “The trust that came with that, the amount that Taffe believed in me – I never thought I would be where I am now.” 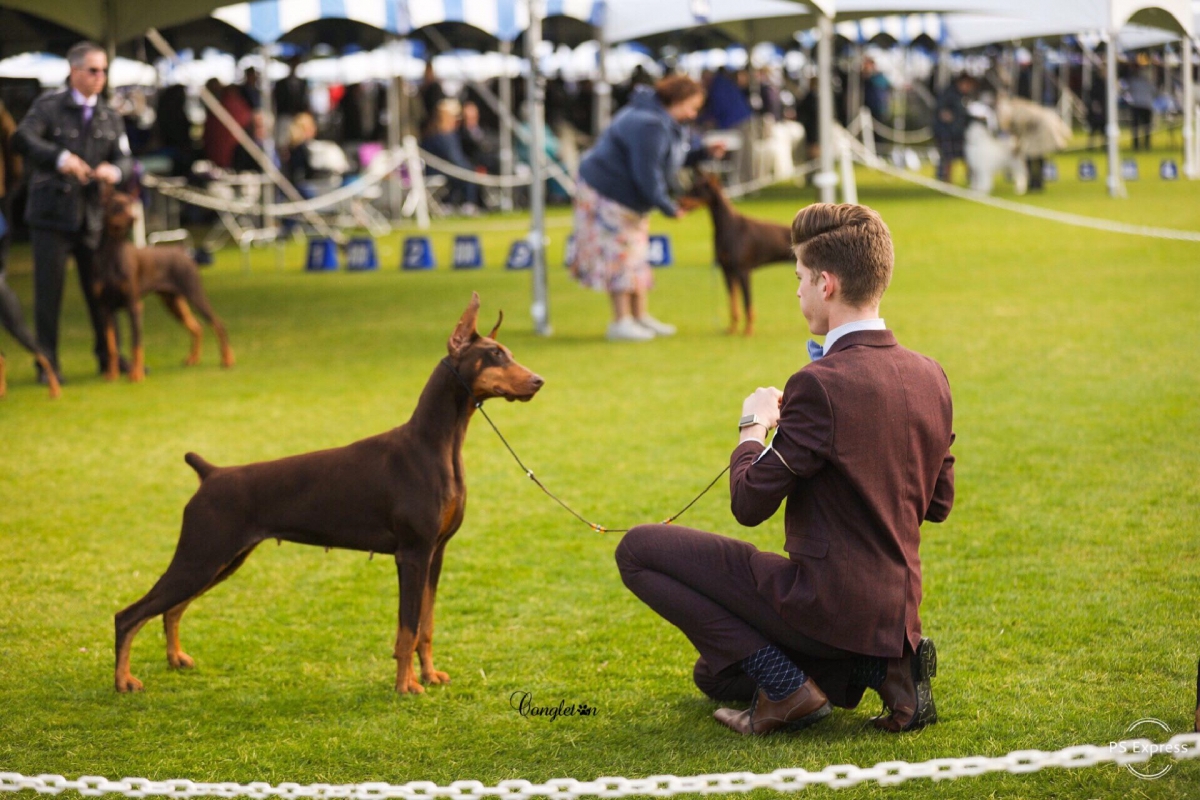 In Ethan’s last year of Juniors competition he acquired a Doberman from Michelle Santana, with whom he has since co-bred two litters. The bitch had not been particularly enamored of the show ring, and he worked diligently to transform her from a green dog that didn’t know ring basics to an unflappable show dog that would stand like a statue while he dropped the lead and knelt before her.

Their performance so impressed a well-known Doberman handler that he offered to buy her on the spot as his next special.

Ethan kept the bitch, but treasured the compliment. 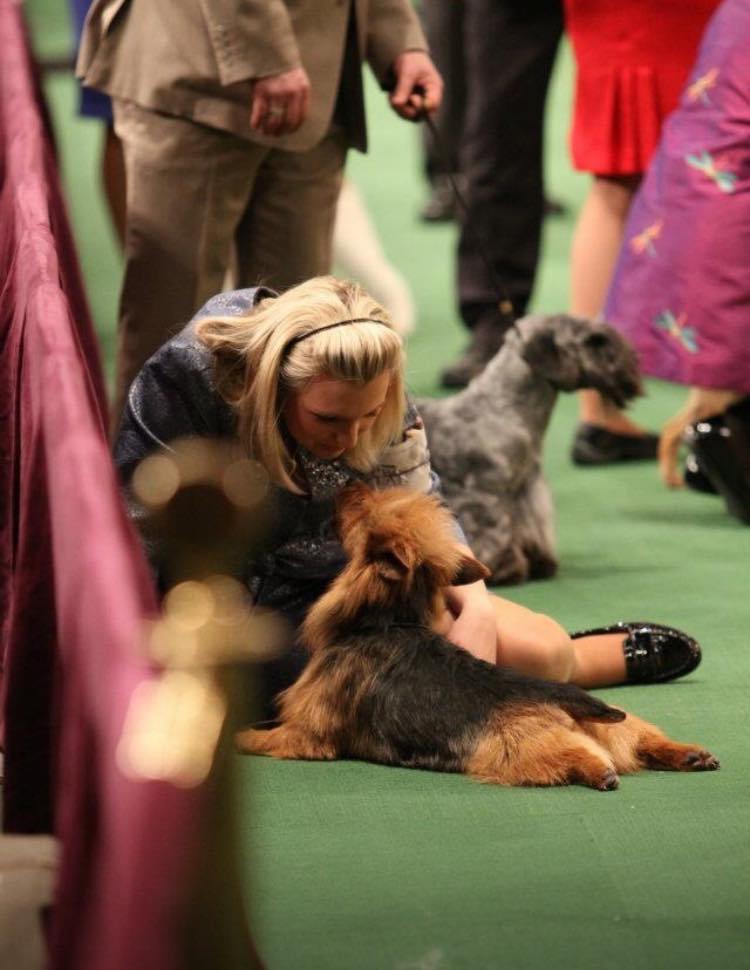 Though Kellie is only in her late 20s, she’s been in dogs long enough to remember when Parson Russell Terriers were still called Jack Russells.

“My mom showed horses growing up with barrel racing, and I was very interested in getting involved when I was about nine years old,” she remembers. “Of course, we lived in the city, so having my own horse was not feasible.” Soon after, the family brought home their first Parson, and before she knew it, Kellie was involved in 4-H and then AKC Junior Showmanship.

“Nearly 20 years later, I’m still as in love with the sport as when I started,” she says, and in many respects she has come full circle: An AKC Junior Showmanship judge, Kellie will be judging Junior Showmanship preliminaries at the AKC National Championship show in Orlando this month.

And the new year will see her returning as a full-time handler. “I enjoyed watching the unique bonds develop between the handlers I worked for and their top-winning specials,” she says, ticking off an impressive list of mentors that includes Jane and Greg Myers, Rindi Gaudet, Larry Cornelius, Marcelo Veras, and Bruce and Tara Schultz.

“The earliest and most important lesson I ever learned was that the dogs’ care comes first, no matter what,” she says. “If you are hungry after a long day – guess what? The dogs are, too! We are our dogs' advocates, and they rely on us to provide them with the love, care and attention they deserve.”

Kellie’s most memorable dog moment was in 2010, when she flew to South Dakota for the Australian Terrier national with her male special, who later became the top winner in breed history.

“I had just turned 18, it was my first trip alone, and I was honored to win the national under the late Ms. Michele Billings and went on to win a large Best in Show the following day under Mrs. Barbara Alderman,” she says. “The support I received from people I had never met was incredible.” 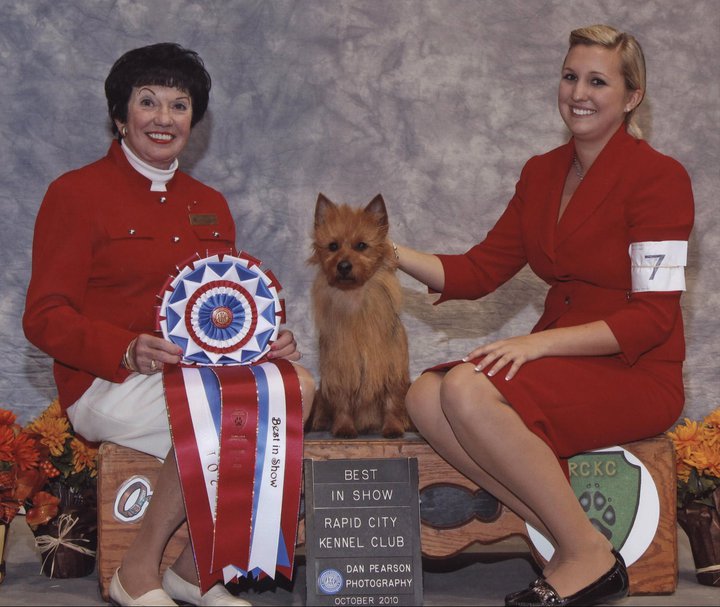 Her hope for the years ahead is to have successful breeding programs with her Australian Terriers and Parson Russell Terriers. “Both breeds are close to my heart, and both are breeds that are becoming less popular over the years.”

Given that some dog clubs are in for a similar trajectory, “I would like for more people to get involved with their local kennel clubs and breed clubs, especially younger people,” Kellie says. “Without volunteers, clubs are running out of people to help run the shows.”

Admittedly, Kellie says, times have changed since she started in the sport two decades ago. “When I was in Junior Showmanship, I lived and traveled every summer with handlers, but today some parents may not be as trusting to send their child with people they don’t know well.” Even so, she says, “there are many younger people who still want to learn and excel in the sport,” and she encourages them to be proactive in order to get the most out of every experience. “Talk to handlers and help them at shows during the day!” she advises. “The knowledge and skills you will gain are priceless.”

© Dog News. This article may not be reposted, reprinted, rewritten, excerpted or otherwise duplicated in any medium without the express written permission of the publisher.
Tue, 12/01/2020 - 10:13am