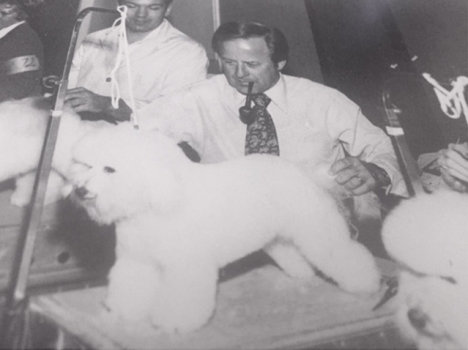 Saying goodbye to a long-time pro handler and Bichon breeder

Word has reached Dog News that Joe Waterman of Perris, California, has passed. A long-time handler based on the West Coast, he was the 2017 inductee to the prestigious Anne Rogers Clark Hall of Fame.

Joe, pictured here with his ever-present pipe, was one of the first people to breed and show Bichons Frises years before the breed was recognized. He and his then-wife, Pauline, along with others, including Richard Beauchamp and Barbara Stubbs, helped get the Bichon recognized.

Joe showed the first Bichon bitch, Ch. C & D Beau Monde Sunbeam, to go Best in Show in 1974 at the Longview Kennel Club under Winifred Heckmann. The Watermans handled the first Bichon Frise national-specialty winner, Ch. Vogelfligh's Music Man."Joe showed lots of Miniature Pinschers. He was a very respected handler and in those day more of the handlers got along than they do today," remembers judge Johnny Shoemaker. "He met and married Dornine, and he was so lucky to find her, and she him. They made a wonderful couple and you could see the love they had for each other.

© Dog News. This article may not be reposted, reprinted, rewritten, excerpted or otherwise duplicated in any medium without the express written permission of the publisher.
Sat, 05/30/2020 - 11:26am