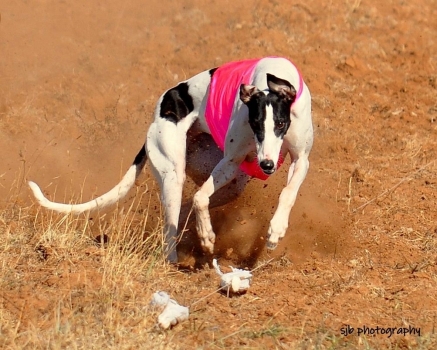 Faster Than a Speeding Bullet

But Greyhounds are versatile, too
By
M.J. Nelson

Well, maybe not quite as fast as the old “Superman” promos used to say. But if you are talking about swift dogs, Greyhounds definitely qualify as “superdogs,” reaching speeds up to 45 miles per hour.

Putting that into a bit of perspective, in the 94 years that the Belmont Stakes have been run at a mile and a half for thoroughbred racehorses, the great Secretariat hit 49 mph in his record-shattering run of two minutes, 24 seconds, and he was something of a freak: At his necropsy, it was discovered that Secretariat’s heart was almost twice the size of a normal thoroughbred’s heart. By contrast, the fastest that Usain Bolt – generally acknowledged as the world’s swiftest human – ever ran in competition was 27.8 mph.

But according to the people who own them, Greyhounds are much more than pure speed. They can also be successful in a wide variety of dog sports besides those that place a premium on running a hole in the wind.

“Their athleticism is a big help in many sports,” says Cindy Sisson, whose current Greyhounds are Caddy (DC BIF Lakilanni Pink Cadillac SC FCh JSR) and Tux (Ch Fleetfield Suntiger Silver Ghost CD BN RE TCP JSR). “I have been successful with my Greyhounds in rally and obedience as well as coursing events. They are designed to be excellent at coursing and racing, but their athleticism makes the jumps in obedience and agility easy for them.” 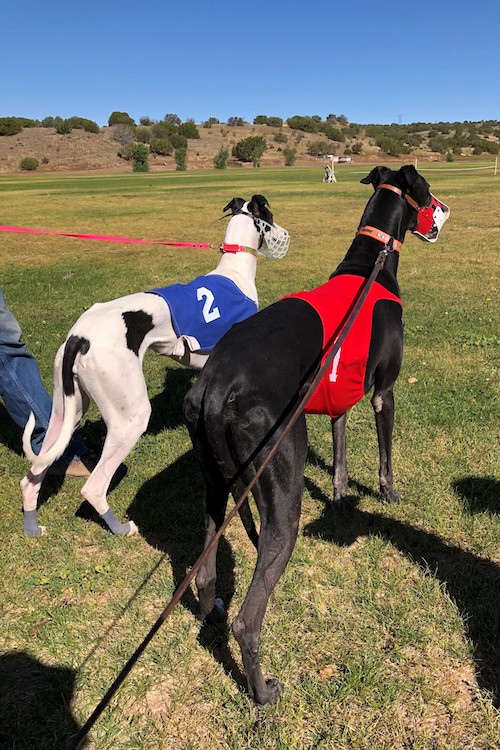 “They’re not high energy and are very sensitive, so it takes the right touch to train them successfully,” she explains. “I’ve found the easiest ones to train are those that are food or toy driven, and I’ve also found that less is more in training. Greyhounds do NOT like a lot of repetition. If they do something correctly, I stop, praise and move on to something else. I’ve had dogs shut down when I try to repeat exercises too frequently. I’ve also learned that having two dogs being trained at the same time helps tremendously. Jealousy is a powerful motivator.” 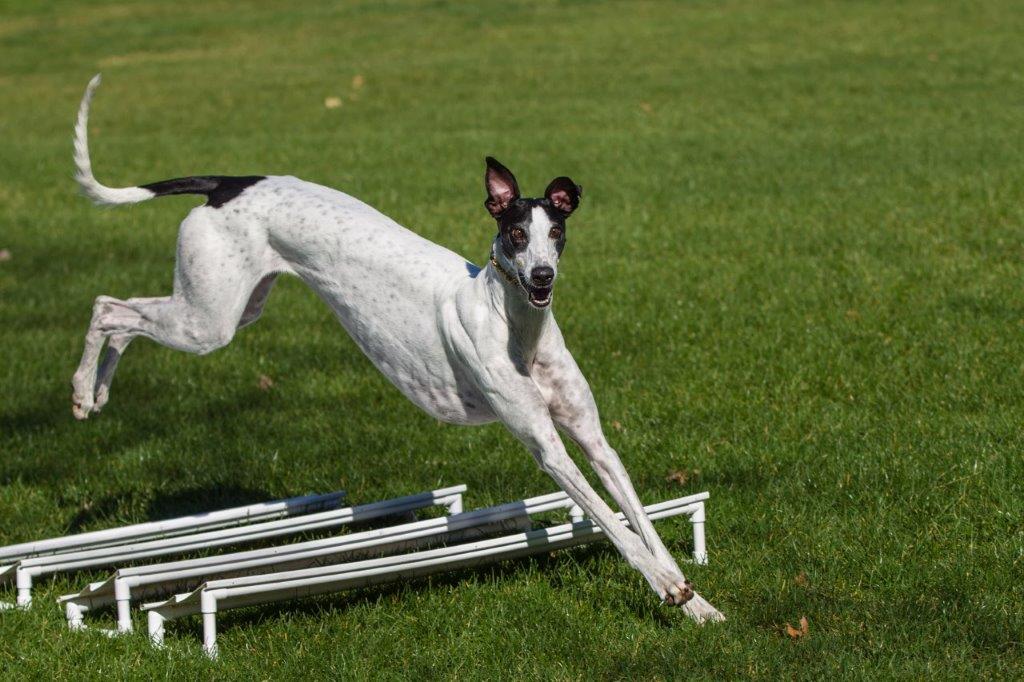 Heather Minnich adds that the breed is smart and actually is fairly easy to train, as they like to please.

“They can and have excelled in agility, obedience, rally, nosework, barn hunt and tracking, to name just a few sports other than their historical activities of coursing or racing,” says Minnich, whose current Greyhounds are Bayou (UKC CCM GRCH, AKC GCH DC Lakilanni Halfmoon Bayou FCH, RATI), Starlette (BII DC Lakilanni Highway Star FCH) and Brickle (U-Ch DC GCh Lakilanni Brick House FCH.). “My dogs love to run, and I’m sure if they could talk, they would say they’d much rather go to a field trial, race meets or hunt than a dog show and, to be perfectly candid, so would I. But they even like biking, running or walking with me, as they really seem to like being around people.” 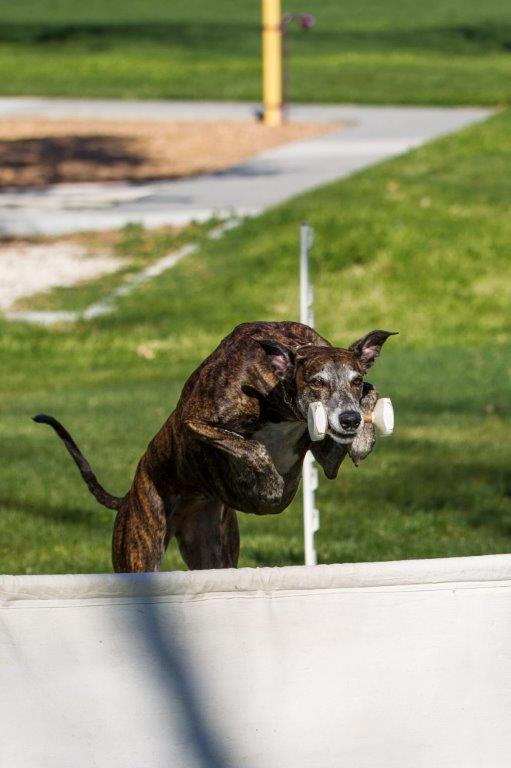 There is no doubt that Greyhounds were meant to run. From the time they began to appear on paintings on cave walls in Mesopotamia or pyramid murals in Egypt, they have been depicted in various art forms at full gallop in hot pursuit of some quarry. Indeed, the breed is one of the oldest domestic dog breeds, dating back more than 8,000 years. In both Greek and Roman mythological art, the ancient gods and goddesses are often shown with Greyhounds. But it was not until the Tudor Era in Great Britain, when the eccentric Horace Walpole, Earl of Orford, set out to create the perfect Greyhound, that the modern Greyhound began to emerge.

To say that Walpole was eccentric is being diplomatic. His detractors said he was “quite mad.” His “madness,” however, did not stop him from achieving immortality in the world of coursing when he began an experiment crossing Greyhounds with Bulldogs, which, in the 18th Century, did not look like the Bulldogs of today. The results of this experiment were exceptionally high-quality dogs that were much in demand and were the basis for today’s Greyhound.

While it is possible that the breed first came to America with Christopher Columbus, it was mainly European immigrants who introduced the breed in North America. The Midwest with its open spaces that were overrun by jackrabbits was ideal for Greyhounds, and thus for the sports of coursing and racing. Indeed, George Armstrong Custer is said to have coursed his 14 Greyhounds on the day before he and his entire command were wiped out by Sioux and Cheyenne warriors commanded by Chief Sitting Bull. Fortunately for the hounds, Custer sent them off into town instead of taking them along on his quest to surround Sitting Bull’s encampment on the banks of the Little Bighorn River. With the invention of the artificial lure, Greyhounds became the dominant breed in coursing and racing in the United States. 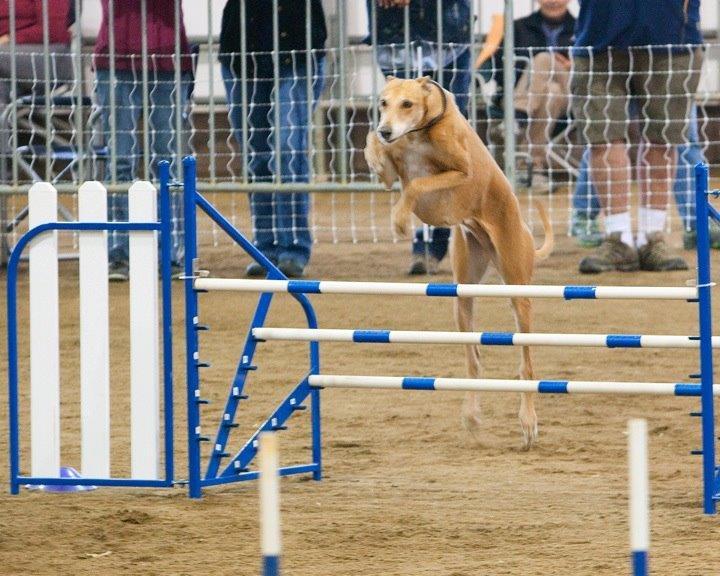 Sisson says that it has become apparent to her that some of her Greyhounds need to run in order to stay happy.

“While my dogs have benefitted from everything I’ve done with them, being able to run full-out after a lure is so good for their mental health,” she says. “But something I had to learn the hard way was to be careful letting my dogs free run prior to events. This is a wonderful breed, but they are overpowered, and they can break themselves so easily. The dog that’s my current rally dog has managed to sheer off three different nails at the base, two while chasing jackrabbits and one while lure coursing. My dual-champion bitch Caddy managed to jam a stick in her leg, also while chasing a jackrabbit, a week before her first open-field competition.”

So, these days, she continues, she tend to “bubble-wrap” her dogs about 10 days prior to an event. “One accidental benefit, I guess, is that I’ve had to learn quite a bit of first aid dealing with their minor and not-do-minor injuries, and I have accumulated an impressive first-aid kit. These days treating human injuries usually involves raiding the dogs’ first aid kit.”

According to Hamilton, too many people with Greyhounds do not encourage them to use their minds and are content to just go for walks with them or let them lounge about on the couch. “I’m amazed at people saying to me, ‘I never knew Greyhounds could do that or have so much personality or are such interesting dogs.’” 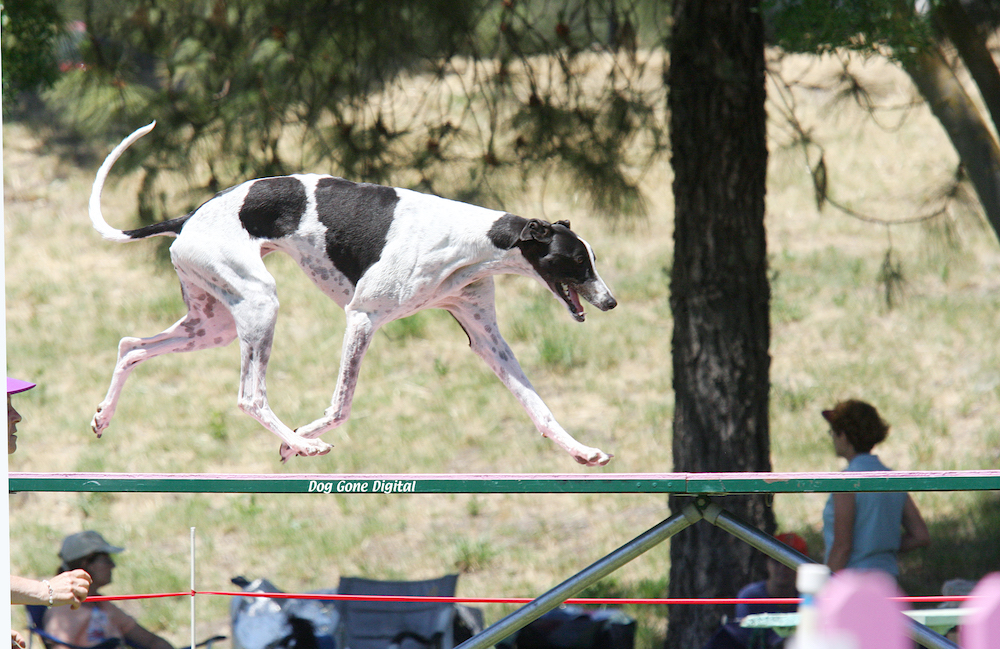 But one of the most frequent obstacles she’s had to overcome in training her dogs to do many different sports stems from the breed’s instincts.

“Greyhounds are Sighthounds, and as such, it is not instinctive with them to check with a person to learn how to do their jobs,” Hamilton cautions. “For thousands of years, their job was to chase prey, and as such, they didn’t need us to help them. Their job has been to run, catch something and return, and they’re very good at doing this. The challenge comes in trying to teach the dog how to frequently check in with a human. A good example is doing agility, where the dog and handler have to read each other continuously throughout the course.” 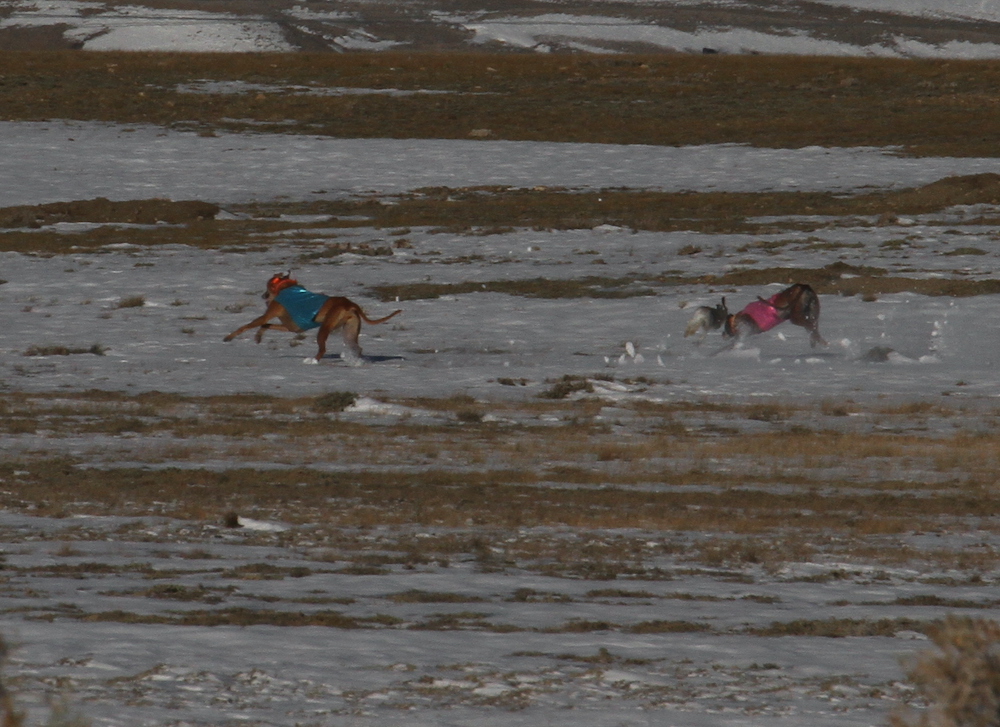 Minnich says that not enough Greyhounds get the opportunity to show their true abilities as runners. “When you get the opportunity to watch a Greyhound run, you see how their structure or form affects their speed or agility either positively or negatively. Far too few Greyhounds these days get to run after a lure or prey. It’s hard to show that form follows function if the function is never tested.”

Hamilton adds that the breed is facing two significant problems. First is a lack of people willing to do something active with their Greyhound.

“Way too many people want a Greyhound to lay on the couch or maybe go for a quiet walk with them. I think those dogs must be incredibly bored, and it is why the myth of the 40 mph couch potato persists.” 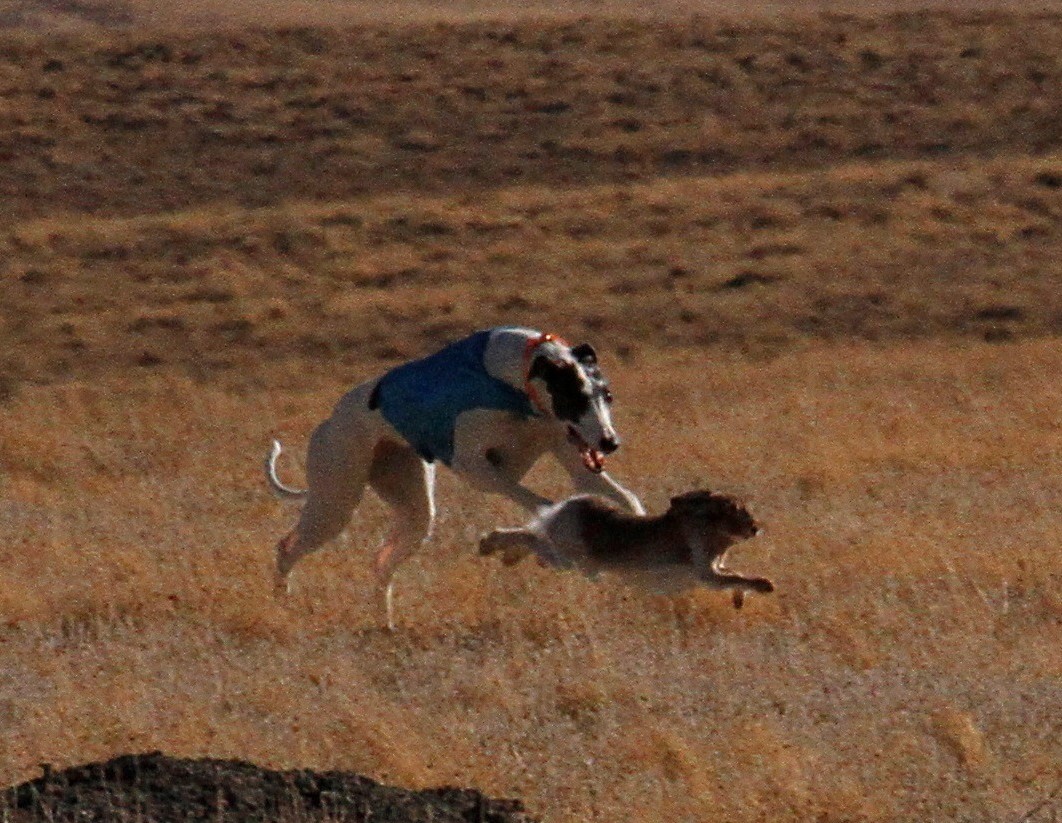 The other problem is that Greyhound numbers are decreasing, and the gene pool is getting smaller and smaller. There have historically been two different populations of Greyhounds – the AKC dogs and the NGA (National Greyhound Association) dogs, or retired racing dogs. There is very little cross-pollination between the two in terms of breeding.

“The AKC dogs have always been a small minority population of the breed, and with animal rights activists promoting no breeding, those numbers have decreased even more,” Hamilton explains. “With the closing of many of the racetracks, again thanks to the animal rightists, the numbers of NGA dogs are also rapidly decreasing. So what we’re seeing now is the rise of people breeding NGA dogs merely for the pet population with no genetic testing or accomplishments in the field or in other performance activities.  In the long run, this trend will not be positive for the breed.”

© Dog News. This article may not be reposted, reprinted, rewritten, excerpted or otherwise duplicated in any medium without the express written permission of the publisher.
Sun, 12/26/2021 - 6:28pm