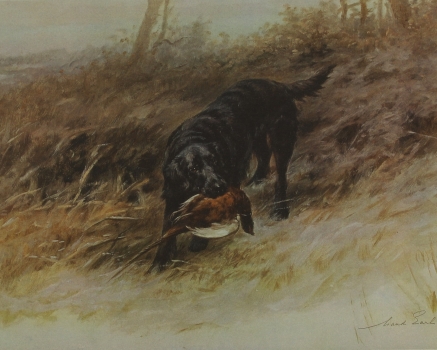 Maud Earl’s portfolio “The Sportsman’s Year" featured an assortment of hounds and gundogs.

Rising to the Challenge

The physical constraints caused by the pandemic may have made it more challenging for salerooms to source goods and put on live events, but the ever-resourceful art and antiques world has risen to the challenge. A large number of auction houses are reporting more interest than this time last year.

While internet bidding has provided a rich outlet, it would be folly to think that it is all now plain sailing. A sale still needs to offer a variety of fresh, attractive and well-priced works across the board to do well, and the challenging part is locating them and persuading consignors to consign in these difficult times. 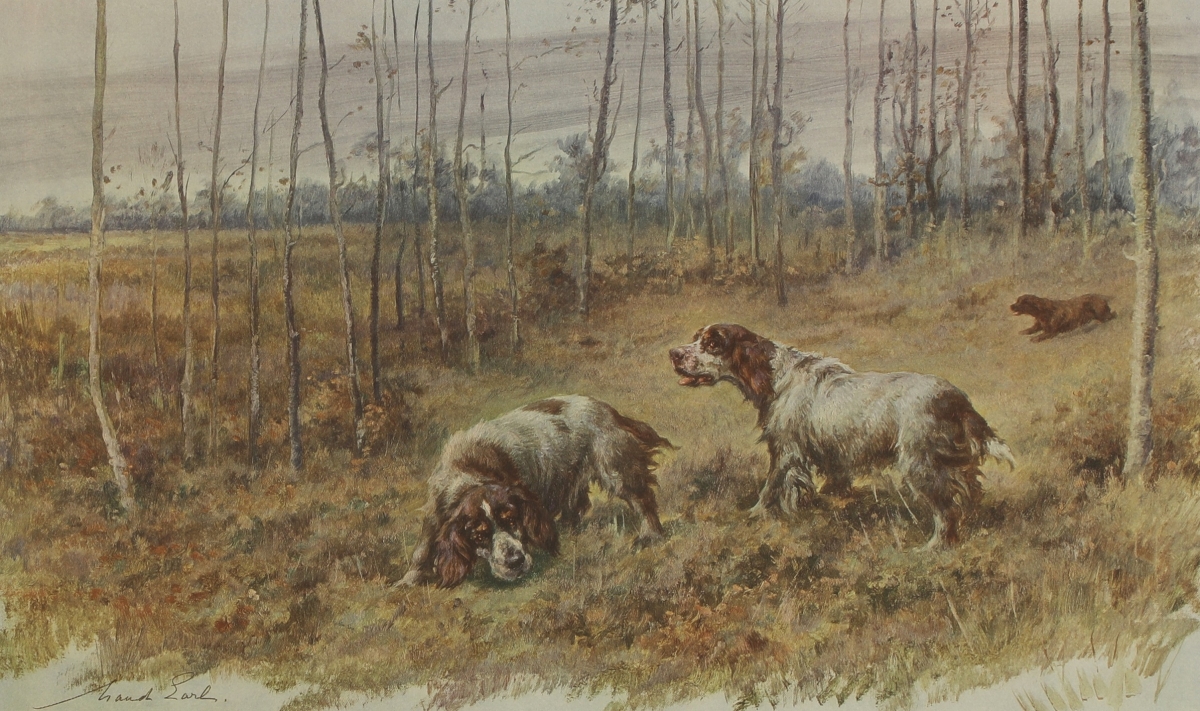 Auction house Sworders recently mounted a “Sporting Art, Wildlife and Dogs” live online sale that offered a good mix of dog pictures in the affordable price range. The bargain of the day, selling for a low estimate £680, was a copy of Maud Earl’s portfolio “The Sportsman’s Year,” published in 1906 by the Berlin Photographic Company, a publisher much favored by the artist. The portfolio featured 12 color photogravures of an assortment of hounds and gundogs (plus the Fox Terrier) – various Spaniels, Foxhounds, Beagles, Otterhounds, Pointers, English Setters, a Flat-Coated Retriever and a Golden Retriever. 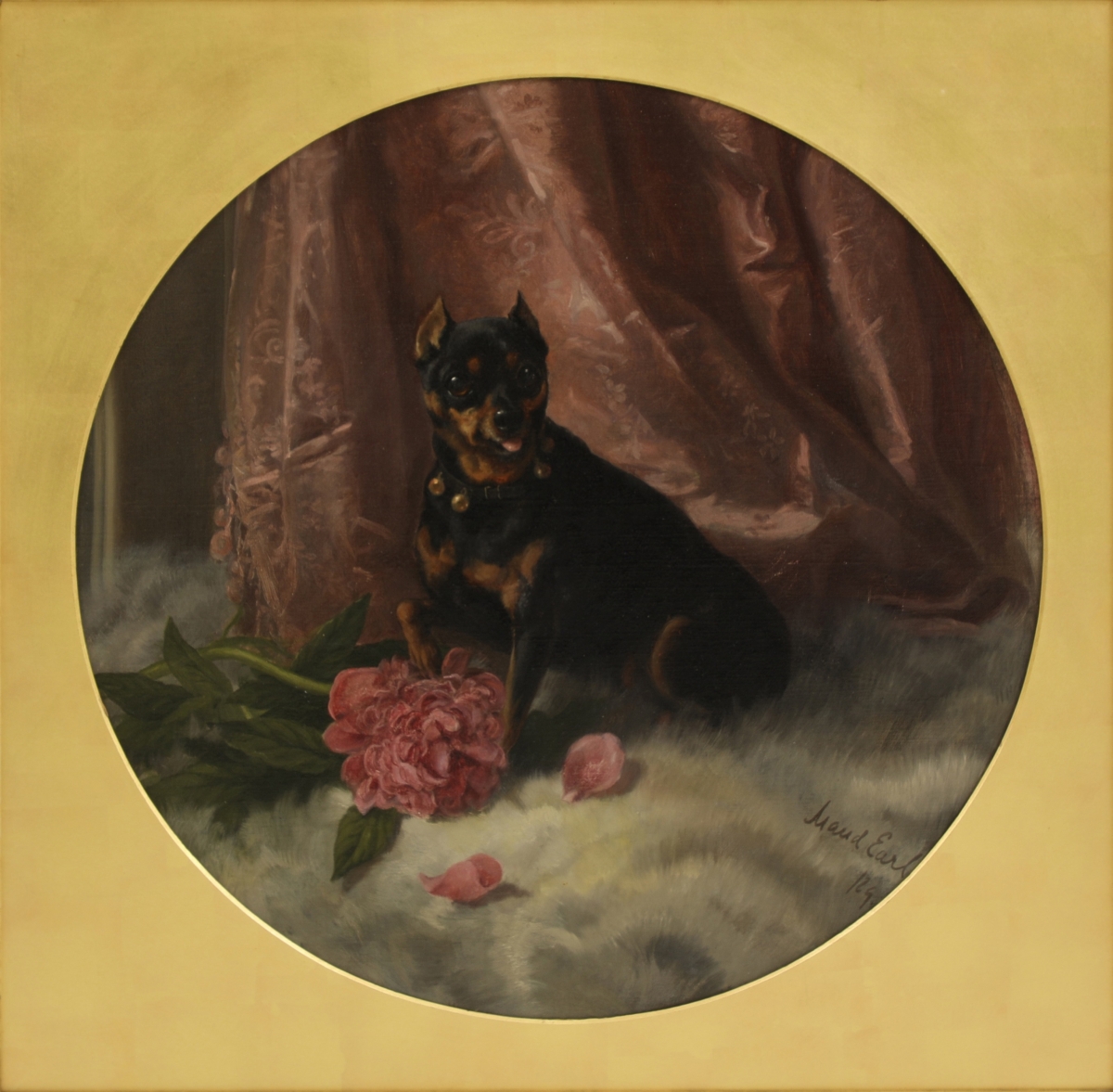 Staying with Maud Earl was a painting of a Black and Tan Terrier wearing a collar with bells attached sitting on a plush rug beside a peony with drapes behind. Selling for £620, it is one of those paintings where the breed is in the eye of the beholder – an early Pinscher, Manchester Terrier or Toy Manchester Terrier? I’m guessing the previous owner went for Manchester Terrier, as it had come to auction from the estate of the late Nerolie de Lavis-Trafford, past president of the Manchester Terrier Club, owner of the highly successful Tyburn kennel and co-author of “The Manchester Terrier,” published in 1997. 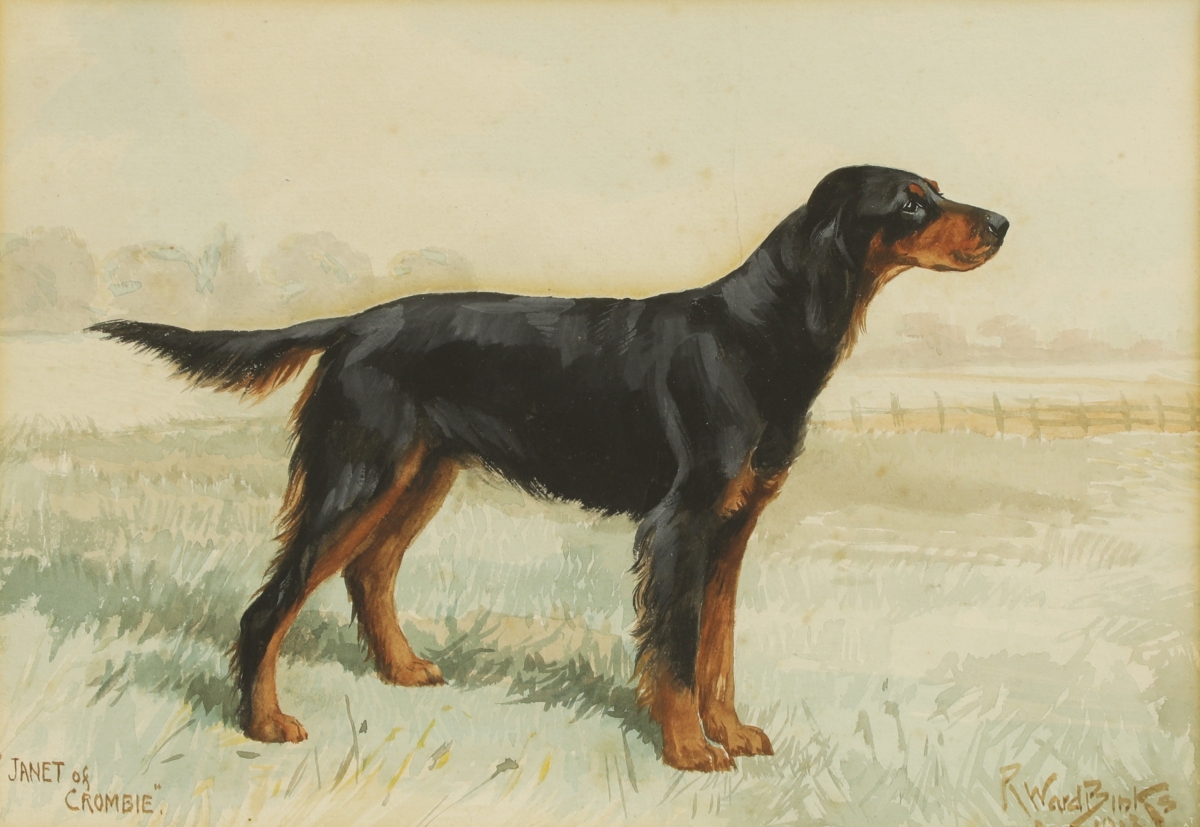 Although not one of Reuben Ward Binks’ best works, it was perhaps no surprise that his painting of the Gordon Setter Ch. Janet of Crombie doubled its top estimate, selling for £550. Janet was owned by Professor Turton Price, whose dogs dominated the breed after the First World War – in fact, he virtually saved the breed from extinction during those hard times. Janet was one of his leading bitches, winning a total of 13 Challenge Certificates, three of them at Crufts.

Another artist working around the same time as Binks was Henry Crowther, and in common with Binks his work will never rank alongside the best work produced by some of England’s top dog artists. Nevertheless, both made a contribution to the record we have today of how breeders were evolving breeds. 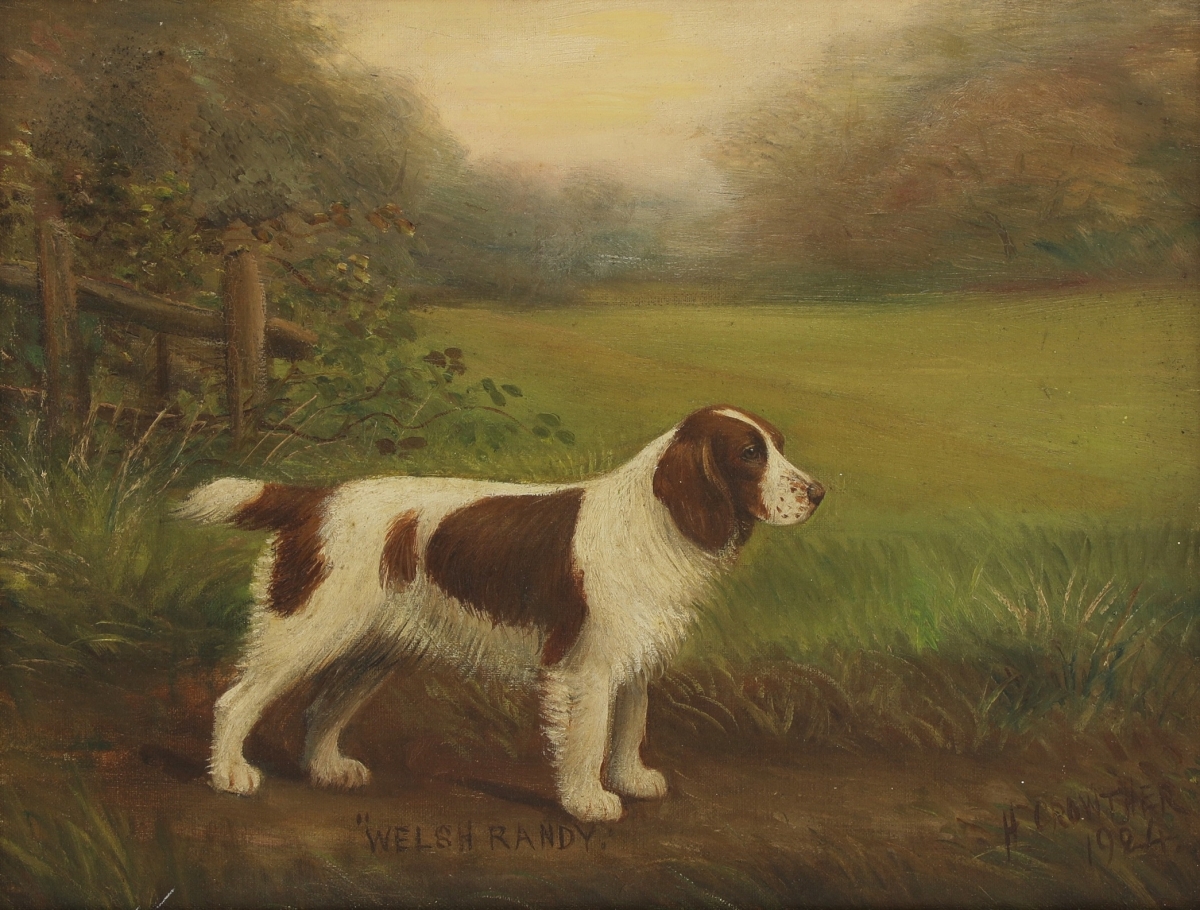 Crowther’s painting of the Welsh Springer Spaniel Welsh Randy was typical of many of his paintings of gundogs, the dog in profile against a background of open fields and woodland. It sold above estimate for £320. 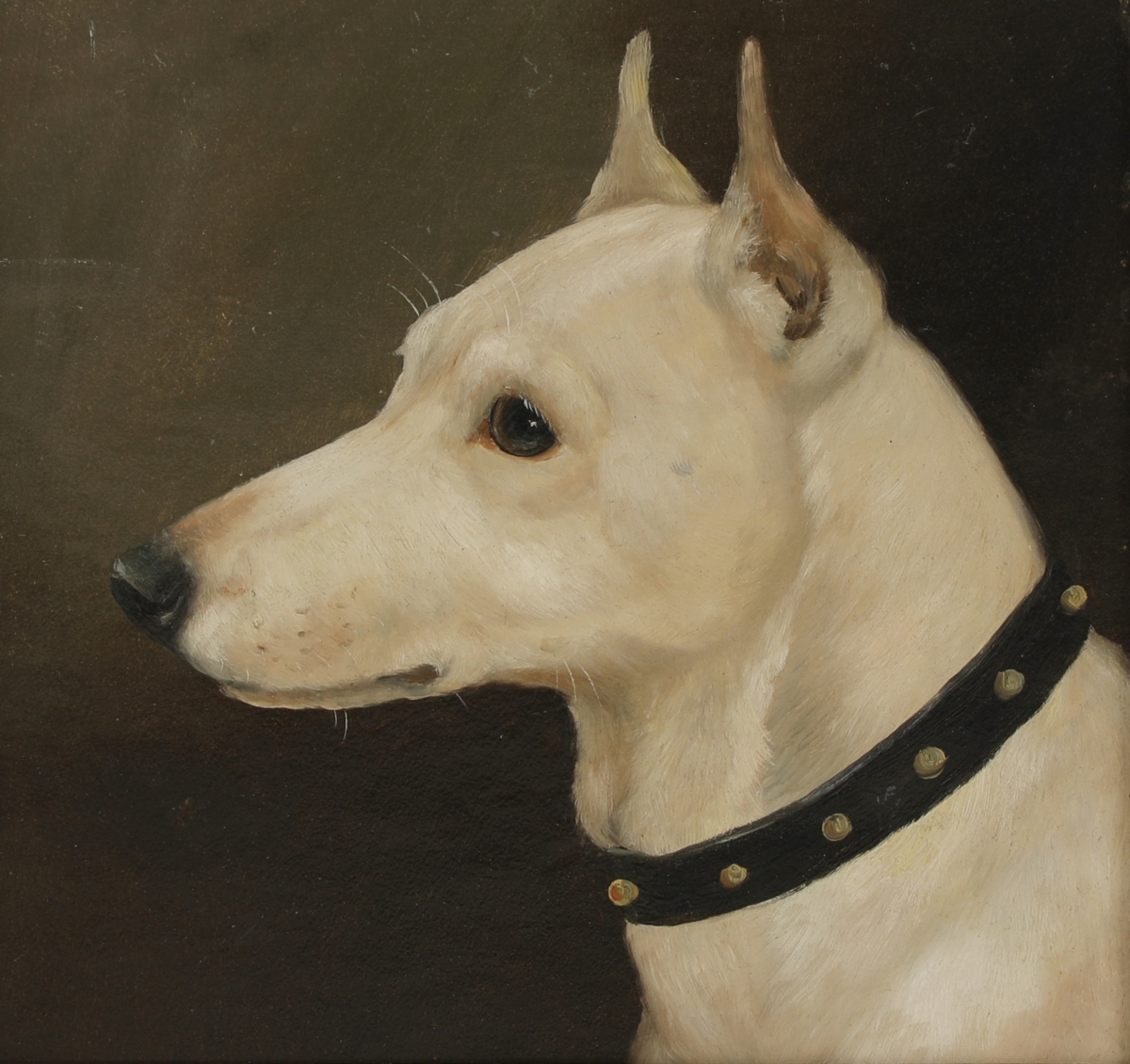 Also selling above estimate, this time for £520, was Henry Lucas Lucas’s head study of a white dog named Rugby with cropped ears. Lucas Lucas lived to be nearly 100, and this picture was painted during the middle years of his life, toward the end of the 19th Century. In common with the Maud Earl picture mentioned earlier, the breed is in the eye of the beholder. Is it a Bull Terrier before breeders decided to change the head shape in the early 20th Century, or is it the now extinct White English Terrier that fell so badly out of favor following the cropping ban of 1895?

The Basset Hound Danger “is believed to be the first Basset Hound kept as a pet in London,” a rather questionable statement, I would have thought. Nevertheless, at the time Danger’s picture was painted in the late 1930s by a now unknown artist, the breed was certainly very low in numbers. The dog’s front is synonymous with many of the breed at that time. Owned by a Mrs. A.G. Hitchen, Danger did win a second prize at Crufts, and his picture sold for a low estimate £300.

The Peterborough Royal Foxhound Show Society is to the hunting world what Crufts and Westminster are to the dog-showing world. Described as “a true temple of the Foxhound” and “a great institution,” it is the world’s most prestigious Foxhound show, and has played a significant part in the evolution of the modern Foxhound. It was founded in 1878 under the chairmanship of the Marquis of Huntly, and in 1934 King George V gave permission for the Society to add “Royal” to its title.

Held outside the hunting season in summer, the show is an opportunity for Masters of Foxhounds to show the best of their up-and-coming hounds from strains, many of which stretch back way into the 19th Century. 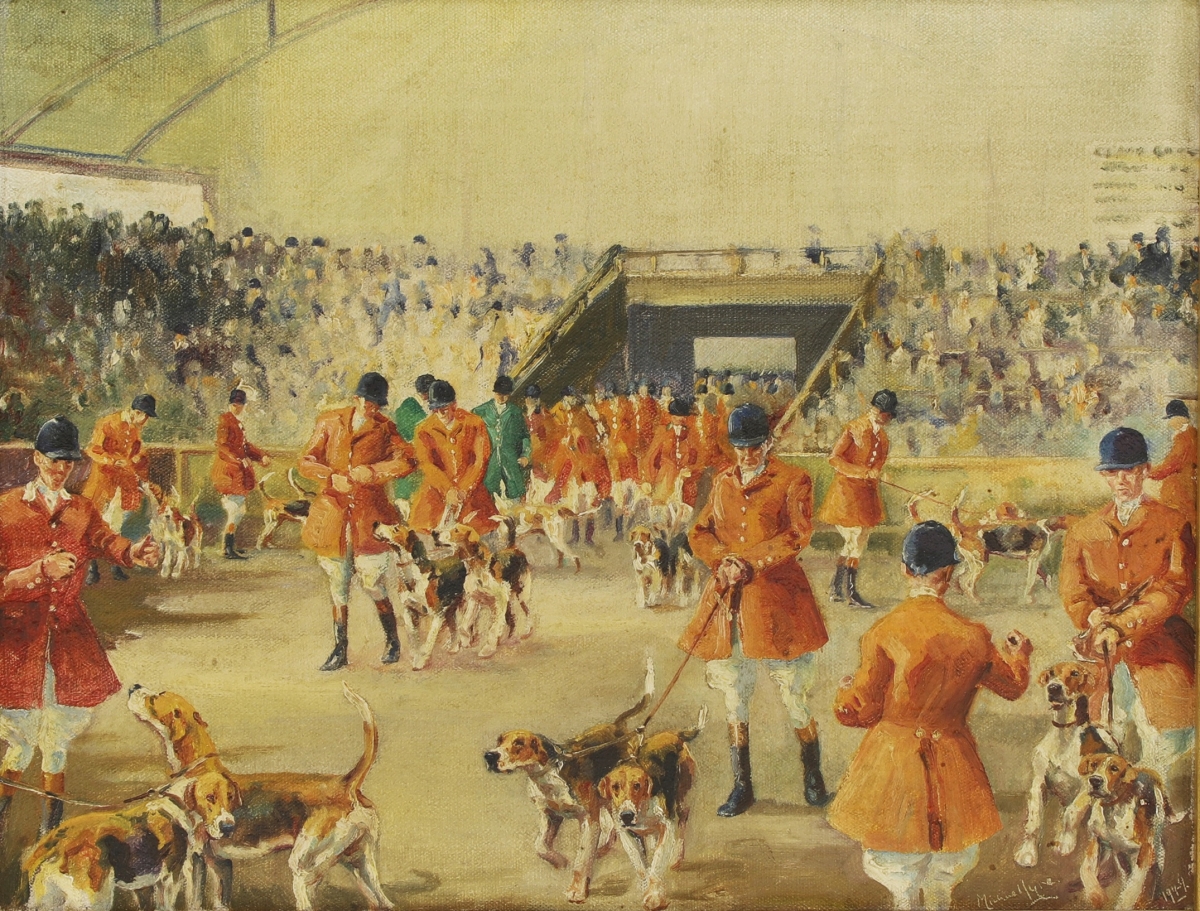 Michael Lyne’s oil, which sold for £420, was painted in 1949, when showing was returning to the prewar days: a crowded ringside, a full class of couples, huntsmen in their hunting livery and double-handling were de rigueur, unlike the show world most of us are used to.

Meanwhile in the States, Leland Little Auctions sold for $9,000 Thomas Blinks’ picture of the famous English coursing Greyhound Dendrapsis painted for his patrons the industrialists Stanley and James Dennis. 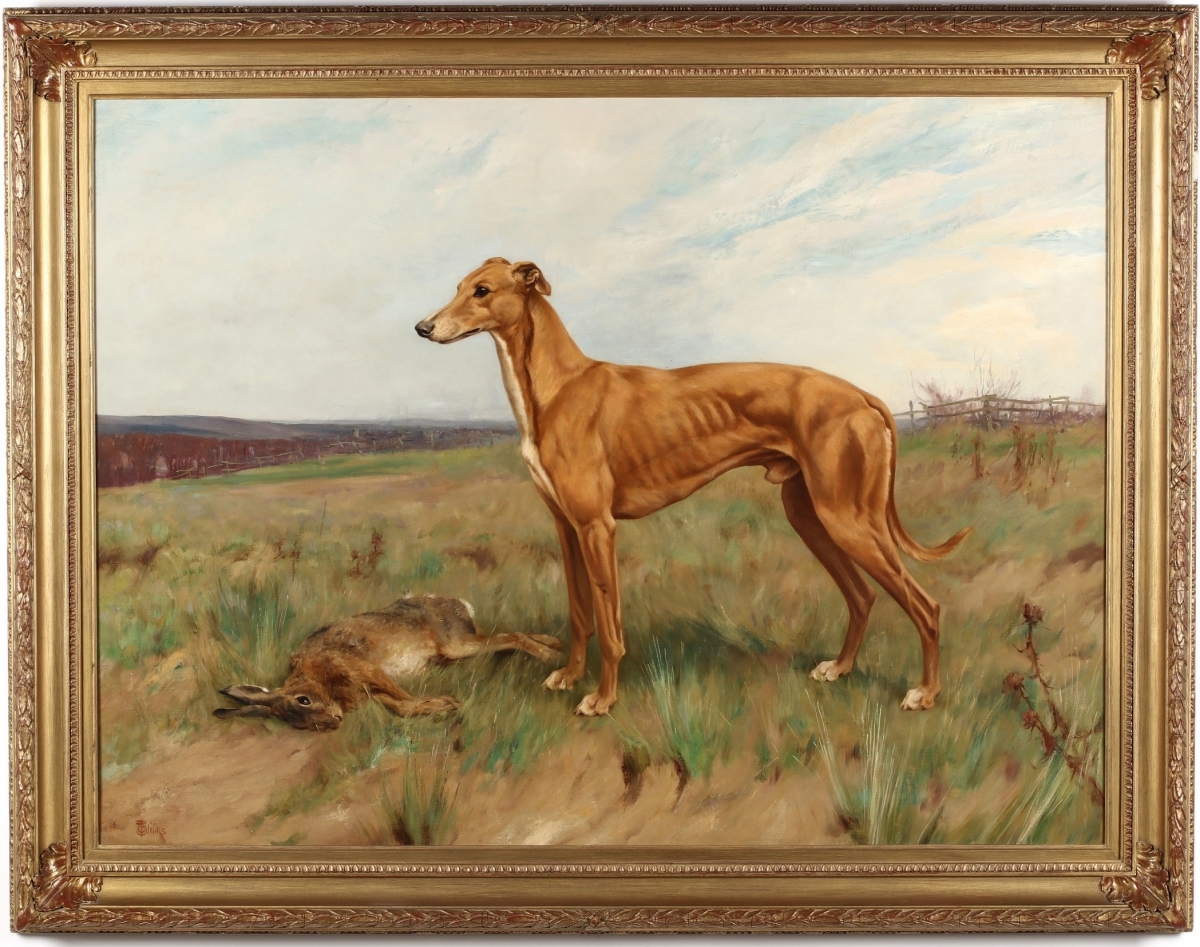 The Dennis brothers certainly did things in style when Dendrapsis gave them their first Waterloo Cup win in 1909. They gave a dinner in nearby Widnes for all 600 of their employees at their engineering works. After the banquet there was a firework display with as the main attraction a set piece of Dendrapsis himself going fizzing up in rockets and Roman candles.

© Dog News. This article may not be reposted, reprinted, rewritten, excerpted or otherwise duplicated in any medium without the express written permission of the publisher.
Sun, 11/15/2020 - 1:36pm