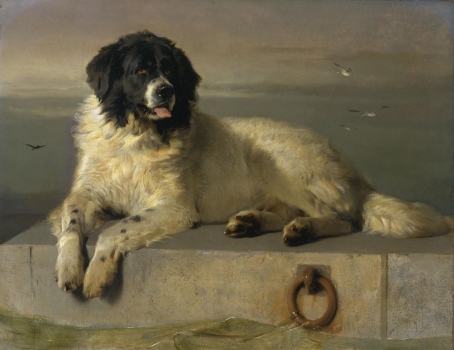 "A Distinguished Member of the Humane Society" by Sir Edwin Landseer. The artist is so indelibly associated with these black-and-white Newfoundlands that they are now known by his name: Landseers. 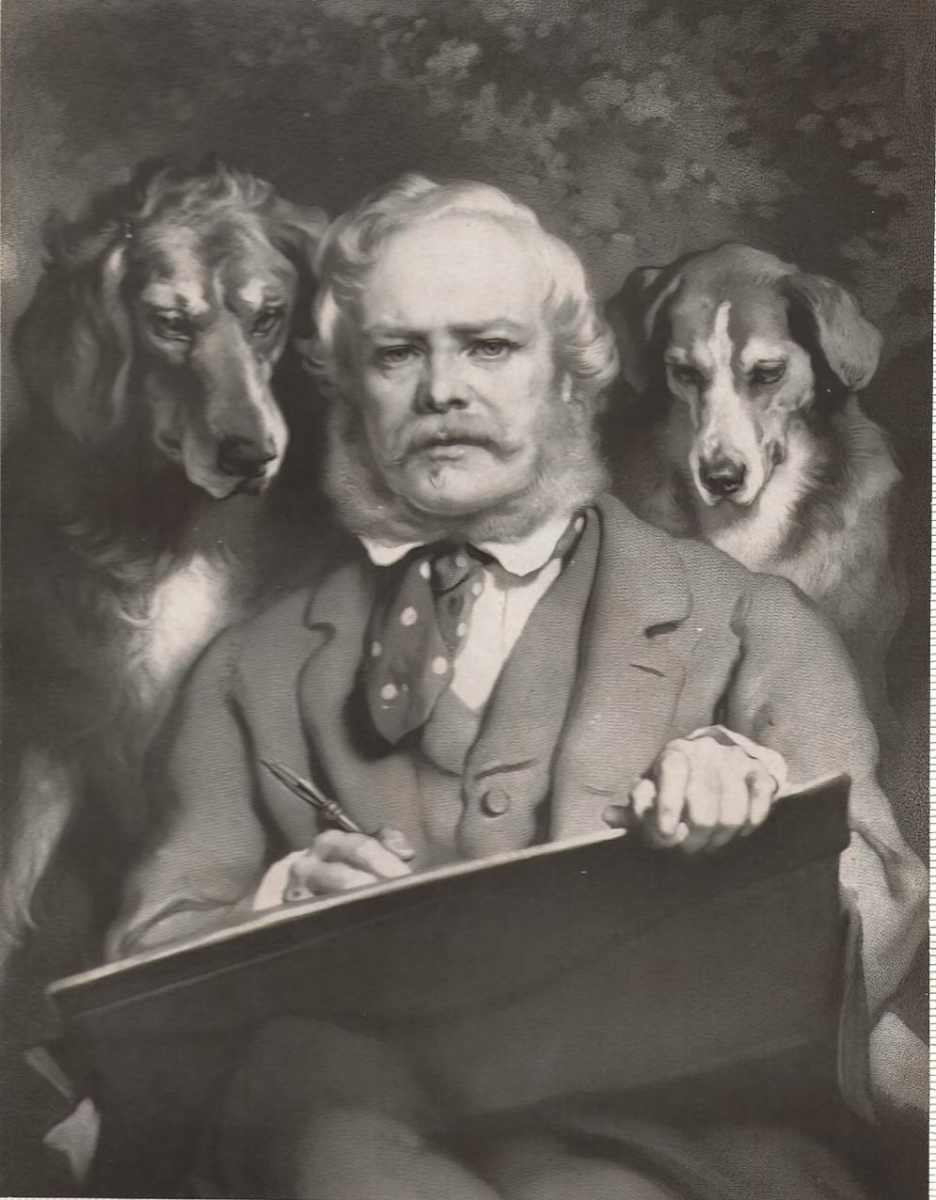 Considered the greatest sporting artist of the 19th Century, Sir Edwin Landseer R.A. (1802-1873) is remembered best for the monumental lions in Trafalgar Square in London and his equally monumental painting “Monarch of the Glen.”

Landseer would also be considered the first artist to popularized dog art as a genre. His first large-scale painting of dogs was painted when he was only 14 and was exhibited at the British Institution, where it was greatly admired.

Landseer was the son of the multi-talented John Landseer: writer, antiquarian and theorist but above all an engraver.

Edwin was a child prodigy who became a brilliant painter, master of anatomy and a great draughtsman. By the age of 16 he was an active exhibitor at the Royal Academy, already patronized by leading collectors and talked about as being the next great star. With professional success and from a fairly sheltered early life, he blossomed into a dandy and man of the world. 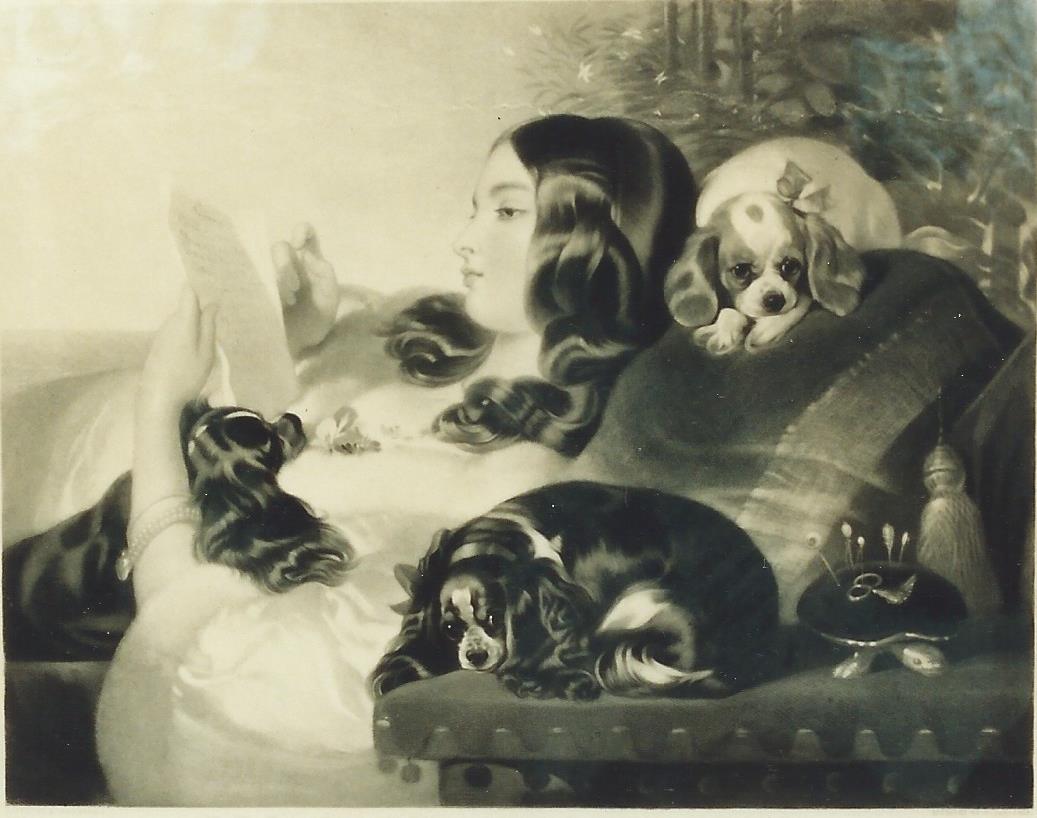 His charm quickly won him entrée into the drawing rooms of the great and influential, so throughout his life he was able to move in the highest aristocratic circles. Landseer acquired patrons from the upper echelons of society, from the growing band of wealthy industrialists with their “new money”; even Queen Victoria became one of his foremost patrons. His paintings of the Queen’s Toy Spaniel “Dash” and Prince Albert’s Greyhound “Eos” are two of the best-known Victorian portraits of dogs. He also painted the Queen’s relation, Princess Victorie of Saxe-Coburg-Gotha, with three Toy Spaniels.

Landseer first visited Scotland in 1824, and once discovered, Scotland was to become his favorite hunting ground. 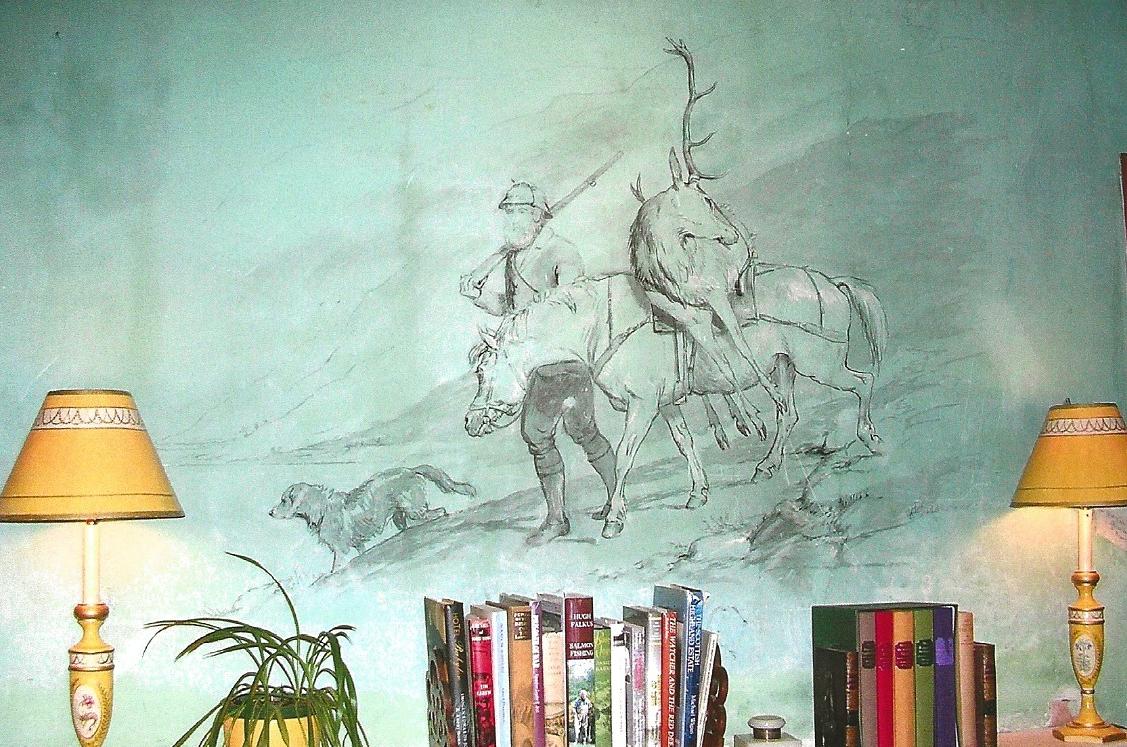 Glen Affric is often described as the most beautiful glen in Scotland. The Glen Affric estate of some 10,000 acres contains a large area of the ancient Caledonian pinewoods. Perched seemingly in the epicenter of a loch is Glen Affric Lodge; there Landseer painted murals on the walls of the reading room. One of the murals depicts a ghillie returning from stalking with a stag across the pony’s back. They are being led by a Golden Retriever, for it was at Guisachan House on the estate that Lord Tweedsmouth initiated the first breed of Golden Retrievers. He put the retrievers to good use at the shooting parties he hosted at Glen Affric Lodge. 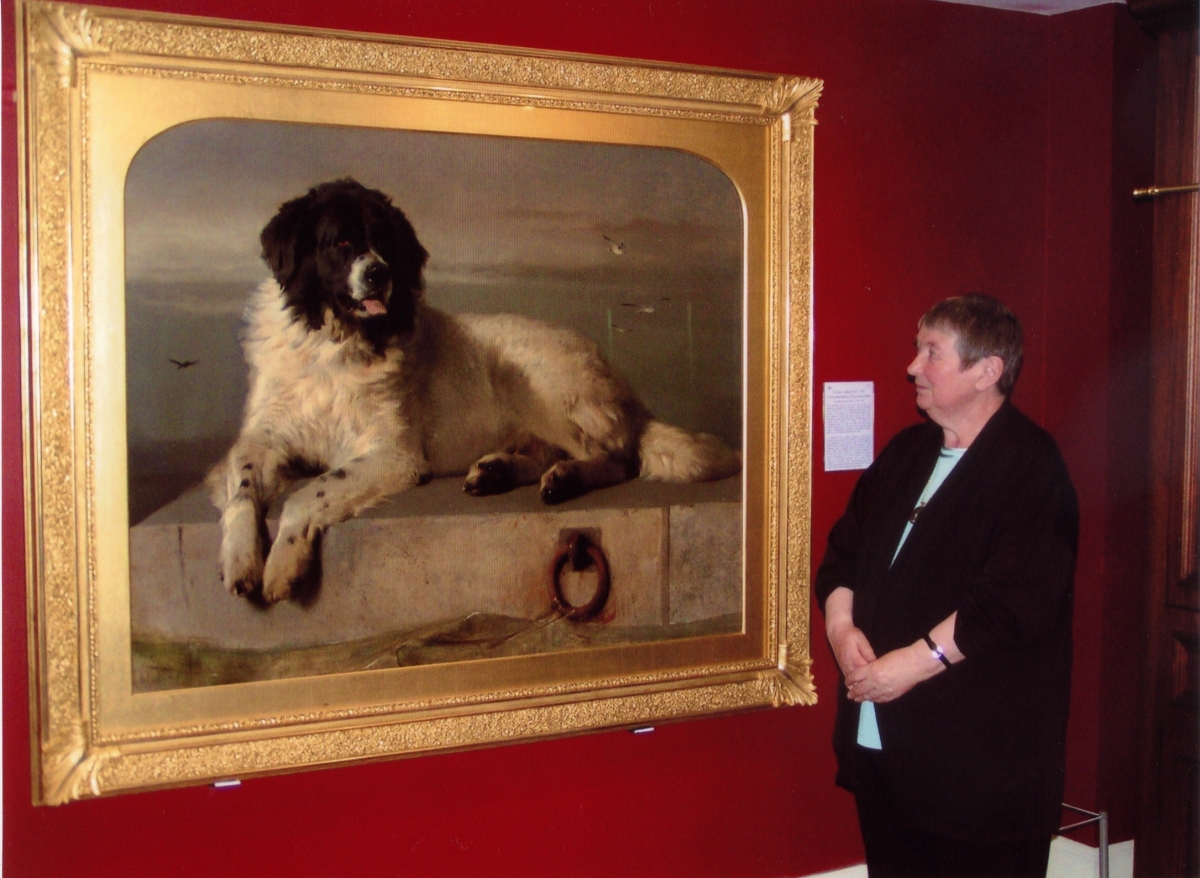 Di Sellers with Landseer's iconic painting “A Distinguished Member of the Humane Society.”

Landseer’s painting “A Distinguished Member of the Humane Society” is one of the most iconic dog pictures of all time. It was exhibited at the Royal Academy in 1838 and was instantly considered one of the finest of Landseer’s work. The original “Distinguished Member” was said to have been a stray dog called “Bob” who, tradition has it, had twice been shipwrecked with his owner. Bob was supposed to have found his way to London, where he gained a reputation for life-saving, credited with 23 rescues.

The painting is thought to commemorate Bob’s bravery. The model for the picture was a dog called “Paul Pry” who belonged to Mrs. Newman Smith whose husband purchased the picture for 100 Sovereigns. He left the picture to the National Gallery, into whose possession it passed on the death of his widow in 1887.

It later passed into the possession of the Tate Gallery, where it languished unloved for many years, getting more and more distressed. Thanks almost entirely to the efforts of the late Ron Pemberton, an American breed enthusiast and collector who spearheaded a committee to raise a not inconsiderable sum to have the picture restored, it would still be languishing at the Tate. 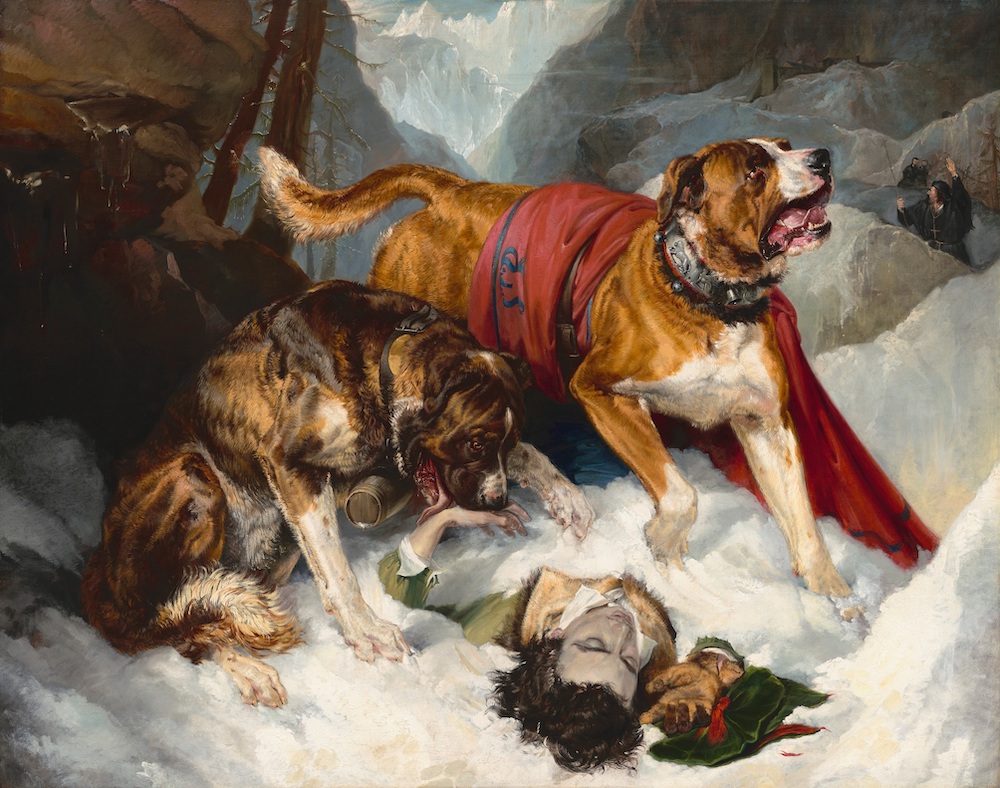 At the time it was first exhibited in 1820, “Alpine Mastiffs Reanimating a Distressed Traveller” was Landseer’s largest and most ambitious painting to date. Many legends had grown up around the great hospice on the pass through the Alps from Switzerland to Italy and were a fruitful source of subject matter for artists and writers alike. Landseer had never been to Switzerland, and the setting for his picture is rather theatrical. At the time it was painted, St. Bernards were a rarity in England, although Landseer had previously drawn one of the first to arrive on Britain’s shore.

One dog has a red blanket across its back for use by the traveller, wears an elaborate collar with bells attached and is barking to alert the rescuers that they have found the traveller. The second dog has a small keg of brandy attached to its collar. 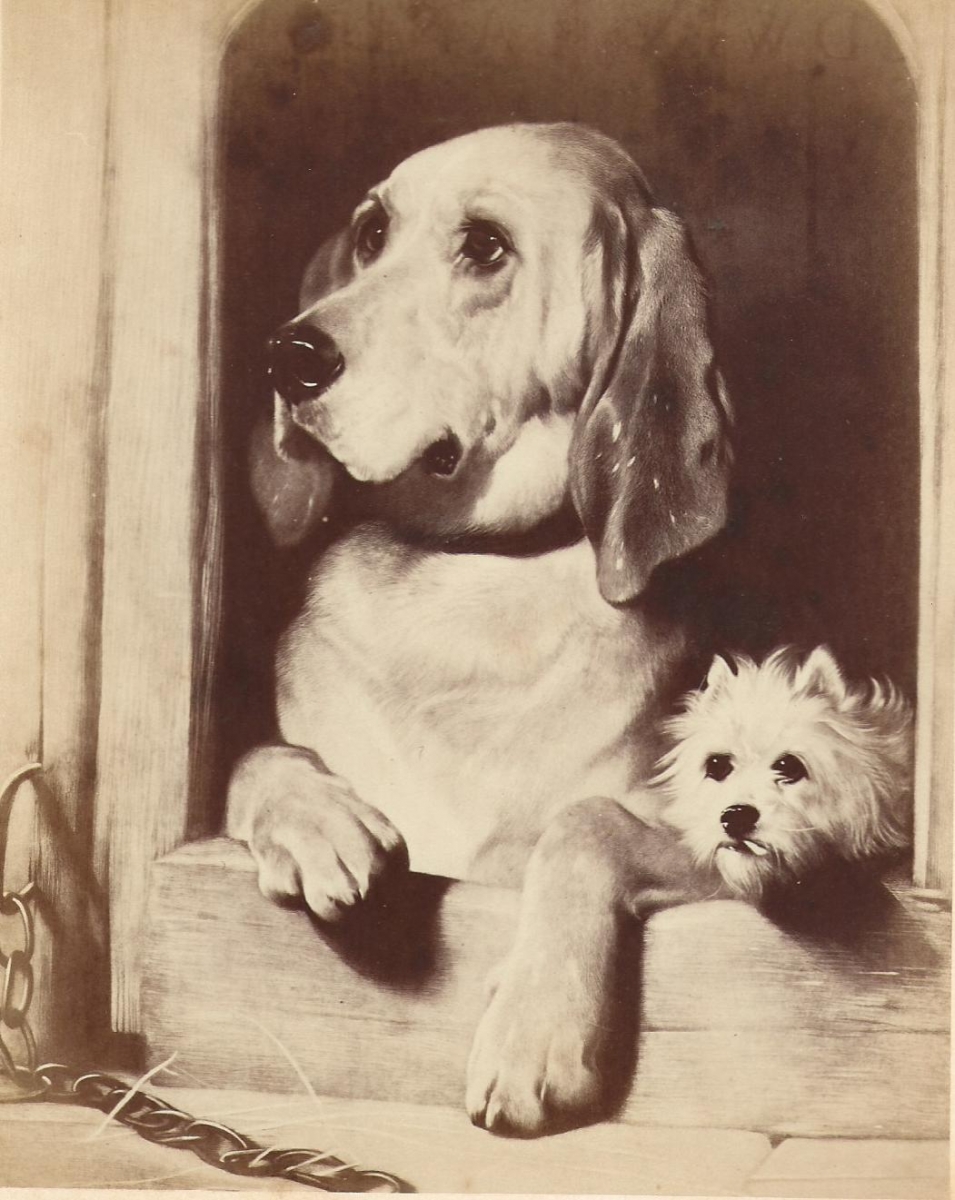 “Dignity and Impudence” was, and remains, one of Landseer’s most popular works. The picture was commissioned by Jacob Bell, who owned both dogs. The Bloodhound was called “Grafton,” and by the size of the chain attached to the kennel, the kennel belongs to him. The impudent little terrier was called “Scratch,” described at the time the painting was completed in 1839 as being a “white Scotch terrier.” For this reason, the painting is a favorite with West Highland White Terrier enthusiasts. 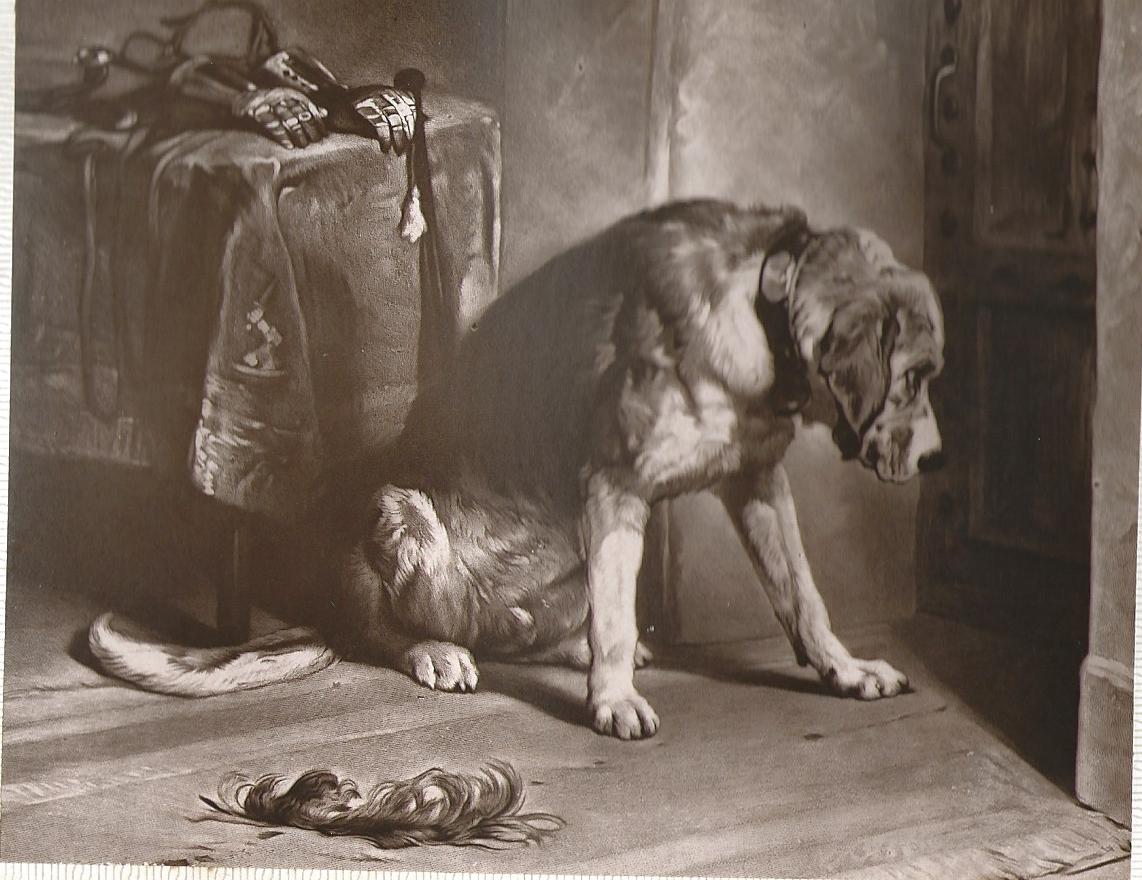 Writing in 1874, F.G. Stephens considered “Suspense,” which Landseer painted in 1834, to be the artist’s best picture. With this picture Landseer leaves it to the imagination of the spectator. The most popular theory is that the Bloodhound is watching at the closed door, shut out from a wounded knight, his master. Steel gloves lie on the table, drops of blood and an ostrich or eagle feather are on the floor. The faithful hound is in deep suspense for some indication that his master lives. 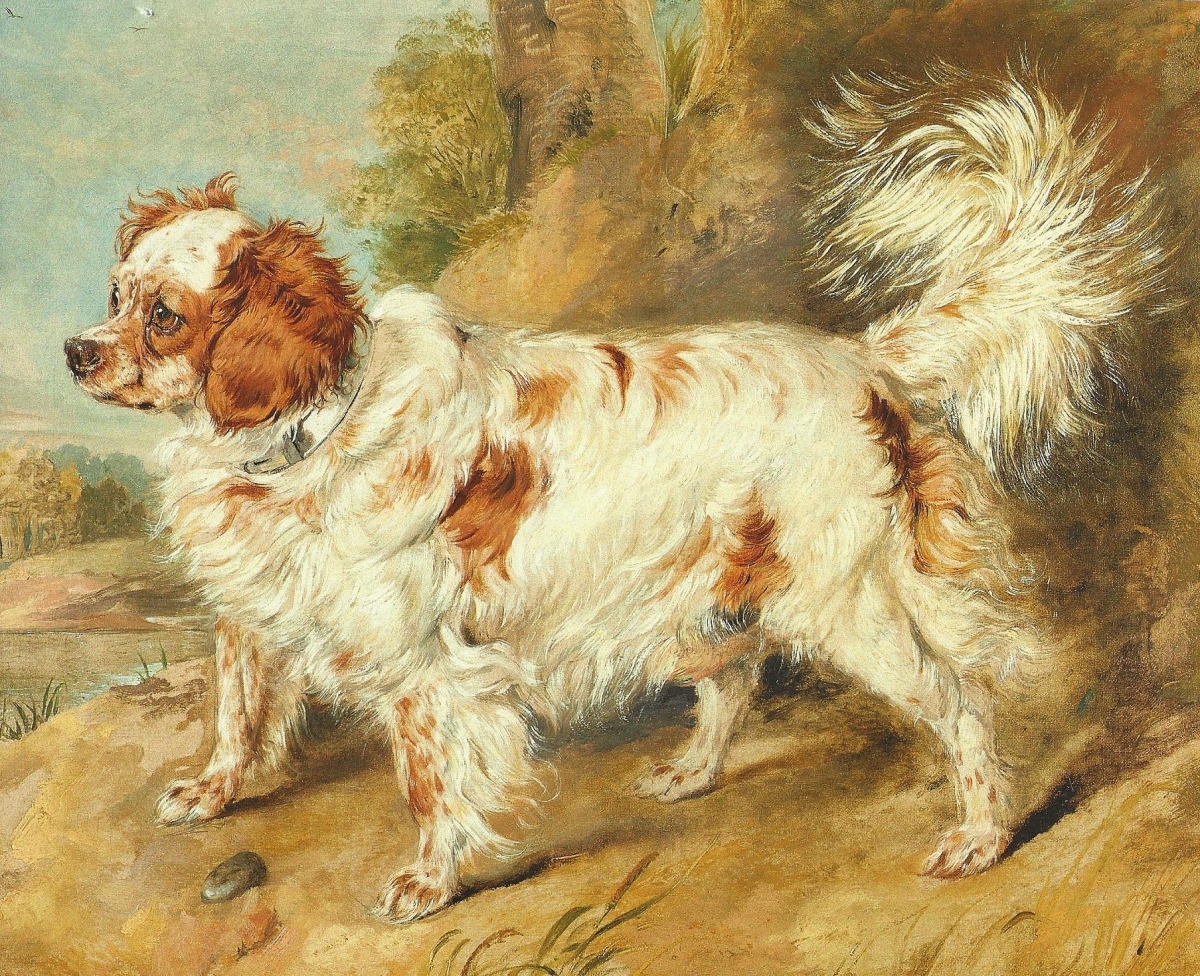 Toy Spaniels were a favorite subject for artists throughout Europe right up until the late 19th Century. It was Landseer who, in my opinion, gives us the best picture ever completed of the breed. Painted when Landseer was only 17, it was exhibited at the Royal Academy in 1819. The dog was a favorite of William Plummer, for whom the picture was painted. Plummer was a man of immense wealth and political influence, and served as a member of Parliament for a number of years.

The picture was exhibited at the Rountree Tryon Galleries in 2018 with a price tag of £65,000.

© Dog News. This article may not be reposted, reprinted, rewritten, excerpted or otherwise duplicated in any medium without the express written permission of the publisher.
Sat, 06/26/2021 - 9:58am