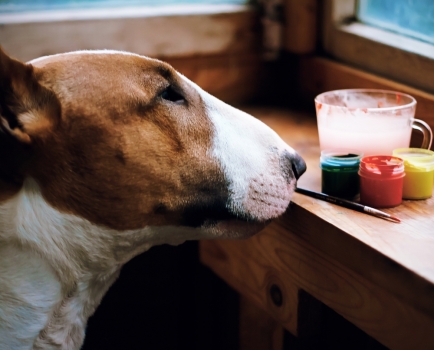 Before the Roman Nose

In the “Popular and Illustrated Dog Encyclopaedia” (1934-5), edited by Walter Hutchinson, Major Mitford Price wrote, “The original Bull Terrier, or Bull-and-Terrier, as he was then styled, bred for fighting in the pits, bore a far closer resemblance to the Bulldog of that day than to his terrier forbears: for there exists scores of old prints as evidence that the old Bulldog, as well as the Bull-and-Terrier had the unexaggerated (in comparison with the absurd modern standards) Bulldog head, and the legs, straight and longer, of the terrier. At the same time that the new Bull-and-Terrier made its appearance, the Bulldog fanciers began breeding their animals heavier and lower to the ground, so that the Bulldog acquired a new type. 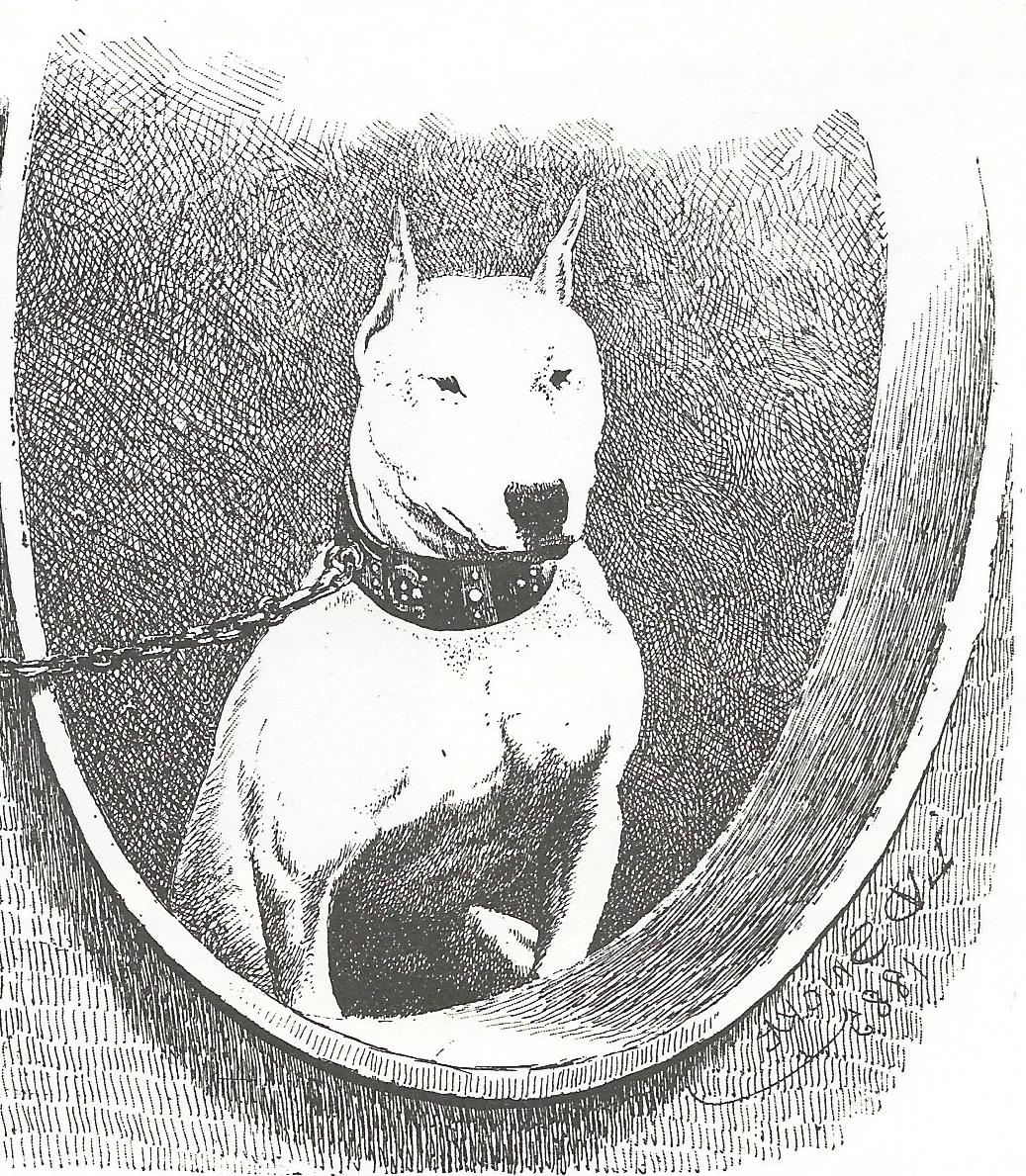 “At the end of the ‘fifties,’ however, a great and vital revolution was effected,” he continued. “Mr. James Hinks, of Birmingham, after years of experiment, burst upon an astonished and frankly sceptical world an entirely new animal – an immaculate white-coated Bull Terrier, from whom the undesirable points of the Bulldog (the roach back, the bent legs, the splay feet, the undershot jaw etc.) were still further eliminated, and for whom he claimed equal courage and greater activity.”

The early engraving of a cropped-eared dog named “Dutch” wearing a heavy collar decorated with studs and a chain attached is one of James Hinks’ early dogs. The pencil drawing heightened with white by Sir Edwin Landseer of a dog named “Brutus II” sitting in a stable shows the earlier type of Bull-and-Terrier that Hinks refined, particularly in head, to create his Bull Terrier. “Brutus II” was given to Landseer by his friends, Mr. and Mrs. W.H. Simpson from Essex, and the drawing was completed circa 1830s/40s. 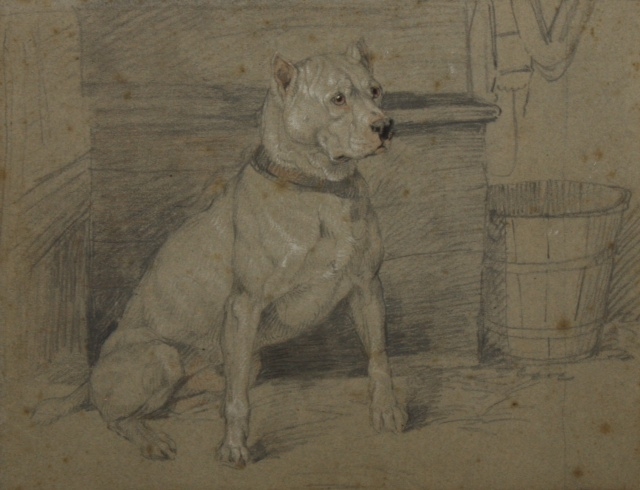 Eton-educated British politician and owner of a large country estate in the Midlands, Sewallis Evelyn Shirley is best known as the founder of the Kennel Club in 1873. He had his finger on the pulse of a number of dog breeds as they were emerging and being established in the middle and later years of the 19th Century. One of these breeds was the Bull Terrier that Hinks and others were establishing in nearby Birmingham on lines of fighting dogs, which at the time proliferated in the area. 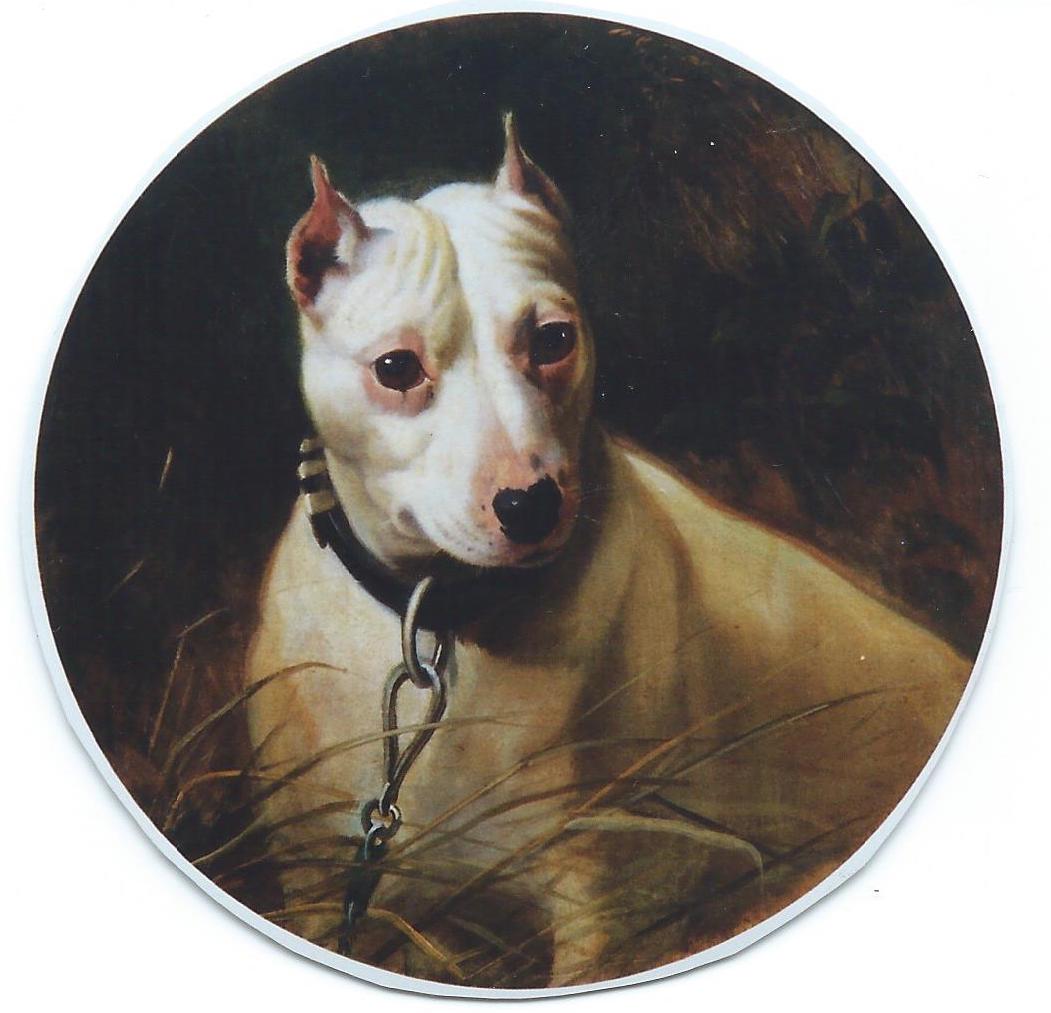 The head study of a cropped dog wearing a collar with chain attached shows “Nelson,” owned by Shirley and painted by George Earl, the artist whom “the good and the great” of the time would have been keen to paint their dogs.

One of Earl’s most important projects and for which he is often remembered is a series of portrait head studies of dogs that he called “Champion Dogs of England,” completed around 1870 and which today in its complete state is exceedingly rare. “Nelson” is one of the head studies. 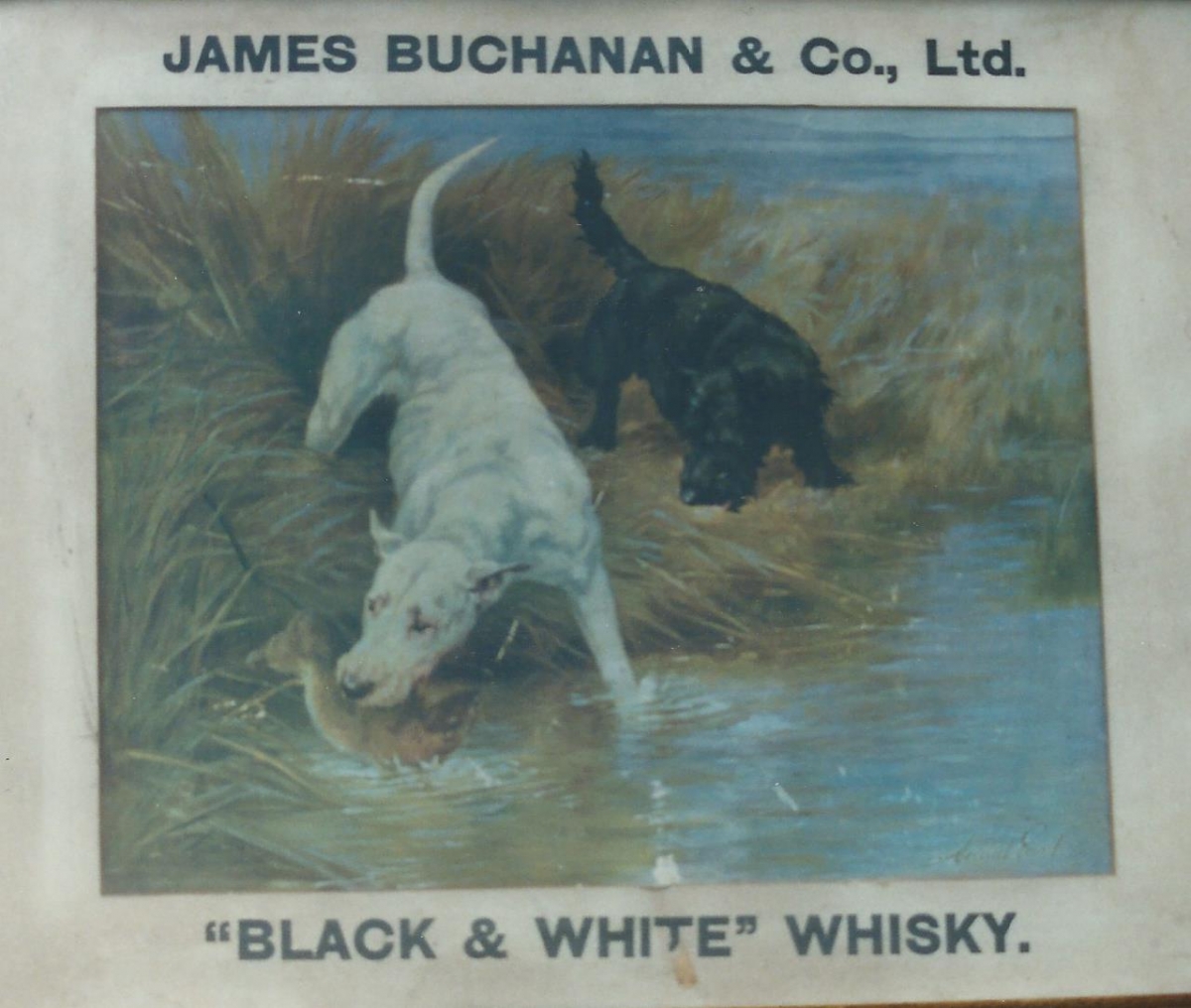 George’s daughter, Maud, was to become the best known of the dynasty of Earl artists. She is considered by many to be the finest painter of purebred dogs ever, and her output of breeds knew no boundaries. The Whisky distillers James Buchanan & Co. Ltd. seized on the opportunity to commission her to complete a series of pictures to promote their brand, and the Bull Terrier and Scottish Terrier working along a riverbank is one such picture.

When the cropping of dogs’ ears was stopped in Britain in 1895, interest in four of the traditionally cropped breeds fell dramatically: Irish Terrier, Manchester Terrier, Bull Terrier and the White English Terrier. The White English fell so badly out of favor that the breed became extinct well before the First World War. 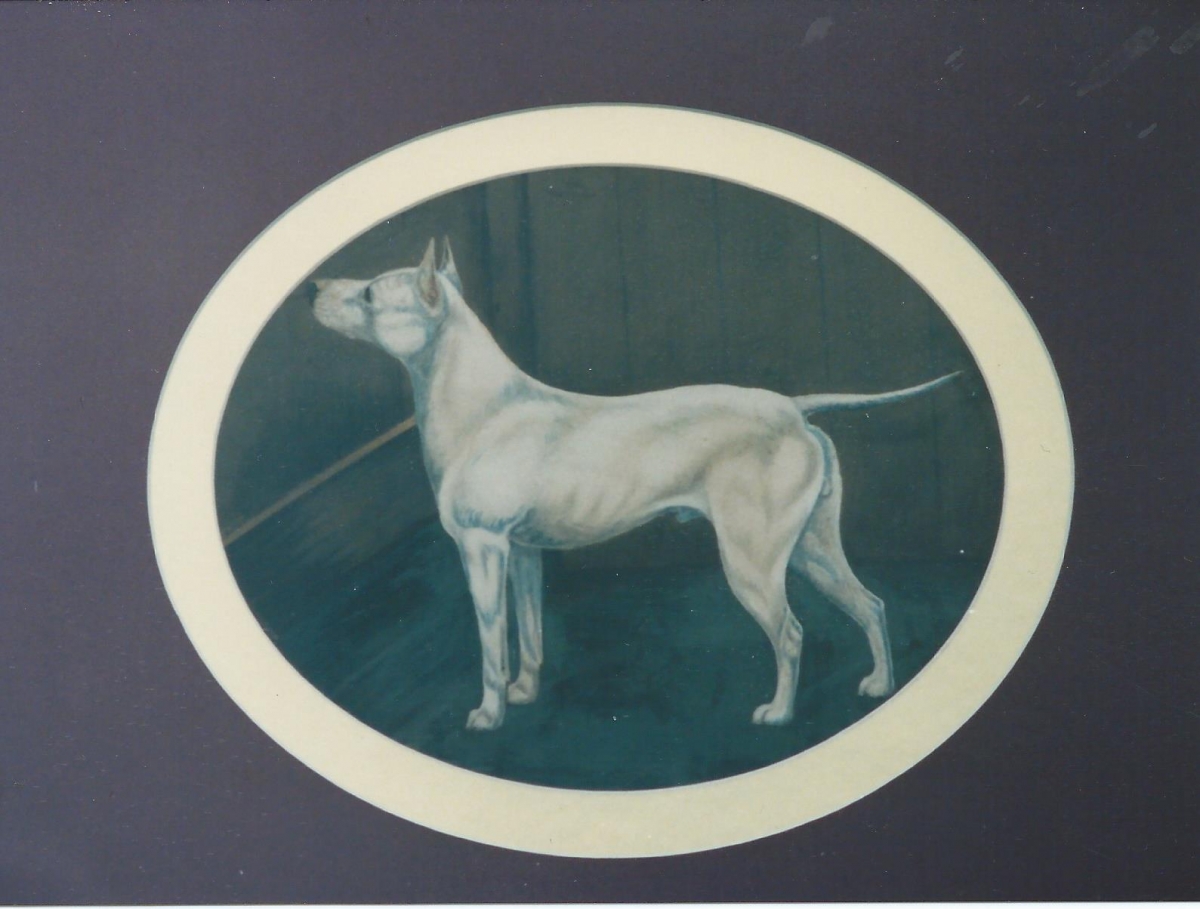 In art towards the end of the 19th Century it is often difficult to differentiate between the Bull Terrier and White English, as the black-and-white drawing of a dog in profile standing by a closed door exemplifies. I’m leaning towards the Bull Terrier, but others may know better. 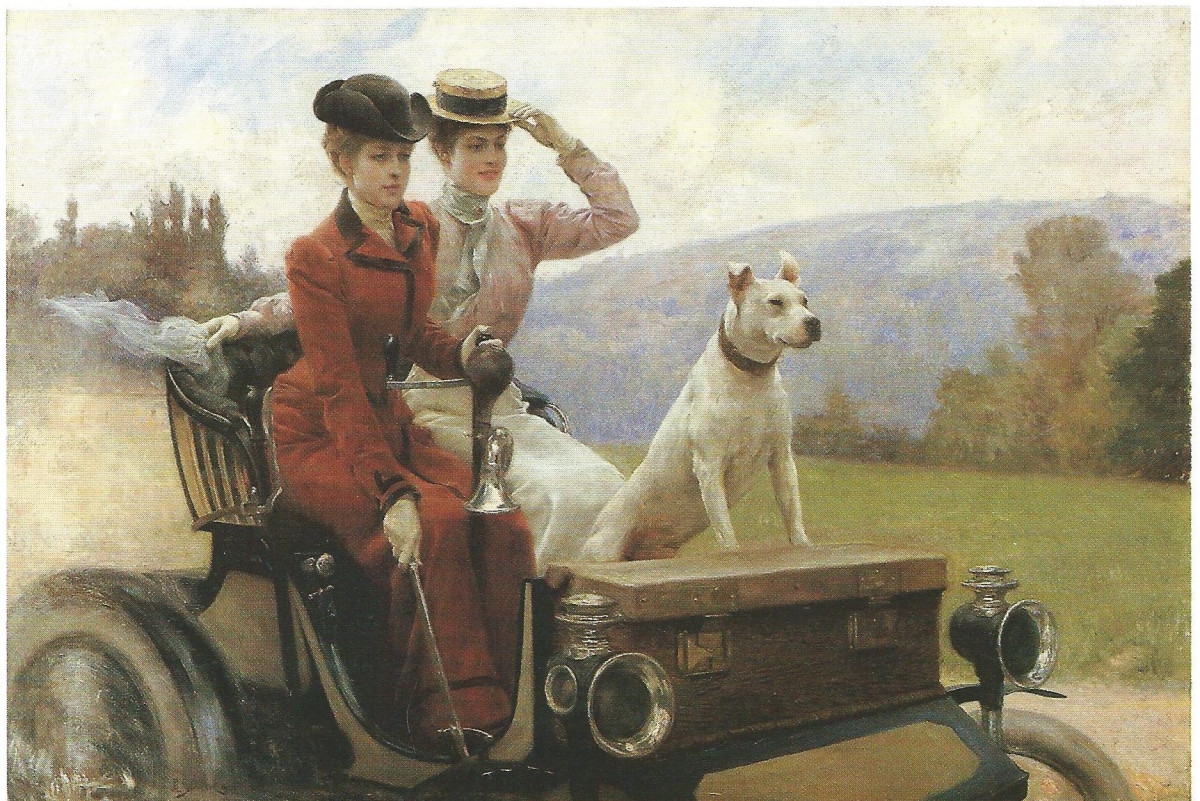 By the beginning of the 20th Century, the Bull Terrier had reached respectability with all levels of society as the painting by Julius Stewart, “Les Dames Goldsmith au bios de Boulogne,” shows. It also shows the difficulty breeders would have had in establishing a natural erect ear. 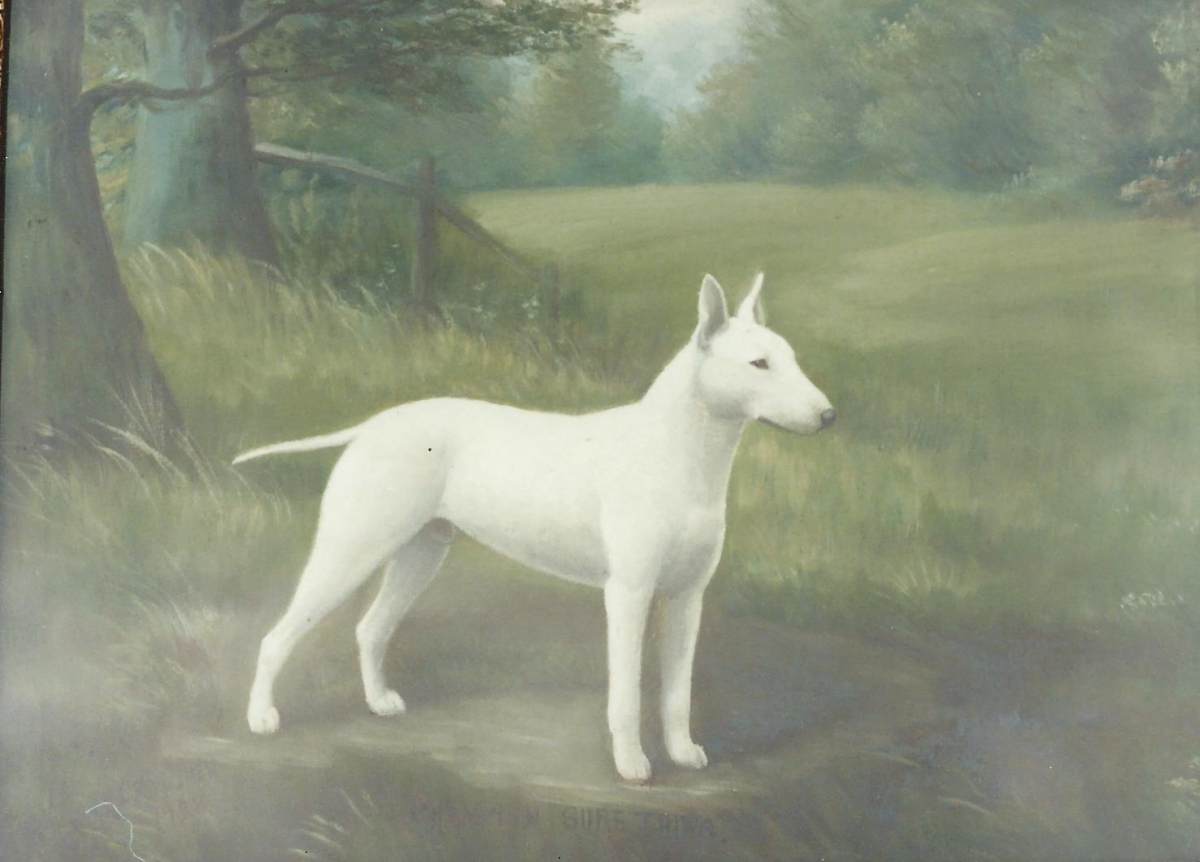 The dog standing in an extensive landscape was painted by Henry Crowther and features a dog named “Ch. Shure Thing.” “Shure Thing” was bred by Jimmy Thompson and co-owned by Thompson and Carleton Hinks, James Hinks’ grandson. He was born in 1927 and sired by one of the most-used stud dog of the day, “Ch. Dervish of Dore,” the result of a mother-to-son mating.

“Shure Thing” won his title while still a puppy, and soon after was exported to Mr. A.H. Gale III in America. He was used at stud before leaving England’s shores, and through one of his son, “Ch. Beshelson Bayshuck,” is behind all modern Bull Terriers. 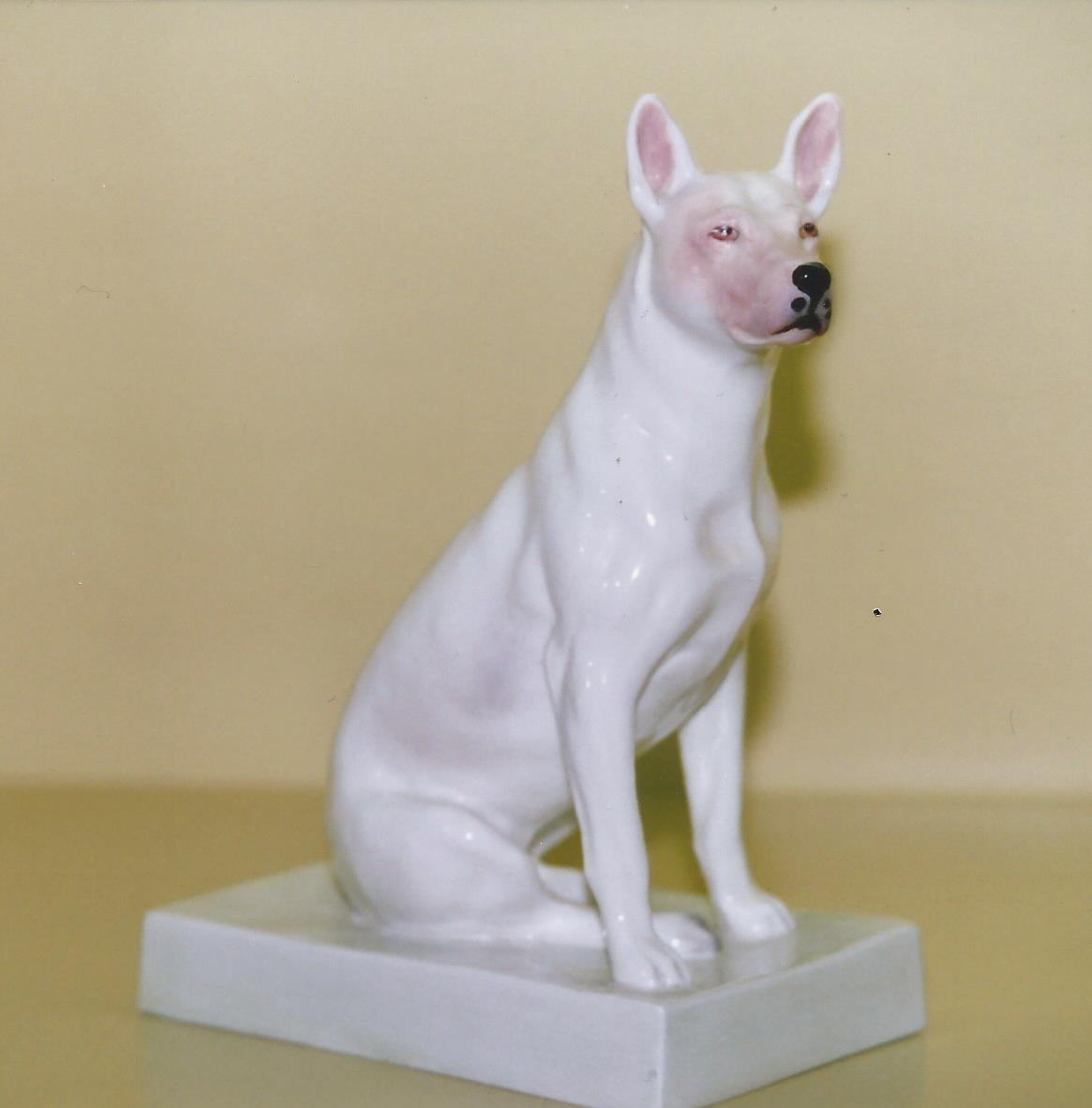 Virtually all the Continental porcelain and pottery manufacturers ignored, or were not aware, of the Bull Terrier. Not so Britain. In 1931 Royal Worcester introduced a dog sitting on a rectangular base. It was modelled by Doris Lindner, who became the company’s chief modeller of dogs. The Bull Terrier was her favorite breed, and the sitting dog was modelled on a dog named “Bill” owned by her friend Major Fortescue. 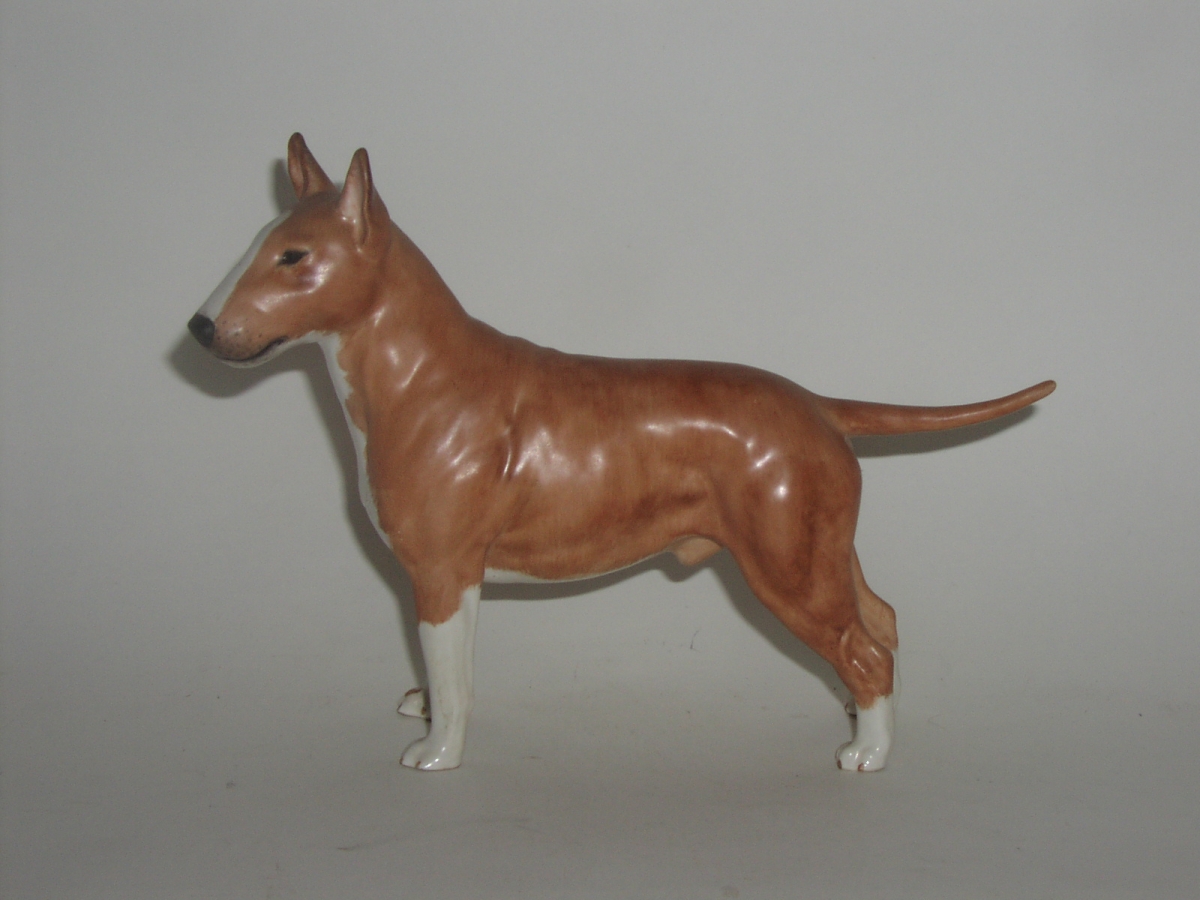 Beswick was probably the first commercial company to introduce a colored dog into their range, which they did in 1942, modelled by Arthur Gredington. In common with some other manufacturers with an eye toward commercialism they also produced the model in white, even though it was modelled on a colored dog, Miss Montague-Johnstone’s Ch. Romany Rhinestone.

At the time he was bred, most serious breeders were still putting any colored puppies in a bucket at birth. Rhinestone’s survival was in the nature of a lucky chance, as his breeder was on the way to the bucket with him when she thought that he looked a very funny sort of off-white color, and so spared him. He was, in fact, the palest fawn but grew darker as he grew older.

He was the first colored that experts considered had the now fashionable head as good as the whites. He is also one of those considered to be the foundation of the breed postwar.

© Dog News. This article may not be reposted, reprinted, rewritten, excerpted or otherwise duplicated in any medium without the express written permission of the publisher.
Thu, 05/13/2021 - 1:15pm