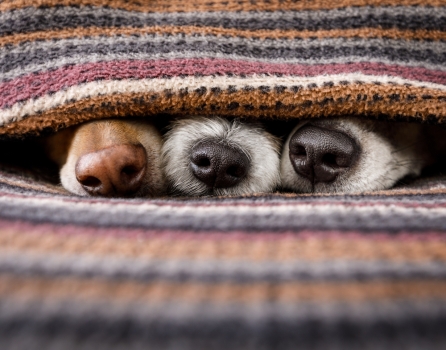 After eight months of coronavirus lockdown, a judge ventures back into the ring
By
Sharon Sakson

After eight months of coronavirus lockdown, it felt almost surreal to be on a jet heading to Tucson, Arizona, to judge the Canyon Cluster Dog Shows. Southwest Air imposed strict rules about masks and distancing. No one ever stood near me, no passengers were seated in the middle, and we were served only a bag of pretzels and a plastic cup of water. Not very luxurious. But it felt pretty safe.

At the hotel, the first clerk I met turned down my room request with the unlikely statement that the hotel was booked, even though there were only 10 cars in a parking lot built for 200, and no one in the lobby but me. It was a reminder that big hotels have had to shut down entire wings and floors to keep going on a scaled-down basis.

The restaurant had a sole waiter who seemed truly delighted to have eight dog-show judges asking for breakfast at 6:30 a.m. Ray Filburn, Bob Shreve and I sipped coffee and turned down his constant offers to bring us more food. In the evening, a bartender and a waitress waited sadly for customers who never came. The look on their faces was desperate.

This lost year, the year from hell, is almost over. The brutal COVID-19 coronavirus has infected millions, put hundreds of thousands of people out of work, closed restaurants and stores, and did away with concerts, football games, birthday parties and dog shows.

The Madera Canyon Kennel Club, led by Kathy Murphy and Gloria Kerr, and the Canada del Oro Kennel Club, headed by Dr. Thomas L. Hossfeld and Ursula Woods, and the show chair for both clubs, Dr. Sophia Kaluzniacki, along with Lynn Brown-Quick and others, brought a little sunshine to the very dull dog-show scene with the four-day Canyon Cluster. The shows were limited to 1,100 dogs each day, because club members suspected people were so starved for dog shows that they might enter in overwhelming numbers. The show opened for entries on October 5 – and reached the limit and was closed one hour later! Several exhibitors stopped by to tell me longingly about sure-to-win dogs left at home because the entry limit was reached so quickly.

The beautiful Santa Catalina Mountains loomed over the show at Rillito Racetrack Park. They turned from green to tan to purple at various times of the day, providing a lovely backdrop.

“Every person entering the show site will be required to provide a signed waiver …” Two club members at a table at the entrance handed out pens. After signing, we got a plastic bracelet indicating we had done so.

“No spectators allowed.” I really missed seeing happy people gathered around a breed they were discovering.

“This is a Low Touch, Show and Go event. Please leave when you finish showing.” Nearly everyone complied with that rule, which meant that when I finished judging, there was no one around for chats. Only my two efficient stewards, Lesley and Barbara, stayed around to converse with me.

An innovation that worked rather well: Exhibitors picked up their own ribbons on a table outside the ring. The judges at this show all liked that. For the show, it was touchless, so there was no possibility of virus transmission. For the judges, it meant no fumbling for ribbons, possibly mixing them up and wasting time. The exhibitors knew which ones to take, and there was a watchful steward right there if they did not.

“Face masks covering nose and mouth must be worn at all times.” This had two effects on me: 1) The show seemed lifeless without anyone smiling, and 2) I didn’t recognize people! I had looked forward to seeing many Arizona friends. I’m not sure if I saw them or not.

“Maintain a social distance of at least six feet at all times.” I was glad when Whippet breeder Daniel Lockhart approached and said his name, but almost broke the distance rule to give him a hug, which is one of the things I miss most these days. We chatted from six feet apart, straining to hear each other because the masks muffled our voices.

Even wearing masks and keeping six feet apart, we managed to have a pretty good time.

When canines can’t travel and be shown for eight months, they tend to get a little rusty on their social skills, like standing still for the judge. But that was OK with me. For many, it was the first time in the ring since everything shut down back in March. Many class dogs needed a little time to get used to being examined.

The entry in Tucson was full of quality. I got to put my hands on 44 Whippets and 66 Great Danes, which was a thrill. In the morning before judging, Jason Hoke said to me, “You’ll see six you could give the breed to,” which is high praise indeed from the Great Dane club’s breed educator.

Assistant show chair Gloria Kerr took us to dinner at El Merendero for a Mexican meal. We chatted about who we knew who had become ill with the virus. We each knew a friend, co-worker or cousin, but none of them were dog-show people. Bob Shreve put forth the theory that dog-show people have less COVID-19 because we live with dogs. Our immune systems are therefore used to fighting off all kinds of viruses, including coronavirus. Plus, he added, “the multitude of people and the different locations across the country that we have ventured to have exposed us to most all the viruses out there. We are constantly exposed to new bugs.”

That’s a brilliant theory. We all hope that it’s true.

Even wearing masks and keeping six feet apart, we managed to have a pretty good time.

Often in the news, we see this pandemic year compared to the Spanish Flu of 1918, or the 2002 SARS outbreak, or Ebola, or AIDS, or the 2012 MERS pandemic, even the 14th-Century bubonic plague. But I think there is a better parallel in the canine world.

What the COVID-19 pandemic reminds me of is the parvovirus outbreak of the 1970s. I did not experience it firsthand, but heard about it in depth from breeders Mrs. William Potter Wear of Stoney Meadows and Mrs. Peggy Newcombe of Pennyworth. They spoke of breeders who lost entire kennels of purebred dogs because the virus was so contagious, spread so quickly, and was so virulent. Most puppies under five months of age and a percentage of older dogs died when it hit them. The virus emerged in 1978 and killed thousands of dogs worldwide. A vaccine became widely available in 1980. While parvo is still around, it affects primarily unvaccinated dogs. If your puppies are vaccinated, parvo is not high on your list of things to worry about.

The nation’s chief epidemiologist, Dr. Anthony Fauci, has promised that “the cavalry is coming,” and that this is the time to wear a mask, hold fast, and wait until spring. Let’s hope COVID-19 comes off our list of things to worry about very soon.

© Dog News. This article may not be reposted, reprinted, rewritten, excerpted or otherwise duplicated in any medium without the express written permission of the publisher.
Sun, 12/06/2020 - 6:30am