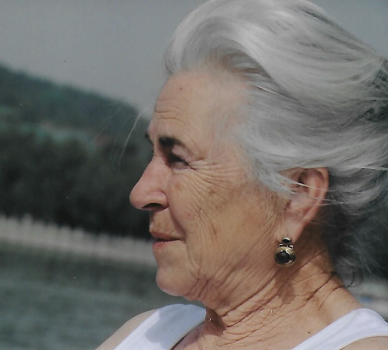 The dog world and Seattle community fondly remember Elaine Young for her many wide-reaching contributions — making a better world for all she touched. A loss, yet an inspiration for all of us. Her ever-present smile, twinkling eyes, classic beauty — hallmarks of her persona.  Definitely opinionated, ever thoughtful, quietly graceful, yet outspoken when appropriate. A lady of many interests and talents, 95 years “young,” she never wavered in her dedication to the canine world and Northwest community.

Dedicated to her community

Olympic and British games track and field star, where Bob Waters (Canadian Mountie) was her body guard and introduced her to the dog sport.

High-fashion model; classic beauty even in her 20s, glorified the ads for furs.

Admired as a master gardener and talented interior decorator.

Respected as a “mover and shaker” in Seattle politics.

Public relations, promotion and board member of organizations, non-profits in the Seattle area (Overlake Hospital, Woodland Park Zoo, Seattle Mayors Advisory Committee, University of Washington School of International Studies, among many others).

A lone Caucasian woman in an Asian man’s world — a member of the tong that oversaw business in Seattle’s Chinatown.

Dr. Jose Luis Payro, president of the Mexican Kennel Club, one of her biggest admirers.

A life member of the Scottish Terrier Club of America, judging the national and regionals on numerous occasions.

Breeder-owner-handler in the “hotbed” of Scottish Terriers in the Pacific Northwest, competing in the breed dominated in the 1960s by Bob Bartos (and his iconic Ch. Bardene’s Bingo).  Elaine’s Scotties included many wheaten and red brindle champions. She also had Fox Terriers, Borzoi, Chinese Shar-Pei, Doberman Pinschers and Whippets.

Promoter of Asian breeds; imported a Shar-Pei who was often at her side in Seattle’s Chinatown.

Always confident and gentle, yet definite with dogs and exhibitors. No nonsense but full of kindness when deserved.

Always a teacher — often seen mentoring groups of juniors, with positive feedback to guide them.

Driving force in the AKC; delegate of Seattle Kennel Club for 17 years. Second woman on the AKC Board of Directors, serving from 1985 to 1991. Be mindful that the AKC did not even admit women to the delegate body until 1974.

Influential in development of AKC National Junior Organization in 1995.

Instrumental in establishment of AKC Museum of the Dog.

Leadership style (“not easy being a new girl in an old boy’s world”), pragmatic, sensible and accommodating only if it served the best interests of the sport and dogs.

With Lana Tsan, developed a purebred canine registry in China and established the China National Kennel Club (part of the Department of Agriculture) holding the government “chop” (authorization). On a ground level, introduced and participated in the nascent sport in many cities in China. Always promoting the canine breeds to the young and aspiring in the communities. A real ambassador.

Founding member of the Judges Education Association of Washington.

Special thanks to Faye Strauss and Vandra Huber for their contributions to this tribute.

© Dog News. This article may not be reposted, reprinted, rewritten, excerpted or otherwise duplicated in any medium without the express written permission of the publisher.
Wed, 01/18/2023 - 3:28pm