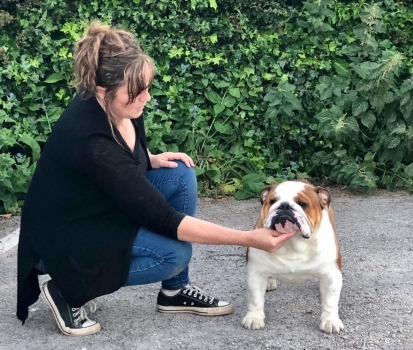 This Spanish-bred Bulldog puppy gets accustomed to the dog-show drill.

Thanks to the Covid crisis, there is a new generation of puppies that have been born to breeders who were isolating. Many of these being hopefuls for the show ring, they have spent the first year of their lives without any kind of socialization or experience off their home property. It is expecting a lot of a young dog to take a show in its stride when it has had no training other than that given by its breeder at home.

When conditions began to ease up, my good friend Mike Wildman, known for his grooming and handling skills, decided that some kind of ringcraft classes were essential so that breeders and exhibitors could give their youngsters a first taste of a “show” environment. So he secured a local village hall with adjacent cricket field and advertised the birth of Burton Village Ringcraft. Mike asked me if I would act as a trainer, along with Margaret Wildman and Sandra Parle, and I was happy to do so. 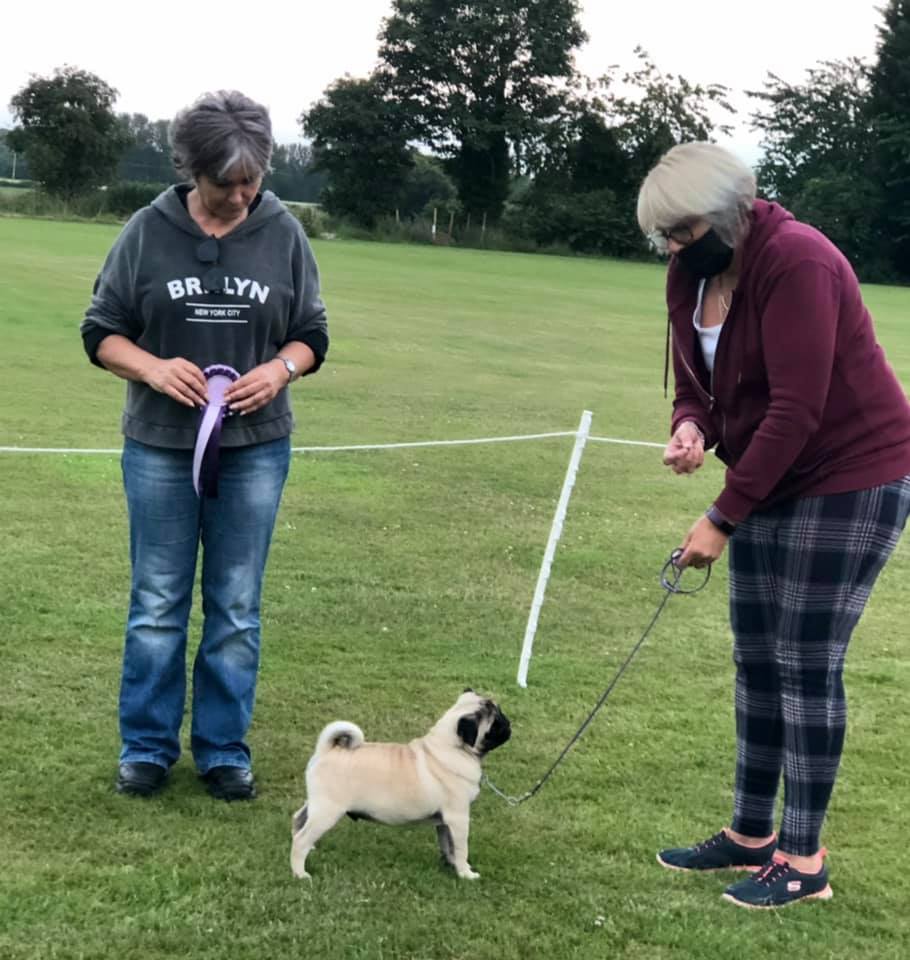 The response was immediate and enthusiastic, and from that first Thursday evening we have seen around 30 dogs turn up each week. Their owners were keen to see how their future stars reacted to meeting other dogs, indoors and out, in a “competitive” environment. Most of the dogs were puppies that had never been anywhere or seen anything. Some of them were young dogs who had started their show careers when the pandemic struck and who needed a refresher. Others were more seasoned campaigners whose owners were keen to discover if they could still remember how to do it.

Some of the owners were complete novices with their first show dog; others were more experienced.

(As an aside, at our first session I got a 2-year-old Affenpinscher dog on the table who made an immediate impact, causing me to think privately that this was way beyond the kind of quality that I had initially expected to find at a local ringcraft class. At the end of the session, I was tempted to say to his owner, “You really should show this dog,” but for once discretion took over as I found her and asked if she had had the opportunity to show her dog before lockdown. I was a little taken aback by her reply as evidently the dog had been to a handful of Championship shows and had won Best of Breed at the last Crufts!)

The atmosphere at these ringcraft classes reminded me of my roots, when I attended weekly evening dog matches, Sanction and Limited shows at South Wales where everyone socialized and got along, enjoying light refreshments and watching the dogs being put through their paces. Many have remarked on the friendliness of the sessions, which prompted one of my more cynical friends to suggest that this was because there was no committee! Maybe she had a point.

I have been surprised by the cross-section of breeds that have attended – from Chihuahua to Mastiff – and the overall standard of the dogs has been remarkably high. Indeed, after a few ringcraft sessions some of them have gone on to distinguish themselves at the first Championship shows we have seen starting up, giving everyone at ringcraft great pleasure.

The Ringcraft has its own Facebook page and, in contrast so much of the unpleasantness that seems to pollute social media, when one of the group posts a show-ring success, others in the group are quick to congratulate and share their pleasure. 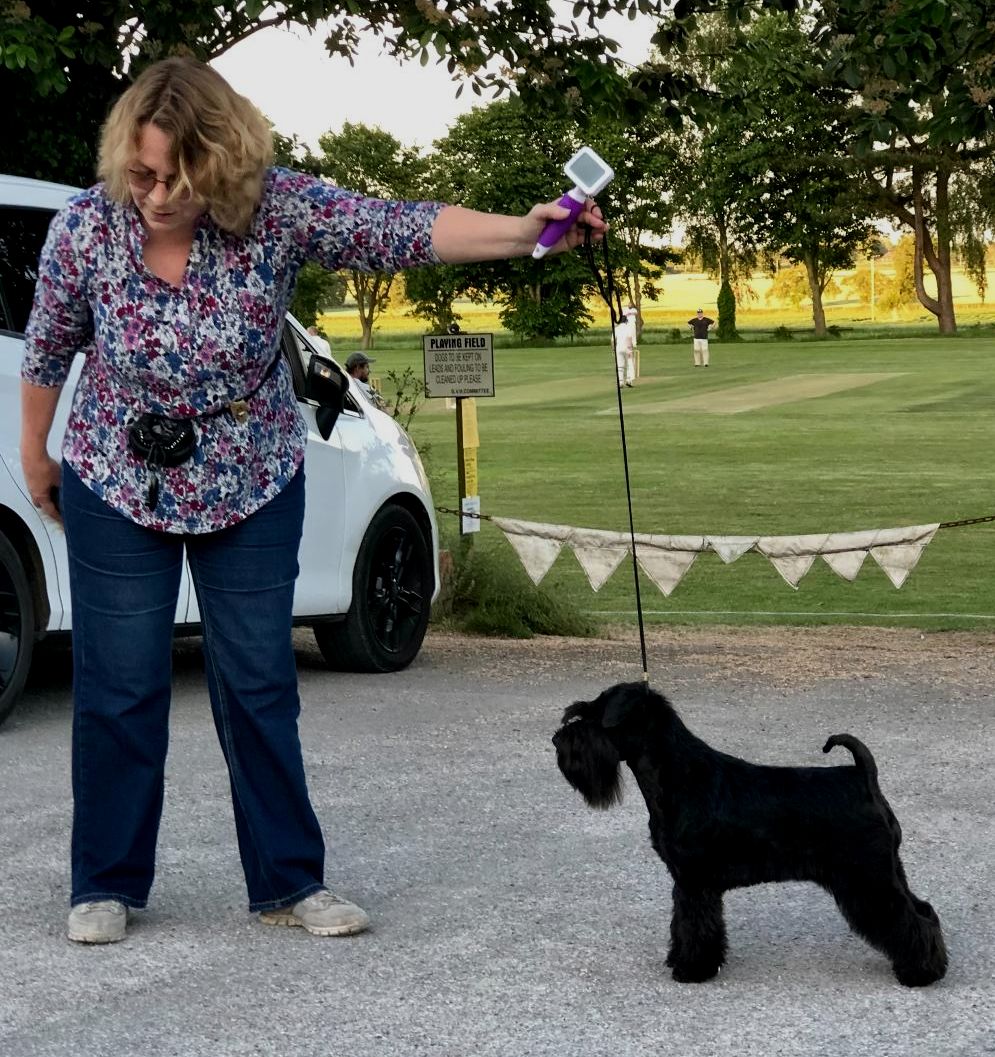 To my surprise we have had several dogs attending that have been imported by their enthusiastic owners – a Bulldog from Spain and a Miniature Schnauzer from Poland made a particular impression on me.

It’s been interesting to study how people handle their dogs, and everyone is different. Looking at the dogs in groups of five, the procedure I have adopted is to complete a detailed hands-on, either on the floor or the table, depending on the breed, then ask for an out-and-back, the dog returning and being allowed to stand completely free. This enables me to see where the dog places its feet naturally and where there is any weakness. They are then asked to move again, returning for the handler to set them up to look as good as they possibly can.

I have discovered that there are some common, quite basic, mistakes made by inexperienced handlers. These include the positioning of the leash around the neck when either stacking or moving, and the placing of the feet when making the final stack. So often forelegs are placed too far forward and hind legs stretched out so that the rear pastern is at 45 degrees rather than the ideal 90. Oftentimes dogs will place themselves in a perfectly acceptable pose, only to have the handler readjust legs without thinking, thus destroying the natural outline. Soft toplines can be discretely tapped up, loose skin on the throat can be gently hidden from the “judge,” and there are lots of little tips that members of the group have never been told before, but which they really appreciate. It’s been rewarding to see how many actually listen to what they are being told and then put it into practice.

We have had a handful of dogs that have been traumatized by vets or previous judges with their inconsiderate handling, and it has been encouraging to see how, with patience and understanding, they have improved week on week.

While there is no “judging” in terms of the breed standard at the ringcraft classes, we do offer large rosettes to the puppy and adult who have made the most progress during the evening, and some of them improve dramatically. The most improved puppy and adult then meet for the Best Improved Performer Overall, so there remains a slight competitive element for those who thrive on it!

I have always loved judging puppies, and while this exercise is not about judging in the conventional sense, one cannot avoid spotting something that has star quality and is a real diamond in the rough. Even at four or five months it is easy for the trained eye to see that a puppy has natural star quality just by the way it holds itself when relaxed, and I have been pleased to see some of these doing so well at their first shows.

We now have people driving for two hours to attend our ringcraft sessions, and numbers are growing as word goes around.

© Dog News. This article may not be reposted, reprinted, rewritten, excerpted or otherwise duplicated in any medium without the express written permission of the publisher.
Mon, 07/19/2021 - 5:19pm