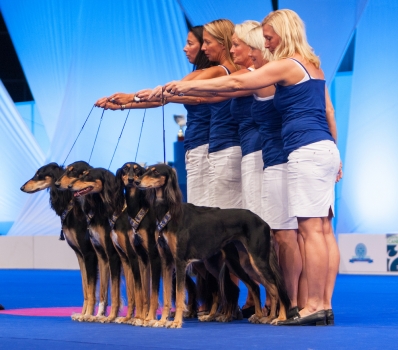 Salukis competing in the Breeders Group competition at the 2011 World Dog Show in Paris.

Getting Back to Basics

Remember, it's Best of Breed, not Best Bet for the Group
By
Andrew Brace

The fallout of the COVID pandemic is now being felt at every level of society, and the world of purebred dogs has been affected as much as, if not more than, any special-interest field. Many countries have basically abandoned dog shows for the immediate future, whereas the USA and some others are trying hard to schedule events under strict guidelines to maintain interest. Many have seen their livelihoods threatened and their social life dramatically curtailed.

With such a patchy covering of shows, league tables and top-dog competitions have rather taken a back seat, and maybe this is no bad thing if the emphasis shifts to what is fundamentally the most important aspect of our sport – THE BREEDS. For many years it seems that the glitz and glamour of the group and Best in Show rings have rather eclipsed the competition that is far more pivotal to any breed’s progress:  Whilst we all love the theater and drama of the “big” events, we should never forget the importance of the humble breed ring, as this is where breeds can be made or broken.

I have often referred to the late Raymond Oppenheimer’s outlandish theory, frequently voiced by this guru of Bull Terriers and one-time chairman of the British Kennel Club’s Judges Committee. It may sound far-fetched, but when you analyze the thinking behind it, Raymond’s fantasy makes so much sense. He suggested – with his tongue firmly planted in his cheek – that when someone expressed the desire to become a judge, given that they had a solid background in purebred dogs, they should be invited to judge Best in Show. He felt that this assignment would give them the opportunity to select the best of a small number of dogs that would in theory be outstanding specimens.

Then, having acquitted themselves satisfactorily in several Best in Show rings, the ascendant judge could be invited to judge a group. Here their knowledge would be tested much more intensely, but again they should be evaluating the merits of dogs that were of a high standard.

Raymond then opined that, given success at group level, a judge could then be entrusted with judging a BREED, because this is the most important job of all, requires the deepest knowledge, and can do the most good – or harm!

Obviously it is hopelessly impractical, but there is a logic behind it that bears thinking about.

Group and Best in Show competitions are based on the foundation of breed judging, and it is the breed judges who have the task of sorting out an entry of dogs of varying merit, hopefully being ever conscious of the need to reward the dogs who are best positioned to take a breed forward.

To this end, it is imperative that breed judges are not only fully acquainted with the words of the relevant breed standard, but should be aware of the history of the breed – why it was developed and what role it was bred to fulfill. Only when a breed has been fully researched will the breed standard actually acquire real meaning. When one appreciates the background of a breed it is far easier to understand why the physical construction is as detailed in the standard, the necessity for a specific kind of movement, and the importance of breed-specific character and temperament. All of these components contribute to BREED TYPE, the first essential in any great show dog. We hear so much about pizazz and glamour, showmanship and star quality, yet without classic breed type a dog betrays its breed.

At this point in time we have countless breeders and exhibitors who are sitting on puppies that may never see the inside of a show ring until they are Juniors or, God forbid, older. As their owners stare lovingly at them on their property, religiously training and grooming, I am sure that, rather than thinking in terms of potential group winners, their first thoughts are now how these dogs will measure up against the new competition produced by other breeders during the same period.

Many breeders will have had a year away from shows when they have not had the opportunity to look at the competition, so there has been no chance to make comparisons. They have been looking at just their own dogs for months on end, so the luxury of getting in a competition ring cannot come soon enough for them.

When breeders get swept away with the appeal of producing a big-ring dog, there is often the temptation to get priorities muddled. When it comes to sorting out a litter and determining who is to be the “keeper,” are they focussed on breed characteristics, or are they sometimes drawn to the “showman”? Of course the master breeder is always aiming for that magical combination where a hopeful not only fits the breed standard to a T, but has the temperament to make it a seasoned campaigner. In reality we all know that sometimes compromises have to be made.

This sustained period of isolation has also denied breeders the opportunity to invite friends and peers to look over litters on the ground, discuss and exchange opinions as to their puppies’ individual merits. No one sets out to be intentionally kennel blind, but enforced detachment from conformation competition does make this a real risk.

So, it is perhaps timely to remind ourselves of the importance of the breed ring and the consequences of our awards. All judges should be determined to seek out the specimen that best serves its breed, now and in the future, and never forget the wording on the award, which is simply BEST OF BREED and not BEST BET FOR THE GROUP.

© Dog News. This article may not be reposted, reprinted, rewritten, excerpted or otherwise duplicated in any medium without the express written permission of the publisher.
Mon, 03/08/2021 - 3:40pm