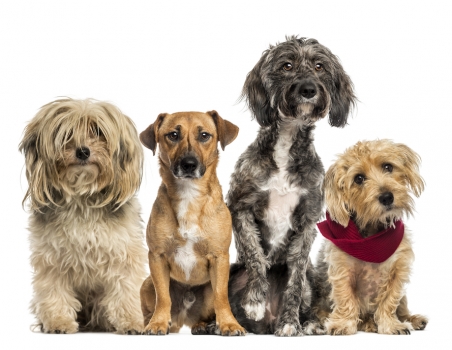 Talk about “light the blue touch paper and stand well back” … !

Yesterday I read the news of the AKC’s decision to begin a pilot program to allow the use of crossbred dogs in Junior Showmanship competition. Dog News was quick to broadcast the issued AKC press release on the subject. My reading of it prompted me to make the following post on my Facebook page:

“Now here’s a conundrum ... When I first read this announcement my reaction was entirely positive if this encourages more youngsters into a sport that is badly in need of new blood. Then, when I thought about it, given that Junior Showmanship competition is all about handling dogs to advantage so they best represent their breed in the context of the breed standard, against what standard can a crossbreed be judged?”

Almost simultaneously, and totally independently, Simon Parsons – former editor of Dog World newspaper – wrote a more lengthy post on his Beyond the Doghouse page, asking for comments. Then all hell broke loose! I don’t recall any announcement in recent years causing so much immediate reaction and demonstrating a wide variation in opinions.

Let’s rewind half a century. I first competed at a dog show when I was eleven years old. I had just become the proud owner of my first Boxer and had begun going to dog shows. At a local Open show some friends of my Boxer’s breeder asked me if I would like to show their champion Boston Terrier in what was then referred to as the “Child Handling” class. I was thrilled and excited, and honored to be offered the chance to handle such an established winner. The owners of Ch. Mabrocks Mr Wonderful gave me some simple lessons before we entered the ring (in those days one simply entered on the day and there was no catalog entry for this class). I was given a handful of bait and wished good luck.

Back in the day these classes were not really taken seriously and were frequently judged by the local mayor, a passing celebrity or whoever had the time – no experience in purebred dogs was necessary, and the whole charade centered around the “cute” factor. Even as a kid competing for the first time, I thought it pertinent to look around the class and see who was the handler to beat! Never in my wildest dreams had I considered the eventual winner … a diminutive ringletted blond girl in a fluffy pink dress and bobby socks who was towed around the ring by an uncontrollable Great Pyrenees, much to the obvious delight of the crowd.

Since that time I have seen Junior Handling classes here in the UK (and subsequently overseas as my judging career progressed and I began to travel) become much more disciplined. Some years ago we went through what I always considered a ridiculous fad of asking Juniors to perform Ls, Ts, Reverse Gs and various other complex “patterns” when moving their charges, to such an extent that the whole thing became more ballet than show handling. This was accompanied by the swell in emphasis on young handlers’ attire, and shares in the red-suit market went through the roof.

Thankfully this is now a thing of the past in most advanced countries where it is accepted that Junior Showmanship is what it should be about – young people handling dogs to the best of their advantage to emphasize their breed characteristics, just as they would do if the dog was being shown in normal competition. This requires stacking (manual or free) as is traditional for the breed and moving the dog in an attempt to display breed-specific gait. It should be understood by both Junior and Judge that the overall quality of the animal is never a consideration; simply the ability of the youngster to create the best possible picture representative of THE BREED.

Over the years the standard of junior handling gradually improved to the level it is today when, all over the world, youngsters can be found who display amazing talent and in many cases put their elders to shame. One only has to watch the International Junior Handling Final at Crufts each year to see how impressive our young enthusiasts are. And nowadays so many countries are represented: At the most recent Crufts, handlers travelled from 37 different countries for the event, which is always hotly contested.

Nowhere is the level of junior handling more skillful than in the USA, hardly surprising when one considers that the purebred dog sport in the States is very much a culture of professional handlers. Here there are so many professionals who have been successful in their field for many years, so there is a ready bank of potential mentors and role models.

As I understand it, one of the reasons that has been put forward for including mixed breeds in competitive Junior Showmanship at AKC events is that many youngsters or their family might not own a purebred, and there is a requirement that dogs handled by Juniors should actually be owned by them or their immediate family. This is possibly the major stumbling block. In any other country if a junior was sufficiently interested to attend a dog show it can be safely assumed that they have friends or relations who are already involved with the fancy. This would, elsewhere, lead to them being coached by Uncle Bob, Aunt Joan or Mrs. Goodbody next door who would happily lend them a purebred dog to compete with in the Junior Handling competition.

When suing seems to have become a national pastime I understand that there needs to be protection on all sides should an “incident” occur involving a dog, but surely with all the legal brains that AKC can access would it not be possible to draw up a watertight document to cover all eventualities that could be signed by the dog’s registered owner?

At this point let me stress that I have for many years been one of the strongest supporters of Juniors and have frequently written about the need for us to encourage and help any young people who show an interest in the sport, as we constantly need new young blood if the sport is to survive. Few judges have awarded more Challenge Certificates than I have in open competition to “children,” so I am obviously in favor of doing anything that tempts new youngsters into our world. That said, I am a fierce defender of the purebred and applaud the AKC’s Mission Statement that appears at the front of its Junior Showmanship booklet:

“The American Kennel Club® is dedicated to upholding the integrity of its Registry, promoting the sport of purebred dogs and breeding for type and function.”

My Facebook post brought forth a flurry of comments, some in agreement, some criticizing me for not welcoming the opportunity to bring new people in. As is so often the way with social media, when you read some comments you wonder whether the writer has actually READ the original post. I have zero issue with anything that encourages new entrants to the world of the purebred, but I do have a problem with anything that devalues the purebred concept. God knows we have been struggling for years as the animal-rights lobby have been riding their crossbred and rescue warhorse, and more recently we have had the commercially motivated designer crossbreeds to contend with. We need to do everything within our power to maintain the integrity of the purebred and pedigree.

My concern has nothing to do with recruitment; it centers around the need for Junior Showmanship to mirror the handling abilities required in the regular conformation ring. The aim is for the subject dog to be handled in such a way that its breed type, construction, balance, character and gait are emphasized in the context of the relevant breed standard. How can any young handler do this with a crossbreed?

I have heard it said that crossbreeds will be judged and should be handled like the breed they most resemble. Much as I am loath to dignify these designer crosses by even mentioning their “name,” I have seen many dogs in my area whose owners claim they are “Cavapoos.” (You can work out their parentage from that!) No two look alike, some bear no resemblance to either of the parent breeds, and, if you were to use the cited yardstick, when the Cavalier and the Poodle have such different tail sets and carriage, for example, how should the crossbred offspring’s tail be ideally carried?

If we return to the AKC’s own Junior Showmanship booklet we read:

“Section 3. Standard for Judging. Junior Showmanship shall be judged solely on the ability and skill of the Juniors in handling their dogs as in the breed ring. The show qualities of the dogs shall not be considered.”

Perhaps, if some believe that encouraging youngsters to come to AKC events with their mutts is the way forward, should they not be introduced to the other disciplines such as Agility and Obedience? If they are desperate to become involved with handling per se and the ownership requirement persists, maybe there is room for a separate competition to be developed where basic and non-breed-specific skills are tested, e.g. sympathetically setting up a dog with a leg in each corner, capitalizing on its construction, and moved in a manner that demonstrates coordination and confidence?

Some of the comments I read on Facebook have been rather dramatic – claiming that this pilot scheme was “the beginning of the end” may be something of an exaggeration. However, I do believe that at this point in time it is vitally important that we take pride in our purebreds and promote them to the best of our ability. This suggestion, I fear, does not serve that purpose, and there are plenty of alternatives.

© Dog News. This article may not be reposted, reprinted, rewritten, excerpted or otherwise duplicated in any medium without the express written permission of the publisher.
Wed, 02/03/2021 - 7:16pm