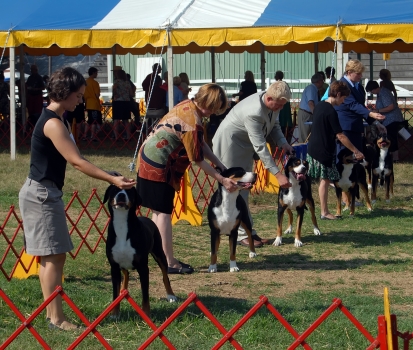 Dog shows as we once knew them will eventually come back. Will exhibitors return with them?

Preparing For the “New Normal”

… and keeping exhibitors along the way
By
Andrew Brace

As we reflect on Year 2020, few of us will look back on the past 12 months with great fondness. For those involved in dog shows in whatever capacity, this year has been one of famine, with many countries abandoning dog shows completely, others running events during the later months of the pandemic in a reduced form.

It has been interesting to hear varying opinions on how our sport will change when we return to some degree of “normality,” and several of my friends have spoken of the record-breaking entries they anticipate when our major shows resume again. Personally I take a slightly different view – and I have always been a “glass half full” kind of person – but I genuinely believe that months of isolation will see some exhibitors leaving the exhibition world or reducing their activities.

Lockdown has shown many people that they have extra time to spend with their family, completing overdue repairs to their home and kennel, putting very few miles on their vehicles, and at the end of the month seeing a notable increase in their bank balance. When they have the chance to resume their exhibiting activities, will they really want to go back to spending time and money chasing around the country for what is, at the end of day, a ribbon or a piece of cardboard? I think in many cases not.

This will mean that there will be a big gap and fewer supporters of our shows, and show organizers will really need to think hard about how they can keep exhibitors’ interest and indeed attract new faces to dog shows. This means a serious rethink of what makes dog shows attractive and what are exhibitors’ priorities when they come to enter a dog show.

Furthermore I believe that many judges will be rethinking their schedules when dog shows resume on a regular basis. Not many relish the idea of judging when wearing a safety mask; this is a discomfort that is bound to affect concentration to a degree. Will judges want to carry on with this inconvenience? Then there is the prospect of flight and travel inconveniences that will be bound to increase. These are just some contributing factors to what will be a reduced pool of judges.

Several years ago Frank Kane wrote a hard-hitting article in the British dog press that caused a widespread reaction by suggesting that falling entries are not exclusively attributed to the economic recession, but that ineffectual judging must take a large part of the blame for disillusioning exhibitors.

The fact that someone of Frank’s standing had gone into print and not pulled his punches made the observations doubly concerning. He is without doubt one of the world’s best respected all-rounder judges whose integrity and conscientiousness are unquestionable. Furthermore he is an acclaimed author, deeply involved with the Kennel Club judges’ educational program, an Accredited Trainer and a former Crufts Best in Show judge.

Within hours of Frank’s article appearing in Dog World, Facebook was already buzzing with responses, the common thread being that many exhibitors felt that they were seeing more and more judging where dogs were not being assessed knowledgeably and impartially.

The accusation of “face judging” has been rife ever since I first began going to dog shows in the early ’60s. It is nothing new. However Frank made the point that at a time when education for judges in Britain has never been more intense, why should we see so much unsatisfactory judging?

He touches on a point that I have always referred to in my own judging seminars, and that is the fact that judges are human beings, subject to human frailties and weaknesses. Most of the books that have been written on the subject treat dog judging as a simple science, spending much time discussing type, balance and angles, but never taking into account the fact that the person standing in the ring is actually human.

One of the toughest aspects of judging is cultivating the mindset that enables someone to judge dogs totally cold, ignoring the handler, the dog’s pedigree and its past wins. I remember when I first began judging, one of my mentors telling me that if I encountered a dog that I did not particularly like, I should imagine it being shown by my best friend. Did I then notice some redeeming features? Similarly, when I had a dog that I really enthused over, imagine it being handled by my worst enemy. Was it still as exceptional as I thought it was? This might seem like rather topsy-turvy thinking, but it is an excellent way of teaching new judges to look at dogs equally and focus on the dogs to the exclusion of all else.

The judging process in the UK requires judges to progress slowly through breed club judging lists, acquiring more classes and more dogs at the smaller Open shows, as well as partaking in the various Kennel Club examination procedures. No judge will be approved to award Challenge Certificates at a Championship show in their first breed before they have actually been judging for a minimum of seven years, so the apprenticeship is a lengthy one. There are many boxes to be ticked so that all the Kennel Club’s requirements are met.

Having a good basic knowledge of a breed is obviously a must before a judging career is contemplated, but however well someone knows and understands a breed standard, that knowledge is only of use if it can be put into practice with fairness and integrity, two qualities that can never be taught. One of the most important things a fledgling judge must learn is the ability to detach each dog from its handler and assess it free from mental baggage.

I have attended many breed judging seminars, in various capacities, which have included a practical session where candidates have to evaluate dogs of varying quality. Such sessions have made a point of placing dogs with different handlers from the usual, which in practice meant that “famous” handlers would possibly appear with a dog of pet quality, whilst novice handlers could be given a great one. Armed with this knowledge beforehand, the student judges certainly focused on the matter at hand and frequently fared well. However, sad to say, I have subsequently watched successful students judging at “real” shows when the ability to judge dogs impartially seems to desert them. Clearly they are influenced, even intimidated, by the sight of a dog handled by someone they see regularly winning at top level, regardless of merit.

Let me stress that often the “face judging” accusation is made by embittered novices who fail to recognize the shortcomings in their own dogs. It is far easier for them to blame the judge for judging at the wrong end of the leash than to accept the truth ... this being that the handler in question has been breeding for 20 years or more and has consistently produced excellent dogs. However, that is not always the case.

Frank Kane referred to the age-old fable of “The Emperor’s New Clothes,” which can easily be applied to the dog world. We have all seen well-established exhibitors appearing in the ring with what they purport to be their next great one when, in truth, it is nothing more than average. Given a few wins under judges who are easily swayed by a familiar face, the dog gathers momentum; those judges talk up the dog to other judges who are equally weak, and before you know where you are the dog is on a roll.

When a new judge meets such a dog, it takes a great deal of intestinal fortitude to go out on a limb and down the winning dog to a superior competitor for fear of reprisal, but this is what they have to do, given that there are superior dogs present.

The British dog scene is a relatively small and incestuous place. Everyone pretty much knows everyone, and the top dogs tend to meet regularly at the same shows. There is also a great overlap between exhibitors and judges, most judges in Britain being one-breed “specialists.” Consequently most judges, new and experienced, will know the show record of most dogs, the profile of their handlers and in some cases their breeding. The subconscious pressure can be huge.

There is an added complication that has been mentioned to me by several up-and-coming judges, and that is the power that is wielded by those involved with breed clubs. It has concerned me to hear people openly admit that when they have been faced with well-known and forceful exhibitors who carry a lot of weight with breed clubs (and therefore with those clubs’ approved judging lists), they have been swayed. That is both sad and worrying. It is regrettable that some people who are involved with the running of breed clubs often put personal agenda before the good of THE BREED.

The judge’s lot is not a happy one, and the center of the ring can be the loneliest place in the world. It takes great strength of character to survive. Given that a judge honestly thinks a “well-owned” and “well-handled” dog is the best on the day, they get accused of “face judging.” When a judge genuinely finds a superior dog from nowhere and puts it over the big winner, they are accused of giant-killing or being sensational. You really can’t win, but at least judges should be able to go home and sleep nights with a clear conscience.

Another source of discontentment that has surfaced stems from the fact that there is this huge overlap in Britain between judges and exhibitors. Whilst some of our busiest judges made the conscious decision to retire from exhibiting when they found themselves judging more and more, others are regularly seen showing their own dogs or those of their partner or spouse. Then there is of course the “cosmetic transfer,” where dogs that are in reality owned by a well-known judge are transferred into the “ownership” of a friend or relative. Watching a judge officiate in one ring when their dog is being shown in the next (albeit in a different “ownership”) does not sit easy with the rank and file.

Evidently it does not rest easy with some factions of the exhibiting public that one member of a relationship is wining and dining with the other judges at the selected hotel the night before their partner is seen winning Best in Show. Whilst there are seldom claims of dishonesty or wrongdoing, there are plenty of suggestions of the perception of impropriety.

Clearly there is plenty of dissatisfaction about judging at a time when there should be less. One of the commentators on Frank’s original article suggested that judging was of a much higher standard when judging invitations were issued at the suggestion of the “breed elders” and based on observed and noted ability, rather than on paper qualifications. Maybe they have a point.

© Dog News. This article may not be reposted, reprinted, rewritten, excerpted or otherwise duplicated in any medium without the express written permission of the publisher.
Tue, 01/05/2021 - 3:26pm