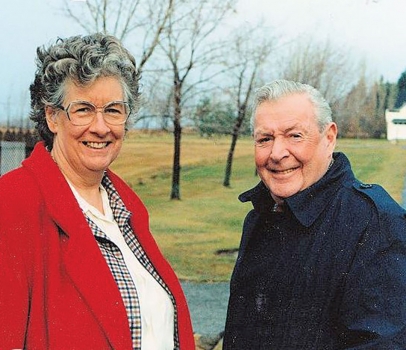 I read with a very heavy heart of the passing of one of the truly iconic figures in the modern dog world, Ferelith Somerfield, known universally as “Feffie,” someone who wore so many different hats within the sport, but playing each of her many roles with dedication, integrity, style and yet great humility.

Few, if any, were more respected as a judge of the many breeds that benefitted from her knowledge and flair when in the center of the ring. Every exhibitor knew that any win awarded by Feffie was based entirely on their dog’s merit on the day, as nothing else was a consideration. An award from Feffie was one to be valued and treasured.

I got to know her well through writing a weekly column in DOG WORLD for more than 30 years, the original invitation coming from her husband Stafford Somerfield. In her capacity as a journalist she was both fair and fearless, and set standards that others tried hard to follow. Feffie believed in justice for all.

The photograph I have featured is chosen deliberately. It has always been one of my favorite shots of Feffie and one of her dearest friends, Nigel Aubrey Jones, who was both my idol and mentor. Nigel and Feffie shared a deep friendship over many years, had so much in common and their thoughts about the purebred dog world (and those involved in it!) were very similar. I took the photograph when we were staying with Nigel and Bill at their Canadian home, and it was a most memorable visit. Listening to these two talk seriously about dogs was a pure masterclass, but they both had the same sense of humor and could be quite “naughty” when in the right company. I can only imagine the laughter that is being shared on their reunion beyond the Pearly Gates.

Feffie gave so much to so many; she was a true role model, and we will never see the likes of her again.

No one could express the thoughts of so many of us better than her protégé, colleague and close friend Simon Parsons, who wrote earlier today:

“Bryan Mitchell has kindly let us know that Feffie Somerfield died this morning.

“Of course, for all who loved, admired and respected her, there are tears to be shed, but realistically one must also be thankful that she is free from the cursed affliction that she has borne in recent years. Several cases of Alzheimer’s among family or close friends have brought home to me the continuing hatefulness of this disease, with vibrant, brilliantly intelligent people such as Feffie just as prone to be affected as anyone else.

“I will write in more detail later, but no one I’m sure would quibble with me when I say she was held in as universally high regard as anyone in the world of dogs. Many will best remember her as the most straightforward, honest and informed of international all-round judges, with a pleasant, well-mannered yet authoritative ring manner.

“The daughter of one of Britain’s most versatile breeders, Diana Hamilton, she had the great advantage of growing up surrounded by top-class dogs, and even with the busiest of schedules she retained her practical involvement with several breeds, notably of course Cairn and Irish Terriers and Boxers, throughout the years.

“For others it was as a journalist they will recall her, building up Dog Word’s reputation for fair-mindedness and an ability to look at all sides of any issue, with added spice and punchiness coming through the influence of her husband, the inimitable Stafford Somerfield.

“She was also much involved in the administrative side of the dog world, via several breed clubs, through many years of service to the Ladies Kennel Association, most recently as president, and on the Kennel Club Judges Committee.

“For all of us she was a loyal friend, a mentor and someone whose high standards one tried, often in vain, to emulate.

“Our thanks must go to Bryan for his care for her since they moved to Malvern. I understand that there won’t be a funeral – I for one will think of her next time I arrive at a show and be thankful for all she did for the sport she loved so much.”

© Dog News. This article may not be reposted, reprinted, rewritten, excerpted or otherwise duplicated in any medium without the express written permission of the publisher.
Fri, 06/03/2022 - 1:06am