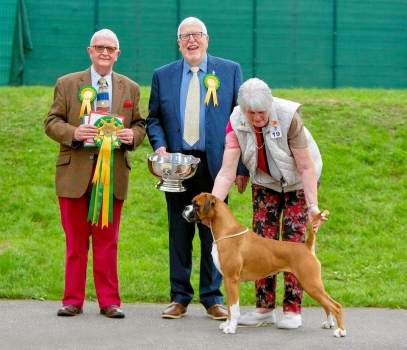 It's All About the BREED

Having been subjected to more than a year of on-and-off lockdowns with no dog shows at all, when post-pandemic shows began to be organized here in the U.K., there was widespread speculation that the first all-breed Championship shows would attract huge, record-breaking entries that would be difficult to manage, so desperate would exhibitors be to get back to showing their dogs.

Somewhat cynically, I had other ideas. I firmly believed that a long period away from shows would make those previously involved take stock, examine their bank balance, and soon realize that they had saved an absolute fortune by not going to dog shows, traipsing up and down the country chasing pieces of cardboard and ribbons.

Well, the shows started back, and with them came a total rethink on the Kennel Club’s part in that they relaxed their firm policy of never allowing more than one set of Challenge Certificates to be on offer for any breed on the same day. Breed clubs that had missed out holding their specialties were allowed to run shows in conjunction with the mighty all-breed events, and some of the big shows were allowed to run two shows on the same day. Suddenly exhibitors were swamped with multi-show weekends (not a novelty for my American friends, but very much a new concept in our sainted isle!), and the famine had become a veritable feast.

The entries were interesting. Very few people are in a position to take a few days off away from home, and if they are, hotel accommodations when travelling with dogs come at a price. Some breed entries remained fairly static, some plummeted, and the majority seemed to be slightly lower than they were pre-pandemic. It was sad seeing some reasonably strong breeds attracting single-figure entries in a sex where Challenge Certificates were on offer.

Some of the all-breed shows that had the luxury of breed specialties being run at the same venue and time obviously benefited from this, and their entries were up on what would have been expected had they been run in isolation.

As the all-breed shows got underway so the race for Dog of The Year resumed, with certain dogs getting on a roll, and somehow the focus seemed, more than ever, to be what was happening in the Group ring and beyond.

Now anyone who is a Facebook user and who visits large dog shows regularly could be forgiven for thinking that the most important part of the show is the big ring where Groups and Best in Show are judged. The way our shows have evolved, and the change in exhibitors’ mentality, have encouraged that assumption. (You only have to look the proliferation of bragging posts where Group and Best wins are being highlighted; more often than not the poor judge of the breed seldom gets a mention.)

However, we should always remember that variety competition – where different breeds compete with each other – is an inexact form of judging. You cannot directly compare a Chihuahua with a Great Dane; you evaluate the subject dog against its own breed standard, see how it measures up, and place accordingly. It is actually a subtle variation on the points system that was long ago present in the breed standards.

We all love the glamour and the razzamatazz of the big ring, and have had to get used to the loud music, spotlights and elaborate floral displays, but at the end of the day this has become something of a circus.

What we should always remember is that the most important part of any dog show is THE BREED RING, as this is where dogs can be judged directly against their competition. I believe that this is sometimes overlooked, especially when judging panels are formulated: All too often when looking at show schedules (premium lists to those in the U.S.), one gets the distinct impression that some breeds have just been “tagged on” to judges who have no great interest or experience in the breed concerned just to pad out their day and make the show more economically viable. Is sufficient thought given to the appointment of judges for THE BREEDS, as it is in the breed ring where breeds can be molded, and indeed changed, as a result of the breed judges’ decisions?

The late Raymond Oppenheimer was one of the few geniuses I have ever met and befriended. He was passionate – no, he was obsessive – about his beloved Bull Terriers, a breed in which he was considered the Godfather. However, beyond his own breed he possessed infinite wisdom and common sense, much of which has thankfully been committed to print.

Raymond once discussed with me a theory he had about the progress of judges. On the surface it appears completely outlandish, but when you analyze the thinking behind it, there is much value in Raymond’s reasoning.

He suggested that when anyone first expresses an interest in judging, they should be invited to judge Best in Show at an all-breed show. In the Best in Show ring there will hopefully be excellent examples of the breeds in contention, some better than others, and whatever the judge’s decision, he can do no great harm. Having fulfilled several Best in Show appointments satisfactorily then, Raymond opined, the judge should be invited to officiate at Group level. When they have acquitted themselves well in several Group rings, THEN, and only then, should that judge be trusted with an appointment to judge THE BREED. Raymond expanded that it is in the breed ring where judges can actually shine and demonstrate their absolute knowledge or, conversely, do the most harm.

Impractical and outrageous as it may sound, there is a lot of merit in the thinking behind it.

So, whether it be when judging panels are being formulated, or win ads being composed, we should never forget that the foundation of our dog shows where breeds can be helped or hindered is actually the breed ring – which may be in some far-off corner of a showground and a very long way from the limelight.

I recently had the pleasure of judging bitches at a stand-alone Boxer specialty where the entry was, by present standards, a very reasonable 84, and thoroughly enjoyed my day being back with my “heart breed,” which is populated by one of the most sporting bunch of exhibitors. An eager ringside spectator was Liz Cartledge, one of our most popular all-rounder judges, whose home isn’t far away from the show venue. During a break we had a catch-up chat and, quite coincidentally, Liz expressed the opinion that the all-breed shows were unlikely to ever return to their former glory. She further suggested that the future of our dog shows – if they are to have one – could rest with the breed club events, as these are the shows that will continue to attract vigorous support from the grass-roots people who feel passionately about their breed but seldom think about Group and BIS wins.

On the drive home I reflected on that conversation with Liz and concluded that she could well have a very valid point. At the end of the day, it is THE BREED that is all important, and if the pendulum does swing back to breed events becoming the mainstay, will that be such a bad thing?

© Dog News. This article may not be reposted, reprinted, rewritten, excerpted or otherwise duplicated in any medium without the express written permission of the publisher.
Fri, 11/12/2021 - 5:30pm