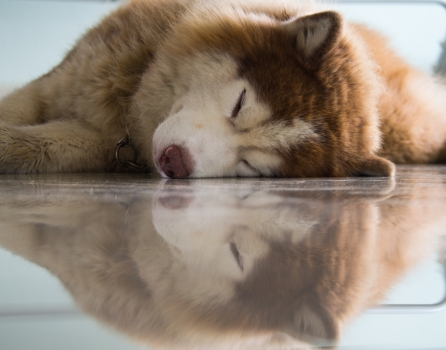 The coronavirus pandemic has rocked our world; not just the dog world, the world.

Almost overnight things changed, and we suddenly found ourselves living in an environment and atmosphere that were totally alien. Thanks to the wonders of the internet, we were immediately flooded with information, but much of it misinformation, and as so many news items seemed to be contradictory there was widespread confusion. Anticipation of nobody-knew-what created panic buying on a ridiculous scale, causing hardship and stress to the needy and vulnerable. We are still very much in the dark as to the future, and everyone is taking life one day at a time.

Most people still have time on their hands, more time than they can ever remember as travel continues to be limited and many are now working from home – either wholly or partially. Those who have dogs to care for will not have time to get bored, but they will have the opportunity to paint and renovate kennels, spring-clean quarters, all depending on the availability of raw materials of course.

One very positive activity that dog people could consider is a thorough spring-clean of photographs (of the pre-digital variety), as everyone has boxes of pictures tucked away, some more important than others. Dog people often forget how important their photos could potentially become in future years, and I have often visited great breeders when researching articles or profiling kennels and have been amazed how few old photos are actually identified. This can be very frustrating, and we are all guilty of it.

It is interesting to see old photographs cropping up on Facebook, the posters keen to identify the dog and the people featured. If only someone had the presence of mind to simply list these details on the reverse of the photograph. Spend a day digging out all your photos. Sort out which you want to keep and which are no longer of any use. Many will end up in the trash, I’m sure. Of the keepers, sort them into some kind of organized groups and identify these on the reverse. After your time this will be invaluable to those who end up with the photographs.

On that subject, at the risk of sounding morbid, have you updated your will? Dog people can be very remiss in this respect, but it is very important. If your immediate family is involved with your interest in dogs it might not be as critical, as they will know your wishes as regards actual dogs and all the memorabilia accumulated over the years. However, many of us have no family that share the interest and so we should think about what will happen to all our “stuff” after we’ve gone.

In my case all my doggy items are left to a close friend, either for him to keep himself or to pass on to individuals who will value them. There are still enthusiasts of a younger generation who would treasure old books and photographs, so it would be very helpful if all photographs were clearly labelled.

The lockdown and isolation have, unfortunately, seen more division within our sport than ever before on many different levels. There are those who miss dog shows so much, particularly those who have a new puppy they have been dying to bring out for the first time, that they want dog shows to resume as soon as possible, regardless. Many claim that dog shows can be run as usual while still observing social distancing and other COVID-19 guidelines. Personally I couldn’t initially see how it can be possible, and, really, do you want to go to a dog show where you cannot set up immediately next to your best doggy friends, hug those you haven’t seen for ages and enjoy a drink with the people in your breed?

Some dog shows have now gone ahead under the stringent safety guidelines, but yet again dog people showed themselves up as huge divisions appeared on social media. There were those of the “Let’s get back to normal and have our shows” brigade and then those who opined “Are you crazy? You are jeopardizing your own health and that of others.”

Many take the COVID threat very seriously. Some will have lost friends and relatives as a result of its spread. They are perfectly happy for dog shows to be suspended – at least until the end of the year. Dog shows are not usually a matter of life or death, but in this unique situation they actually can be.

Another area where there has been unbelievable difference of opinion and heightened emotion is that of online virtual “dog shows.” Many breed clubs and kennel clubs have organized photographic competitions for their members where dogs are “judged” on the strength of their photographs.

The concept of photographic “dog shows” is not new. For years – even before the internet – competitions were held where dogs were “judged” on the strength of a photograph for a variety of reasons and causes.

Of course anyone with half a brain cell would realize that the actual process of judging dogs involves far more than studying a photograph. Judges assess every aspect of each dog entered, and this requires studying the overall picture of the dog, examining every physical component in a hands-on, evaluating movement, temperament and general deportment. It is a complex business. In the past few months the subject of these photographic online “dog shows” has been much debated, demonstrating that yet again opinions are dramatically divided. Some of the opinions have been very strongly expressed by moral guardians who clearly feel we need yet more legislation for judges!

My own view of these “competitions” is that – in the context of the current pandemic – they serve to interest people who miss attending dog shows and to an extent are also an educational tool for those who have an interest in breeds other than their own. They have to be viewed as what they are.

In some Facebook groups that are centered around judges, there have been some truly venomous attacks on the concept of online “judging,” with some taking a ridiculously pompous attitude towards them. Some judges have said that participating in “online judging” is demeaning for “people of our status” (!), occasionally actually calling for people who do get involved to be disciplined or suspended by their kennel club … for heaven’s sake!

My good friend in Australia, John Bryson, who is heavily involved with running the Sydney Royal show, which was obviously cancelled this year, decided to organize an online show and asked me if I would judge it. Each breed was given just two classes – Open Dog and Open Bitch – and each “exhibitor” was asked to submit three photographs … a head study, a standing show pose and a shot of the dog moving. Every dog that was entered would receive a written critique, Best of Breed would be awarded in each breed, and then groups and Best In Show would be judged as at a real dog show.

In critiquing the dogs entered, I simply passed my opinion, based entirely on the photograph/s submitted, and then placed them accordingly. Hopefully everyone accepted it for what it was.

It all seemed very straightforward, so on April 5 I began my task. However I hadn’t anticipated the size of the event, as there were 800 dogs entered … that’s a lot of critiques! The job proved more challenging as not everyone had forwarded the three shots, some choosing to submit just one of the three options. Furthermore the quality of photographs varied dramatically, which made “judging” a little more difficult.

However, the exercise proved very interesting. It gave me the opportunity to look at some beautiful photographs of excellent dogs, requiring a refresher read-through of many breed standards and putting the judging brain into gear once more. As in real-life dog shows, there were some hair-splitting decisions to be made and many compromises. As to the critiques, if you find it hard ensuring that critiquing 40 dogs doesn’t become repetitive and trying to be breed-specific, try it with 800!

The exercise proved a great success, and over the following weeks I received numerous Facebook messages from those who had entered, thanking me for their critiques and awards. It was hard work, but it served a purpose; however, some of my friends were still very dismissive of the fact that I would get involved.

The world (not just the dog world) is in crisis. We are facing a viral pandemic that has changed the way we live and brought many of the activities we take for granted to a grinding halt. To many, attending dog shows is a big part of their life – to some a profession, to many more a hobby and the center of their social life.

Pandemic aside, the purebred dog world now has to deal with huge opposition from the animal-rights lobby that would see the extermination of pedigree dogs and the end of dog shows. They have vast budgets to fight against us and now, more than ever, dog people should be uniting and sticking together. Yet on a daily basis it seems that the dog world is intent on destroying itself with no external help from PETA and the like, as Facebook sees exhibitors and breeders bickering with various levels of gravity.

Another worrying consequence of the pandemic has been a huge increase in the demand for puppies. Around the world, responsible breeders are reporting many inquiries for puppies from people who want a puppy NOW. Many of these have found that they have a lot of free time, and while they have for a long time considered owning a dog they have not because of the demands of their work and the time spent at home. While some people will continue to work from home for a lot of their time when the pandemic is over, many will not and they will have to resume their regular working hours. So, they will be leaving the house – and the puppy. How long will it be before this puppy becomes another rehoming statistic?

The breeders who are really responsible will deal with new puppy inquiries like they always have – they will ask many questions of the potential buyers and if they feel they may be suitable owners will put their names on a waiting list. Genuine buyers will be happy with this arrangement. However there are those who want a puppy to help them through the pandemic, giving little thought to the breed and the consequences and responsibilities of owning a dog for maybe 15 years. They want this distraction now, and when the quality breeders do not have puppies for sale like off a shelf in a shop, this kind of buyer will scan the free newspapers and internet and invariably end up buying from a commercial breeder – puppy farmer or call them what you like – and so acquire a puppy that may be unhealthy and problematical. Strangely it seems that these commercial breeders charge much more for their indiscriminately bred puppies than the genuine breeders who religiously health-test their breeding stock – and this also applies to those who are taking advantage of the demand for the new designer cross-breeds!

Unfortunately the coronavirus disaster has brought out both the best and the worst in some people. I believe that during isolation many of us will have learned a little more about ourselves, our strengths, our weaknesses and our capabilities. Hopefully next year will see a return to relative normality, but for sure things will never, ever, really be the same again.

© Dog News. This article may not be reposted, reprinted, rewritten, excerpted or otherwise duplicated in any medium without the express written permission of the publisher.
Wed, 08/12/2020 - 11:05pm