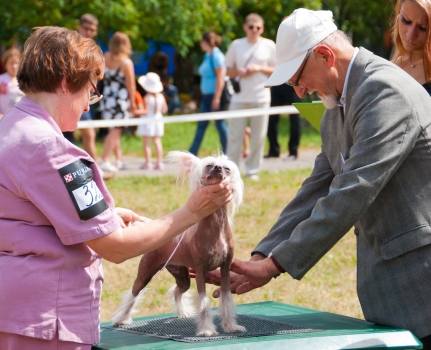 Why judges do what they do
By
Andrew Brace

How many times have you left a dog-show ring scratching your head and saying to yourself, “What on earth is he doing?”

I believe that the greatest compliment a judge can have from an exhibitor or ringsider is “I could follow his decisions.” Sometimes it isn’t easy for a judge to come up with results that are instantly understandable from an onlooker’s standpoint, especially in coated or trimmed breeds, as the judge has the advantage of having had his hands on the dogs competing. Furthermore, the dogs in the ring may not necessarily make it easy to “judge to type” when there is great variation, but this is the aim of most conscientious judges.

But let’s go back to the beginning. When judges start off, they will begin by judging their own breed and usually while actively exhibiting themselves. This means that they will be in the main faced with dogs that they know, of breeding they know, handled by people they know. They will be aware of the winning form of many dogs in the ring, so all this creates a kind of mental baggage that should be entirely irrelevant to their decisions.

The show ring was originally “the breeder’s shop window,” and the judge’s brief is to find the dogs that most closely fit the relevant breed standard, placing the competing dogs in order of merit. Novice judges will be steeped in their breed and fully understand all the breed characteristics and subtle nuances that contribute to creating “breed type.” They therefore have ample knowledge to make educated decisions as to what is best for THE BREED. Having bred and owned the breed, they should fully appreciate what is important and not be fooled by “showmanship” or flashy grooming and handling. They should also appreciate the wording on the award – BEST OF BREED – and not BEST BET FOR THE GROUP. All too often I have seen outstanding bitches lose Best of Breed to a slightly inferior male simply because the male may have more coat, or be asserting itself more, and the judge may feel that the male stands a better chance in the group than the outstanding bitch. Judges are not judging for the group; they are judging for THE BREED, and the male’s perceived advantages are often simply down to testosterone rather than genuine breed qualities.

Everyone has their own style and method of judging, and this should be decided upon before they start judging. Many years ago when I interviewed the legendary Anne Rogers Clark, she made the point that she tried first to select the dogs that meet her interpretation of classic breed type, then she sorted those selected dogs out on movement. Judging dogs on movement alone is a pointless exercise, as without breed type the soundest dog imaginable cannot accurately portray its breed. Mrs. Clark’s method coincided with my own thinking, and I always try, when possible, to follow that basic premise.

Breeder-judges have, by definition, been closely involved with a breed, and consequently may well have encountered problems when developing their breeding program. Maybe they have produced dogs with light eyes, poor feet or whatever, and their own experience may tend to color their judgment when it comes to prioritizing faults and virtues. I well remember watching a breeder friend of mine judging her breed a long time ago, and she seemed to be unduly hard on dogs that were a little strong in backskull (her breed requiring a clean and somewhat refined head), no matter how excellent they were in other respects. I asked her about this afterward, and the reply was simple: “I had that fault years ago and it proved a devil to get rid of.” Judges are human, and these past experiences make them the individuals they are, but it is important not to get hung up on one particular fault. We are there to reward virtues rather than penalize faults.

At my judging seminars I try to get across to student judges the need to train themselves to forget any factors other than the physical and mental qualities of the dog in front of them on the day. The dog’s winning record, its pedigree and its ownership are of no consequence. I also share with them a little trick I was taught when I was starting: When you see a dog that you really like, imagine it being shown by your worst enemy. Is it still that outstanding? More importantly, if you have a dog that you really don’t care for, imagine it being handled by your best friend in the breed. Is it still so awful, or have you noticed some redeeming features? It might sound silly, but you’d be surprised how it can rationalize the way we look at dogs.

The profile of the exhibitor has changed dramatically in my lifetime. Nowadays we see far fewer large-scale breeders who really do see dog shows as “the breeder’s shop window,” and more and more exhibitors who may own a small number of dogs and whose main priority is show-ring success. Human nature is such that no one likes to lose, but it alarms me when I hear unsuccessful exhibitors criticizing judges for being “crooked,” and the presence of social media has accentuated this fact, giving embittered exhibitors the opportunity to become uncensored keyboard warriors. I really don’t think we have many judges who are actually “crooks”; what we do have is a lot of judges who are lacking in self-confidence and don’t have the courage of their convictions.

For example, faced with two dogs – one owned by a totally unknown exhibitor so the judge has never seen either dog or handler before, and another who is regularly seen winning Best of Breed – even when the unknown is clearly superior to the “form” dog, some judges will favor the dog they know to be a big winner, just in case they get it wrong. This shows a lack of confidence. I remember many years ago the great Hans Lehtinen saying to me, “The difference between confidence and arrogance is as thin as a piece of cotton,” and Hasse never lacked the confidence to put up the dog he thought was best, whether he knew it or not. It is essential that judges go with their gut instinct and follow their heart.

This can be difficult sometimes when a breed entry consists of dogs where most are of a certain type and one appears to be rather different. Most judges would assume that the majority must be right and the “odd man out” wrong, but that is not necessarily the case. For example, when I was showing my Beagles, most (but not all) of my hounds were blanketed tricolors. It is my favorite color and my top winners were all blanket tris, but I never let that influence my judging of a breed where any recognized hound color is acceptable. I was invited to judge the Adelaide Royal in Australia many years ago and had a large entry of Beagles, almost all of which were blanketed tricolors. Word had obviously gone around that this was my “favored” color. In the entry were only a handful of bicolor dogs, one of which was a young tan-and-white male who immediately impressed me for his overall balance, beautiful head and expression, and scopy movement. He ended up winning Best of Breed, much to the amazement of many of the exhibitors. After judging I was very keen to find out who this dog was, and was pleasantly surprised to discover that he was in fact the son of a dog I exported to Australia several years previously that was a blanketed tricolor! It then was easy to understand why his type had appealed to me so much, regardless of the color.

Oftentimes decisions can be close, and this is often when personal preferences can influence a judge. Many breeds have slightly different styles that all fall within the breed standard and can all be representative of breed type, but it is quite logical that judges will be drawn to the “look” of the dogs they breed and show. This is perfectly understandable and does not make them dishonest. While we all expect our winners to be basically sound, the standard of movement can vary from dog to dog. When you are faced with two dogs that are virtually equal in their physical virtues, movement can very easily be a deciding factor, and I myself have often decided Best of Breed – when the dog and bitch are equally pleasing – on which is the more exceptional mover. Sometimes it can be down to one moving slightly close behind whereas the other goes away true and parallel, for example.

Many judges are perfectly happy to judge only their own breed, whereas others choose to expand their portfolio and branch out into other related breeds and then maybe even further. It is a long and gradual process before anyone becomes an “all-rounder.” I should point out that, although many people may consider me to be an all-rounder, I believe that the finest judge is the true breed specialist who is worthy of the name (and there is a world of difference between a breeder-judge and a breed specialist), someone who has bred their breed for generations, establishing an identifiable line, and is capable of judging the breed without fear or favor, rewarding dogs purely on their physical and mental attributes regardless of breeding, winning or ownership.

When branching out to other breeds, it is the judge’s duty to study and research any new breeds as much as possible, acquainting themselves with the breed characteristics and being sure in their own mind what are the “must have” points. However, I see far too many judges going into other breeds determined to imitate the specialist, and this they can never do. They should be conscious of wearing their “all-rounder” hat, but applying breed-specific knowledge. There is room for both categories of judge, breed specialist and all-rounder, and I believe all breeds benefit from a combination of both.

One of the dangers with all-rounders, especially as they acquire more and more breeds, is that they are sometimes attracted to generic show dogs and forget the breed detail. Yes, we all love to get dogs in our ring that are beautifully groomed and showing well, but most important of all is their integrity of breed type. That has to be the priority.

Judges will never please all the people all of the time, but they can please themselves. They need to go home and sleep at night, knowing that they did their best. Exhibitors should perhaps accept that most of them have done just that.

© Dog News. This article may not be reposted, reprinted, rewritten, excerpted or otherwise duplicated in any medium without the express written permission of the publisher.
Tue, 03/23/2021 - 9:26pm