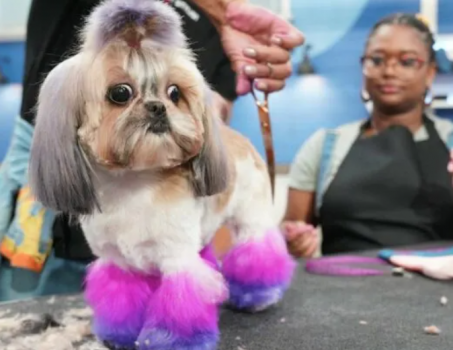 Are you tuning in to ABC's new grooming show, "Pooch Perfect"?
By
Eugene Z. Zaphiris

Dear Lord, the animal-rights people have won, and we might as well give up. This show panders to the "fur babies" population – where are the TV shows about how much time good breeders spend with their dogs, how much they worry about their health, etc.? AKC could perhaps spend more time on something such as that – yeah, maybe in the next life!

I have enjoyed the show. It’s cute, and the dogs are adorable. I was sad to hear the negative comments about it coming from within the sport. It has nothing to do with the sport of purebred dogs.

It is a celebration of dogs and relationships with dogs. It is a positive for dogs and those who love them. Sadly, it brings out our worst traits as the elitists in the dog world work to tear it down. That is one of the reason our very own sport is in danger continually. We can't allow ourselves to not be snobbish. I say get over it and enjoy the show. We should be excited that they have decided to produce something where the stars of the show are canines!

I love the show! I think it’s fun family entertainment. The dogs all look very happy, and none of them seems to mind the process. It’s just silly, fun entertainment.

I have a Ridgeback, they can't teach me anything about grooming "pooches."

If you're a part of the grooming industry, you will recognize many names. Jorge Bendersky was also a competitor on the previous show "Groomer Has It." Competitive grooming contests occur across the United States, and I’m glad to see that they’ve made their way to TV. Creative grooming is just fun to see what people dream up!

I saw it last week, was horrified and felt SO sorry for those poor dogs being subjected to the gratification of kids! I can just see people trying this at home, too … I hope they take it off the air. I don’t feel that these kids need this kind of validation for their professions.

Have no interest in watching this TV show. My dogs are not my "kids," "children," "fur babies” or, most of all, not dolls to dress up and dye. I love my dogs for all they are, the way they look, and all they bring into my life. Definitely not a substitute for anything that I feel is missing in my life. My dogs have given me more than I could ever give back to them, nothing to improve upon or change. It would be far more productive to have a show educating the public on all the wonders of dogs and their natural talents.  We need to understand them as opposed to turning them into objects to satisfy one's alleged artistic talents. If you're that talented, do a painting of them instead.

I'm not a fan of competition/elimination shows, but I have been watching it. Probably because I AM a fan of [show host] Rebel Wilson. I do like the fact that it has highlighted dog-show competition a little and not shoved the animal-rights agenda down our throats.

I wanted to see this firsthand: Would it be valuable to the trade, and how would the animals take to the stress of it all? It does not appear to be about grooming – the talent is more into colorizing, sculpting and interpretation. It does not seem to have anything to do with proper grooming techniques based on breed type or standard.

It’s fluff.  I feel for the animals – wonder where PETA is on this …?

I think it’s disgusting! They should take it off the air! I couldn’t even watch it and had to change the channel.

I don't expect you to use my thought, which is "Ewwwwwww!" Poor dogs.

Possibly I’m a party pooper, but I view my dogs with high esteem. Therefore, painting them various colors and making them look like they aren’t Norfolk isn’t my thing. It’s one thing to ask a human to “change” their look via various colors, but the human can make that decision; the dog can’t. I would never be demeaning to any of my Norfolk. I wonder what PETA thinks of the show?

When I saw the advertisement for this show, I said, "No way, I won't be watching that.” Well, I was wrong ... I have had Briards for more than 40 years, so I am heavy into grooming. Not the extreme grooming they do on this show, but, still, I know my way around a brush.

I tuned into the first episode by accident after it was on for a half-hour, and kept it on. I find it very entertaining and look forward to watching it each week. And, YES ... I did go to Hulu to watch the entire first episode I missed to see it from the beginning. Cute show!

Let’s see, how do I say this politely? I would have to be paid a lot of money – and I mean a LOT of money – before I would even consider watching it. Besides not being able to stomach Rebel Wilson, I think the whole concept of the show is ridiculous.

I am watching and enjoying “Pooch Perfect.” BUT it is a reality TV show and highly produced and manipulated, not a competition. If one person gets a Standard Poodle and another a Cocker and another a Maltese, that's not a fair playing field in terms of time, coat or shape. The end results of the grooming are fun to see.

As a show person, groomer and breeder, this show appalls me. Just another Hollywood attempt at their “woke” behavior. I am surprised PETA hasn’t yelled about it.
The only item of “clothing” a well-groomed dog should ever have on it is a collar, leash or lead.

© Dog News. This article may not be reposted, reprinted, rewritten, excerpted or otherwise duplicated in any medium without the express written permission of the publisher.
Sun, 05/02/2021 - 12:42pm