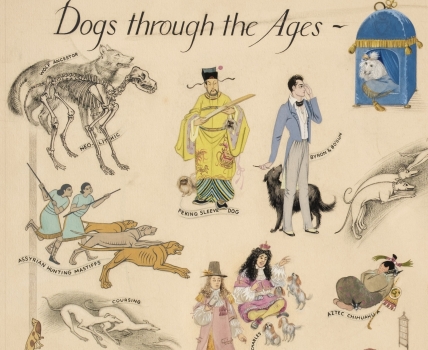 Dogs Through the Ages

The saying that every picture tells a story is certainly true with this picture. Circa 1960, this graphite and gouache picture on artist’s board measuring 11½ inches by 18¼ inches was sold by Dominic Winter in their “Children’s Books, Literary Autographs and 19th and 20th Century First Editions” sale earlier this year. Expected to sell for between £200-300, the dogs found a new home at £760.

Its creator was Pauline Diana Baynes (1922-2008), illustrator, author and commercial artist who contributed to more than 200 books, mostly in the children’s genre. One cannot help being impressed by the research put in by the artist to create it.

Having spent the first few happy years of her life in India, back home in England Pauline’s early years of education were anything but happy ones, spent at a convent where the nuns mocked and bullied her over her ability to speak Hindi and her fantastical imagination. It was her talent for imaginative, lively designs that would become the hallmark of her work in later life.

“Dogs Through the Ages” charts the evolution over the centuries, with help along the way from a few famous owners. We travel to ancient Egypt and meet a Pharaoh walking with her hounds and to Assyria where hunters with spears hunt with their Mastiffs. The journey ends with the pampered pets of the 18th and 19th centuries; a Chinese mandarin with his sleeve Pekingese, a rather rotund Aztec who appears to be sitting on his Chihuahua, and a Poodle in a gilt braid and tasselled decorated indoor kennel.

Baynes’ image from the Roman period replicates one of the universally best known of all early images. “Cave Canem” – Beware of the Dog – was discovered at the entrance to the “House of the Tragic Poet” in Pompeii. As well as the obvious, some scholars have supposed that these warnings may sometimes have been intended to prevent visitors from stepping upon small, delicate dogs of Italian Greyhound type. 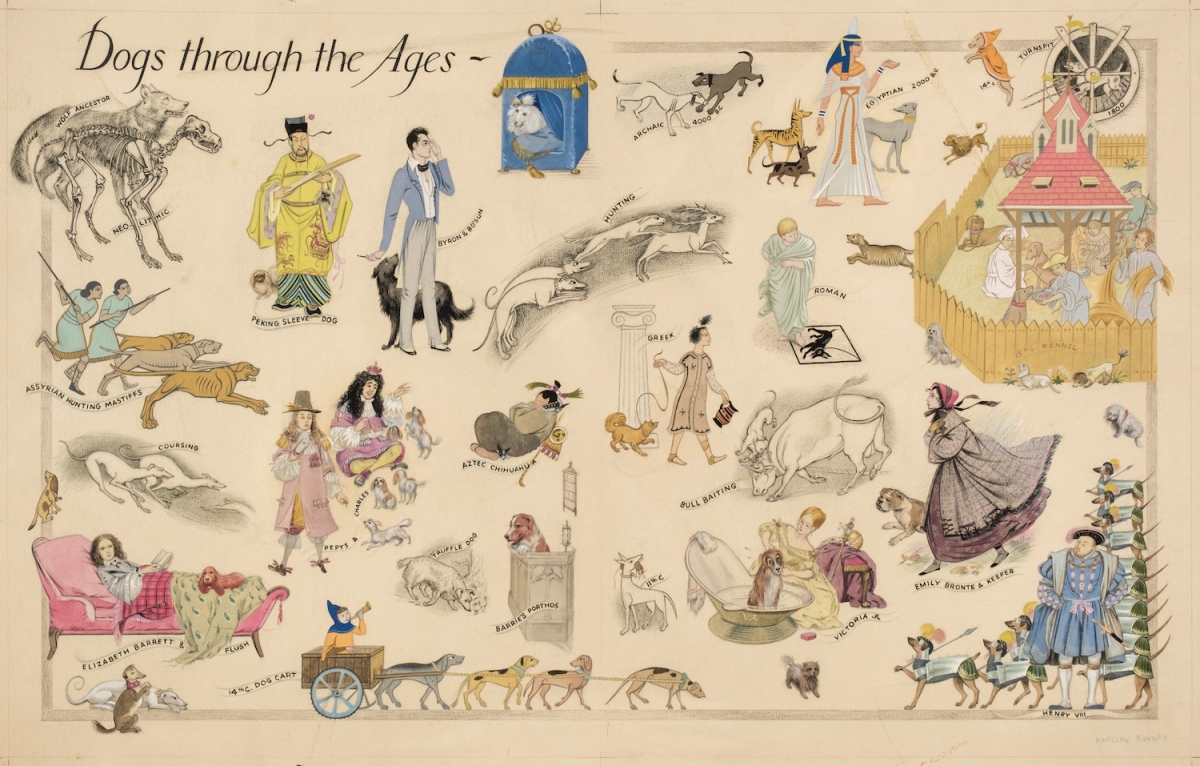 By the time we arrive at the Early Modern Period, stag hunting, hare coursing and baiting were etched into the fabric of rural life in Britain; coursing and hunting, conducted with military precision, were the prerogative of the landed and titled families.

“Laws of the Leash” for coursing were drawn up in the reign of Elizabeth I reputedly by the 4th Duke of Norfolk and have remained virtually unchanged ever since. They provide for the pursuit by no more than two hounds, a head start termed “Law” to be given to the hare. The red deer had been hunted in Britain since Norman times with great areas being declared Royal Forests, gradually though it became superseded by the much more popular fox hunting that could be practiced virtually all over the country.

Baiting could be and was “enjoyed” by all classes. A great variety of animals were baited, the most popular being the bull as there was no shortage of supply. Many towns and villages had their bull rings, where a ring was driven into the ground to which was chained the bull. A few of these rings still remain in situ in rural villages. Baiting animals was one of the first sports to be outlawed in Britain.

Dogs have had a role in warfare from earliest times, in more recent wars for detecting and as messengers, but in Europe in the 16th, 17th and 18th centuries monarchs brought their dogs to the battlefield. Most famous of these monarchs was Henry VIII of England, who kept vast numbers. In 1525 he shipped 400 Mastiffs out to Spain to support the king in his wars against the French.

In contrast to Henry with his Mastiff in body armor, Baynes gives us King Charles II sitting cross-legged enjoying the company of four of his red and white Toy Spaniels. He is credited with making these small spaniels popular with monarchs all over Europe, his own dogs being allowed to roam Whitehall Palace, including during state visits.

Three great literary giants feature with their dogs: Lord Byron, Emily Brontë (she who wrote “Wuthering Heights,” which was made into a 1939 film starring Laurence Olivier and Merle Oberon) and Elizabeth Barrett Browning.

The most famous is Byron and his Newfoundland “Boatswain,” whom he acquired when he was just fifteen. Born in 1803, allegedly bred in Newfoundland, the dog became his constant companion but died at just five years old from rabies. There is a monument to the dog erected outside Byron’s home, Newstead Abbey, on which is inscribed in marble perhaps one of the most loving epitaphs ever written by a man about a dog. “Near this spot are the remains of one who possessed beauty without vanity, strength without insolence, courage without ferocity ….”

Brontë’s Mastiff “Keeper” was a regular muse for Emily’s art. He also accompanied her on her daily walks on the moors and lay next to her while she wrote and read. Elizabeth Barrett Browning’s Spaniel “Flush” was a gift from fellow author Mary Russell Mitford to help relieve the grief Elizabeth felt at the death of her beloved brother in 1810. Deserving of one of her poems, “To Flush my Dog,” Browning wrote: “…. Like a lady’s ringlets brown, flow thy silken ears down …. .”

Baynes does not forget the working dogs. Draught dogs were used throughout Europe for centuries, delivering milk in Switzerland, taking produce to market, for general deliveries and in World War I in the shafts of field ambulances.

The Turnspit was a long-bodied, short-legged dog first mentioned in 1576 bred to run on a wheel called a turnspit or dog wheel to turn meat over an open fire. They were usually employed by cooks in large kitchens, and the work was both exhausting and hot for the dogs.

Truffle dogs had a far more pleasurable existence, being trained to sniff out and dig for the much prized truffle fungi. There has been a revival in their use, and truffles are now hunted in parts of Southern England.

© Dog News. This article may not be reposted, reprinted, rewritten, excerpted or otherwise duplicated in any medium without the express written permission of the publisher.
Fri, 03/19/2021 - 7:38pm