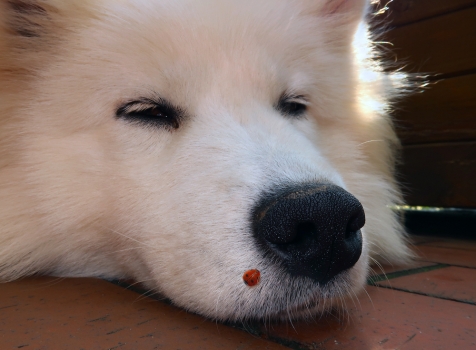 Here's the buzz on insect-based dog food, plus a new way to induce vomiting with eye drops
By
Merry Fitzgerald, DVM

Is there is dog food made from bugs?

Yes, as strange as it sounds, there are several dog foods on the market that are made with insect protein. These dog foods offer an alternative to meat- and fish-based diets, and are popular with vegan and vegetarian consumers.

The idea is that by using insects as the protein source, the environmental carbon footprint could shrink significantly. Insect farming requires less land and water than livestock production and results in lower greenhouse-gas emissions.

Purina has announced the launch of its Beyond Nature’s Protein in Switzerland this month. Yora is a UK-based company producing insect-protein dog foods. At this time, United States regulators have not permitted the use of insect-based ingredients in dog foods. However, some treats containing insects are on the market, as treats are not as strictly regulated.

Manufacturers claim their products taste great, are highly digestible and contain as much protein as traditional sources such as poultry meal and fish meal. Recent studies found the digestibility and amino acid profiles to be high.

What are the pros and cons of using insects in dog foods?

Black soldier fly larvae and mealworms are the most popular insect-based feedstocks for animal food. They are easy to produce and can be raised on low-cost agricultural byproducts such as potato pulp and wheat starch. Many insects, including crickets, locusts and even cockroaches, have a protein level close to that of chicken and fish.

Another benefit of bug-based proteins is they provide an alternative protein source for dogs that are allergic to the more traditional proteins, such as beef, chicken and fish.  Insects are also rich in fats, and their feces, which are known as frass, make good fertilizer.

The fat of the black soldier fly larvae is rich in lauric acid. This is a saturated fatty acid found in plant and animal fats and oils, including coconut oil and palm kernel oil. Lauric acid is also believed to have antimicrobial (germ-fighting) properties and support the health of the immune system.

One of the drawbacks to an insect-protein diet is that since they do not have bones, the insects’ calcium level can vary. Depending on how they are fed, the calcium level may be very high or very low. Traditional protein sources such as poultry and meat meals contain more calcium than dogs need. A solution would be to mix low-calcium insect meal with other protein sources containing high calcium to optimize the levels in the dog food.

Contamination is also a risk factor. Insects can carry a variety of diseases, and absorb metal and chemical pollution, including pesticides. Insect flour meal is heat-processed so it is sanitized in the process, but there could be an accumulation of heavy metals, such as cadmium and lead.

Insect-based dog food is not complete and balanced by itself. Other ingredients need to be added to the formulation. These include oats, potato, beet root, corn, peas, yeast, vitamins, minerals and glucosamine.

When will insect-protein diets for dogs be available in the United States?

In order to earn approval and sell insect meal in the United States, dog-food manufacturers must do one of two things: They can either formulate their diets to meet “minimum acceptable” nutrient levels for dogs at several life stages, or they can run feeding trials to demonstrate that their diets meet the nutritional needs of dogs.

Feeding trials can be prohibitively expensive for small companies. These trials are often impractical and difficult to interpret due to the variability in home care and the changing nutritional needs of different dog breeds. It can take a couple of years in order to determine that a diet with a new protein source is safe to feed.

Yora, one of the first companies to manufacture dog food made with black soldier fly larvae, does extensive product testing. They feed their larvae fruit and vegetable byproducts exclusively to minimize disease risks.

An interesting side note: Yora takes fresh whole larvae and gently dries them to create protein-rich flour. They also take the extra step to slowly chill the larvae so they are in hibernation and unconscious, in order to rule out suffering, before they are manufactured into food.

Is there a new product that will induce vomiting in dogs?

Yes, the Food and Drug Administration has recently approved Clevor (ropinirole ophthalmic solution), which is an eye drop used to induce vomiting in dogs. The drug is a dopamine agonist, which mimics the action of dopamine in the body. Dopamine is an important neurotransmitter that facilitates many of the body’s physical and mental functions.

The indications for inducing vomiting, also called emesis, are when the dog has ingested a poison or eaten an object that will not be able to pass through the intestinal tract. Hydrogen peroxide given orally will make dogs throw up, but can be irritating to the stomach and throat in the process. One trick to avoid this irritation is to soak pieces of white bread in the peroxide and feed them to the dog. The bread will pad around the foreign object, absorb some of the toxic substance, and protect the stomach and throat as the dog empties the contents of his stomach.

Apomorphine has long been considered the drug of choice by many veterinarians for inducing vomiting in dogs. This drug has a similar action to Clevor. It stimulates dopamine receptors in the chemoreceptor trigger zone, which makes the dog vomit. Apomorphine works so well, it is sometimes hard to stop the vomiting once it is started.

Apomorphine can be injected intravenously and acts quickly. It comes in a tablet form as well. When the tablets are given orally, the results are unpredictable. A piece of a tablet can be placed in the lower eyelid. The drug is absorbed through the conjunctiva and stimulates vomiting. This is the most common method of administration, but the eye must be flushed extensively to avoid irritation. Another drawback to apomorphine for veterinarians is that it is a controlled substance, so must be kept in a lock box and logged when used.

Clevor comes in prefilled, single-dose droppers. The number of eye drops administered is based on the dog’s weight. Small dogs get one drop in either eye, while large to giant breeds get two drops in both eyes initially and one more drop in each eye after two minutes. Studies report the majority of dogs vomit after the first dose, while a smaller number of dogs needed a second dose 20 minutes later.

The most reported side effects associated with Clevor eye drops were consistent with those seen with other drugs in the dopamine-agonist class. Tremors, lethargy, increased heart rate, decreased blood pressure and prolonged vomiting are sometimes seen. These drug-related symptoms resolved within six hours of dosing. Redness of the eyes and third eyelid prominence have also been noted.

I am excited to try this new drug. Being able to quickly, safely and effectively induce vomiting can mean the difference between a mild upset stomach and an emergency abdominal surgery. Last week I saw a Doberman that had swallowed a bath loofa. It came up with administration of peroxide, but it was messy. A simple eye drop would have been a pleasure.

© Dog News. This article may not be reposted, reprinted, rewritten, excerpted or otherwise duplicated in any medium without the express written permission of the publisher.
Sun, 11/15/2020 - 12:28pm