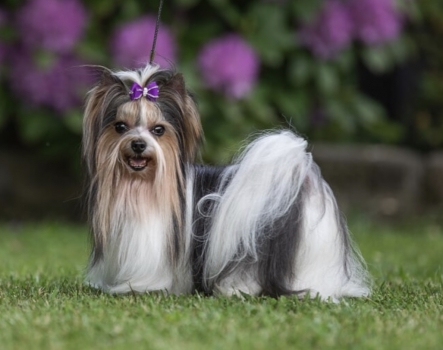 Busy as a Biewer 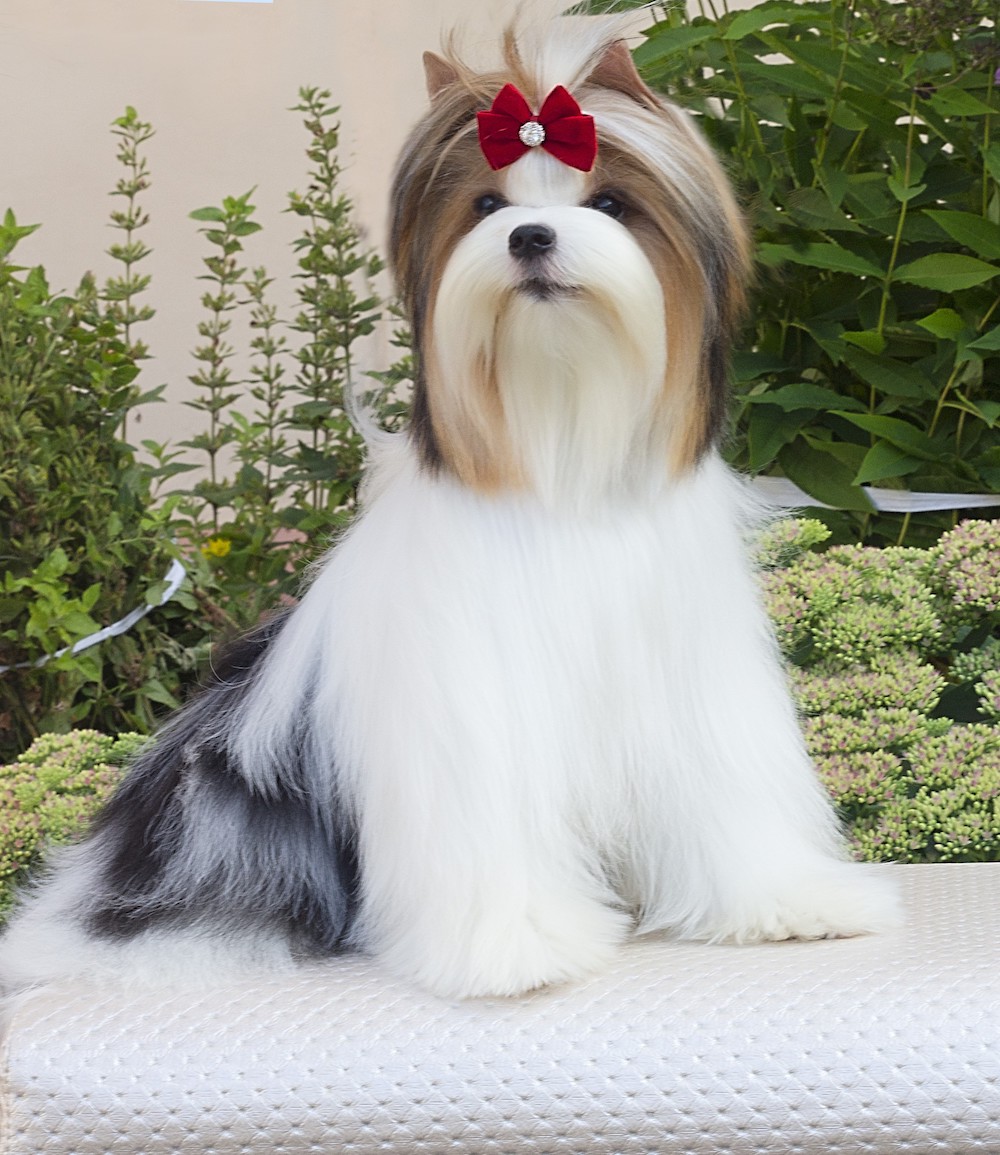 Biewer Terriers (pronounced “beaver,” like the little dam-building animals) have come a long way since 2003, when they were first imported into the United States. Today, almost 20 years later, our beautifully colored breed is looking forward to official American Kennel Club recognition and admission into the Toy Group on January 1, 2021.

The breed takes its name from the late Werner and Gertrud Biewer, Yorkshire Terrier breeders from Hunsrück, Germany, who in the 1980s began producing tricolor Yorkies. Initially they referred to these striking dogs as the Black and White Yorkshire Terrier, and later as the Biewer Yorkshire á la Pom Pon. (The pompom reference is attributed to the famous singer Margot Eskens, who thought they looked like a ball of yarn.) The German kennel club refused to register the Biewers’ dogs, but this did not deter them. In time, they found a registry that would accept the dogs.

The breed that took their name is an elegant, long-haired, uniquely colored Toy terrier with a breed signature ponytail neatly tied on top of its head. The coat parts down the middle, hanging straight and evenly on both sides of the body as though a comb has been used to part it. The back is level, with the height at the shoulders equal to the height at the croup. 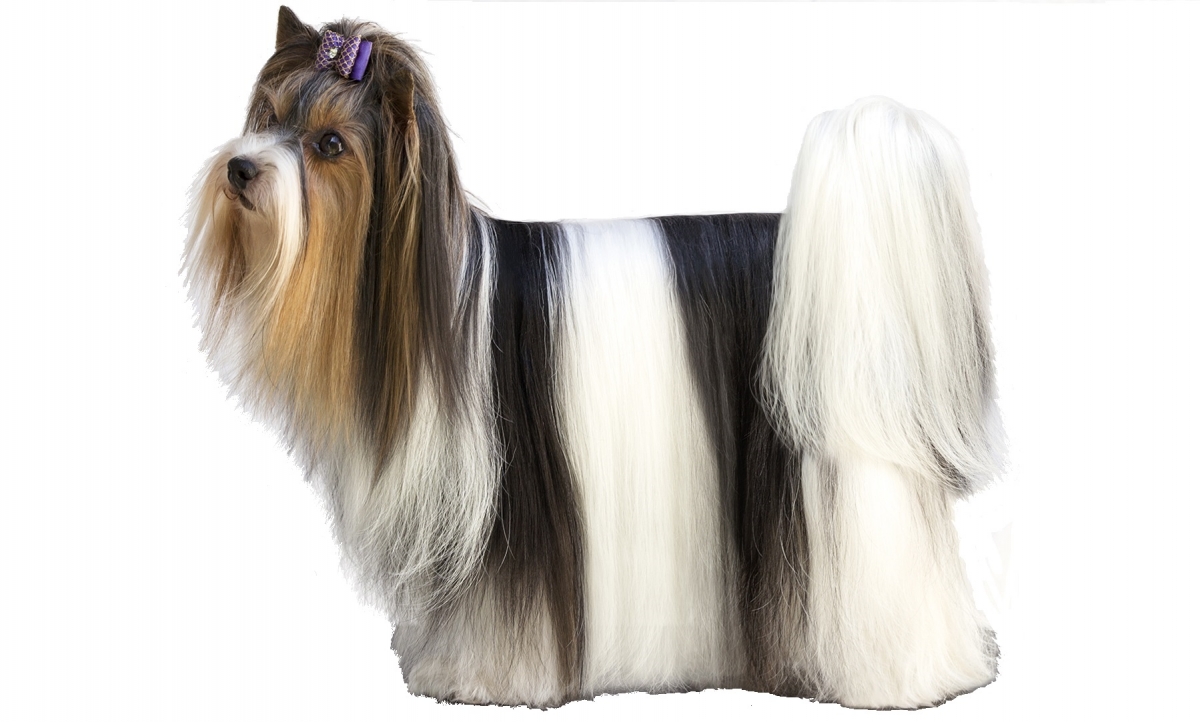 In the breed’s early years, some people referred to the Biewer Terrier as a mutt or a designer dog, a passing fad that the dog world would never accept. It was dismissed as simply a parti Yorkie – that is, a Yorkshire Terrier with a recessive piebald gene.

This all changed in 2007, when the DNA from 10 Biewer Terriers was submitted to geneticists at Mars Veterinary. Their in-depth genetic study showed that the samples all clustered together, determining that the Biewer Terrier it is a bona-fide breed resulting from the long-ago combination of at least three distinct breeds – the dominant ones being Yorkshire Terrier, Maltese and the Havanese/Bichon family – although there are no records or documentation of what specific breeds were used.

Genetic evidence aside, there are several differences between the Biewer Terrier and a parti-color Yorkshire Terrier.

The parti Yorkie is basically a white dog with a gold head. It has very little, if any, black on its back. The hair is finer and thinner than that of a Biewer. If the tails on parti Yorkies remain uncropped (which they generally are), they stand straight up, with no curve.

The Biewer, on the other hand, has a head that is black, gold and white, and a black and white body. The Biewer Terrier has no set pattern or amount of black on its back. Some have a solid-black back with a white band across the shoulders or a spotting of black, often giving the appearance of black and white striping. Although the outline of the Biewer Terrier may appear to be square, the body length is actually slightly longer than tall. Biewers have a high-set and well-arched tail curving over the back, covered with a long, luxurious plume. By contrast, parti Yorkies are square with a straight tail. There were very few people breeding parti-color Yorkshire Terriers when Biewers were first imported to the U.S. two decades ago. These days, if you find a parti-color Yorkshire Terrier that looks like a Biewer Terrier, it likely resulted from the cross-breeding of the Biewer and the parti Yorkie that some parti Yorkie breeders practiced in the early days.

The differences between standard Yorkies and Biewers are basically the same as with the partis, except for the hair. Biewer Terriers tend to be thicker boned and more muscular than Yorkies. Aside from the distinct coloring, Yorkies have that cool-to-the-touch, pure silk hair. The Biewers have a coat that is in between cotton and silk. We refer to it as a soft silk. 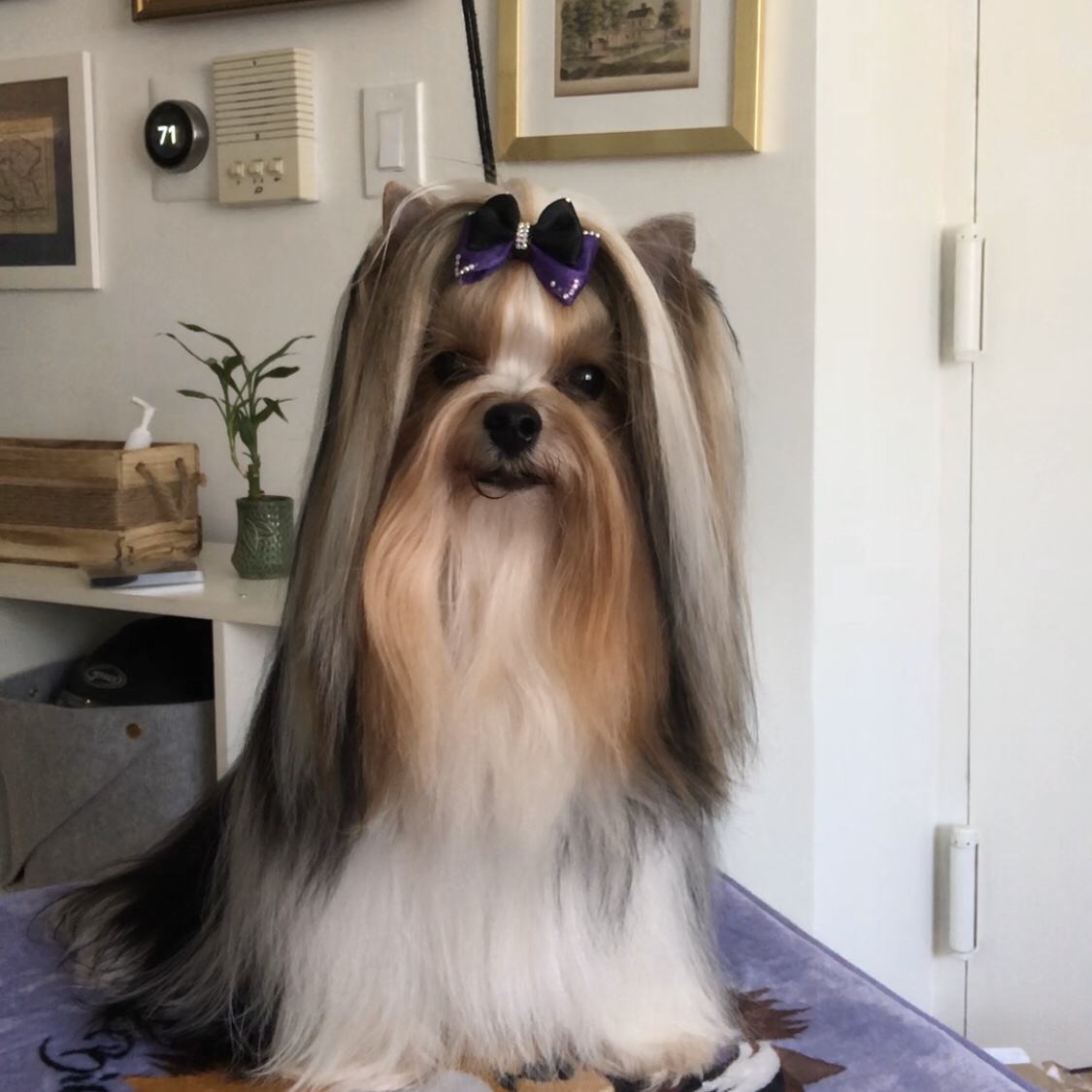 Judging our breed requires a few extra steps because of the color-related faults and disqualifications in the standard. While the dog is on the table, judges should lift the body hair to make sure that the hair is white from the feet up to the elbows and stifles. Brown hair on the body and brown or liver pigmentation are DQs in the standard; therefore, judges may want to inspect the feet to make sure the pads are not brown.

On completion of the exam, the handler can pick up the dog and raise it so the judge can see the bottom of the feet and the belly. If the pigmentation around the eyes and the nose is black, the pads are also going to be black. It is up to judges whether they want to check the pads at this point.

We are adamant that topknots, which are commonly used in other breeds such as the Yorkshire Terrier and the Shih Tzu, should NOT be used on the Biewer Terrier. A ponytail on top of the head adorned with a bow or other type of clip-on is all that is required.

The Biewer Terrier has a lighthearted, whimsical, almost childlike attitude that keep its humans entertained for hours. Although mischievous at times, Biewers are obedient and make loyal companions who love to carry toys around all the time. Gertrud Biewer joined the Biewer Terrier Club of America in 2007, as she believed strongly in the club’s core values and the direction in which we wanted to take the breed. With the information and records of the breed’s early years from the Biewers’ Friedheck kennel, we had a wealth of information on how the breed originated and progressed. 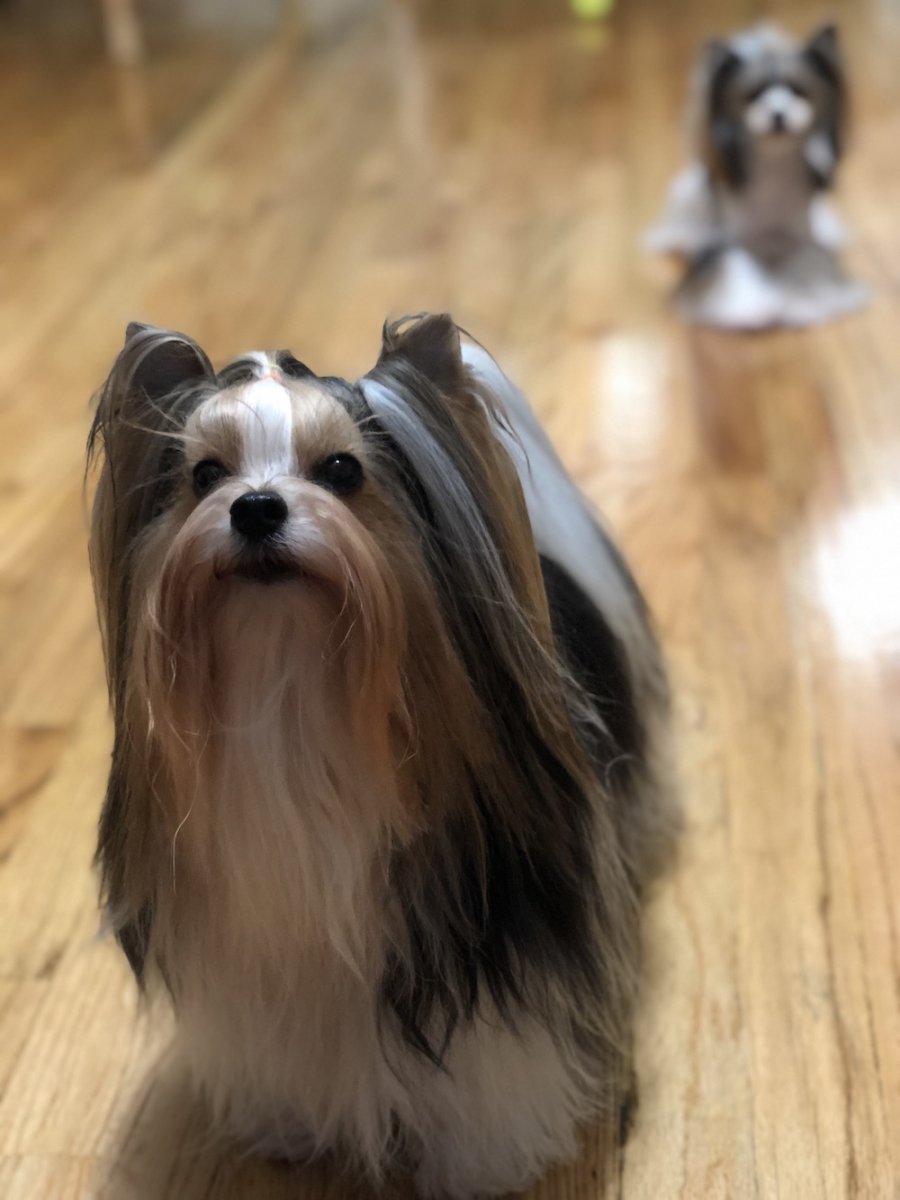 The Biewer Terrier Club of America always wanted to obtain full AKC recognition for the breed, a goal that was accomplished in record time. Since the acceptance of the Biewer Terrier into the AKC’s Foundation Stock Service in April 2014 (five years after our first application in 2006), we worked closely with AKC to meet the requirements necessary to advance. The Biewer Terrier is the first breed in the history of dog domestication to be recognized as a purebred due to an in-depth genetic study conducted on the breed.

Five years later, in July 2019, the Biewer Terrier moved into the Miscellaneous Group. On January 1, 2021, after only 18 months in Miscellaneous, the Biewer Terrier will move to full AKC recognition. We are the only breed to advance into full AKC acceptance in an unprecedented period of six and a half years, without being recognized in the country of origin or by the FCI.

Elsewhere in the world, the Biewer Terrier’s popularity has grown rapidly as well. South Africa, Brazil, Bolivia, the Bahamas and Lithuania were among the first countries to recognize the Biewer Terrier. At this time the BTCA continues to assist foreign Biewer Terrier breeders and fanciers in meeting the requirements for recognition in their respective countries.

The BTCA recognizes that there are many dogs being registered with non-AKC-accepted registries that may be purebred Biewer Terriers. For this reason, we have made provisions for these dogs to be registered through the Biewer Terrier Registry of America (BTRA), which is the only domestic registry accepted by AKC. It is imperative that anyone seeking AKC registration from a non-accepted registry register their dogs with BTRA before January 2023, when AKC will close the stud book on BTRA.

The dedication and devotion of our members in adhering to the strict, ethical guidelines it takes to develop a new breed are to be commended. It has not been an easy road, but the rewards have been monumental. By belonging to the parent club, they have taken their responsibility to preserve and protect the breed very seriously. 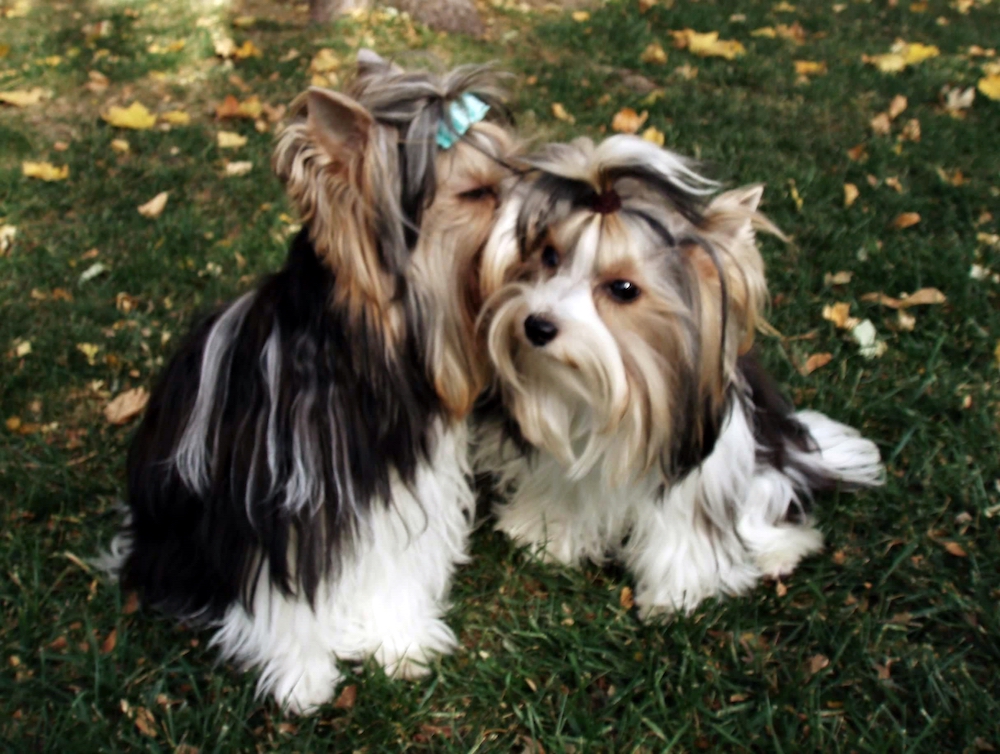 Myrna Torres is the president and co-founder of the Biewer Terrier Club of America. A Biewer breeder since 2006, she submitted the first Biewers to be tested in the genetic studies that helped to establish the Biewer as a breed of its own.

Gayle Pruett is the vice president and co-founder of the Biewer Terrier Club of America. She is one of the original importers to America of the breed in 2004. In 2007 and 2009 she personally met with Mrs. Biewer and received documentation and pictures of the original Friedheck breeding program.

© Dog News. This article may not be reposted, reprinted, rewritten, excerpted or otherwise duplicated in any medium without the express written permission of the publisher.
Fri, 10/09/2020 - 10:33am