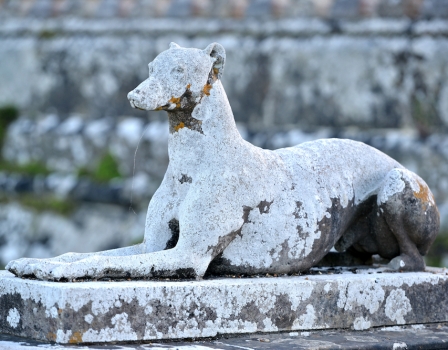 Were the Greats Really That Great?

These four Sighthounds stand the test of time
By
Bo Bengtson

You have also heard the opposite: The legendary old names wouldn't be able to win a ribbon today. Times have changed, and so have the dogs; those old names would just be a joke if they could enter a show ring today. No way would they cut it in today's competition.

So who's right? I have always maintained that although so much has changed in many areas that someone from the past would have a hard time feeling at home today, people are basically the same and the dogs aren't that different either. But I have to admit that sometimes, looking at old photographs of dogs that you remember as being wonderful THEN, you have to wonder just what you were thinking … It's never easy to look at infatuations from one's youth, human or canine, with the clear eyes of maturity, and surely it can't all be a matter of better (or at least different) styles of grooming, stacking, camera technique and retouching?

Of course, it also depends on what you mean by "the past." A hundred years ago or 20? That, in turn, may depend on your age. As I get increasingly gray around the gills it seems to me that the "good old days" were at their best maybe in the 1960s and '70s, but to someone of more recent vintage those years are so distant as to be positively antediluvian … I have even heard some young people refer to the '90s as "history," and of course they are right: Technically, at least, even yesterday is history, so it's all a matter of perspective.

For now, let's look at a few dogs that I think have stood the test of time. Some of them I knew, saw, even judged … and some were long before even my time. I'll at least initially focus on breeds I can claim to have some knowledge about.

Do you remember Punky, the Greyhound that Corky Vroom showed to No. 1 of all breeds in 1976? She was born more than 45 years ago, so I guess there can't be many people left who recall her, but I do. Her registered name was Ch. Aroi Talk of the Blues, she took two Hound Group firsts at the Garden and won the GCA specialty in Santa Barbara from the classes under Annie Clark as a youngster. By today's standard she probably wasn't a particularly extrovert showdog, but for her time that's one of the things that made her stand out, especially for a Greyhound. She came back to the judge, cocked her ears and asked what you wanted her to do next … Her lasting qualities is what made her great in my eyes, however. They must be obvious in any of the win photographs that have been preserved: her length of neck, her wonderful legs and feet, the smoothness and amplitude of her proportions, the general snakiness of her appearance … 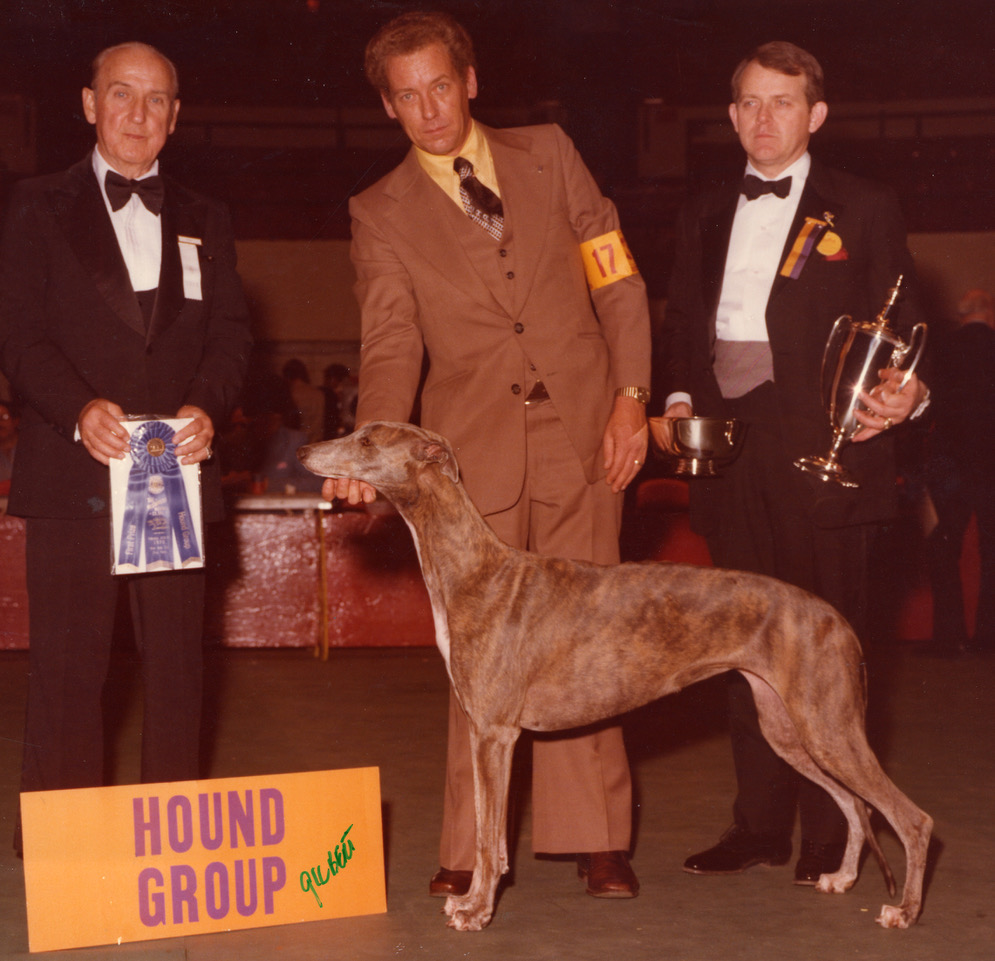 The photograph is from Punky's first Group at Westminster, with Corky handling under judge Dr. W. Shute. (Incidentally, I didn't know until recently that Punky was the result of half brother/sister breeding, with Eng. Am. Ch. Seagift Parcancady Royaltan in three of the four great-grandfather positions, and the fourth spot occupied by Royaltan's half brother. Would this kind of inbreeding be acceptable today?) 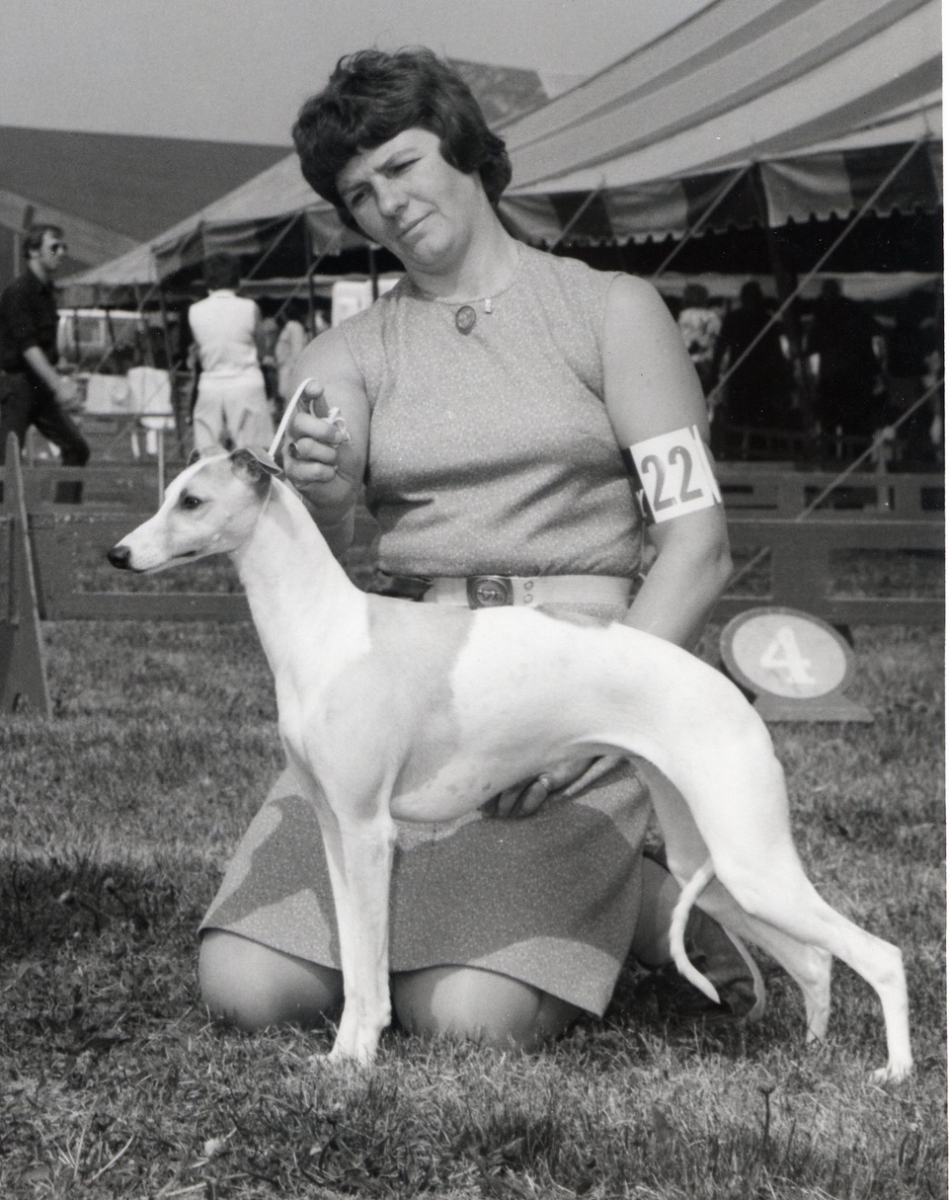 Then look at the Whippet photo of Ch. Highlight's Legacy. She was a multiple BIS winner in the mid-to-late 1970s also, but she was shown on the East Coast, so I didn't see her. (And yes, that's Joy Brewster showing her — then a professional handler, now an AKC judge.) When I posted her photo on a Facebook page recently there were soon more than 2,000 People Reached, 1,322 Engagements and 21 Comments, which I'm told is pretty good for this sort of thing. Karen Lee says she was so infatuated by Legacy when she saw her as an ancient dog that she asked if there was maybe a son she could breed to — only to be told that because there wasn't a good enough male around, Legacy had never been bred!

Legacy was sired by the influential English stud dog Ch. Greenbrae Barn Dance, who according to many was responsible for giving American Whippets the glamour and refinement they were long known for. In fact, Legacy was inbred to Barney: her dam was sired by his son, but at the bottom of her pedigree there was "solid American breeding" from Stoney Meadows. What a pity that her line was not continued.

Let's then go back a couple of decades, to the Afghan Hound Ch. Shirkhan of Grandeur. He took one of the most sensational BIS wins ever at Westminster in 1957, when he was still a young dog and not yet famous — and Grandeur was as yet not the byword it became later for typy, refined Best in Show-winners. (On the other hand, Shirkhan was not nearly as rarely shown as sometimes claimed: records indicate that he won almost 100 Hound Groups and more mote than 2O BIS during a career that lasted well into the '60s.) He's one of those dogs who varies a lot in photographs, depending on when and where they were taken; I don't know when the accompanying picture was shot, but Shirkhan was obviously a young dog, and although his owner, breeder and handler, Sunny Shay, lived in New York, the photo was taken by Joan Ludwig in California. It's a wonderful picture. I wish we had more Afghan Hounds like this today: the proud head carriage, the long, punishing muzzle with a slight rise over the nasal cavity, the ringed tail up, the big feet, and above all the arrogance that's so evident in this photograph — Shirkhan really "owns the ground he stands on" … 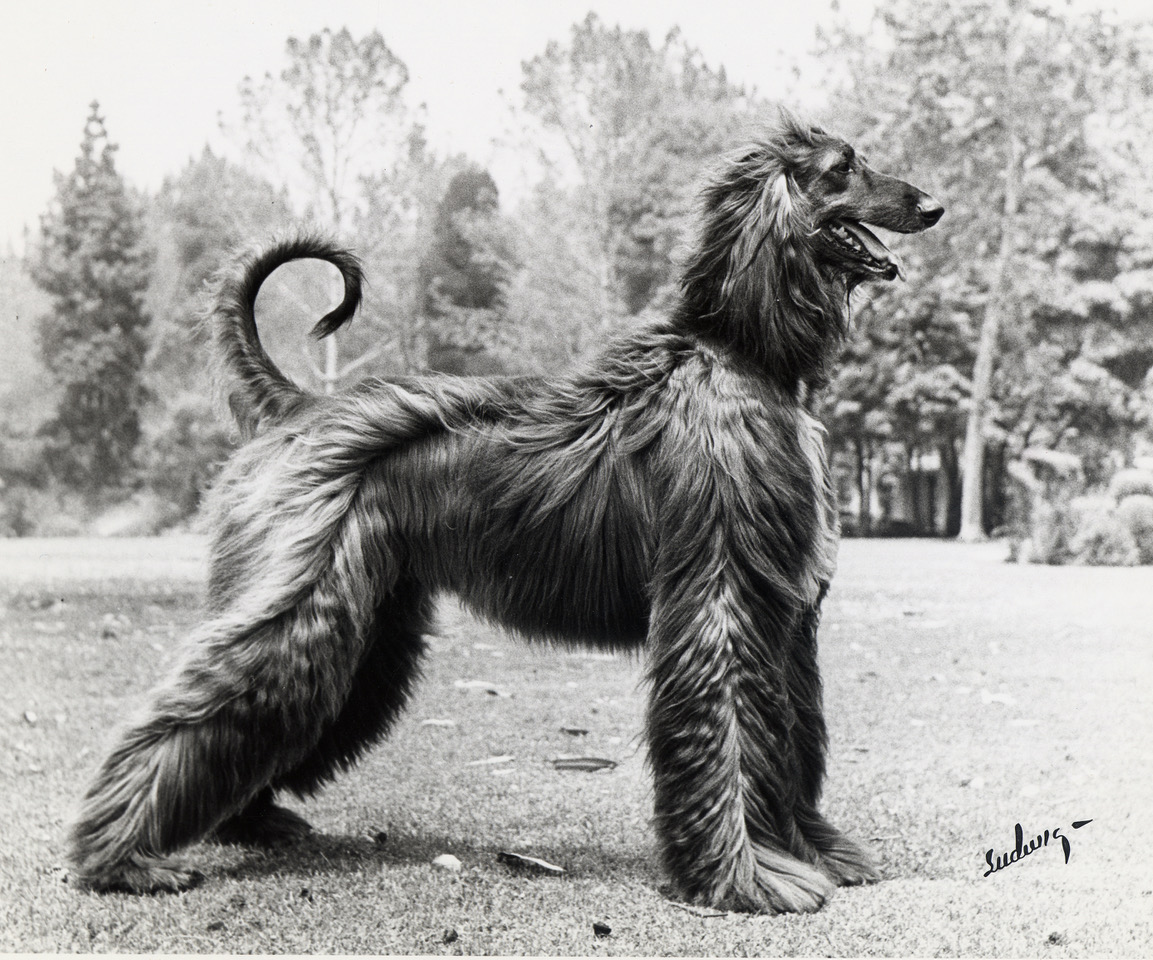 No wonder that Shirkhan was also an extremely influential stud dog. During the Afghan Hound craze of the '60s and '70s his influence was everywhere, including in the hundreds of champions from Grandeur as well as Akaba, Stormhill, Coastwind and many other kennels. I doubt there's any Afghan Hound pedigree in the U.S. today that doesn't have Shirkhan many times over in its extended pedigree.

Then we have to go back another few decades, before anyone who's active today could reasonably have been judging. The Borzoi Ch. Vigow of Romanoff was a big star in his day: in the 1930s, when AKC introduced a competition for Best American-Bred Dog of the year, Vigow won it in both 1935 and 1936. He was Hound Group 1st twice at Morris & Essex and was reportedly killed only a week after his second win there by an ill-tempered bitch in season who had accidentally been let into his kennel. This Vigow never won the Group at Westminster, however: that was left to two otherwise less famous Borzoi from the same kennel. 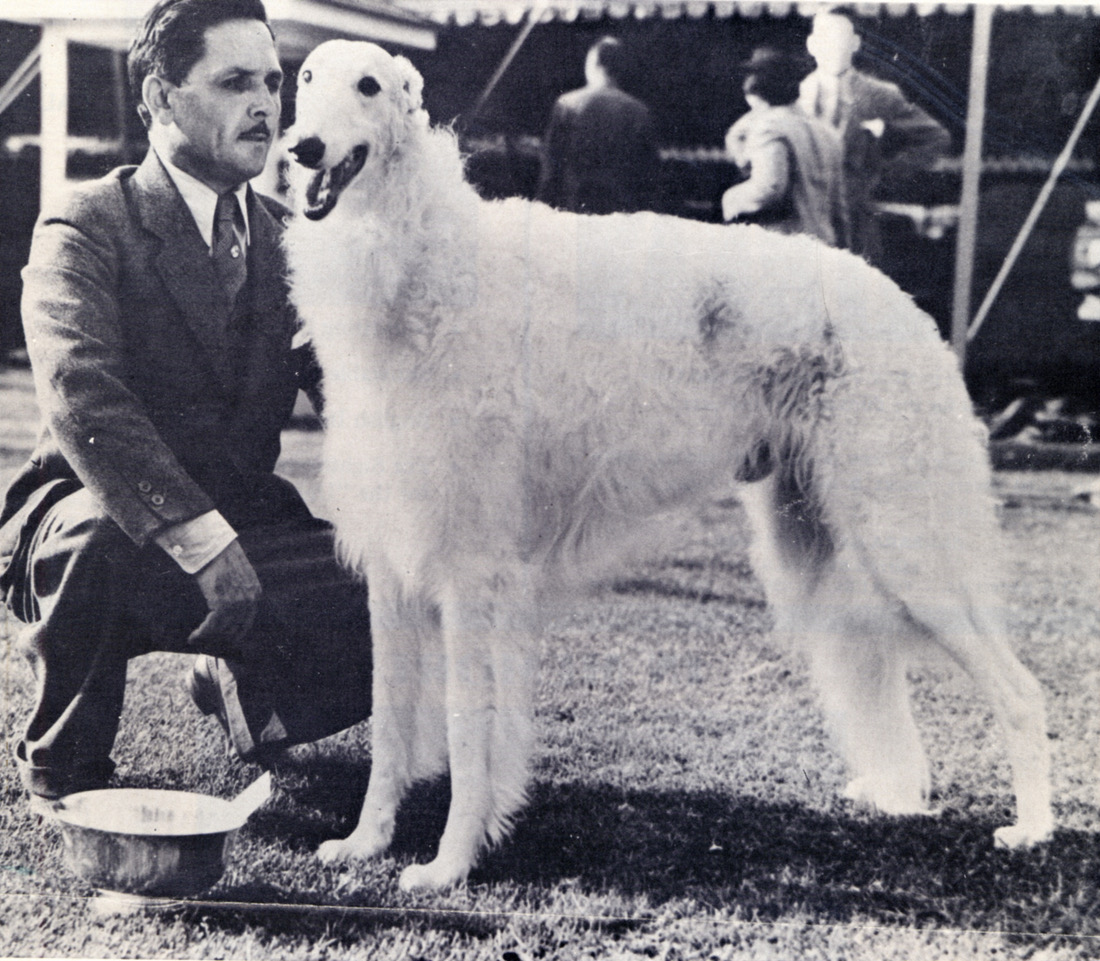 Vigow's owner and breeder Louis Murr — well known as a judge well into the 1960s — won the Hound Group at Westminster in 1942 with Ch. Tyddo of Romanoff and the following year with another Vigow of Romanoff, whose actual identity is unceretain. (It's very complicated. The famous Ch. Vigow of Romanoff isn't even the first Vigow; his sire, Ch. Vigow O'Valley Farms, was born in 1925, also owned by Murr but from the kennel that had imported foundation stock for the breed in the U.S. directly from Russia before the revolution. If it's Vigow of Romanoff II or Vigow of Romanoff III who won the Hound Group at Westminster in 1943 is unclear; neither dog is listed as a champion by the digital Borzoi Breed Archive, and the WKC records have no Roman numerals after the dog's name. Final complication: none of the three dogs that are named Vigow of Romanoff in the BBA fit age-wise. It can't have been the famous Vigow, since not only would he have been more than ten years old at the time, but he was also long deceased — and the other two with that name that I'm familiar with were born in 1948 and 1952, after the win … Sometimes it's not easy doing research on old show dogs!)

Regardless, the famous Vigow is one of those dogs you wish you had been able to see in real life. There are several photographs of him, and he looks outstanding in all of them, combining breathtaking elegance with a measure of power and strength that would intimidate anyone. (I have always wanted Borzoi, males in particular, to look a little like a smoldering volcano, likely to erupt at any moment ...) No wonder that the Romanoff dogs left an indelible impression on some still-active breeders: they came down directly from pre-revolutionary Russian imports from Perchino and Woronzova, and the type has been preserved. Talk about a cultural heritage, especially since even the Russians now treasure the the few links that still exist to the pre-Revolutionary era.

The four Sighthounds pictured are just a few examples of dogs that still look good, at least to me, after several decades. There are many others, of many different breeds, that I'll return to another day. And there are also others who were indubitably great in their own time where the breed type desired today is so different that you can hardly tell from the photographs what breed they are, in spite of all their wins in the past.

Dog News. This article may not be reposted, reprinted, rewritten, excerpted or otherwise duplicated in any medium without the express written permission of the publisher.
Sun, 06/14/2020 - 1:39pm