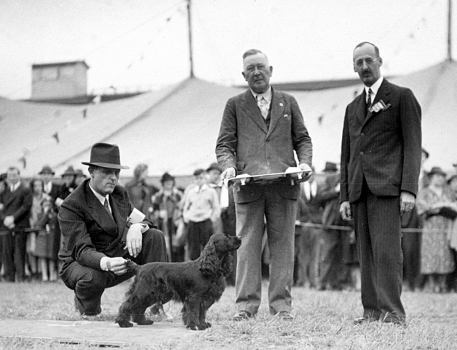 How Great Were They Really, Take 2

A few weeks ago, I wrote an article for this publication that showed some illustrations and asked the big question about some dogs from the past: How good were they? Would they still hold up, if they were around today and had to compete with the current winners? I selected a few good photos of famous dogs, all of breeds I'm very familiar with, and suggested that — given an adjustment to changing conditions — these dogs could still win if they turned up at a dog show today.

Depending on whom you talk to, one of two things almost invariably happens when you do this kind of experiment. Either you will hear how wonderful the past winners were and how there's nothing today that can compare with them — or, on the other hand, whomever you discuss this with will say that the old dogs couldn't win a class of two in competition with any of the current stars …

Nobody knows the truth for sure, of course, although I suspect it varies: Some of the dogs from the past would still look good, some wouldn't. What we THINK we remember is probably as unreliable as anything, and anyway most people have no firsthand memory of dogs from the 1940s, '50s and '60s, let alone earlier. And later than that … Is it even "history" if you're comparing dogs from the late decades of the 1900s with those of the early 2000s? How quickly can any species change its physical appearance? Isn't it mostly the technical advances in photography that make a difference, not to mention changing fashions in the way dogs were photographed? Plus a totally different style of grooming, conditioning and stacking, so the dogs look more "different" than they really are?

Given all that, it’s actually surprising that there are any dogs from the time before 1950 that look like they could walk into a show today and be competitive.

The response to the earlier article was encouraging, showing if nothing else that a surprising number of readers are interested in dogs from the past. The reason it has taken me a while to write the following is that I'm obviously on thinner ice discussing breeds that I can claim no special expertise in: If there's one thing I HATE, it's dog people who profess knowledge about breeds they are not very familiar with. (I take an interest in all breeds, of course, and I even know a little about some that don't belong to my beloved Sighthound group, but I certainly can't claim any special expertise in most of them.)

For that reason, I'll just present a few photographs of dogs that I think either look really good, or the opposite, and ask the question: What do YOU think? It would be interesting to hear from judges who specialize in these breeds. Perhaps I'm all wrong, and dogs that I think look surprisingly good have absolutely nothing to offer today's contenders, while others that I feel are of a type and general "look" that would be completely out of place at today's dog shows might actually represent some qualities that a breed specialist feels we have lost.

Look, for instance, at the photo of the Great Dane bitch Ch. Etfa v. d. Saalburg. She won six Best in Shows over a period of eight years (from 1928 through 1936) — not a greater total than many others of her breed, but won over a much longer period of time. Etfa must have had great lasting qualities; she was imported from Germany by the then very successful Ridgerest kennels of Margaret and Herbert Hostetter of Pasadena, California. (If I know more about them than about most kennels from those days, it's partly because Mrs. Hostetter frequently wrote about the breed in the dog press of the day, and partly because her son, Donald Hostetter — who as a boy worked in a Great Dane kennel in Germany and sometimes handled his parents' winners — later bred more than 20 Whippet champions under his own Lazeland prefix. He lived in Cobham, Virginia.) 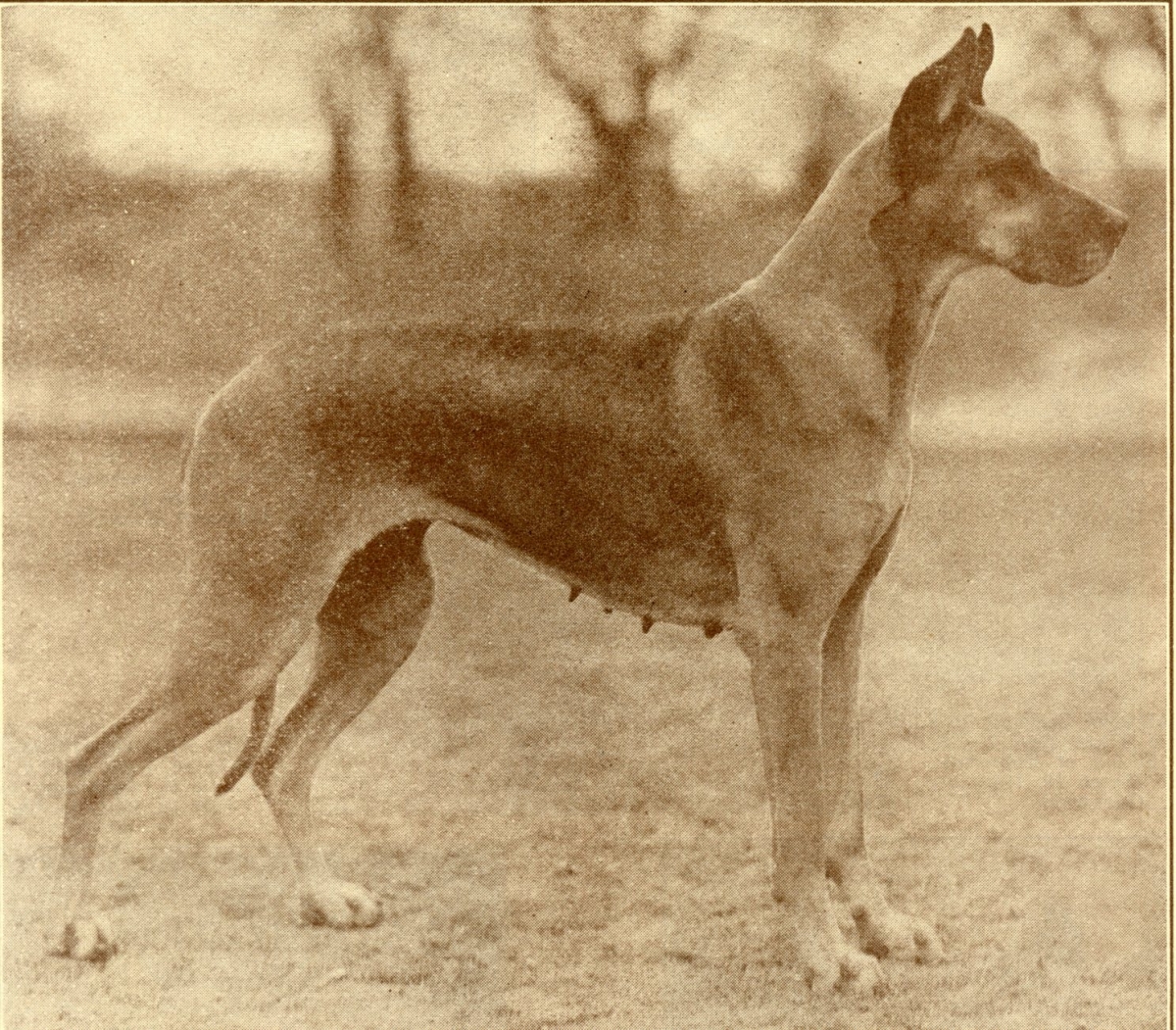 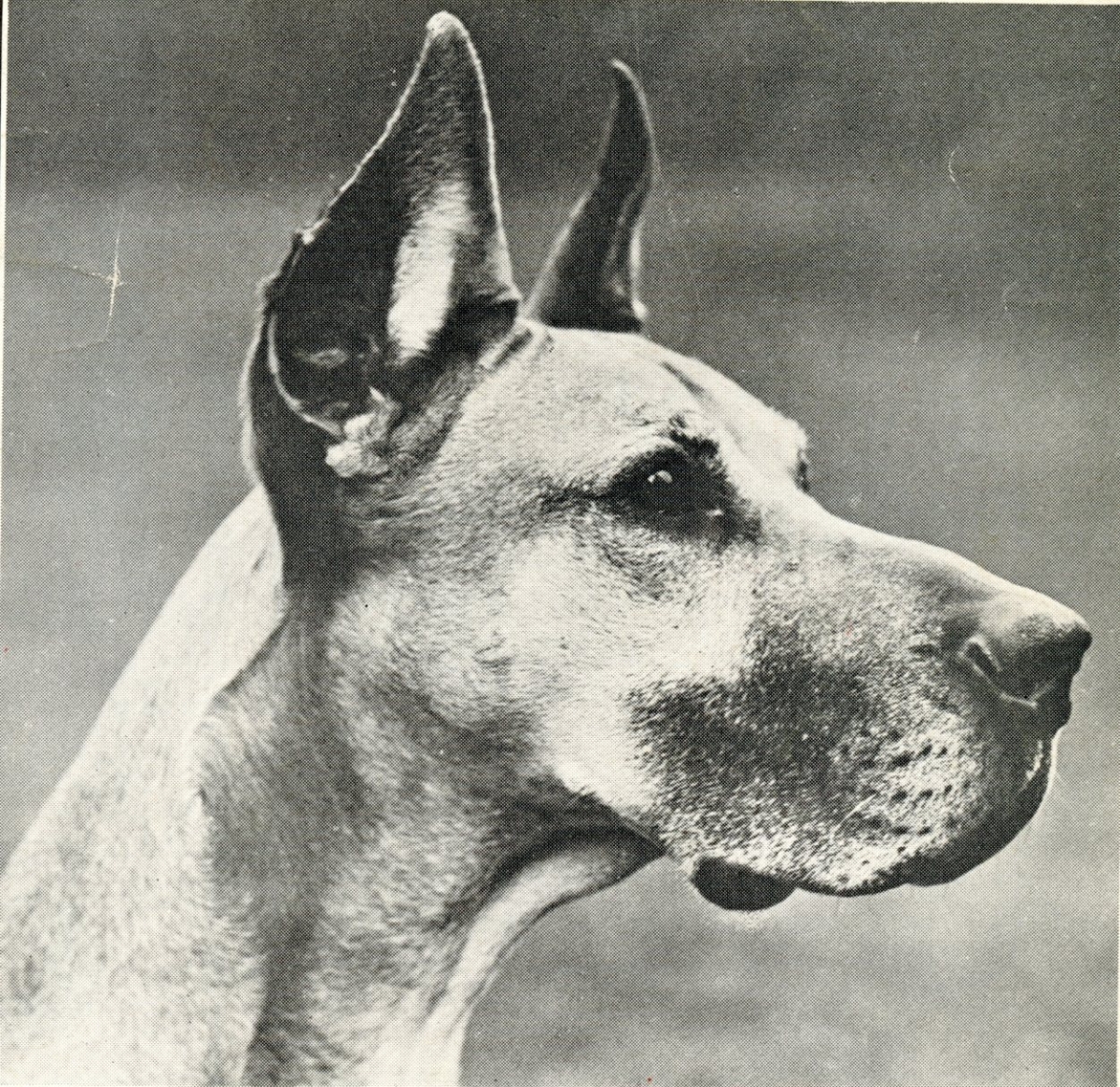 I would love to hear what today's Great Dane specialists think of Etfa. Great Danes were major contenders in the Working Group in those days — Ch. Hansi of Garricrest and Ch. King v. Leonehart won at least a dozen BIS each a little later than Etfa. To me she looks pretty wonderful: Maybe not as clean in the neck as you could wish for? I also thought perhaps Etfa's head was a little plain in the full-figure study, and head properties are of course extremely important in Great Danes … but then I found the head study shown here, which to me looks a lot better. Agreed?

If Etfa was not the greatest winner of all time in her breed, the English Setter Ch. Rock Fall's Colonel certainly was. He is remembered, in fact, as only the second dog in AKC's history to achieve the goal post of 100 Best in Shows. His name may still ring a bell with latter-day fanciers who have heard of his long race with the famous Boxer Ch. Bang Away of Sirrah Crest to the 100 BIS mark (won by the Boxer, a few weeks ahead of the Setter, in 1954). 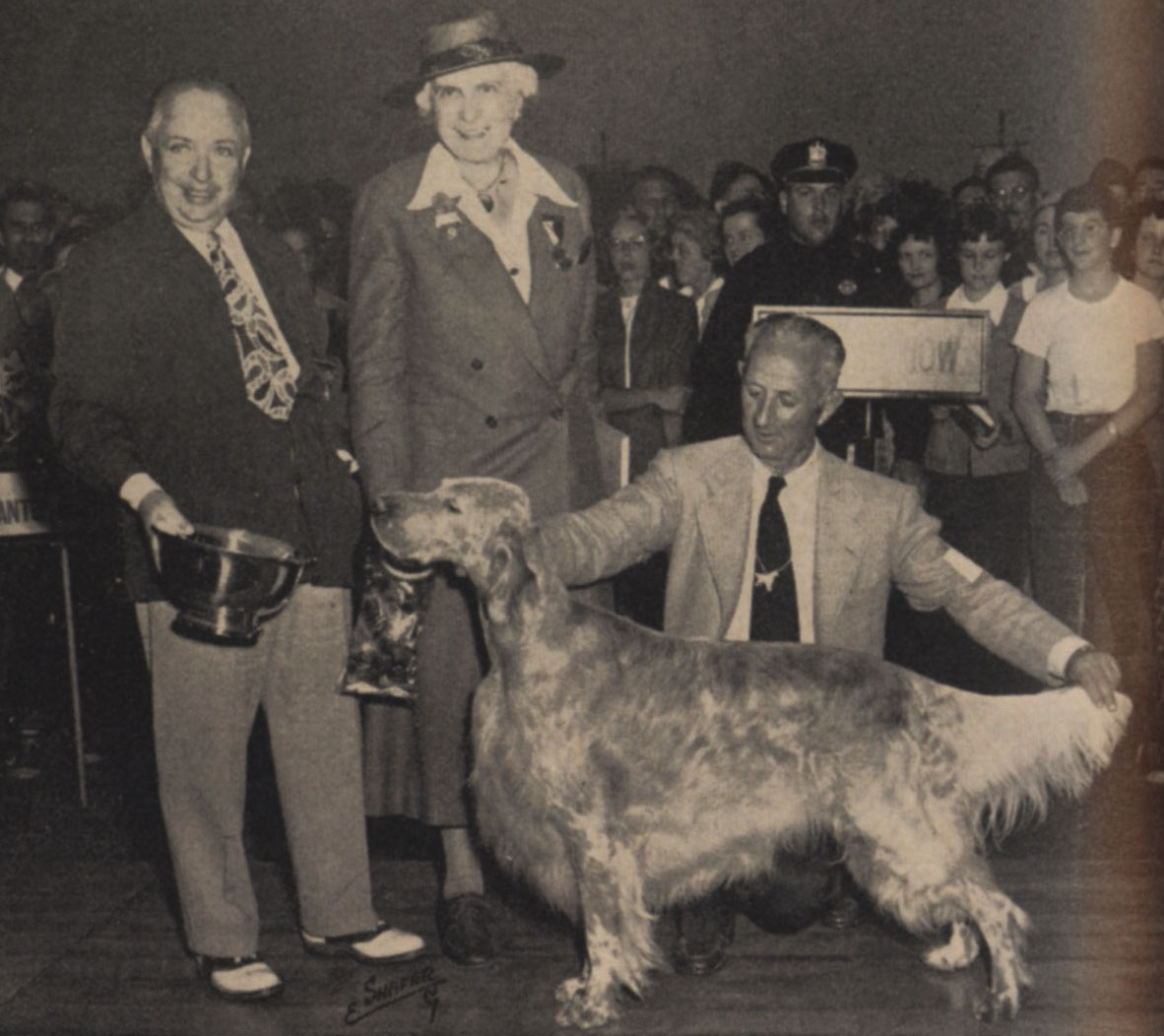 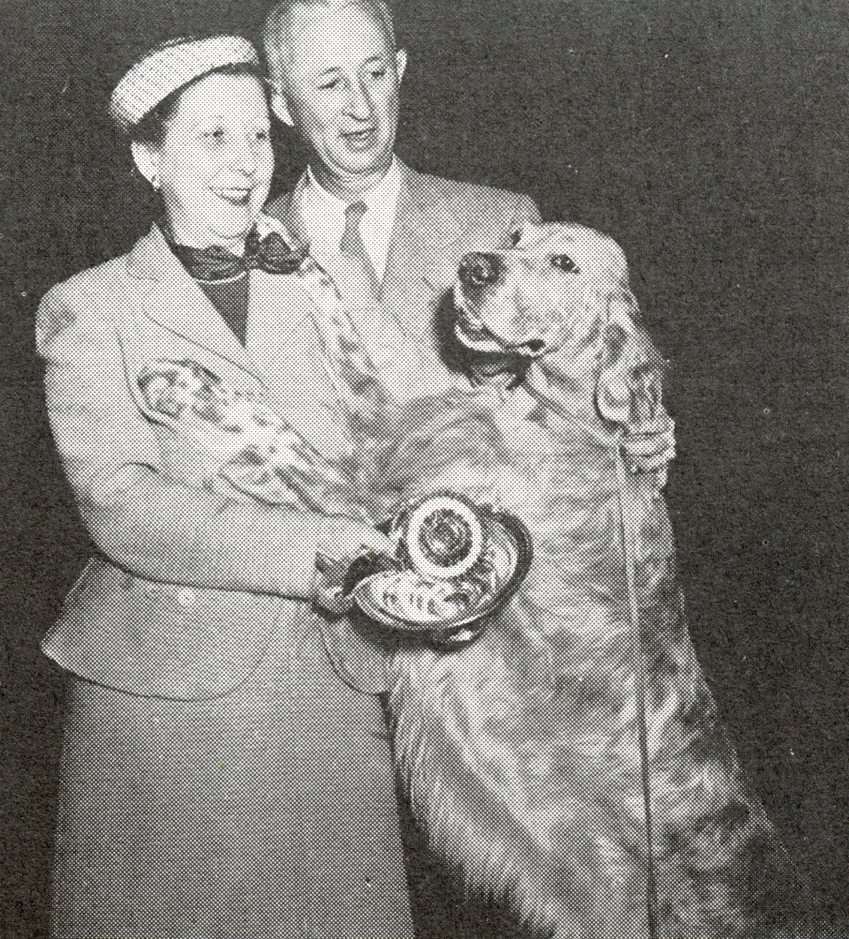 Colonel with his owners.

Colonel won BIS at Morris & Essex in 1951 and didn't look back. He was, in fact, such a consistent winner that he has effectively erased all memory of the many great-winning English Setters that came before him. Literally hundreds of dogs of that breed won Best in Show in the '30s, '40s and '50s. They include such names as Ch. Blue Dan of Happy Valley, twice Best American-Bred at Westminster in the early '30s; Ch. The Country Gentleman, top BIS winner of all breeds in 1933; Ch. Sturdy Max, who beat more than 4,000 dogs to win Morris & Essex in 1937; his son Ch. Maro of Maridor, the top-winning U.S. show dog of the first half of the 20th Century with 55 BIS; and Maro's litter brother Ch. Daro of Maridor, BIS at Westminster in 1938. Those were the days!

Colonel looks like he could still be a successful show dog today. Most of the photos of him are impressive; obviously he would need to grow more coat to compete with today's winners, but this is another dog about which I'd like to hear modern expert opinions. He was described as having "that certain glow about him," and apparently his competitors heaved a sigh of relief when he was finally retired from competition in 1955. (Incidentally, he won 101 BIS total, not 100 as previously reported.)

OK, let's look at a couple of dogs that I am pretty sure would have absolutely no chance at winning today, although they were much admired in their own time. One obvious example is the German Shepherd Dog Ch. Cito von der Marktfeste, imported from Germany and the winner of more Best in Shows than any other dog in the U.S. in both 1928 and 1929. This is more than 90 years ago, and the breed obviously changed pretty drastically in the next few decades: Look at Ch. Ulk Wikingerblut, also imported from Germany and one of the Top Ten dogs of any breed in 1961. He was obviously much lower, longer and heavier than Cito, and except for lacking hindquarter angulation was fairly close to some of today's German Shepherds — right? 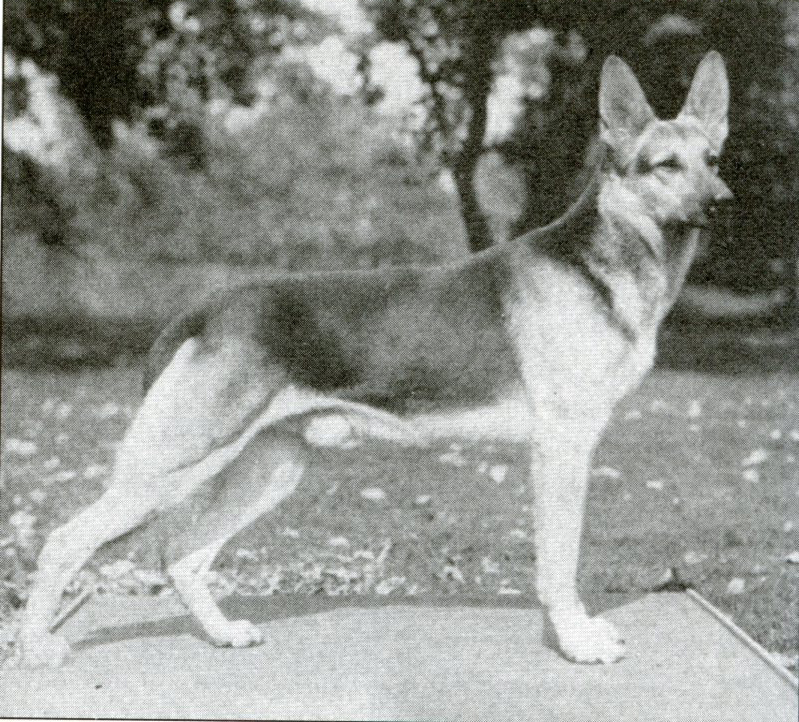 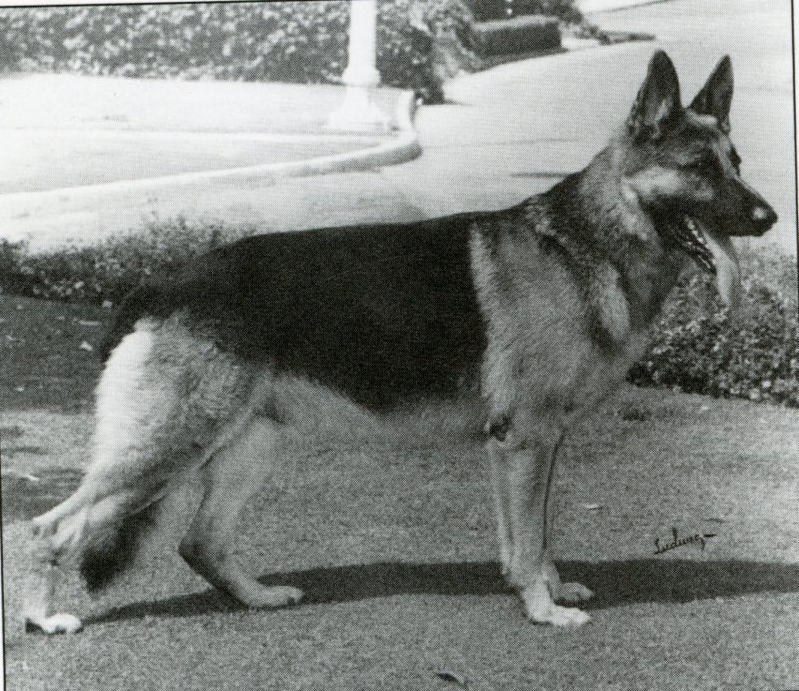 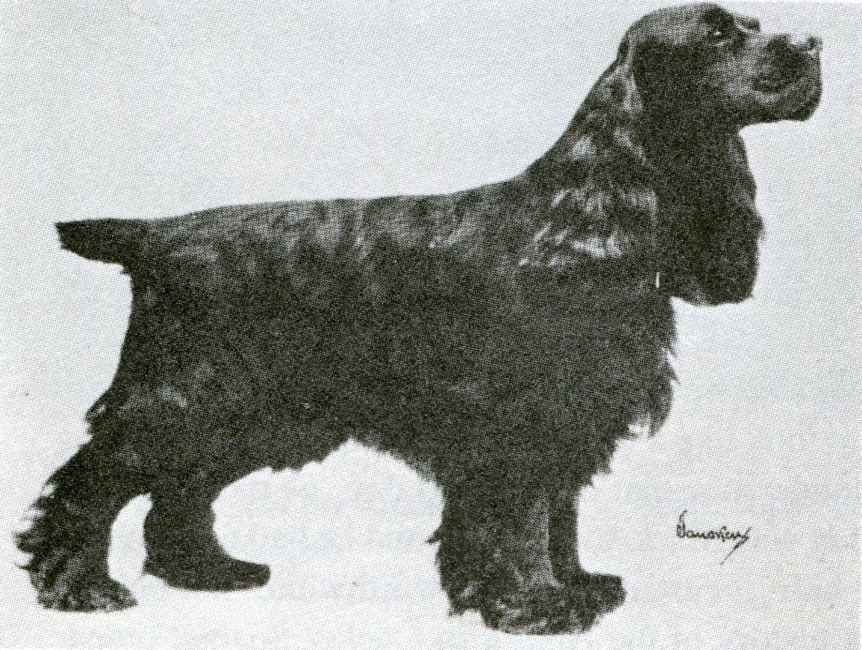 Another dog that I can't imagine would stand much chance in today's competition is a Cocker Spaniel who had one of the most impressive dog show records of all time: twice Best in Show at Westminster, once at Morris & Essex. Ch. My Own Brucie was certainly one of the most admired dogs of the past: In fact, prior to winning back-to-back BIS at Westminster in 1940 and 1941, he also won Best American-Bred dog there in 1939. And the Morris & Essex show he won that same year was the biggest ever in the show's history, with 4,456 entries … Brucie came to notoriety just as the split between American and English types of Cocker came to a head, but just before the breeds were officially separated. Prior to 1942, all Cocker Spaniels competed for a single Best of Breed, although there had been three varieties of Cockers for a few years: "Solid Color," "Particolor" and "English Type."

Perhaps that had something to do with the fact that Brucie doesn't look much like either breed? The Tauskey photo is pretty, but, of course, like all of its kind, fairly heavily retouched. The photo that was taken after Brucie's great Morris & Essex win probably shows the dog more like he really was. Milo Denlinger writes about Brucie in "The Complete Cocker Spaniel," printed in 1947, and more recently also Norman Austin in "The Complete American Cocker Spaniel" from 1993. Both saw Brucie, and both were full of admiration for his owner, Herman Mellenthin, and the way he presented the dog and would make him perform in the ring ... but notably neither raves about the dog itself nearly as much as about some others from the same period. 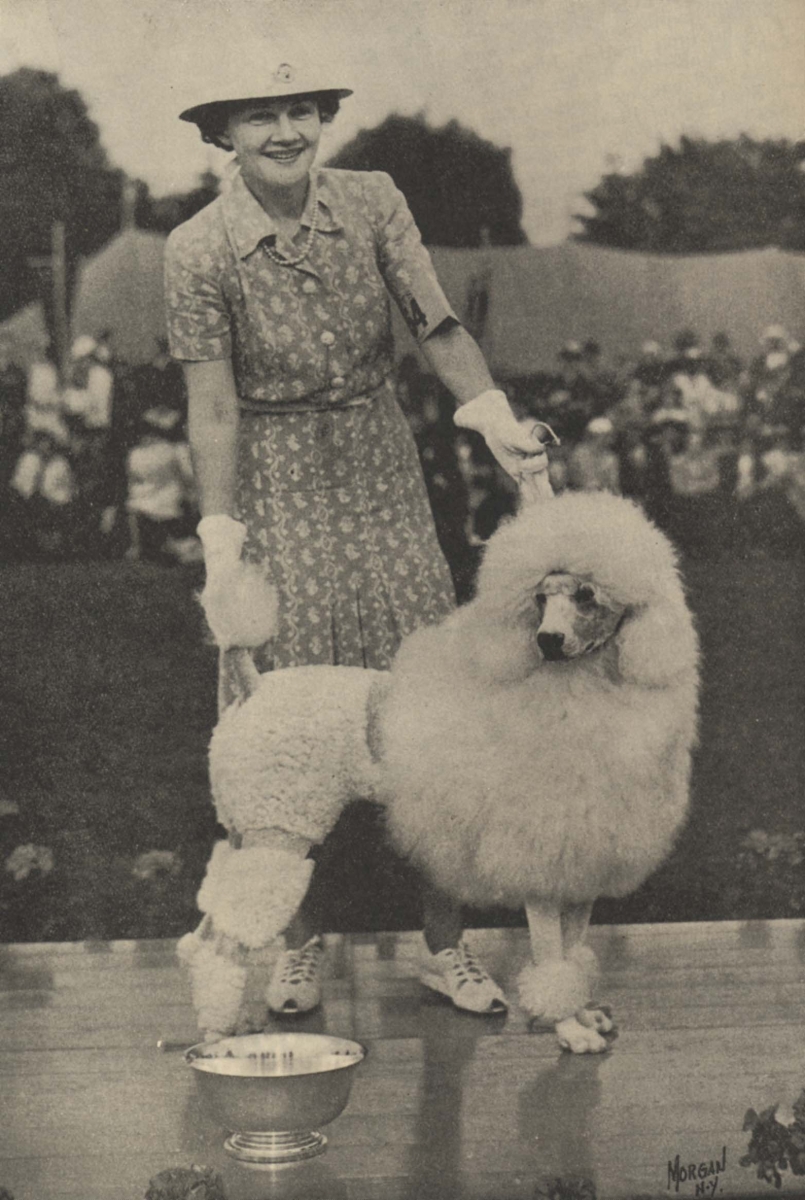 Finally, I can't help printing a photo of the famous white Standard Poodle Ch. Blakeen Jung Frau with her owner and breeder Hayes Blake Hoyt. They won 14 Best in Shows, more than any other dog, in 1938 and BIS at Morris & Essex in 1940; Mrs. Hoyt had been the first woman to win Best in Show at Westminster in 1935 with Jung Frau's Swiss-born sire Ch. Nunsoe Duc de la Terrace of Blakeen. Blakeen is one of the most successful kennels ever in America, with scores of BIS winners of all three Poodle size varieties … but I just can't see this type of Standard doing well today, when a much more elegant type of Poodle is preferred. I remember a video clip of a couple of top-winning Standards from the 1940s moving a little bit like Labrador Retrievers, without the elegance that a top-winning Poodle is expected to have today.

I really look forward to some comments from the breed specialists. Do any of these dogs have anything to offer today's competitors?

© Dog News. This article may not be reposted, reprinted, rewritten, excerpted or otherwise duplicated in any medium without the express written permission of the publisher.
Wed, 08/12/2020 - 9:40pm