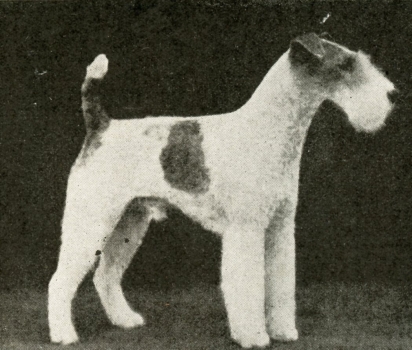 Those Were the Days …

As some of you know, I occasionally post photographs of winners from long ago on my Facebook page. (The page is named “Great Show Dogs of the Past.”) It helps to have access to more than a century's worth of old dog magazines, and I want to share what I've been lucky enough to possess. If this results in someone taking a little interest in what's come before us, so much the better.

I think it's fascinating to see what won in the past: Often you don't understand at all what they were looking for and there is no question that our goals have changed drastically, an idea that is often affirmed by the terrible quality of the photographs and the outdated style of stacking and grooming that was prevalent in those days. Sometimes, if you discount the lack of technical quality in the photograph, a BIS winner from many decades ago could probably enter the ring today and still be competitive.

No breed has changed more than the Wire Fox Terrier … but that could be because what we see in the old photos is almost always a retouched version of the reality. Sometimes the dogs look like wooden toy horses! Of course, these days we have Photoshop; perhaps I'm naïve, but it seems to me that's used more subtly — and if you don't agree you probably haven't seen some of the worst horrors of yesteryear. But even with all the retouching, the winning dogs look rather different THEN than they do NOW.

Once in a while, I come across news items in the old magazines that do not lend themselves well to posting on Facebook, and those I will send to Dog News. 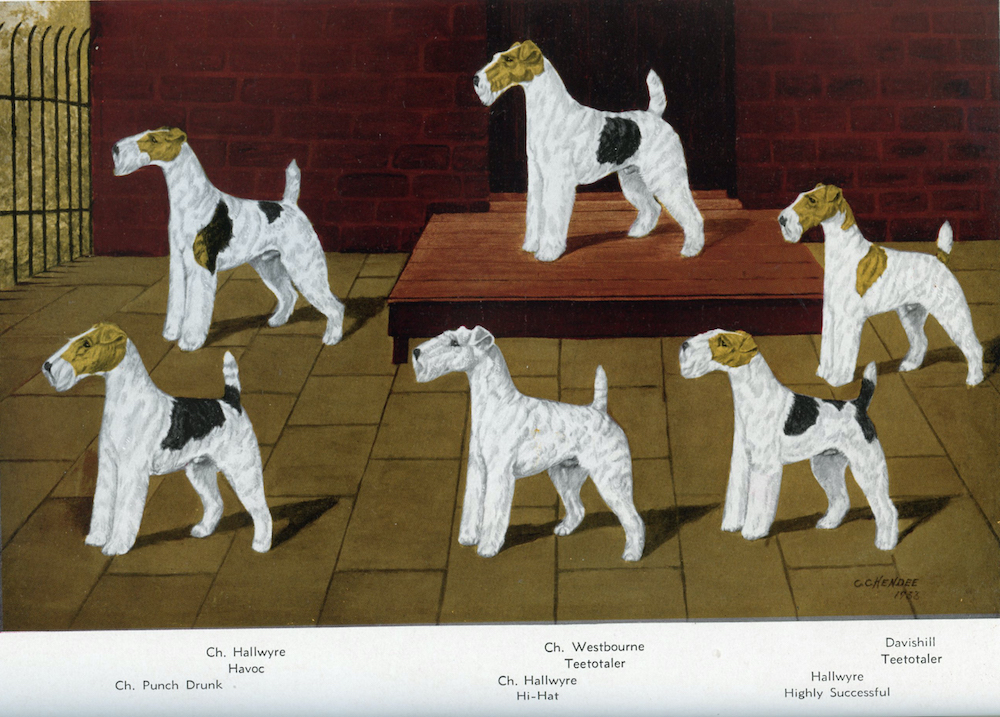 The Fox Terrier pages are fascinating to read if you go back to the 1930s. There's no question that Fox Terriers were the breed with the most intense competition of all 90 or 100 years ago. Whether you're a Terrier person or not, it's easy to get lost in the descriptions of immortal battles between the main contenders of the day — both people and dogs.

These were the days of stars like Ch. Talavera Margaret, Ch. Newmarket Brandy Snap of Welwire, Ch. Weltona Frizzette of Wildoaks, Ch. Westbourne Teetotaler, Ch. Lone Eagle of Earlsmoor and Davishill Little Man, all of them winning many BIS at big shows, and the last mentioned of particular interest because he managed to win at least 17 BIS without competing for points to become a champion! (And if I'm not including several WFTs that won BIS at Westminster in the 1920s and '30s, it's because beyond that victory most of them didn't win nearly as much as those above.) There were professional Wire Fox Terrier men like Percy Roberts, Mac Silver, Len Brumby, Dick Davis, Tom Carruthers, Hardie Albright (“all the way from Los Angeles”) and others who are mostly forgotten today but who helped make the Fox Terrier rings competitive then. “The maestro,” Bob Barlow, sometimes came over from England for the big shows and handled for Mr. and Mrs. Richard Bondy's famous Wildoaks kennel in New York. There was Samuel Milbank, who was show chairman for Westminster, and Forrest Hall, who lived in Texas but had a big Fox Terrier kennel and owned both Teetotaler and Little Man. 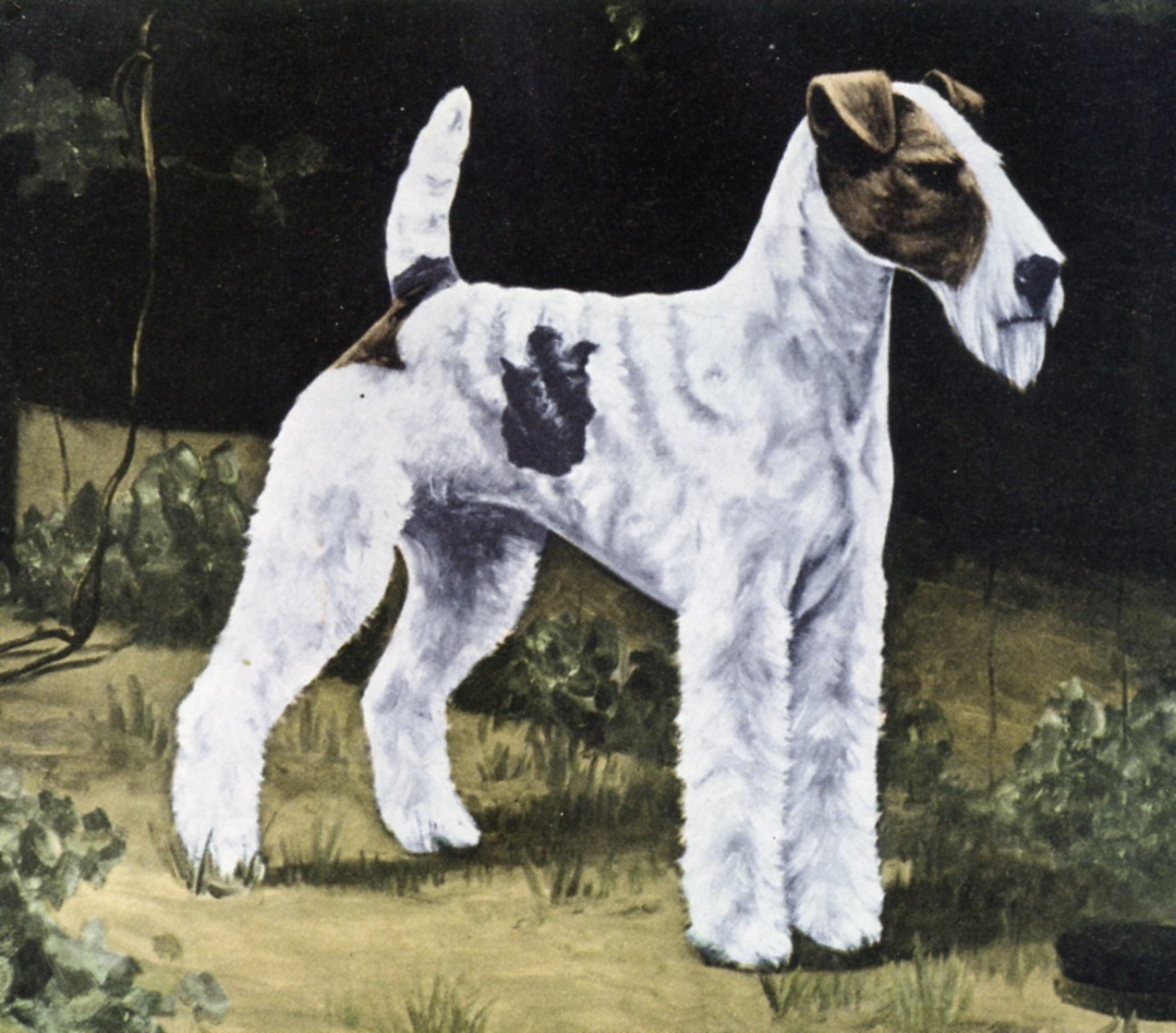 There is much of interest to read in the magazine, but nothing beats two reports that I found from Westminster in 1935. There were 170 Fox Terriers, combining Smooths and Wires, entered that year. The judge was Mr. Geo. S. Thomas, described as “The Father of the Breed in America” and “The Silver Haired King,” and as somebody who “has had his hands on all the ‘greats’ bred anywhere for nearly half a century.” The article's author, H. G. Heath, goes on: “There was a dense crowd of breeders, fanciers and experts jammed about the foxterrier ring when the first puppy class paraded in …” He continues: “With the big gallery to watch him, [Mr. Thomas] judged in his usual nonchalant manner and nobody ever gave a better exhibition of judging dogs of any breed than he did at the Garden. … Mr. Thomas received the greatest ovation I ever heard in a dog show when he carried to Best of Breed, young Robert Snodgrass' (bred and owned by an amateur, shown and put down by this youngster), glorious foxterrier bitch Fox Trot of Macroom. … This very smart bitch, showing beautifully under the careful handling of her owner, waded right through from open bitch, to winners, best of winners and best of breed.” 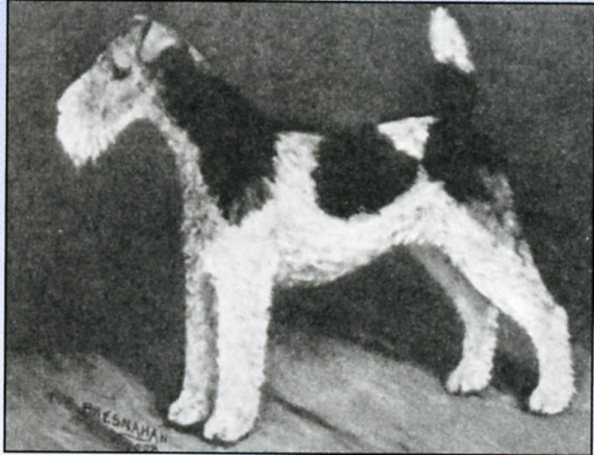 In a separate column, Hardie Albright writes: “Well, Mister, I saw it! I saw a crowd stand and cheer a trembling boy and his dog — saw hundreds of people just like one, keep their minds intensified on that boy and dog winning — leaning and straining until the award was made, then bursting into applause that sounded like rain on a tin roof.”

Albright also mentions that Robert Snodgrass had been breeding Wires for all of four years and that the Westminster winner was from his second or third litter. In the ring, “young Snodgrass, who looks all of eighteen years old, never detracted from his house pet and gazed like a lovesick schoolboy at her. He brushed her carefully, diligently, and placed her when she would step out of pose. However, the bitch needed very little attention and Bob conditioned her beautifully. Her coat would have been a credit to a Brumby, a Mac Silver or a Davis. And he did every hair of it himself.

“What a stimulus this will be to the ‘little guys’ — the owners of two or three dogs. All over our nation you will find these ‘little guys.’ They can't afford to buy the fashionable winners. Couldn't even afford to pay a professional handler if they ever bred a good one. Yet these little fellows who plan their own matings, care for them, condition and show them on their own, are the backbone of the Wire fancy, the Westminster show — in fact, the American Kennel Club itself.

“Therefore, I feel sure that the ‘Garden’ Governors and the executives of the A.K.C., were as thrilled with Robert Snodgrass’ triumph as the emotional ladies sitting near me, who shed actual tears of joy at Bob's Lindberghian modesty and the success of his well mannered lady.”

About the Best of Breed judging, Arbuthnot write: “Poor young Snodgrass was scared to death — G.S.T. picked up his judges book and the huge arena was hushed … Suddenly he turned and handed the Best of Breed ribbon into the palsied hand of our South Hanson breeder-owner-handler! And right then and there the other boys turned and congratulated him — warmly —  sincerely with big happy genuine smiles. Barlow, Percy Roberts, Mac Silver, Len Brumby, Warburton, Craighead and Fredd.

“Oh! When will people learn that this and this alone is why we have dog shows? Not to make shows into a tawdry racket, or a means to inflate the vanity and deflate the pocketbook of some bored dimwit. But for such a boy and his dog! The boy is using the brains of his head for some selective breeding to a standard, and the skill of his hands in putting his dog in condition — and this boy and this dog casting their lot against the traditions of the Westminster past performances, the experience of the professional and the screaming money bags of the dull! Meeting all these — and winning!”

Pretty strong words, right? Has anything really changed? It's interesting to me that even almost 90 years ago it was obviously a big deal that an “unknown” should defeat the big names: so much for “winning at Westminster” being a free-for-all in the old days. It's also fascinating that a “father of the breed” would do his own thing, supporting my assertion that judging is most fair when the judge is such an expert that he (or she) doesn't have to look at anything except the intrinsic quality of the dog. 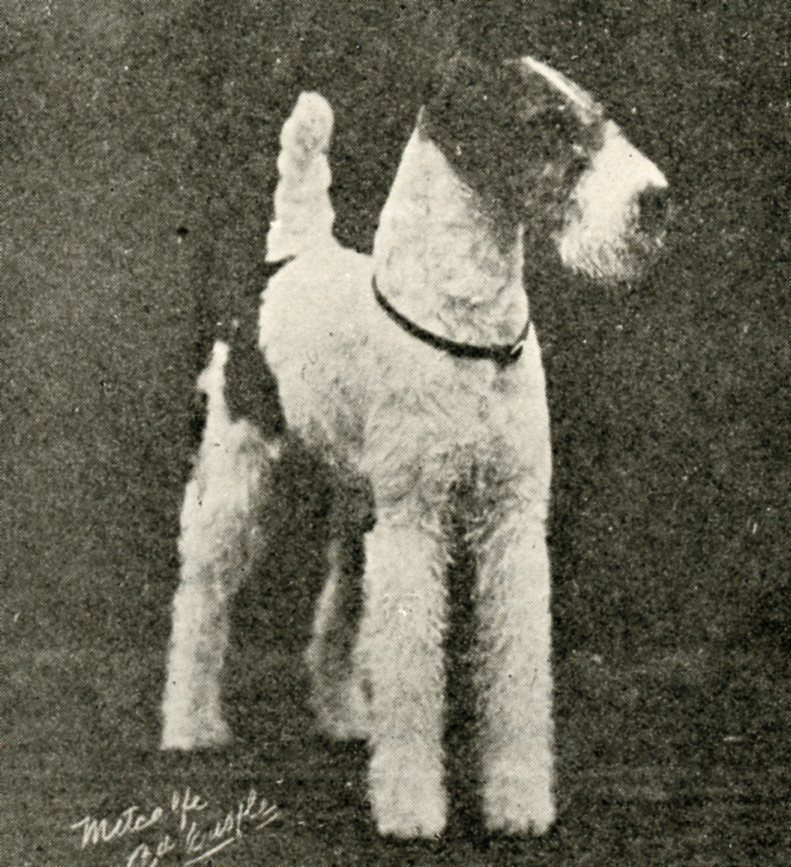 And what about “youth”? Robert Snodgrass may have looked like 18, but he was in fact 26 years old when he won. That's young, but at that age you're not “a boy” any longer, in fact by almost any standard an adult. So perhaps it's not only in the last few years that there have been very few really young people showing, and winning, with dogs.

I had never heard of Robert Snodgrass until I read about this win, and I have found no photo or details of what became of his Westminster winner. My go-to breed experts in Fox Terriers, however — Geir Flyckt-Pedersen and Bill McFadden — recognized Snodgrass’ name immediate, and Bill sent some photos of Snodgrass winning — including BIS — with a couple of Wildoaks dogs more than ten years later. Obviously he remained involved in dog shows and continued to win with Wire Fox Terriers.

The above is almost entirely about Wire Fox Terriers; the Smooths had a comparative down period while the Wires were at their height. There had been four consecutive Smooth BIS wins at Westminster early in the 1900s, and by the late 1930s the top-winning Fox Terrier was again a Smooth, the immortal Ch. Nornay Saddler. However, although entry figures in later years have been lower, the Wire Fox Terrier still often goes to the top at the major shows. They have won far more at Westminster than any other breed, for instance – I count 15 BIS, most recently in 2019 by the Belgium-bred GCh. King Arthur van Foliny Home.

Who was George Thomas? 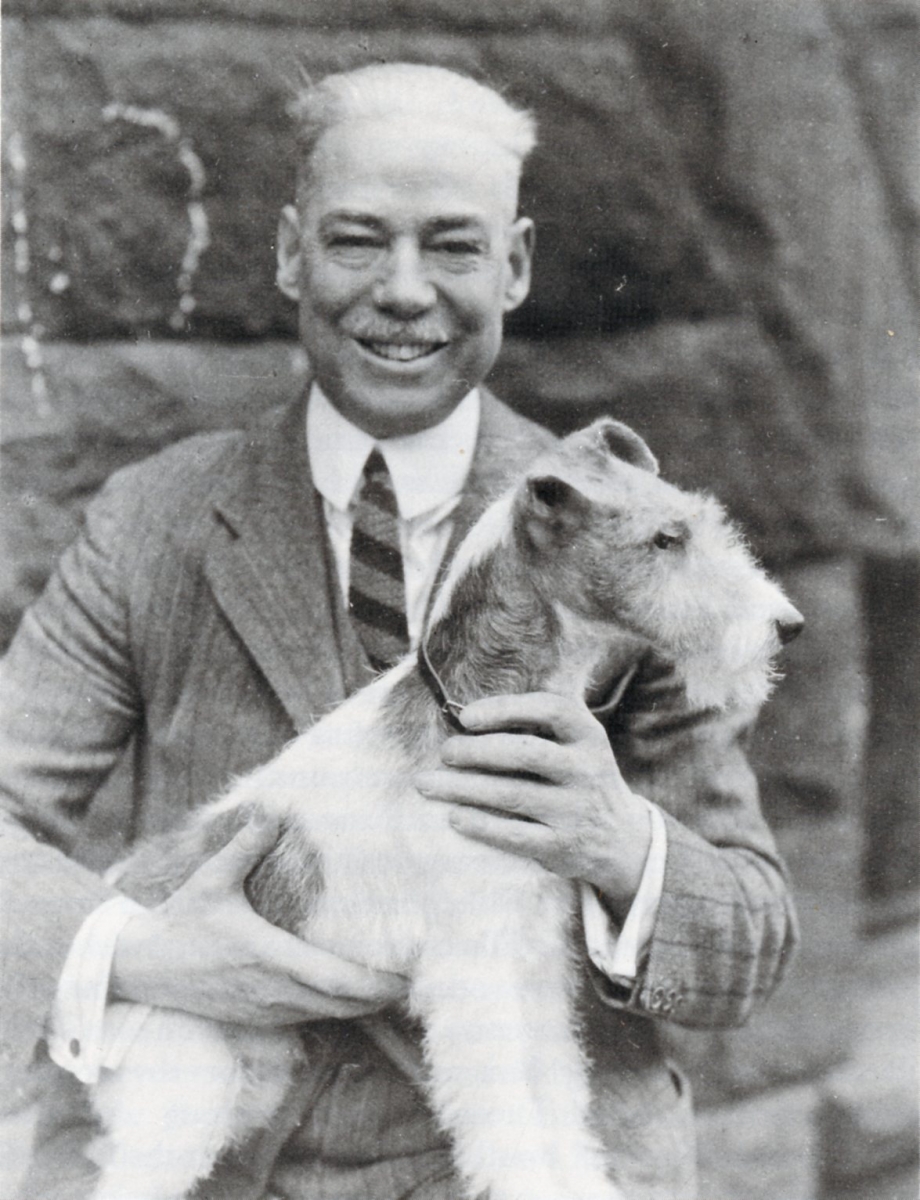 Thomas officiated at top shows in the U.S. and overseas. In 1933 he was granted a license by the AKC to judge all breeds. One of the last shows he judged was Morris & Essex in 1952, where he gave BIS to the Wire Fox Terrier Ch. Wyretex Wyns Traveller of Trucote. Thomas died on April 2, 1955, and is buried in St. Louis, Missouri.

© Dog News. This article may not be reposted, reprinted, rewritten, excerpted or otherwise duplicated in any medium without the express written permission of the publisher.
Mon, 12/13/2021 - 12:29am