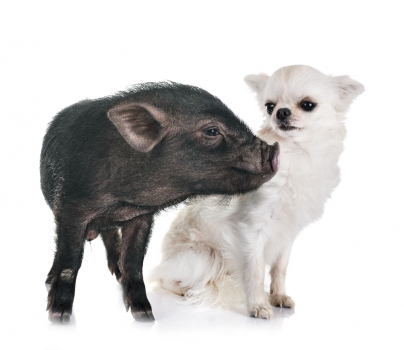 What dog people can learn from pig showing
By
Bo Bengtson

"The pig exhibitors take showmanship to a new level …"

Have you seen the pig show on TV? The New Discovery+ series "Pig Royalty" made its debut on March 23. I heard it was the perfect follow-up to "Keeping Up With the Kardashians," so of course I had to watch it. Just kidding: I lasted about three minutes … but seriously, it gives you something to think about if you're a dog-show person.

It always amazes me, incidentally, that so few dog people know that almost all domestic animals are regularly exhibited at conformation shows. When you tell them that there are thousands of people doing exactly what they are doing — with a different subject — they are usually surprised. There are cattle shows (with verbal critiques, no less), sheep shows, horse shows, cat shows and bird shows — often divided further by breed. Most of them even have the equivalent of our "national specialties" with several hundred competitors.

If I'm a little more familiar than most with different kinds of animal/livestock shows, this may be due partly to inherent curiosity, but also because my partner, Paul Lepiane, has in the past shown horses, sheep and pigeons, and through him I have learned a few things. Showing pigeons is VERY competitive, for instance, with hundreds of entries in the most popular varieties. (Paul showed Modena pigeons, which look somewhat like a regular pigeon crossed with a very short and chunky Pomeranian … They are not great fliers and come in several color varieties, e.g. Gazzi [pied] and Schietti [no white markings], that are judged separately.) The pigeon show world in the U.S. has retained some of its British roots to a much greater degree than dog shows, with for example Challenge Certificates awarded to the winners.

For his Suffolk sheep, Paul had a professional hander; I remember that their toplines had to be completely level, which could be achieved, if not by nature, then by clever grooming … And nobody in their right mind would compete in a conformation ("halter") horse show without being an expert: Getting a fiery performance out of about 1,000 pounds of horse flesh is not something you attempt without knowing what you're doing. I recall that one of the professionals, who was specializing in showing Arabian horses, was completely shocked to hear that we dog people often go to dozens of shows per year, frequently more. If you took a horse to more than three or four shows per season, it would be more than most — but of course it's not possible to throw a couple of horses in the back of a van and drive to the show. It requires considerable more equipment, planning and expense.

The pig exhibitors take showmanship to a new level, at least judging by this TV series. It's not a documentary, so the producers are bound to take certain liberties and quote comments out of context. That's my concern for dog people: If they did a similar show about dog people, would we seem as inane and unpleasant, or unintentionally funny, as the pig people do?

The focus in the segment I saw was very much on Junior Showmanship — yes, that's a big part of pig shows, divided into Pee-Wee, Junior, Intermediate and Senior divisions. I'm afraid several of the exhibitors interviewed reminded me very much of a certain type of person I've seen too much of at dog shows. There were these very glamorous girls, who were so "done" — perfect makeup, immaculate hair, top buttons of the shirt undone and short dresses — that it's difficult to imagine them within 500 yards of a hog. (And by their own admission, they can be very unpleasant to the competition: Intimidation is very much alive in pig showing!) There were little boys who cried when they didn't win and parents who were almost scary in their need to see their children get ribbons …

Pigs are shown loose, with only a stick for the "handler" to control his (or her) charge. There were training sessions, where the main consideration drilled into the kids seemed to be the importance of locking eyes with the judge, to "find your spot" away from the competition, and of not cutting corners when turning, since the judge might get an unflattering view of the animal … And there was the focus on appearance in the handler, which is so typical of dog-show exhibitors, especially in Junior Showmanship. At least the boys didn't seem to wear jackets, but they had ties, and there were little girls with big bows in their hair — the bane of more talented but less "cute" handlers ever since Jane Forsyth was a kid more than 70 years ago …

The accusations aimed at the successful exhibitors were as bad as those at any dog show, or worse. Sleeping with the judge to win and juicing your exhibits by illegal means were just some of the rumors aired by competing exhibitors.

It was frankly a little difficult to remember that these were pigs being shown, especially when some of the fanciers confessed that they were sometimes better fed and housed than their human counterparts. And the grooming, let's not forget the grooming … I didn't know you could do so many different things to increase a pig's very limited aesthetic appeal! It was something of a let-down to hear one fancier say that pig feces smells just as bad as you would imagine, "just awful," but the same exhibitor went on to say that she doesn't mind too much, because pig sh-t "smells just like money to me …" (Perhaps the biggest difference between pig and dog shows is that you can make money at the former: One girl apparently has made $65,000 in one season, another paid for her college tuition with her winnings from pig shows.)

We haven't seen anything about dog shows on TV recently other than the fairly straightforward reports from the Group and Best in Show competitions at Westminster, the so-called National Dog Show in Philadelphia, and that big AKC event in Florida … The last TV show to make fun of dog people in the same way as "Pig Royalty" was probably "Showdog Moms & Dads" in 2005. That consisted, among other things, of a few naïve dog people letting TV crews into their homes, getting footage and sound bites that did a lot of damage to serious dog shows.

I hope that anything like "Pig Royalty" won't happen to us dog people anytime soon — or that we'll be too smart to let them quote us out of context.

© Dog News. This article may not be reposted, reprinted, rewritten, excerpted or otherwise duplicated in any medium without the express written permission of the publisher.
Tue, 04/06/2021 - 10:54pm