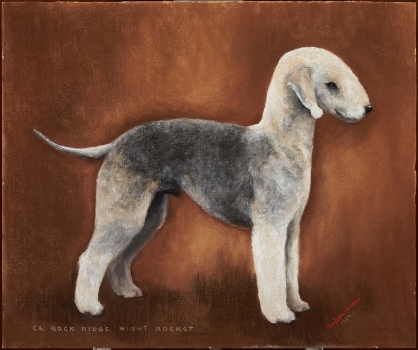 The Bedlington Terrier Ch. Rock Ridge Night Rocket (“Timmie”) is the only dog ever to win BIS at Morris & Essex twice. It happened a long time ago, more than 70 years. Today of course most people don't know much about what happened at dog shows at that time, but Timmie is in fact even less well remembered that many of his contemporaries.

If, in certain circles, you say the names of Saddler, Bang Away, Brucie or Colonel, you get a much more immediate response than if you mention Timmie. (These are, admittedly, fairly rarefied circles … An abundance of historical knowledge about our sport's glorious past is not anything that most people are gifted with, unfortunately.)

Yet none of these dogs — except Timmie himself, of course — won Morris & Essex twice; the famous Boxer Ch. Bang Away of Sirrah Crest never won BIS there at all. Some that won M&E once – for example, the Smooth Fox Terrier Ch. Nornay Saddler and the English Setter Ch. Rock Fall's Colonel – never won BIS at Westminster, and the only one of them that won BOTH Westminster and M&E, the black Cocker Spaniel Ch. My Own Brucie, frankly looks very different from the Cockers that win today, at least judging by the photographs I have seen. (To be fair to Brucie, the Cocker breed at that time was going through the convulsions of being split in half; Brucie experienced his greatest success during the years immediately before the “American type” of Cocker was being separated from the English and eventually recognized by AKC as a breed of its own in 1946.) 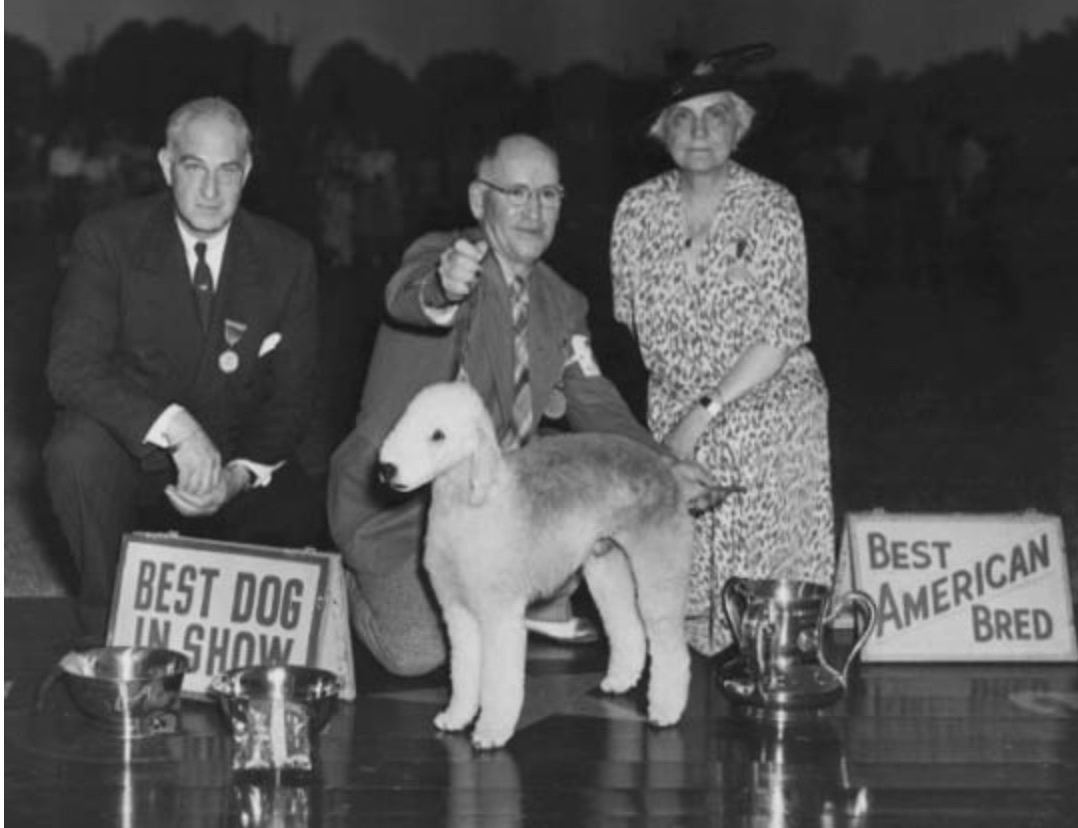 Timmie, however, doesn't really look like a dog that was shown many decades ago. (You have to discount the style of the photographs of him, the surroundings and people's dress, of course.) There are differences from today's top-winning Bedlingtons, sure, but it's surprising how similar in type they look: Timmie really looks rather modern.

Timmie's background contains ingredients that you would think might help make his story interesting: A hardscrabble couple arriving from abroad to the U.S., and a dramatic phone call from a member of America's wealthiest family that in one stroke turned their fortunes around … The couple were Anthony and Anna Neary, who moved to America with their two Bedlington Terriers in 1929, reportedly from the small town of Bedlington in the north of England that gave the breed its name.

“They [the Nearys] rented a small house on Long Island and proceeded to breed these dogs with the hope of introducing their favorite breed in America,” wrote Muriel Lee in The Official Book of the Bedlington Terrier. “They put their very limited funds into breeding and attending Eastern dog shows on the weekends, driving up to the show sites in their ramshackle car, competing with the wealthy owners' dogs and their handlers.”

One of the shows that the Nearys exhibited at was Westminster. They sometimes did quite well: In 1940 one of their dogs was Best American-Bred Terrier (an award that doesn't exist anymore), which occasioned the phone call that changed the Nearys' lives, and eventually dog-show history. William A. Rockefeller had been a spectator at ringside at that Westminster; he liked what he saw, offered to buy the dog and gave Anthony Neary a job as his kennel manager. 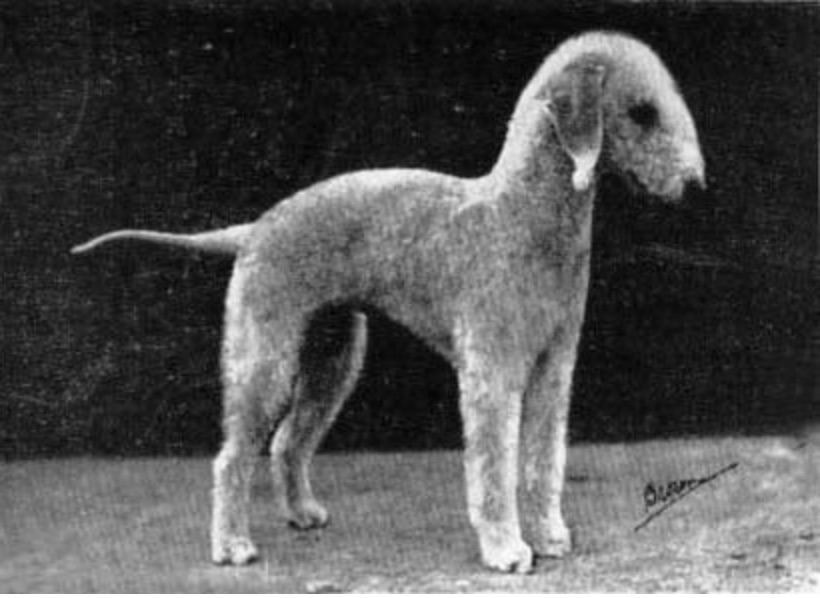 Thus was the Rock Ridge kennel born. It experienced great success over many years, but there was no question that Timmie was its brightest star. He came from several generations of the Nearys' bitches and was sired by a dog called Ch. Canis Laris, who in turn was the result of breeding half-brother to half-sister: Both his parents were sired by the famous stud dog Ch. Tarragona of Rowanoaks. Since Timmy's mother was also a granddaughter of Tarragona, he occupied three of the four positions as great-grandsire in Timmie's pedigree. Tarragona was an English import, which must have appealed to the Nearys, although he was registered with his American owner's kennel name. 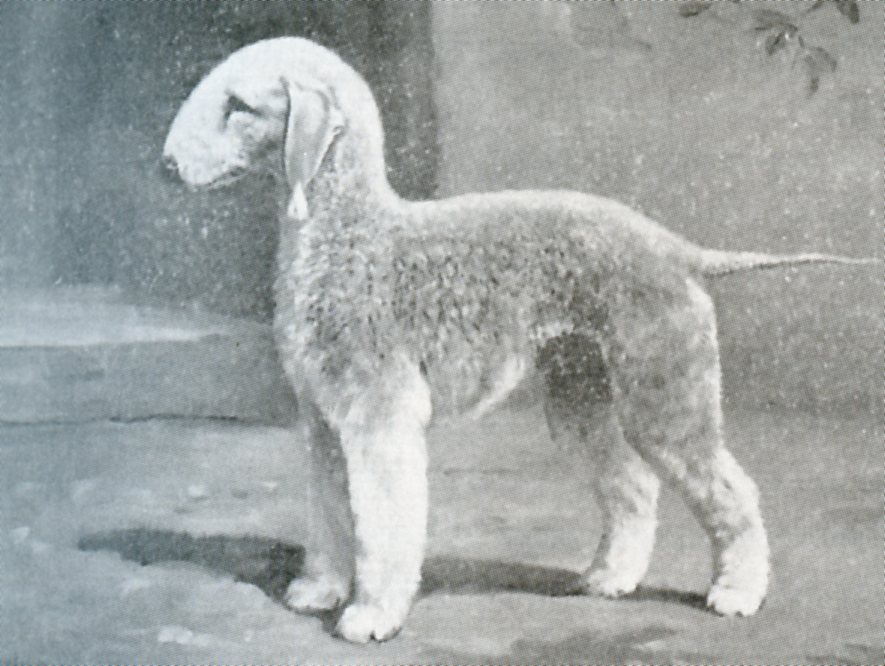 The highlights of Timmie's show career are well documented. He was less than 14 months old when the won Best in Show at Morris & Essex Kennel Club the first time: Timmie was born on Wednesday, March 6, 1946, and the show was held on Saturday, May 24, 1947. He was not yet an AKC champion, won BOB from the Open Dog class, the Terrier Group and Best in Show under judge Joseph C. Quirk of Greenwich, Conn. (Mr. Quirk, who judged many times at Westminster, incidentally, died in San Francisco in 1969, shortly after arriving by plane to judge a dog show there.)

There were 2,372 dogs entered at Morris & Essex in 1947. This would be a large AKC all-breed show at any time but was far from a record for M&E: The show that year was limited to only about 40 breeds, which made for a lower total but huge breed entries. AKC recognized at least 100 breeds then — far fewer than today — but M&EKC was often limited to those that the show's organizer, Mrs. Geraldine Dodge, felt were most likely to support her show.

How many Bedlington Terriers there were when Timmie won in 1947 is not known, but 10 years later there were 88, including 31 specials. Bedlingtons were in fact one of the biggest breeds, numerically, at Morris & Essex that year.

Then came Westminster in 1948, where Timmie won Best in Show again, this time over 2,540 entered dogs. The judge was Dr. Samuel Milbank, one of the most experienced dog men around. He had judged BIS at Westminster on an earlier occasion (1940), had won BIS at Morris & Essex with a Wire Fox Terrier in 1932, and also judged BIS there in 1937. The newspapers had a field day, joking about the canine bluebloods with the blue-coated dog winning over them all … 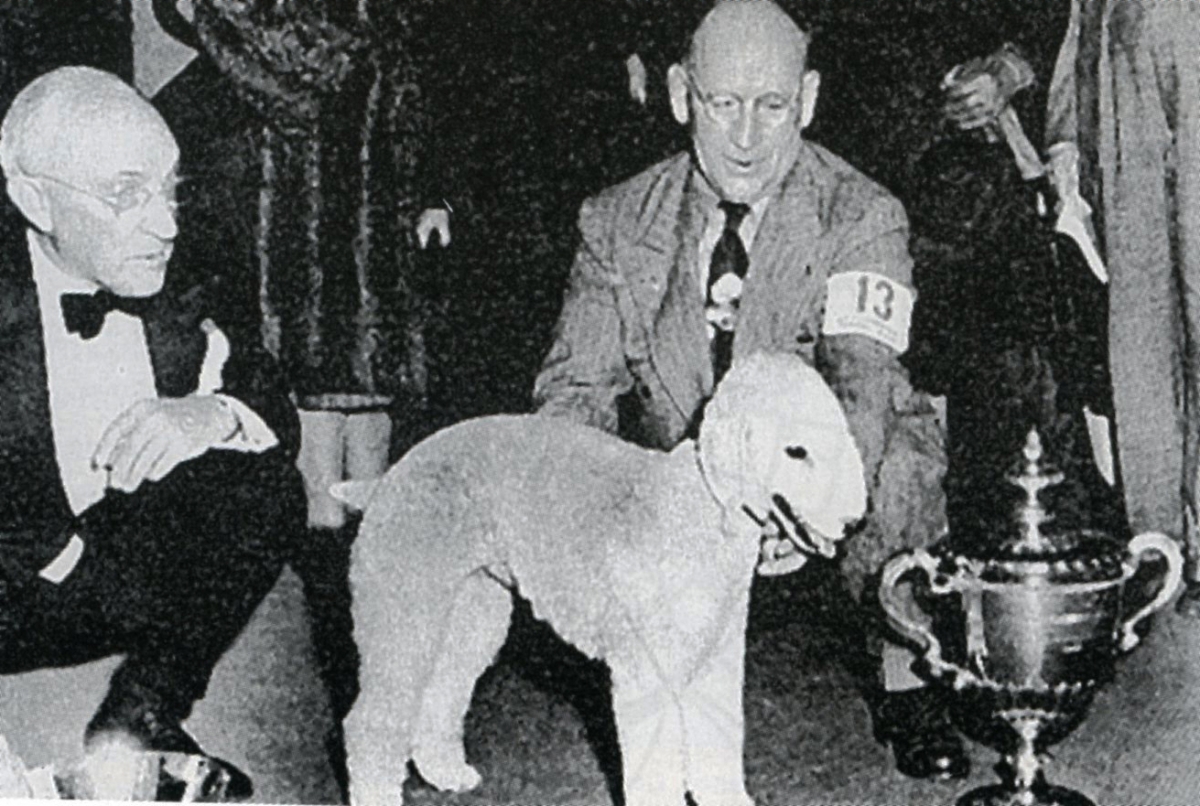 Timmie at Westminster in 1948.

After that Timmie was not shown until Morris & Essex came around again in May, this time with 2,665 dogs of 38 breeds (an average entry of a little more than 70 dogs per breed). Timmie was BIS there also, handled as always by Anthony Neary. The New York Times called Timmie “the greatest show dog in America” and quoted Alva Rosenberg, who made the final decision: “I haven't judged him [Timmie] for a year, but he is just great as a dog as he was then. He hasn't coarsened in any way, moved perfectly, was in perfect condition and fine coat. He beat a grand lot of dogs, but he won easily.” And then the clincher: “I'd say without reservation that he is one of the best I've seen in 38 years of judging.”

That's very high praise coming from a judge who was generally considered “the dean of American dog show judges.” Many old-timers still active today remember Mr. Rosenberg affectionately as a gentleman, a humble, gentle man and a truly great judge — possibly the greatest of them all. He started judging as a 17-year-old in 1910 and by the time he died in 1973 had judged at more than 1,000 dog shows. (I still remember meeting Mr. Rosenberg on the occasion of my first visit to an American dog show, the Chicago International KC in 1967. I didn't know much then, of course, but even I had heard of Mr. Rosenberg and was very impressed.) 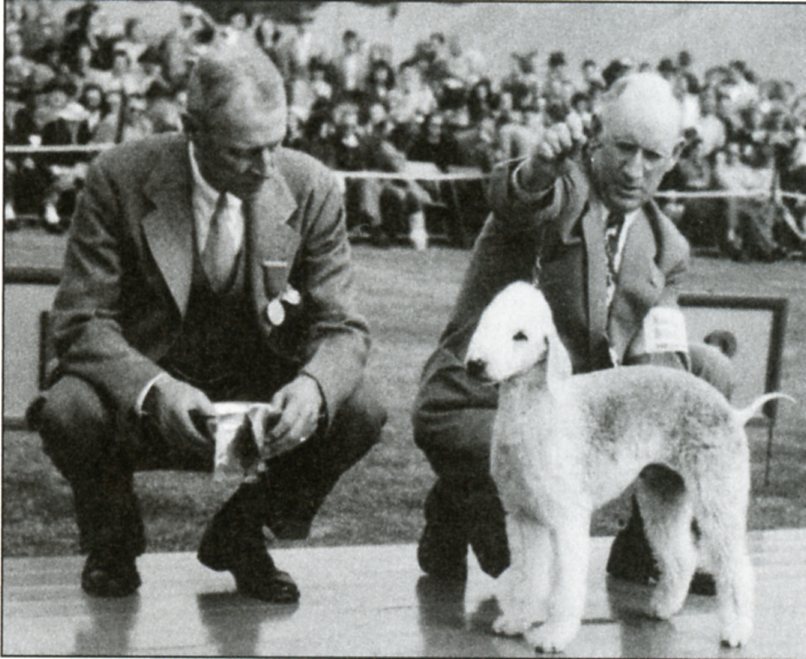 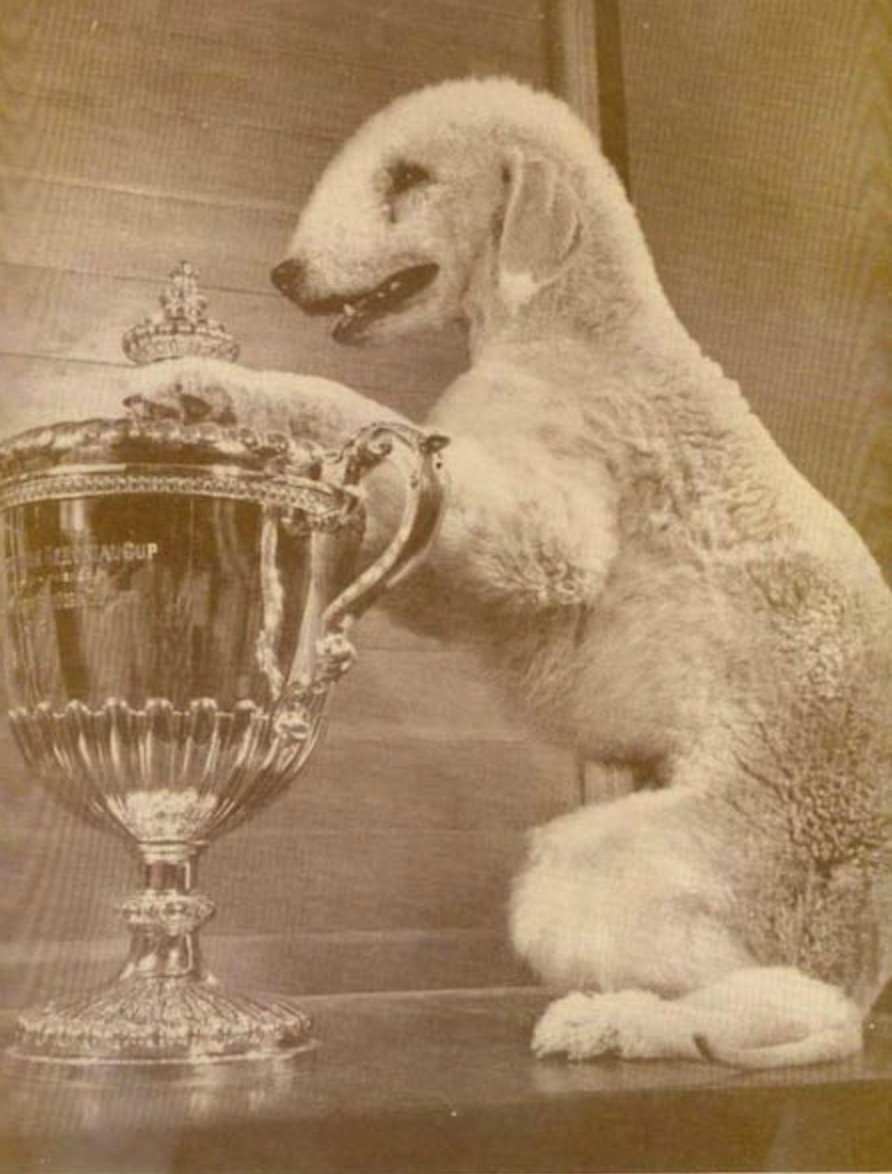 One reason that Timmie is not as well remembered as some others may be that his show career was very limited. He was shown a total of 23 times, was Best of Breed every time, won nine groups and placed in the Terrier Group every time except once. He won a total of seven Best in Shows, which was not a huge number for an all-time great even in those days. There were fewer shows then than there are today: In 1949 there were 339 AKC all-breed shows, while in 2018, the most recent year for which AKC figures are available, there were 1,653 AKC all-breed shows. However, even then dogs were often specialed for several years in a row and sometimes managed to rack up amazing records. (Nornay Saddler won 56 BIS and was a few years older than Timmie; both Bang Away and Colonel won their 100th BIS in 1954.) Obviously, however, Timmie had what it takes to win at the most important shows.

As a stud dog, Timmie's activities were also limited, but he nevertheless sired 36 AKC champions and according to the Bedlington Terrier Club of America “can be found in most American pedigrees, touching almost every kennel in the U.S.”

How good was Ch. Rock Ridge's Night Rocket? Was he worthy of his big wins? Certainly it did not hurt that he was conditioned and handled by Anthony Neary, who was totally dedicated to the breed. Nor did the support, financial and otherwise, of William Rockefeller hurt. But Timmie wouldn't have won such important shows as he did under such respected judges without having outstanding qualities; neither would he have been used by so many different breeders or sired so many champions. 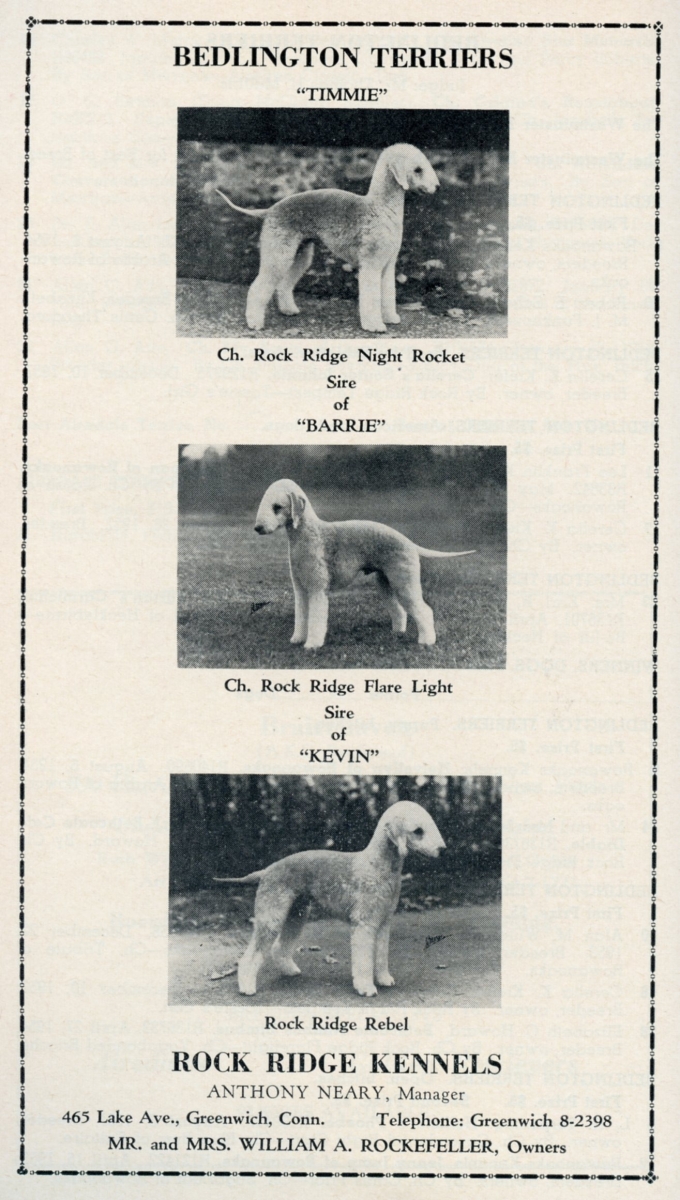 The Rock Ridge success story continued through the end of the 1940s, the 1950s and at least the first half of the 1960s. In the 1946 Westminster catalog Mr. and Mrs. William A. Rockefeller are listed as owners of seven Bedlington Terriers, including three Rock Ridge champions. In 1955 the WKC catalog had a full-page ad near the Bedlington pages from Rock Ridge, but no dogs from the kennel were shown. In the huge breed entry at Morris & Essex in 1957, the last show held until the club's rebirth in 2000, the Rockefellers had again seven Rock Ridge Bedlington Terriers entered, including five champions, all with Anthony Neary listed as the agent.

William Rockefeller and the Nearys were an “unbeatable combination,” according to Muriel Lee's book, and they finished numerous champions. Mr. Rockefeller was president of the Bedlington Terrier Club of America in 1949-1950, and later also president of Westminster Kennel Club, a position he held for many years. He was also chairman of the board for the American Kennel Club from 1975 to 1984. He was also president of the American Society of Prevention of Cruelty to Animals and held a number of positions in non-doggy organizations as well.

This was long after the Nearys had retired, however, and the Rock Ridge Bedlington Terrier kennel had closed its doors forever.

© Dog News. This article may not be reposted, reprinted, rewritten, excerpted or otherwise duplicated in any medium without the express written permission of the publisher.
Thu, 09/30/2021 - 2:33pm