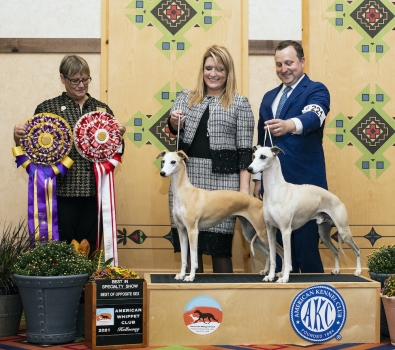 The first American Whippet Club National Specialty was held in April 1981, and it has been held every year since then — except  the last two years. Due to the pandemic, no national at all was held last year, and this year's specialty was moved to the fall, October 2-9. It took place at the Hilton Buffalo Thunder Resort and Casino in Santa Fe, New Mexico — a giant, attractive and very modern hotel that somehow managed to swallow up all the Whippet people and dogs so effectively that they did not overwhelm the public spaces downstairs in the manner we've become used to. Only a few of the other guests and the very polite staff asked what WAS going on with “those skinny dogs,” and some even came to the ballroom to watch the judging. But getting there from the guest rooms usually involved a LOT of walking …

There was a total entry of 452 Whippets making 602 entries — not a record for the breed by any means, but still an impressive figure, especially so far out West: Isn't it true of most breeds that exhibitors in the East won't travel to Western shows, but West Coast dog people will travel East? (One of the Eastern exhibitors who makes an exception of this was Phoebe Booth, who drove with her dogs more than 2,100 miles and 30 hours from her home in Massachusetts.) The enthusiasm that was generated by people being able to get together for a National for the first time in two and a half years was palpable: It was wonderful to just sit at ringside, catalog in hand, and watch dogs you had perhaps only heard of.  This was only counteracted slightly by a natural caution about contamination, or the entry would probably have been even larger. The mask requirement was stringently upheld by both the hotel and the club: Judges, handlers and spectators covered mouths and noses at all times indoors and in public.

The AWC National Specialty is much more than “just another big show.” Almost everything that Whippets can do, and that's a lot, can find some outlet during the show and explains why it takes all of eight days. There was lure coursing, both ASFA and AKC, in a field not too far from the hotel; there was obedience, rally and triathlon; there were well-attended health clinics — 50-plus dogs were tested for hearing (BAER), 86 for vision (OFA) and 110 for hearts (echocardiogram), although results of all these tests were not immediately available. There was Canine Good Citizen and Trick Dog testing, a Parade of Rescues and a Parade of Honors, judges' education and the annual club meeting. And that's only part of all that went on …

The Futurity classes were judged by Jeanne Lambertsen, of the Watch Me prefix, and won by Ch. Tivio's Some Like It Hot. The Maturity judge was Mary Dukes, past breeder under the Delacreme prefix and a successful professional handler, now employed by AKC; her winner was GCh. Northwind's Sinsational at In Vogue. The Veteran Sweepstakes classes were judged by Harriet Vincent, Cottonwood, who found her winner in the more than 12 year old — but sensational-looking — top sire, GCh. Ableaim Patent Pending, MC, CGC, TKN.  Breeder Sweepstakes were judged by Cindy Hatcher, Raybar, and won by the not yet 12-month-old Runner's He's A Cave Man, defeating a large number of mature champions to win this award.

There were 18 entries in Stud Dog and 19 in the Brood Bitch class, judged by Joe Buchanan, with GCh. Laurel Double or Nothing (sire of WD) winning the former and Ch. Snow Hill In The Pocket the latter. Joe also officiated for the Extended Generation, Brace and Altered classes, while Dr. David Waterhouse judged Junior Showmanship, with the win going to Mandy Clevenger's daughter Angelina Molinari.

The Top 20 competition was as glitzy as ever, but for obvious reasons had more competitors than usual, with wins for both 2019 and 2020 being awarded. The former went to GCh. Sporting Fields Love and Shenanigans, a BIS winner and No. 2 Whippet for two years, with the 2020 win going to GCh. O'Neills Intuition at Morado, FCh, SC. She was  just six months old when I saw her winning the Futurity at the 2018 AWC National; she has also won Sweepstakes and RBIS at an all-breed show. (Her first-time Whippet owner and handler wrote in the Top 20 catalog, “I can only imagine how far [she] could go with a more talented handler, but I wouldn't trade the adventures we've had for the world.”) This bitch also won the “People's Choice” award that is based on ringside votes. Master of Ceremonies was Joe Buchanan, Group judge was Kalen M. Dumke Voogt (Nonsuch), breeder-judge Kay Nierengarten (Northwind) and handler-judge Cheslie Pickett Smithey (Pinnacle). 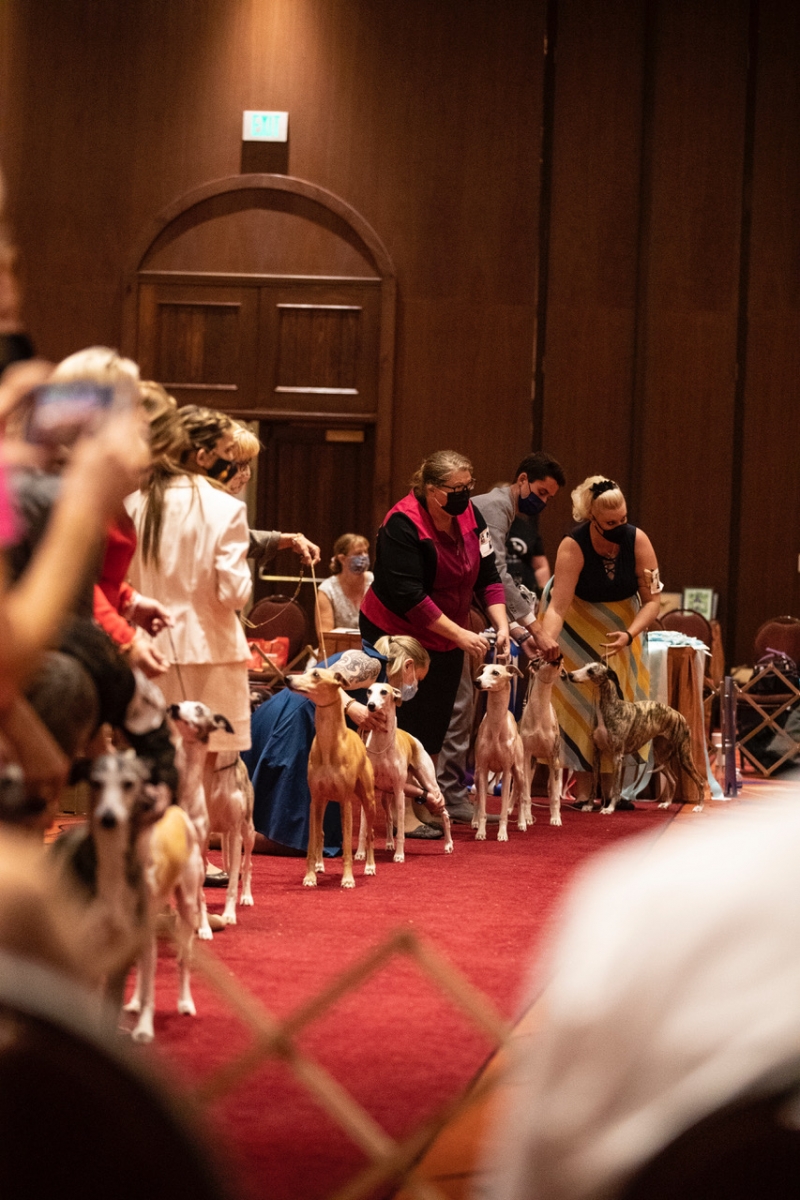 The final line-up for BOB. The dog at the end is WB and BOW, Northwind’s N Hats Off Isles of the Blessed. Photo Katie Rudolph.

All the regular classes were judged during four days by Donna Lynch of the Hamrya prefix. She is one of those AKC judges who remains approved for just a single breed but also judges Coursing Ability Tests. She awarded Winners dog from the 77 class males entered to the eight-month-old Upper Mountain Crazy Town V Devlynn, who came from the Bred-By Exhibitor class. He is owned and was bred by Devon Kipp, Jeffrey Winton and Jim Modica, and handled by Devon. Reserve Winners was the Open Dog: Abbey's Wild About Harry, just over a year old, owned by Jane Cooney Waterhouse and her mother Shirley Cooney, bred by Shirley in partnership with Shaun Cooney and handled by Justin Smithey. The 122 class bitches were headed by the Open class winner, Northwind N Hats Off Isles of the Blessed, owned by Darcey Hopkins and the breeder, Kay Nierengarten. (She was, I think, handled by her owner.) Reserve came from the Bred-By Exhibitor class in the shape of a just 6-month-old puppy at her very first show: Sporting Fields Dashing Desert Dove, owned by Russell L. McFadden, bred by Dionne Butt, Amanda Giles and David and Gina Samuelson, handled by David.

The real highlight of the show for most spectators was the Best of Breed class that had 113 Whippets entered, minus absentees, plus move-ups, Winners Dog, Winners Bitch and additional class winners: six Veterans (three classes for each sex: 7-10 years, 10-12 years and 12 years and over) and the winners of the Lure Coursing and Racing classes that are a regular feature of these shows. It was an impressive sight, and Donna Lynch had to make several cuts to whittle it down to her final winners. In the end they turned out to be the brother and sister pair that have dominated the Whippet rings for several years: BOB was GCh. Pinnacle Kentucky Bourbon and BOS her litter brother GCh. Pinnacle Tennessee Whiskey. They should both be too well known to need further introduction, but I'll mention some highlights of their careers anyway. Bourbon is the top-winning Whippet in U.S. breed history and has been the No. 1 Whippet for the past two years. She won her first BIS in late 2018 after a series of specialty BIS, some from the classes, and won all her other 107 all-breed BIS wins during 2019 and 2020, ending up as No. 3 and No. 2, respectively, of all breeds these years. Bourbon now has won 17 Specialty BIS, a breed record, one of them at the 2018 AWC National Specialty. (She needs one more BOB at the AWC National to equal the triple wins that Ch. Brushwood's Moxi of Endeavor took in 2004, 2006 and — at almost nine years of age — in 2011.) Whiskey was No. 1 Whippet for the two years before Bourbon, won the 2017 National Specialty and was Top Hound — among the Top 10 of all breeds — in 2018. Both Bourbon and Whiskey have won BIS at the AKC National Championship in Florida. They were born on September 2, 2015,  sired by Ch. Bo-Bett's Lord of the Rings out of Ch. Sowagla Appraxin Patchouli and co-bred by Justin Smithey and Yvonne Sovereign. Justin's wife Cheslie Pickett Smithey handles Bourbon, who is owned by Ken Latimer, Judy Descutner, Nancy Shaw and the Smitheys. Whiskey is handled by Justin and owned by Ken Latimer with Justin and Cheslie.

The Select award in dogs went to the Canadian-born GCh. Pride of Forgetmenot, seven and a half years old and also Best Veteran and NOHS Best of Breed. He is owned by Karen Schoenrock and was bred by Joanne Boudreault. The same award in bitches went to the multiple SBIS winner GCh. Summit Stripe A Pose, SC, handled by breeder Susan Vernon and co-owned by Laura Taylor and the breeder. Best Puppy was Kalina Ableaim Rare Vintage, owned and bred by Cydney Petit and Gail Boyd; she was also, in spite of her tender age, High Scoring in Obedience Trial. The even younger Sporting Fields Dashing Desert Dove was not entered in the Puppy class, so had to be content with winning Best Bred-By Exhibitor in Show. (I notice incidentally that she's sired by the 2019 AWC National Specialty BOB, GCh. Sporting Fields Dashing Sand Dune, out of that year's BOS and Top 20 winner GCh. Sporting Fields Love and Shenanigans.) Best Performance Dog was GCh. & Dual Ch. Surrey Hill's Padcrasher of Mariner, SC, DCAT, owned by Karen Lee and co-bred by her with Kristen Fredericks.

An Awards Banquet concluded the eight days of Whippet activities. Among much else, the year's Registers of Merit certificates were awarded, including a much-delayed ROMXX award to Ch. Saxon Shore Amber Waves, born in 1981! Karen Lee was given a well-deserved, very popular AKC Sportsmanship award, and Patience Renzulli gave out the Willow Award to the Therapy Dog of the year.

And then it was time to drive back to California. It took two days, but it was worth it. There was no time for proper sightseeing in Santa Fe as planned, but due to congestion on the freeway we had to take a detour of a couple of hours that took us through the deserted badlands (Malpais) of New Mexico via the breathtaking views of Salt River Canyon (“better than the Grand Canyon” — or at least more unexpected, in this case), with the road taking impossible hairpin turns at the edge of the canyon … Did you know there's actually a small town in Navajo County on the Mogollan Rim called Show Low, elevation 6,345 feet? And a national forest named Tonto, which is one of the largest in the U.S.? We miss a lot just sticking to the freeways when we go to dog shows.

National Event Chair Cindy Scott and Local Event Chair Russell L. McFadden have every reason to be proud of the 2021 event. The 2022 AWC National Specialty will be held in Virginia Beach in April; the date I have is April 4-9, but show chair Kristen Fredericks has not put the exact date on Facebook yet.

© Dog News. This article may not be reposted, reprinted, rewritten, excerpted or otherwise duplicated in any medium without the express written permission of the publisher.
Sat, 10/30/2021 - 7:40pm