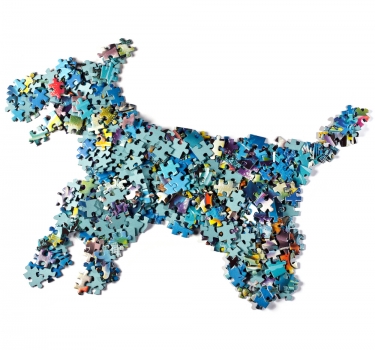 Can Dogs Have Autism?

Can dogs have autism?

In the past decade, there has been increased focus on identifying, diagnosing and treating autism spectrum disorder (ASD) in humans, especially young children. This has more pet owners wondering if this condition can affect their dogs. As we get a better understanding of autism, researchers are starting to explore whether autism is a strictly human diagnosis, or if dogs can be affected as well.

Autism spectrum disorder is defined by the Centers for Disease Control (CDC) as a developmental disability that can cause “significant social, communication and behavioral challenges.” According to the CDC, one in 54 children in the United States is on the autism spectrum.

Signs of ASD usually begin during early childhood, and a definitive diagnosis can be made by two years of age. For many people with ASD, diagnosis doesn’t occur until later in life, sometimes even into adulthood.

There are currently no blood or medical tests that can detect ASD. The exact cause is unknown. It is diagnosed after careful behavioral screening by qualified medical professionals.

Some of the behaviors associated with ASD in humans include avoiding eye contact and physical contact, difficulty relating to others and an inability to understand other people’s emotions. Other behaviors are repeating words or phrases, obsessive and/or compulsive interests, and getting easily upset with changes in routine and the environment.

Parents may notice delayed language, movement and learning skills. Body rocking and spinning in circles are sometimes accompanied by hyperactivity, impulsivity and inattention. Unusual sleep or eating habits may be a sign of ASD.

Do dogs show these behaviors?

Studies suggest that dogs with this disorder lack certain neurons in their brain that are thought to help them learn normal social behavior. These neurons are called “mirror” neurons, as they help puppies and young dogs imitate the behaviors of older dogs in social situations. Without mirror neurons, a dog is unable to develop these social skills, similar to a person with ASD.

Recently, the American College of Veterinary Behaviorists presented a study on tail-chasing behavior in Bull Terriers and a possible link to autism. The study observed specific traits of 132 Bull Terriers, 55 of which chased their tails, and 77 which were the non-tail-chasing control group. The study found that tail-chasing was more prevalent in males, and was associated with occasional aggression, explosive episodes and trance-like behaviors. Although not definitive, these results suggested that tail-chasing could represent a form of autism in dogs.

Are there other conditions in dogs that look similar to autism?

There are a few other disorders in dogs that can produce clinical signs similar to autism in people. Dogs that suffer from anxiety can show compulsive behaviors such as chewing or spinning, hypersensitivity to sound and touch, and avoiding play or eye contact.

Tumors or infections of the brain can make dogs have abnormal episodes of staring off or circling. In some cases, these can even result in obsessive chewing behaviors. Dogs with a low thyroid level can be severely lethargic, which can make them seem aloof or lazy.

What are the signs of canine dysfunctional behavior?

Canine dysfunctional behavior does not have a spectrum like human ASD, so veterinarians rely on the comparison of normal versus abnormal behavior guidelines. Dogs that demonstrate compulsive and repetitive behaviors, along with impaired social skills, can lead veterinarians to suspect this diagnosis, although they will rule out other medical conditions before making a conclusive diagnosis.

Clinical signs of CDB include antisocial behavior, obsessive-compulsive behaviors and communication issues. If your dog does not pay attention to you during walks, playtime or feeding time, it may be a sign of CDB. Not all dogs enjoy the company of other dogs, but reluctance to interact at all with member of their own species can also be a sign of CDB.

Obsessive-compulsive behaviors may include circling, tail-chasing, flank-sucking, licking, chewing or teeth grinding. These dogs may show pronounced guarding of toys or other inanimate objects. There are even reports of dogs lining up their toys or other objects.

Dogs with suspected CDB may not be able to express their feelings or moods as easily as other dogs. For example, they may not wag their tails when they are happy or put their ears back when they are being reprimanded.

Researchers describe a trance-like state where dogs can “stare off into space” for long periods of time. These dogs may be quieter than other dogs, seem to lack personality, and avoid eye contact with humans and other dogs.

Another possible sign of CDB is inappropriate reaction to stimuli. This could include yelping when being gently touched. They can be hypersensitive to stimuli as benign as gentle head petting, which can lead to pain, aggression or fear.

CDB dogs will often retreat to a familiar, safe space such as a closet or under the bed to avoid new situations or environments. They may be lethargic and lack interest in physical activity. They are often described as “couch potatoes” even if they are considered a high-energy breed.

Is there treatment for CDB?

There is no single treatment for canine dysfunctional behavior. After ruling out other possible medical conditions, and a diagnosis of CDB is made, your veterinarian may recommend some of the following therapies.

Certain medications can provide relief for compulsive disorders. Behavior-modification medications, such as fluoxetine (Prozac), amitriptyline (Elavil), buspirone (BuSpar) or clomipramine (Clomicalm) may be helpful. CBD and trazodone are calming medications that can help with aggressive behaviors.

It is important to provide a safe, comfortable, quiet place for these dogs, as they can be upset by noises, sudden movements and even touch. It is best to avoid busy streets and dog parks if your dog shows signs of anxiety in these situations.

Consistent, routine exercise can help reduce stress while keeping your dog’s mind occupied. This can also decrease the need for repetitive compulsive behaviors.

What should I do if I see signs that look like autism in my dog?

If you are concerned that your dog is showing signs of canine dysfunctional behavior, contact your veterinarian to schedule a thorough physical examination. Diagnostic testing may be discussed, as well as a referral to a board-certified veterinary behaviorist.

Your veterinarian will work with you to determine your dog’s triggers that can cause negative behavioral reactions. Other techniques, such as pressure wraps — for example, ThunderShirts — can provide reassuring support to an anxious dog’s body. Calming treats and pheromones are available.

By placing notes on the front door to request people not ring the doorbell, you will eliminate a powerful triggering situation. You can create low-stress areas around your home with low-sensory impact. These should be located in quiet areas of the house with low lighting and comfortable beds for lounging.

© Dog News. This article may not be reposted, reprinted, rewritten, excerpted or otherwise duplicated in any medium without the express written permission of the publisher.
Fri, 01/13/2023 - 11:26pm