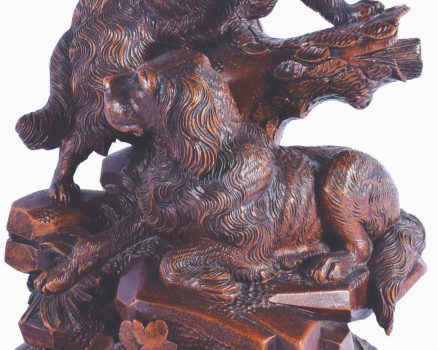 Years ago – more than I care to remember – when I started visiting antique fairs and collectors markets looking for anything “doggy,” I was constantly seeing crudely carved small wooden St. Bernards with barrels attached to collars around their necks.

Most would have been bought as cheap mementoes of visits to Switzerland, a country that has been a haven for tourists and travellers since the early 19th Century. Little did I realize just how beautiful and intricate some of these carvings could be, and the craftsmanship and skill that were needed to create them.

Universally referred to as “Black Forest,” virtually all these carvings were done in Switzerland. The tradition goes back to 1816, when a man named Christian Fischer hit upon the idea of making simple wooden objects specifically for tourists, which he sold by the Giessbach Falls, an attraction close to Brienz. By the end of the century it had become the major industry in Brienz and the neighboring towns and villages, with an estimated 2,000 carvers working in the area.

By the middle years of the century, what had started out as simply “folk art” had been developed by some of the more skilled carvers into an art form of great merit. The so-called “carving king” was Johann Huggler, whose signed work is most sought after by collectors. However, the auction record for a Black Forest carving was taken by an eagle carved by Alfred Stahli, which took £36,000 at Sotheby’s in 2007.

The most outstanding pieces were exhibited alongside Tiffany, Galle and other great institutions of the time at the great exhibitions – London in 1851, Philadelphia in 1876, Chicago in 1893 and Paris in 1900.

The mountain regions of Switzerland became some of the most popular destinations in Europe for tourists, with virtually every tourist picking up a few of the carvings to take home as souvenirs. Queen Victoria was among them, no doubt buying some of the better pieces for the Royal Collection. She spent a month-long holiday at Lucerne in 1868, during which she reached the summit of Rigi Kulm, the highest peak of Mount Rigi. She headed a procession of ponies negotiating a path up the mountain, riding side-saddle with a parasol above her head and her mount led by her Scottish manservant John Brown, his kilt swishing above his knees. At the summit she found souvenir stalls on a special platform.

Linden, pear, maple and walnut were the trees most favored for carving, preferably ones that had grown in the shade and harvested in winter, when the trees were in a dormant state. Reputedly, the Brienz School of Woodcarving maintained a private zoo on site in order for students to be able to study the animals’ anatomical details close up. At the time the town had a population of 2,400, of whom some 600 persons were employed as woodcarvers.

Wildlife, particularly synonymous with the forested mountain region, were subjects of choice: bears, owls, eagles, wild boar and game birds. Many of the animals have carved eyes, while others have glass eyes. Dogs were also a very popular subject, particularly the Swiss national breed, the St. Bernard. It had a long association with the country, thanks largely to the Great St. Bernard Hospice that stands at over 8,000 feet on the high mountain pass, which has been home to the breed for countless generation. 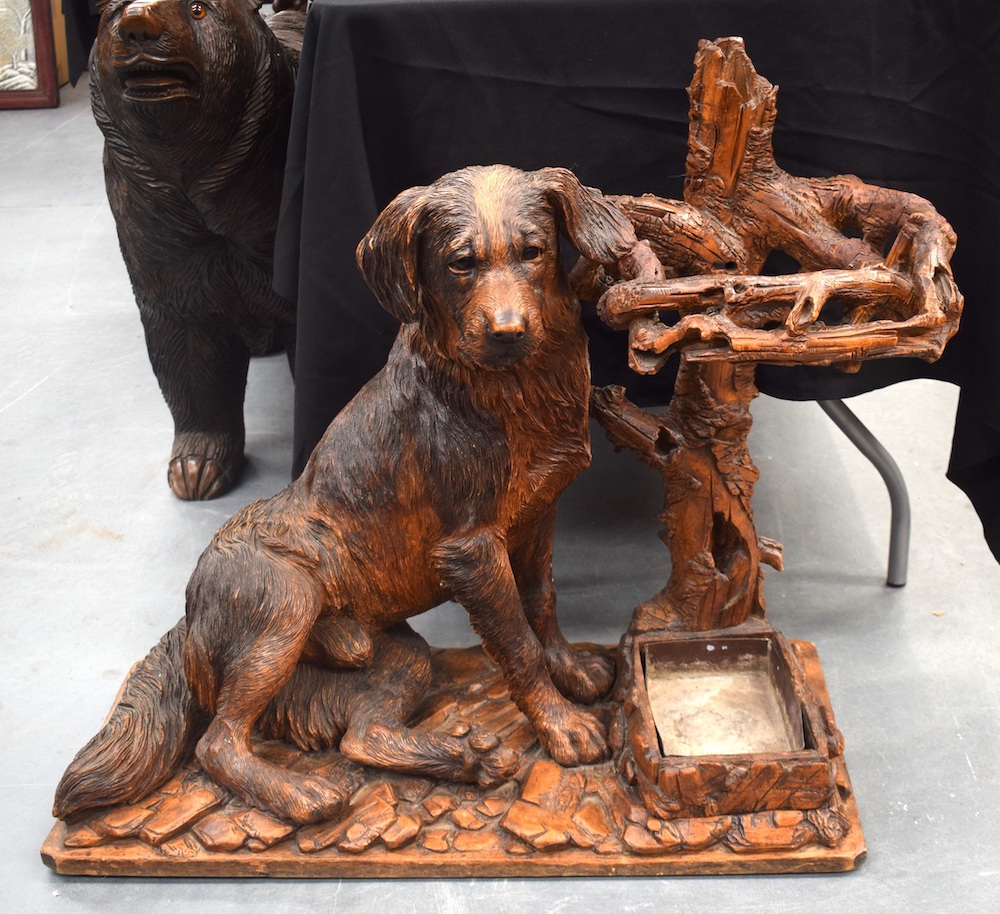 Hannams Auctioneers have been dispersing two private collections, and the demand was strong. Leading the field was a beautifully carved maple stick stand (above), circa 1890, in the manner of Walter Mäder and his son Heinrich, master carvers, who specialized in detailed carvings of St. Bernards. The near life-size dog sat on a naturalistic base beside a gnarled tree that served as the stand. Estimated at £2,000-3,000 it found a new home for £14,000. 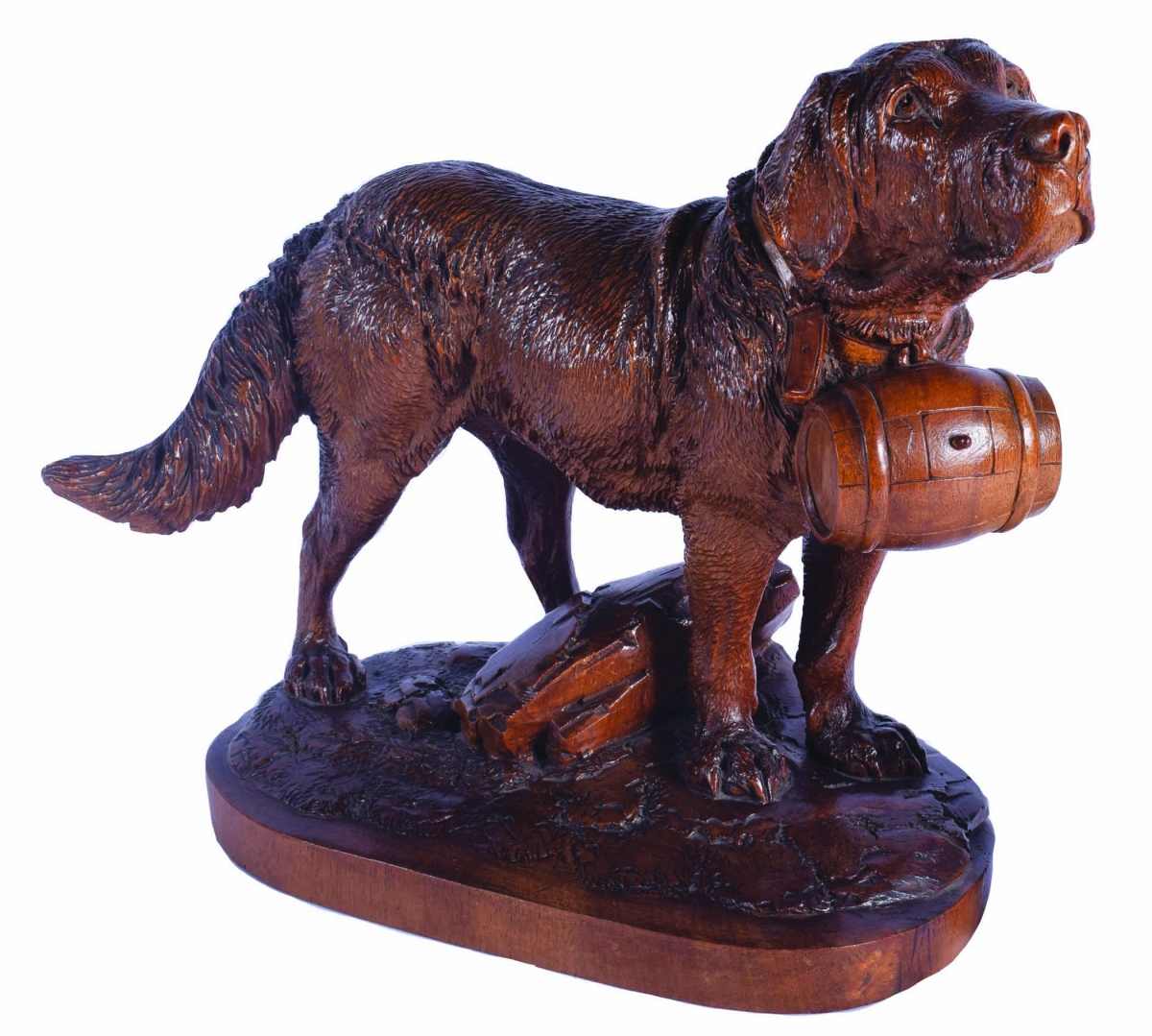 A fine large 19th-Century St. Bernard on an oval base, barrel around its neck and blanket on the ground, was the epitome of everything St. Bernard enthusiasts look for in a Black Forest carving. It sold above top estimate for £1,700. 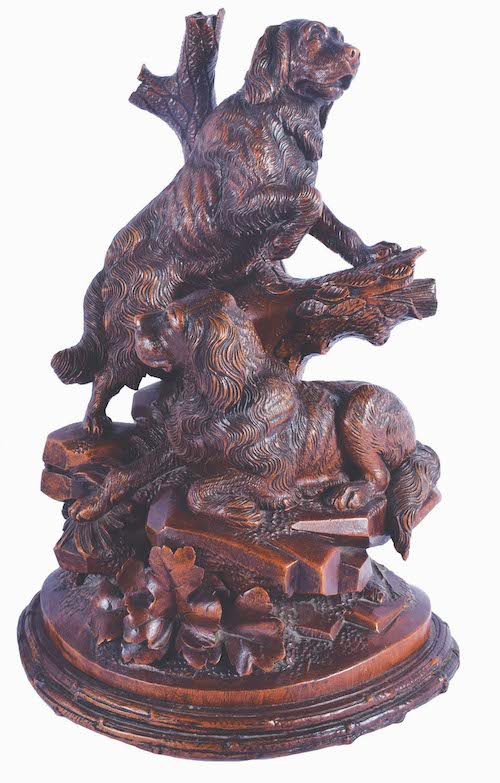 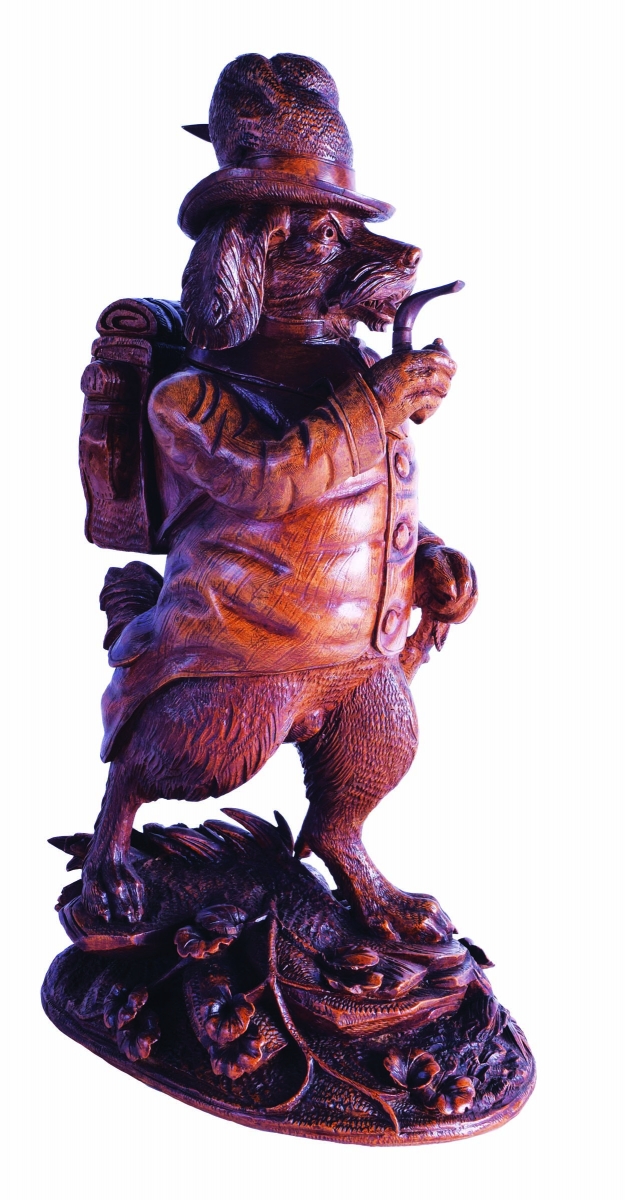 Quality and fine detailed carving are key to success. Against a maximum estimate of £3,000 a moustachioed dog modelled as a mountain walker holding a pipe, his head and back pouch both opening to reveal interiors for tobacco (above), sold for £9,000. It was thought to be one of only two known examples. 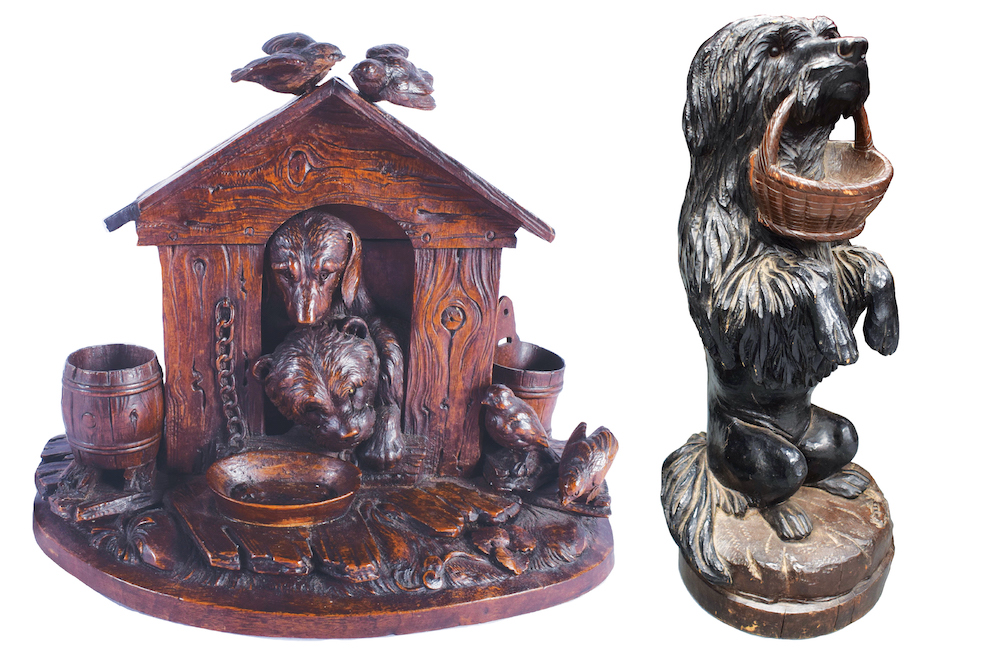 A 19th-Century egg-box holder modelled with two dogs (at first glance, at least!) in a kennel and with small birds on the base and roof (above left) sold for £880 against an estimate of £200-300. Selling at the top end of estimate for £800 was a 19th-Century begging dog holding a basket (above right). Begging dogs, designed to appeal to sentimental Victorian tastes, were made in a great variety of materials. 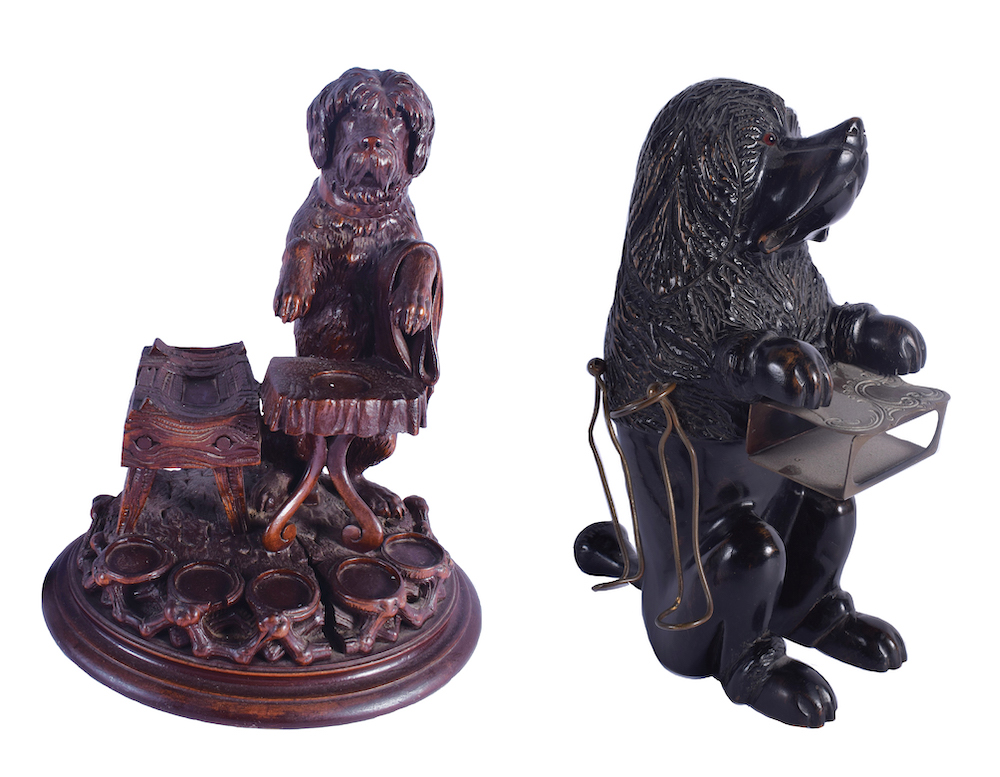 A rare carving was a 19th-Century begging-dog drinks holder, the dog standing beside a stool, which realized £1,300 against a top estimate of £500 (above left). Not so successful, selling below estimate for a mere £60, was a begging-dog smokers’ companion (above right). However, it lacked much of the fine detailed carving seen in the better pieces. Popular in Europe circa 1900, smokers’ companions had compartments for cigars, cigarettes, matches, ashtrays and burnt matches.

Black Forest carvings feature a number of utilitarian items – clocks, inkwells, lamps, even large pieces of furniture like the full-sized table with a St. Bernard on one end standing on its hind legs and resting its front paws on the tabletop that auction house Mellors sold in 2014 for £17,000 (below). 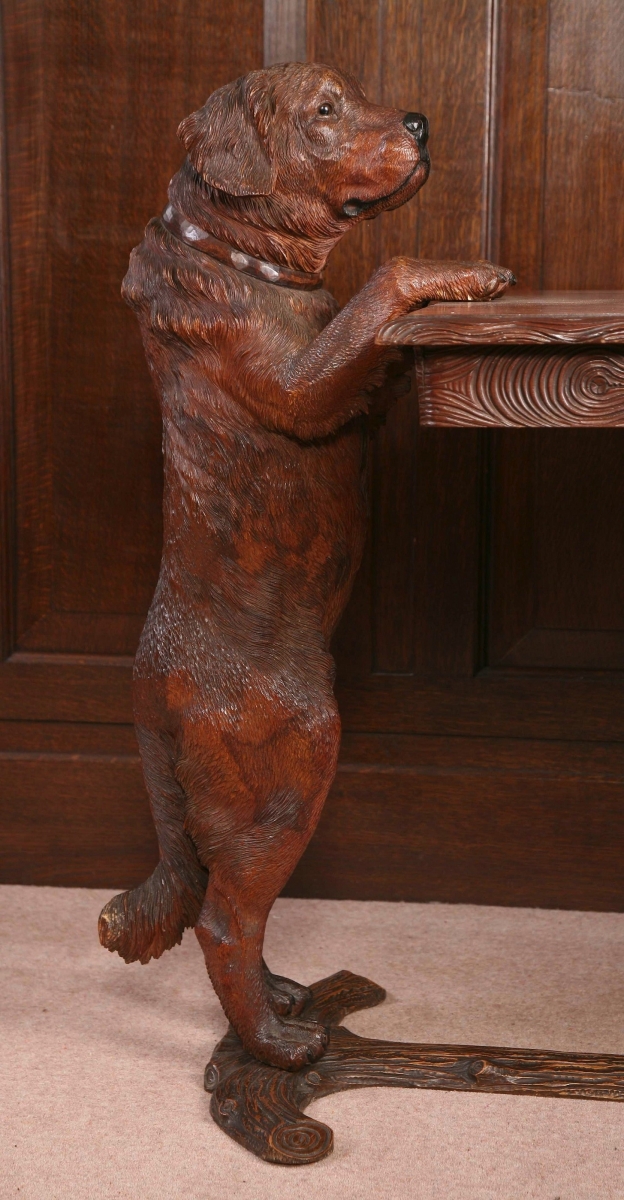 © Dog News. This article may not be reposted, reprinted, rewritten, excerpted or otherwise duplicated in any medium without the express written permission of the publisher.
Fri, 10/09/2020 - 9:55am