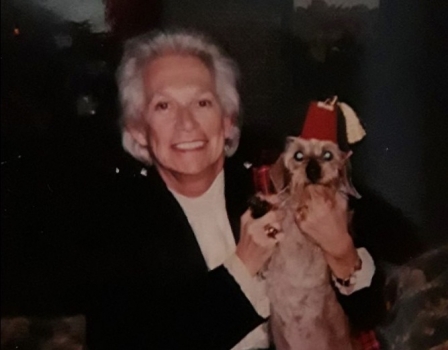 In the Name of Love

World-renowned archeologist and equally famous Dachshund breeder and fancier Iris Love passed away recently in New York City. She was 87.

In a sport filled with larger-than-life figures, Love moved in circles almost as rarified as the ancient gods and goddesses to whose study she devoted her life.

In her 30s, she became a household name among archeologists, finding the long-lost Temple of Aphrodite on the Turkish island of Knidos on the same day in 1969 that astronaut Neil Armstrong took his first steps on the moon.

Love’s involvement in the dog world reached equally lofty heights in 2010 and 2012, when the Pekingese she co-owned, Ch. Palacegarden Malachy, was piloted by David Fitzpatrick to Best in Show at Morris & Essex and Westminster, respectively. Love was also the co-owner of the nation’s current number-one dog, the young Peke Ch. Pequest Wasabi, who won the AKC National Championship in December from the classes.

Born during the Depression into enviable wealth – her father was a descendent of British explorer Captain James Cook and American founding father Alexander Hamilton, while her mother’s pedigree led back to the Guggenheims – Love knew everyone who was anyone, from rock star Mick Jagger to fellow heiress Brooke Astor to pop artist Andy Warhol, who mentioned her in his diaries no fewer than nine times. Love’s Dachshund-studded soirees at Central Park’s Tavern on the Green with longtime romantic partner and gossip columnist Liz Smith were the must-have invite during Westminster week for many years.

Love grew up with dogs, including a dozen Skye Terriers, as her father’s family came from that blustery Scottish isle. When her mother adopted a Dachshund that the family named Baron Heinrich Schultz von Kraut, Love told an interviewer that she could not understand why “Mummy” was so taken with such a “strange-looking” and “from an engineering standpoint … almost impossible” breed. But once Love met the four-legged Baron, “it took exactly twenty minutes for [him] to totally enchant me, and I have been a Dachshund fancier ever since."

Love’s fascination with the palace-guarding Pekingese breed was also understandable, given her upbringing: Her parents, who met on a boat trip to China, filled their Park Avenue home with Asian antiquities, including a table on which Love ate her meals that was fashioned from a screen from Beijing’s imperial Summer Palace.

Like the classical deities that so impassioned her, Love found dogs to be deep reflections of our very human selves.

“I think that dogs can be our spiritual guides in this life,” she told The New York Times in 2012. “Of all the animals in the world, they became the companions of man. They teach us about love.”

© Dog News. This article may not be reposted, reprinted, rewritten, excerpted or otherwise duplicated in any medium without the express written permission of the publisher.
Fri, 04/17/2020 - 7:43pm