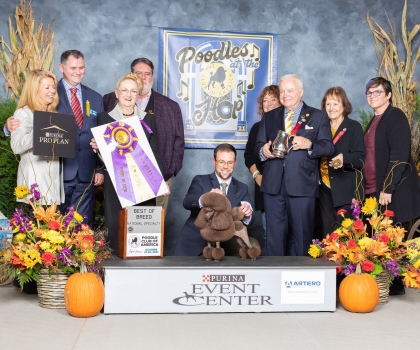 Each year I count the days until I go to the Poodle Club of America, which this year was held October 28 through 30. My first memories of PCA date back to the early ’60s, when it was held at the famous Garden City Hotel on Long Island.  It was a one-day show and held on a Friday, the third week of May, the day before the Ladies Kennel Association.

The last PCA show at the Garden City Hotel was held in 1967, after it had been there since 1946. After several changes of outdoor locations, it moved to an indoor facility in Upper Marlboro, Maryland, in 1995. Then in 2004 it relocated to Salisbury, Maryland. And just a couple of years ago, it moved to the Purina Event Center in Missouri. The main reason for the move was to be more centrally located for all the people driving. Many thought it would not work as well as Salisbury, but the first year nearly everyone liked the new venue.

This year I was not as excited about attending as I have been in the past. My main reason was I could not be there on Saturday, when the three varieties would have the B.O.V. competition. I had to travel on Saturday to judge the Bull Terrier National on Sunday.

But once I arrived at the venue on Wednesday, my usual excitement kicked in. Yes, I was sad I would not be there to see the finals, but I would see the class dogs and bitches. Most of the specials I have seen before, and the class animals are the future of the breed.

Normally, many, many puppies make their debut in the puppy classes at PCA. This time was very different, as there was no show in 2020 and this year’s show was held at the end of October instead of mid-April. It had been more than a year and a half since the last PCA, and there were a lot of dogs making their first appearance as mature adults. Some of them had been cut down while waiting for PCA.

With the entry being somewhat smaller this year, judging did not have to start until 10 a.m. on Thursday. Friday started at 10:30 a.m., and Saturday at 9:30 a.m. Having a smaller entry allowed for the class judging of dogs and bitches not to overlap as much as in previous years.

Travel restrictions hurt the Toy entry quite a bit. Normally we have at least six Toys from Japan, four or five from Korea, and some from Colombia, England and Europe. The date had been pushed back until the end of October in the hopes that the travel ban would have been over by then.

Most people not staying on the grounds try to stay at the Wildwood Hotel in Wildwood. It is a very nice, very dog-friendly hotel that appreciates all the business the different shows bring. There used to be a really excellent eatery across the street, but the owner closed the large restaurant so she could devote herself full time to her catering business. We all miss the great restaurant, which is now a wine bar. Luckily, there is a wonderful Italian restaurant just down the street from the hotel. They had enough help to run at full capacity, but everything took much longer, including getting drinks from the bar. One evening the operator of the pizza oven did not show up, so there was no pizza, which is a favorite there. Also, one night no veal was available. Nearby is a good Thai place, and a new Italian opened recently.

The decorations for the rings were more impressive than ever. Being so close to Halloween, pumpkins were a major part of the décor. Wednesday afternoon a very large crew spent hours and hours setting up all the arrangements. PCA is always one of the most spectacular shows anywhere in the world. The Event Center will not allow real turf, so PCA bought artificial turf for the rings, which has to be stored between shows.

PCA is a very expensive show to put on, and a great deal of money has to be raised to put on such a spectacular event. One afternoon after judging, the prime grooming spaces are auctioned off. The prime RV spots are also auctioned. Having a premium grooming spot, one can watch the judging while grooming. Otherwise, you are grooming in a different room close by.

The Purina Event Center is used for more than just dog shows. This makes getting available dates very difficult, especially in the spring and fall, when most nationals are held. The venue really works great for PCA. More nationals would use it if it was larger and had a hotel on site. For example, the Great Dane club will only use a venue with a hotel. The Golden Retriever club needs a larger venue.

Thursday morning everyone was charged up for the start of the show. Daniel Augustus had to replace Edd Bivin for Standards. Right away, starting at 10 a.m., we saw some nice puppies that will be the future of Standards. Randy Garren only had 13 Toy males and did not start until 11 a.m. in ring two. Half an hour later, Dana Plonkey started the Mini males. Even though Randy only had 13 males, the depth of quality was very strong. The strength in Miniature males was also especially strong. The Winners and Reserves in all three varieties will have promising futures ahead of them. The RWD in Standards from the Bred-By class finished; he started by winning the 4 to 6 Month class in 2019.

Friday was filled with wonderful bitches in all three varieties. Adriano Rocha was Winners Bitch in Standards with a Black bitch he bought from Ilaria Biondi de Ciabatti of Peru. The Reserve bitch was a Dawin/Huffish 12 to 18. The Dawin kennel of Linda Campbell had also gone Winners Dog.

When Kirk Herrmann walked into the ring with his Brown Bred-By bitch, Parfait Paperbirch Chickpea, she captured everyone’s attention. The Parfait kennel of Kirk and Pat Lorenz has had many top Browns through the years.

Dana Plonkey had to become very excited when David Chavey walked in with his Black Bred-By puppy bitch, Danfour Reignon Briana. Janet Lange and Daniel have set records in Minis. This bitch’s mother won the Non-Sporting Group at Westminster in 2017. Her sire became the first Poodle to win a variety at the AKC show in 2020, in a modified trim. Always nice to see the future stars in the making. 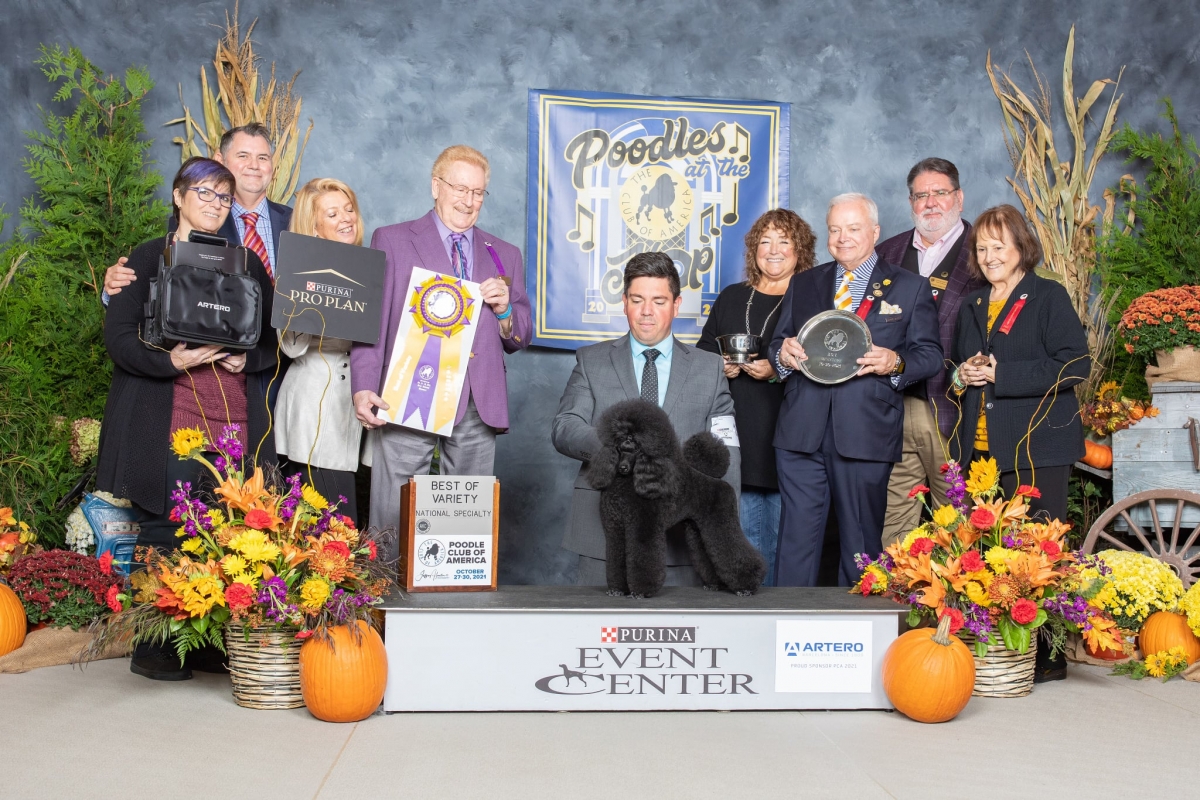 Because I needed to head to Sunday’s Bull Terrier national, I could not be present on Saturday. But I did get to the Roberts Center early enough to see the livestreaming of the BOV class of Standards and then BOB. Nancy Hafner had the great honor of doing BOB. Danny sent her GChG. Stone Run Written in the Skye, the stunning Black bitch that Crystal Murray shows from the same kennel as “Siba,” who went Best at PCA in 2019. It was a line-up of three bitches. Danny had his Mini Bred-By puppy and Kirk had his Bred-By Brown bitch. It was interesting to have two class bitches in the finals. 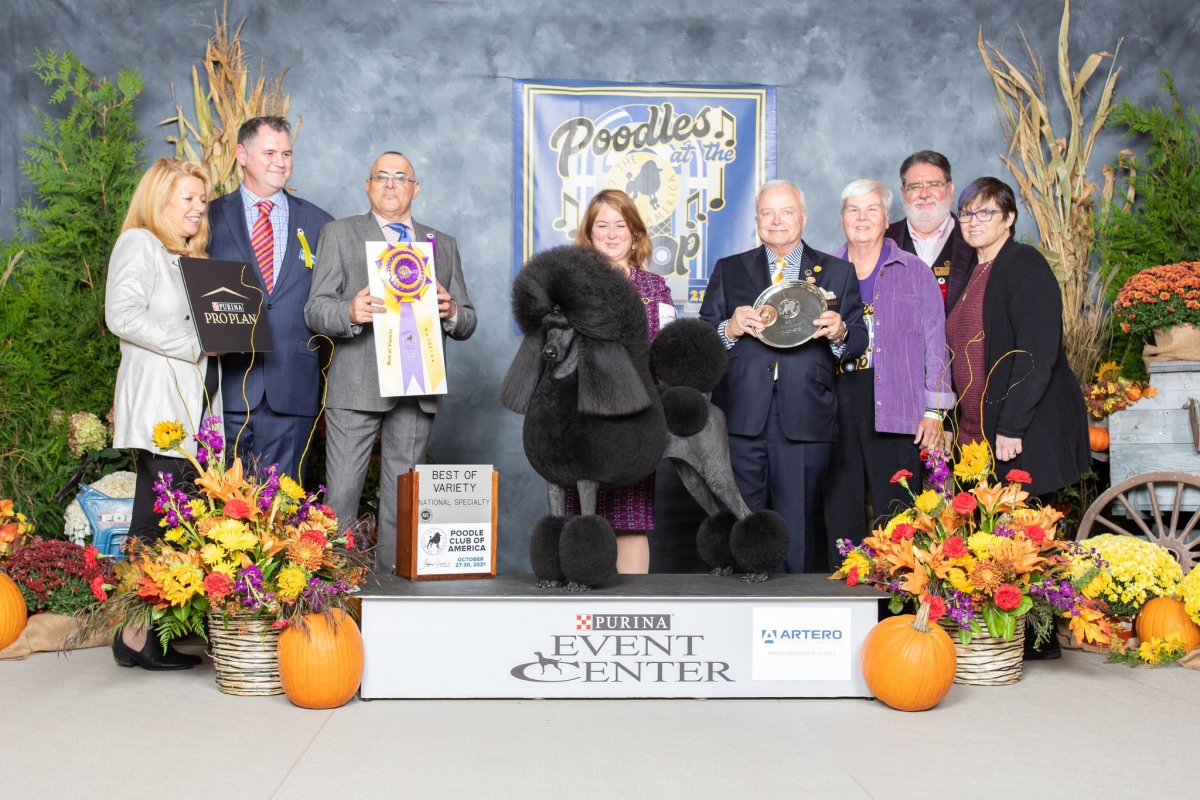 In 2005, history was made when Afterglow The Big Tease became the first one to win the whole show from the classes. Now, 21 years later, Kirk and his Brown bitch repeated that feat. NOS went to the White Standard male GChG. Brighton Benchmark, bred and owned by Anita Carter-Green and Michael Lamb. His handler, Lindsay Gorder, presents him so well. 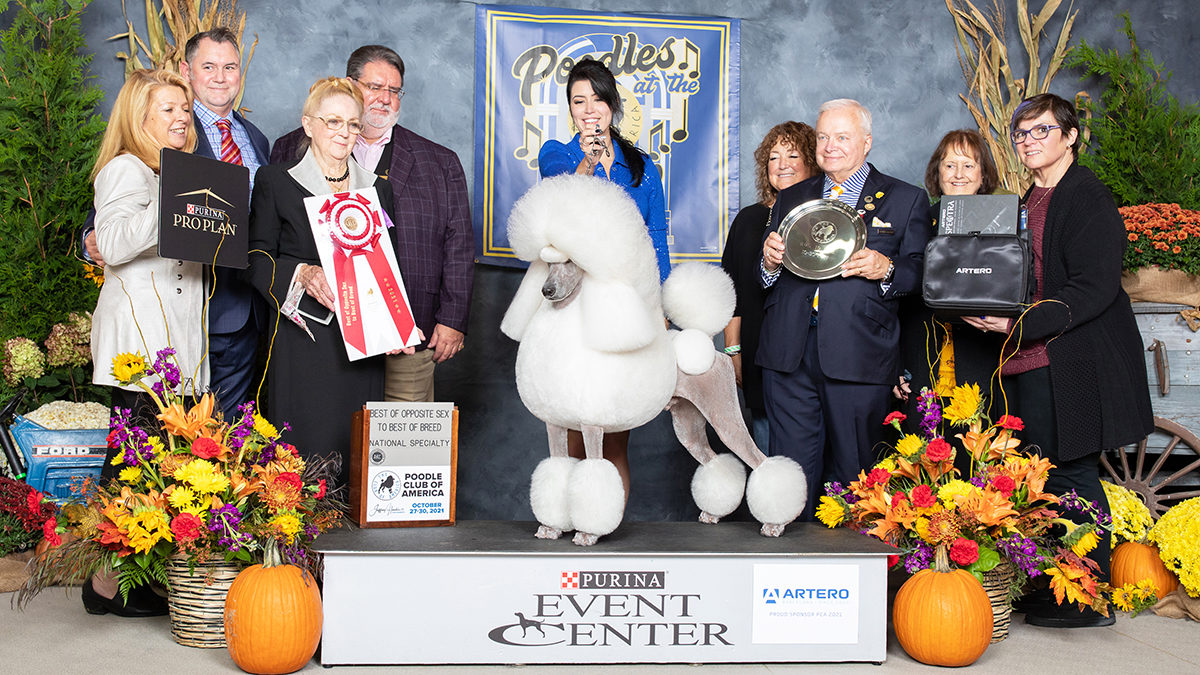 The show turned out to be much more exciting than I had anticipated. It was a shame not to see all of our foreign friends who come each year. But it is only five months until PCA 2022. With travel restrictions now starting to ease, I trust the majority of them will be there in April.

It takes an army to put on a show of this magnitude, but because of Covid this year was even more challenging. This year’s show was dedicated to 18 prominent fanciers who have died since PCA 2019. Fewer and fewer old-timers were present. Having been to around 50 PCAs, I am starting to feel like an old-timer myself.

Keith Burbank was the new show chair this year. He has been a great worker for many years. Michael Knight made the venue look nicer than ever. Keith had a huge committee to make sure every detail was perfect. Gina Wiser has to be singled out for her great work running the auction and raffle to raise large amounts of money for the Juniors.

This was the last year of Dennis McCoy’s term as president due to term limits for board positions. Dennis has brought the show so far forward. He will continue to be a guiding force to the show chair and whoever will be the next president.

© Dog News. This article may not be reposted, reprinted, rewritten, excerpted or otherwise duplicated in any medium without the express written permission of the publisher.
Fri, 11/12/2021 - 4:33pm