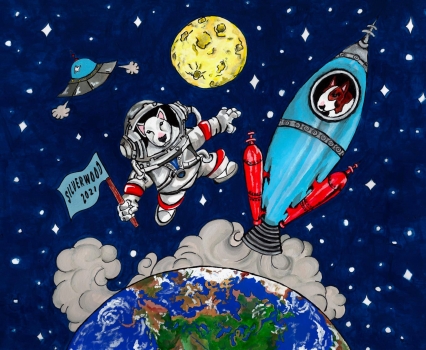 It was designed after the trophy show in England. Not being an AKC event, the judges do not have to be AKC approved. Frequently they are foreign breeders. Once a dog wins Silverwood, it cannot compete there again. The highest honor for any breeder or judge is to be one of the three Silverwood judges.

Silverwood is a Register of Merit, or ROM, show. Throughout the year, there are about 50 ROM shows in different areas of the U.S. and several in Canada. To become a ROM champion, a dog needs to win 10 points, including two three-point shows. At each show the ROM points are based on the size of the entry. The ROM shows can only be judged by invited breeder-judges. There are only three non-breeder-judges who can award ROM points. So the ROM system is unique for any breed.

Each year the ROM weekends and judges have to be approved by the board of directors. Most ROM shows are a three- or four-day weekend, put on by regional clubs. Some are held with all-breed shows, and many are independent shows. It is required for all ROM shows that the judge write a published critique for Winners Dog, Reserve Winners Dog, Winners Bitch, Reserve Winners Bitch, Best of Breed, Best of Opposite Sex and the two Selects. The theory is that the published critiques will help breeders in making breeding decisions in their breeding programs, since they are written by breed authorities.

The Bull Terrier world is very unique in other ways. Each November there is a huge show held in Holland on a Saturday. On Sunday they hold the Country Competition, which is much more prestigious than the Open show. Fifteen to 20 different countries come to Holland with a team. Each country has two males under two, two males over two, two bitches under two, and two bitches over two. Each dog gets scored by three judges. Due to Covid, the U.S. will not be having a team this year. Team USA has done very well in the past. A committee decides which dogs will represent us.

The four-day Silverwood weekend started on Thursday with the Buckeye club holding a specialty. Scott Ibbitson had an entry of 84. On Saturday, Silverwood had 60 entries, and the national on Sunday was judged by myself with 108 entries. It was a great honor for me, since it is thought I am the first non-breeder to judge the national.

The entry of Bull Terriers is usually very small at most all-breed shows. Even Westminster and the AKC National Championship only get a handful of Bull Terriers. Many of the breeder-exhibitors only go to ROM shows. They feel that most non-breeder-judges are not qualified to evaluate their breeding stock. Happy to say we do see some of the newer people who are interested in getting the AKC Grand Championships. I wish more of our top Bull Terriers would show at more all-breed shows. Judges only learn a breed by sorting out classes of quality animals.

There are only roughly 30 ROM judges. Several are rather elderly and no longer taking assignments. The judges can only judge four ROM shows each year. One of the non-breeder judges is only allowed to judge two shows a year. This makes it hard for specialties to get judges who are not over-exposed. Bringing in judges from far distances is also very expensive. A lot of the clubs put a cap on what they can pay. Often for some of the ROM shows, the judges are at times a bit out of pocket.

The mechanisms of Silverwood are complicated, but this is the judging procedure. Hopefully, this explains the process:

The Silverwood Competition is judged by a panel of three judges.

CLASSES – There will be four. Colored Dogs, White Dogs, Colored Bitches and White Bitches. After entries have been received, the Show Chairman will make assignments based on the class size and reference numbers assigned to the judges. Judges 1 and 2 will judge the two largest classes. Judges 1 and 3 will do the third class, and Judges 2 and 3 the fourth. If classes happen to be equal in number then Whites and/or Bitches will be assigned first. Judges 1 and 2 will award the major trophies. In each case the unassigned judge will serve as referee if needed.

CLASS JUDGING – Each judge will examine each entry individually, and then both judges will stand together while each entry is gaited. When this preliminary judging is completed, each judge will submit on their card the number(s) of the entries which they wish to re-examine in the final round of competition. In a class of 21 exhibits or more, the judges will select from two to five entries for the final round of competition. Each judge will list only entries which in their opinion are at the pinnacle of breed development, and in which they truly are interested for one of the top placements. Judges will be aware that a great deal of significance is attached to the final round, and only the very top entrants should be so rewarded. This selection process will result in a minimum of two and a maximum of eight to 10 entries (depending on class size), which will return to the ring for final judging.

Each judge is required to write a critique of each entry he or she selected for the final round of competition. With all the class entrants in the ring, the steward will combine the numbers from the judges’ cards and read in ascending order the entry numbers which will return for final judging. Results of each judge’s selection from the various rounds will be posted after completion of all competition.

FINAL ROUND JUDGING – Best and Reserve of each class will be awarded first. Then the four winners will be judged together in the ring for the Silverwood Trophy. The judging order will be (1) Silverwood Trophy, (2) Lovell Trophy, (3) Brigadier Trophy and (4) Best of Opposite Variety. (After the Silverwood Trophy winner is chosen, the Reserve Dog or Bitch to the winner of the classes will enter the ring to compete for Runner-up (except in the case of a referee decision).

CONFERRING – Judges are not to confer in the preliminary round. The judges are encouraged to confer in the final and trophy rounds. At no time during the judging of any class will either judge confer with the referee of that class.

REFEREE – If the two assigned judges disagree between two entrants for a class or trophy placement, the referee will enter the ring, judge those two entrants, and render a decision which will break the tie. The entrant not chosen is automatically reserve for a class win or any final placement.

The three judges this year were Gordon Smith, David Alexander and Melanie Whitehair. The final Trophy Round was judged by Mr. Smith and Mr. Alexander, and the referee was Mrs. Whitehair. Around 4 p.m. Jedi Mind Tricks 1926 became the Best American Bred Bull Terrier, or the Silverwood Trophy winner. He is just two and not yet a champion. This youngster is owned by Grace Thomas and his breeders Gina and Edgar Martinez. Runner-up to the Silverwood winner was GCh. Malajo’s Formula for a Drama Devil. He is owned by Cathy and Bill Sodomsky and his co-breeder Krista Prater-Piles.

Best of Opposite Sex was Envoy Wait for It. She is owned and bred by Diane Davis.

Because I had the honor of judging the national, I could not watch Silverwood, which is the highlight of the weekend. The day of Silverwood was a travel day for me, coming from Poodle Club. It was my first time at the Roberts Centre, and I was very impressed with the venue and the hotel. It works so well for a national that is not huge. Like all restaurants and hotels right now, they were short on staff. The Saturday-night banquet was actually very nice, and the food better than average.

I was very surprised at the depth of quality all the way through from even the puppy classes. There was great, great depth in Colored and White bitches in the classes. I only regretted that because of absentees I only had two Awards of Merit in both Coloreds and Whites. Many top specimens went without a ribbon.

In Coloreds my Winners Dog was here from Peru. He could not be shown at Silverwood since he was not bred in North America. His name is Great Treasure of Gold Dinasty, and is owned by Juan Rojas. My Reserve Dog was the Silverwood winner. My Winners Bitch was a very stunning 10-month-old. She is owned in Canada by Sarah Byzewski and bred by Bob and Grace Thomas. She should be a strong contender to win Silverwood next year. She also won the entire sweepstakes under Shawn Evans. Reserve Bitch was Envoy Bryter Layter, bred and owned by Diane and Maria Davis.

When the BOV class of Coloreds entered the ring, I immediately knew I would be splitting hairs. After my mind raced and raced, BOV went to GCh. Apprentice’s Gandy Dancer. This stunning brindle bitch is owned by Cindy Perrott, Barb Deevers and Mary Kay Migliore. She was co-bred by her owners and Franne Berez. She was Reserve Colored Bitch at Silverwood to my Reserve Bitch.

BOS Colored was Ch. Old England’s First Gentleman, owned by Melissa McConnell and breeder Walter Bavol, Jr. He is a dog of great class, and is the right amount of Terrier and Bull.

The Winners Dog in Whites was Patterned Head Bull Boot, owned by Mark and Jane Lindquist. He is a foreign bred so could not be shown at Silverwood. Reserve Dog was a powerhouse of a dog, but still has class. He is bred and owned by Anita and Walter Bavol. The White Winners Bitch was Grabo Chasing Starlight at Stonewall, owned by Eileen Ebey, Nona Quigg and her breeders Grace and Bob Thomas. The Reserve Bitch was Old Forge Stardom Mina Wolf, bred and owned by Christine and Dale Schuur.

Best White was the male GCh. Grabo Masterpiece by Formula, bred and owned by Grace and Bob Thomas. BOS was GCh. Actions Formula for a Drama Princess, owned and bred by Krista Piles and Franne Berez. Select Dog was the litter brother to the Variety winner. He is owned by Cheri and David Croucher and bred by Janet Cooley, Jan Dykema and Grace Thomas. The Select Bitch was Ch. Old Forge Goodness Gracious, bred and owned by Dale Schuur.

Best of Breed went to the White dog and BOS to the White bitch. When I finished, my mind was still racing from the depth of quality. The breed is in fantastic shape, and hopefully some of them will be seen at the all-breed shows.

© Dog News. This article may not be reposted, reprinted, rewritten, excerpted or otherwise duplicated in any medium without the express written permission of the publisher.
Sat, 12/04/2021 - 10:15am