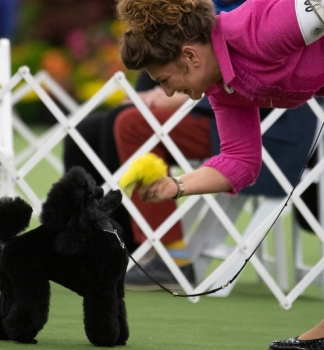 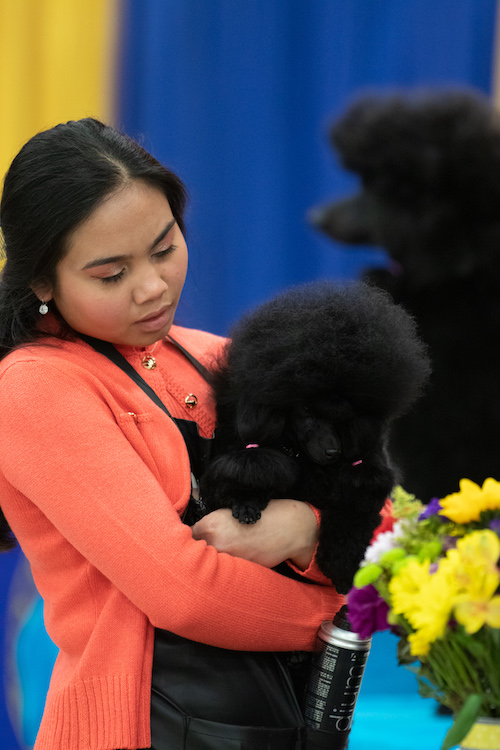 Poodle Club of America, which this year was held April 27 to 29, certainly is one of the most magical events in the world. One has to witness it to comprehend the electricity that lasts from beginning to end. It always attracts top breeders from many foreign countries.

For well over 60 years, PCA has always been a highlight of the year for me. When I was a very young child, probably seven or eight, the “Our Dogs” and “Dog World” annuals would arrive from England. I would sit on the floor cutting out all the pictures of Poodles and keep these pictures in shoeboxes.

In the late ’50s, PCA was held the third weekend of May at the famous Garden City Hotel on Long Island. It was held on Friday, the day before the Ladies Kennel Association. Living very close, I would get my father to drop me off an hour or so before the show would start. After Garden City, PCA moved to Greenwich, Connecticut, then Ludwigs Corner, Pennsylvania. It first moved to an indoor venue in a horse center in Maryland. After just a couple of years, the Civic Center in Salisbury, Maryland, became its long-time home.

Just a couple of years ago, it was decided to move PCA to the Purina Event Center in Missouri. The main reason was the location in the middle of the country might help to bring back the dwindling entry. It is difficult to fly dogs to St. Louis. The foreign people mostly fly to Chicago and drive down, which is about six hours.

The Purina Event Center has many positive aspects for the show. The club does a remarkable job in making the venue look like a great “Garden Party.”

Last year, in 2021, because of Covid the show moved from April to the very end of October. It was felt going this late in the year would be easier for people to travel, with fewer restrictions. The entry was good considering Covid was still a big issue. It was hoped that the entry this year would be a good bit better than last for several reasons. But the entry did not get larger and basically was just about the same. 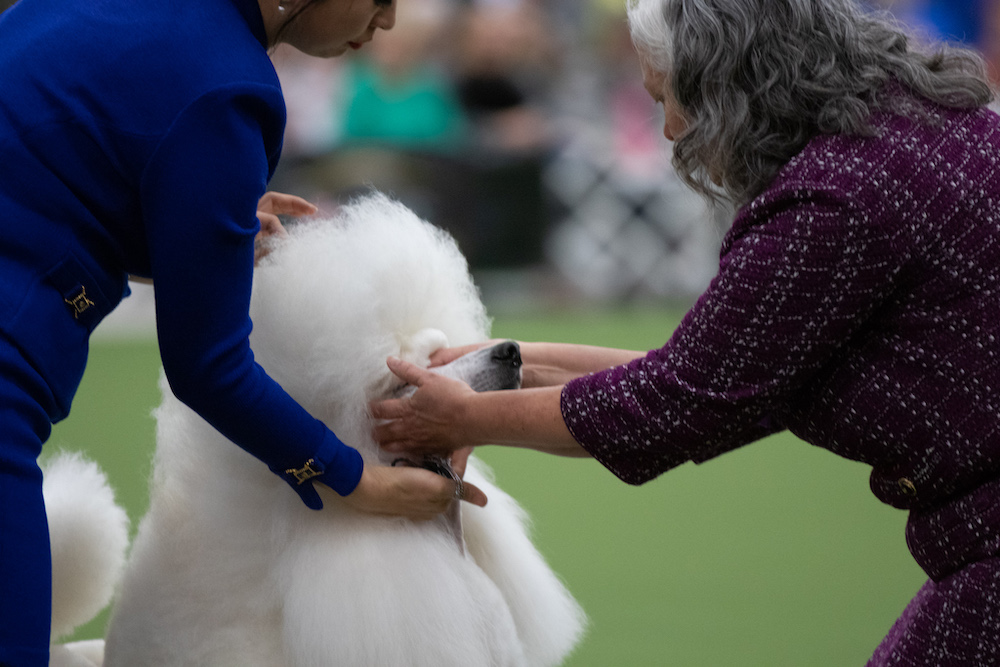 Surprisingly, there were quite a few handlers who did not participate. For many obvious reasons, nationals do not draw the same entries of years past. In all breeds we do not have as many breeders and very, very few large breeding kennels. In all breeds we are seeing some young exhibitors, but very few are breeders, and sorry to say many will never become breeders. The average age of breeders is becoming older and older. In South America and Asia, we see many, many young breeders. With all the animal-rights people taking over many European countries, we will see fewer and fewer breeders. Fifty years ago, we had so many huge breeding kennels in Toys, Miniatures and Standards. Today even if people can afford to keep a large kennel, they cannot find help. People do not want to work after 5 p.m. Nursing litters require nighttime help. The National Owner Handled Series has brought more entries to shows, but many are not breeders and will never become breeders. Poodles and Terriers are dying breeds, because so few young people have the talent or interest in putting in the long hours to prepare the dogs.

It is a breeder’s dream to win at PCA, but many of the top breeders come to see young dogs that might be an asset to their breeding programs. Some of the foreigners come to PCA to see what the American breeders have to offer to help their breeding programs. We did see this year that Canada, England and Korea had deep depth of quality. Sorry to say, this year the great “Smash” kennel of Toys from Japan was not present. There was much speculation about why the entry was not better this year. It was probably a combination of factors that nobody has control over. I suspect for 2023, the country will be back to normal times again and the entry will be better.

Just weeks before PCA was the Potomac Labrador Specialty. It was interesting that gas prices, airfare, etc., did not affect that entry.

To stage an event of the magnitude of PCA is extremely costly. I cannot think of other nationals that have the great expenses of PCA. On Tuesday afternoon, the massive array of plants, trees and potted flowers moves in. This, combined with the green AstroTurf, creates the image of a huge Garden Party and the feeling of being outside with perfect climate control. The entry-fee income does not come close to paying all the high expenses. Like some other nationals, they sell preferred ringside seating. 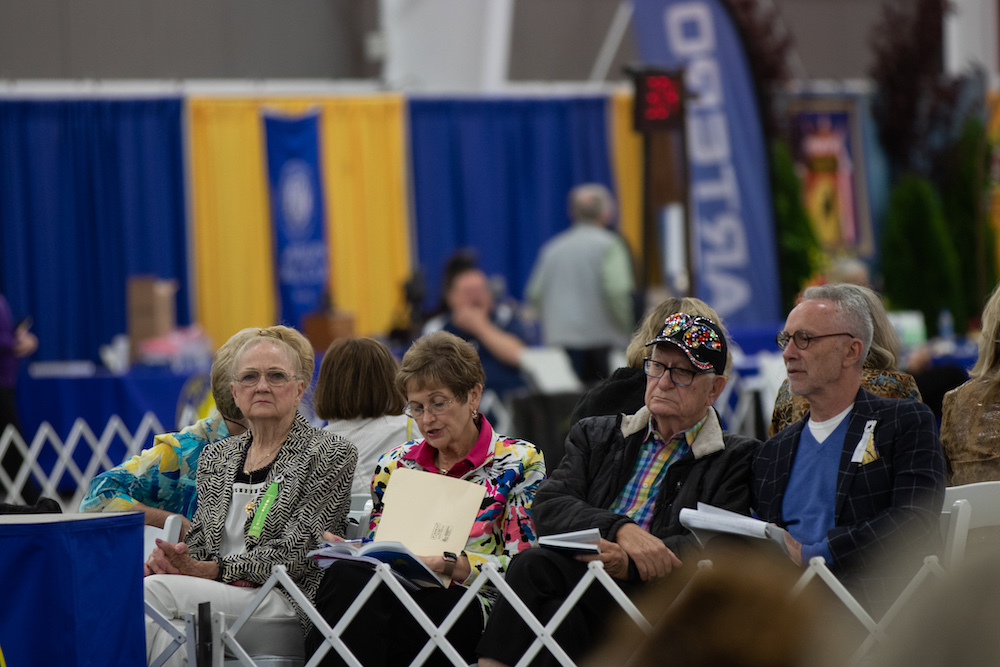 Two major live auctions are held on Wednesday after judging. One auctions the prime ringside grooming spots. Very many of these prime spots go for more than $1,000. Another major fund-raiser is auctioning the prime RV spots. I believe that some people inflate the bidding in order to be able to make the donations higher. 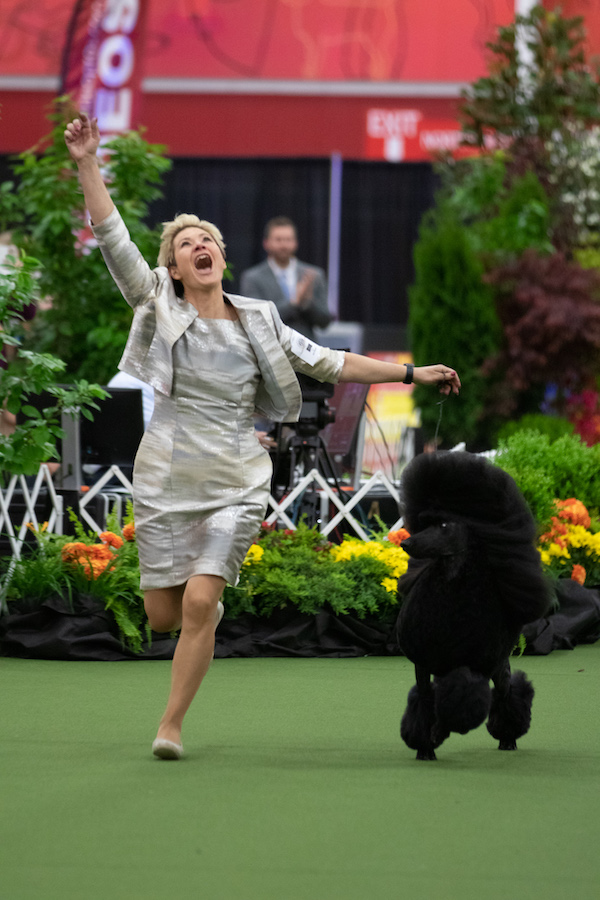 Many nationals are put on by regional clubs that are responsible for the financial obligations. It is getting harder to find regional clubs that will host the national. Year ago, PCA also had a floating national in different areas of the country that was hosted by different regional clubs. As entries dropped and dropped, these shows were abandoned. There has been concern about the PCA entries dropping in recent years. Actually, since 2014, eight years ago, the entry has only dropped about 100. We have to remember that nearly all nationals are not as large in recent years.

This year we did see a lot of new owner-handlers showing some very nice dogs. The modified trim allows for owners to be able to show their dogs without spending hours and hours each week keeping their dogs in big coat. Many owners do not have the time or the skill to keep the dogs in big hair. At the AKC National Championships in 2020, my Miniature BOV was in the modified trim. He was handled by Daniel Chavez, who is a master with hair.

Wednesday was opening day, with the males of the three varieties being judged. It is the day all breeders are looking to see what males might be useful in future breedings. 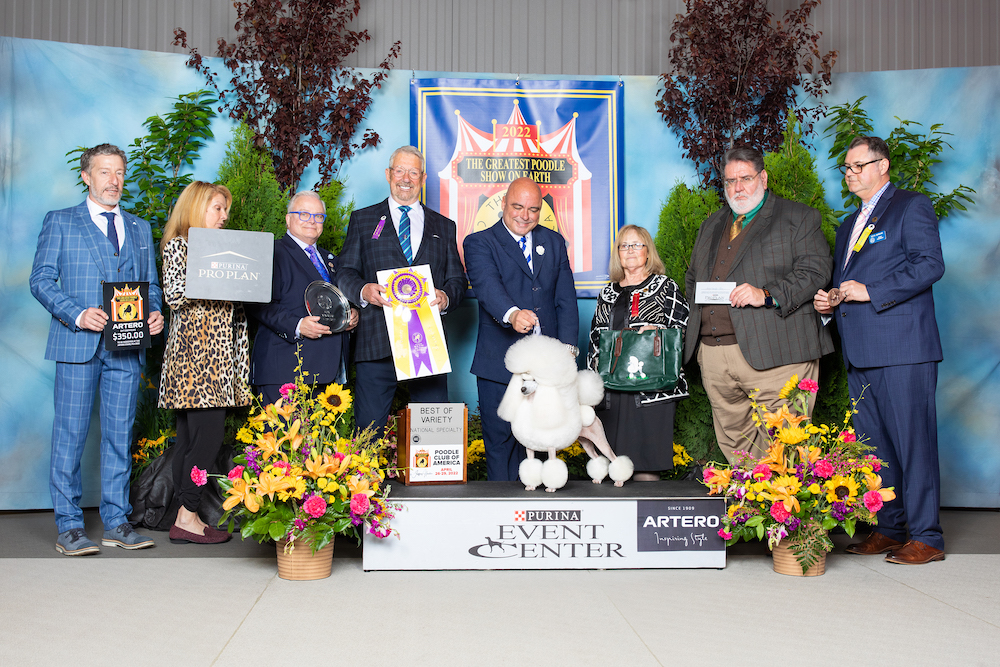 Normally, the depth of quality in bitches is stronger than dogs. This year there were some nice youngsters in class dogs, but not as much depth as some previous years. The strongest depth of quality in class males was in Minis. At most all-breed shows we usually see very few Minis. Fifty years ago the Mini variety was the strongest in the U.S. So many of the top kennels were wiped out because of PRA. 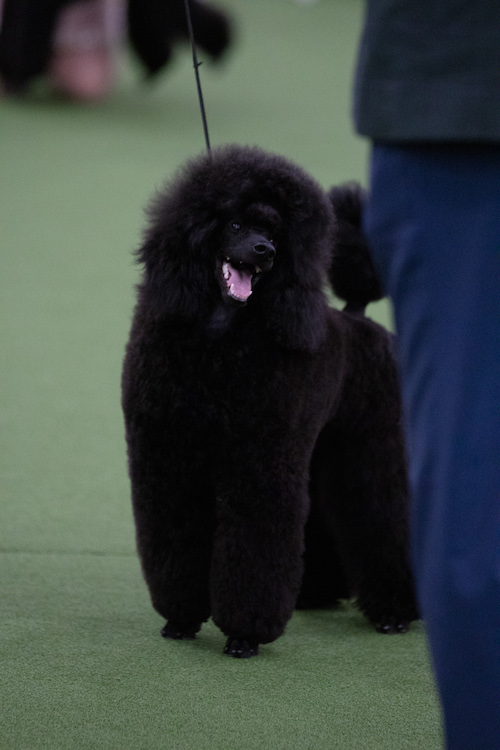 In recent years we do see several Mini breeders who come to PCA year after year with top quality. A brown Bred-By puppy bred and owned by Janet Lange and Kathleen Poe was Winners Dog. This exciting puppy will go on to some great wins. Karen and Dan Giles went Winners Bitch with another stunning brown bitch. It is interesting that through the years we have seen much more depth of browns in Toys and Standards. It is so rare to see top quality in brown Standards. I was at the show where Terry Myers went BIS with the first silver Standard.

There was the feeling at the end of the day on Wednesday that the next day the overall depth in bitches would be stronger, and it was. It is the bitches that are the future of any breed, but we need strong quality males to breed them to.

We always see more of a foreign presence in Toys and Standards than we do in Minis. This year was no exception. The BOB was the Standard Swed Nor Fin Dan Eng and Am Ch. Dawin All the Buzz. He is owned and bred in Canada by Linda Campbell. He has been campaigned the last couple of years in Sweden by Lotta Sandell. He was the number-two dog all breed in Sweden in 2019. He also was BOB and Group 2 at Crufts. The “Dawin” kennel also was Winners Dog in Standards.

In Toys the Winners Bitch and Best of Winners was Serenepark One Night Only. She is owned and bred by Junhee Park. This same bitch was also Reserve Winners Bitch in 2019. Although she was bred in Korea, she is basically all “Smash” breeding. This same Korean kennel won the 9-12 Puppy Dog class and 6-9 Puppy Bitch class. It is interesting to note that at our Pom national, BOB was a Korean-bred dog. At the very recent Bichon national, a Korean-bred was BOB. Korea is exceptionally strong in so many breeds right now. 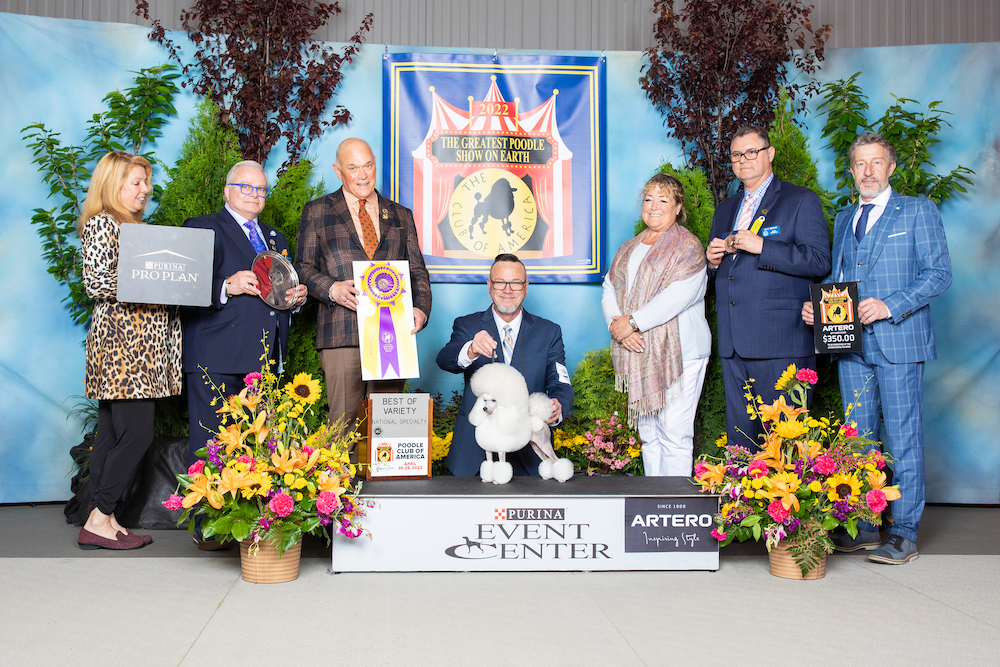 In the hallway at the Event Center there are always several huge banners displaying the BOB winners from the start of PCA. Each time I pass them, I stop and look at all the past winners. It brings back so many great memories of so many great Poodles. Hopefully someone will eventually do a piece on all the winners. 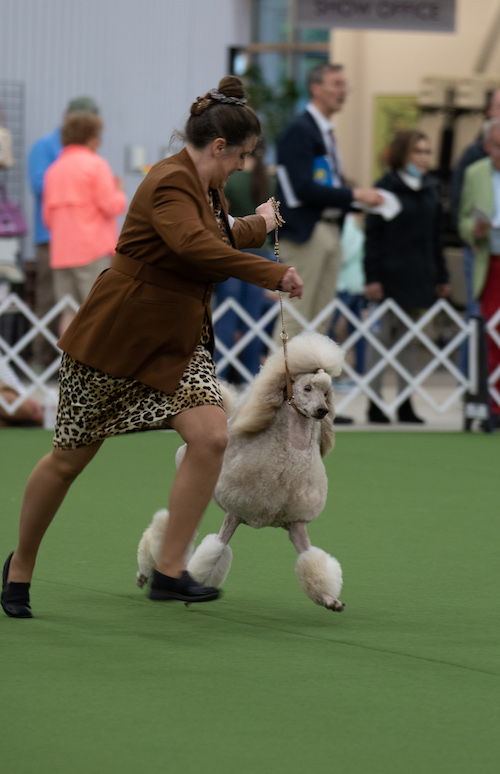 PCA probably does more for the Juniors than any other breed club. Gina Wiser heads up the committee. They have a big table with auction items. They sell a hundred 50/50 raffle tickets at $50 per ticket. They have a pizza party as well and do everything they can to help and encourage the youngsters. Hopefully some of them will become the future great handlers and/or breeders. I first met Joseph Vergnetti at a match show when he was 17 years old. Now 53 years later he has become the leading breeder in Standards, Miniatures and recently Toys.

Although there are no hotels very close to Purina, there are quite a few within a short distance. The host hotel for PCA is the “Wildwood.” It works great. The staff could not be more accommodating and friendly in all respects. It is about a 20-minute drive door to door. Actually, a lot of nationals use the Wildwood. Across the street used to be a great restaurant, but the owner closed during the pandemic to relocate for a catering business. Luckily at the other end of the block is quite a large Italian restaurant. It is a favorite being that the food is wonderful and you can walk easily from the hotel. During the day at the Event Center the food in the café is better than we get at most shows. The catered lunches and club dinners are actually quite good. It is nice also by mid-afternoon there is a bar in the hallway.

To stage an event of this magnitude takes an army. Keith Burbank is the show chair, and it is a show all dog people should experience at some time. Personally, my two favorite specialties are PCA and the Labrador Retriever Club of the Potomac. They are so totally different, but both so unique in their own way.

The huge committee deserves tremendous thanks for staging this great event. Most importantly, all the exhibitors, breeders and handlers have to be thanked for getting so many great specimens to PCA. Hopefully next year we will see again the future of the breed.

© Dog News. This article may not be reposted, reprinted, rewritten, excerpted or otherwise duplicated in any medium without the express written permission of the publisher.
Fri, 05/27/2022 - 10:55am