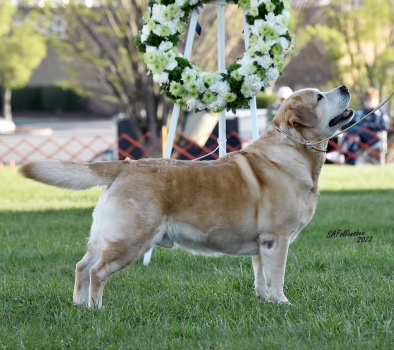 For anyone who has a passion for Labradors, the Labrador Retriever Club of the Potomac show in Frederick, Maryland -- held this year on April 12-15, 2022 -- is the highlight of their year. This was the 45th sapphire-anniversary show, and quite a few of the founding members were present.

Each year, a lot of foreign exhibitors and their dogs make the very expensive trip to Potomac. One lady from Croatia told me the cost of flying her dog was about $1,100. Several of the foreigners brought multiple dogs with them. Offhand, there were people from Canada, Mexico, Puerto Rico, Peru, Croatia, Poland, Korea, India and probably others I did not meet.

For many, many reasons, Potomac is the most unique show in the world. First because it is only a regional club, yet it attracts just shy of 1,000 Labs. It is normally two to three times larger than the national specialty. 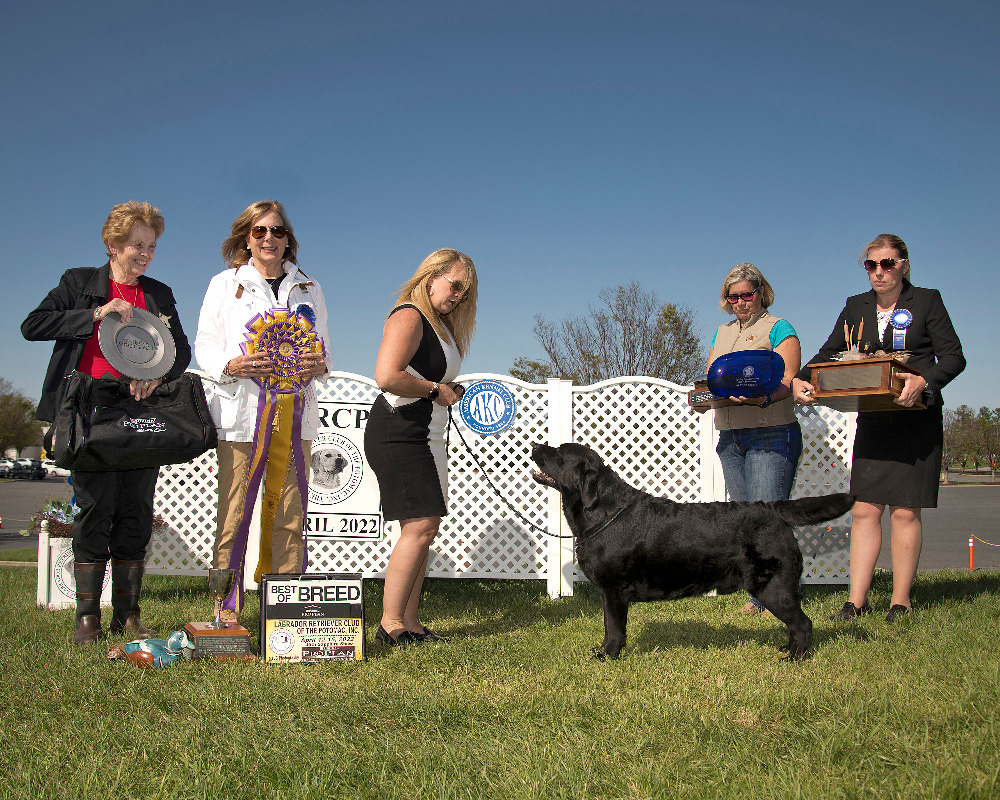 Very few Labrador breeder-judges ever call for a wicket. Usually there are very few Labs over the size limit. A fair number of bitches get shown that are under the size limit. I have never seen a wicket used at a specialty, and very rarely at an all-breed show. I think a male that is over height limit starts to lose breed type. Some bitches under the standard are still very typey. 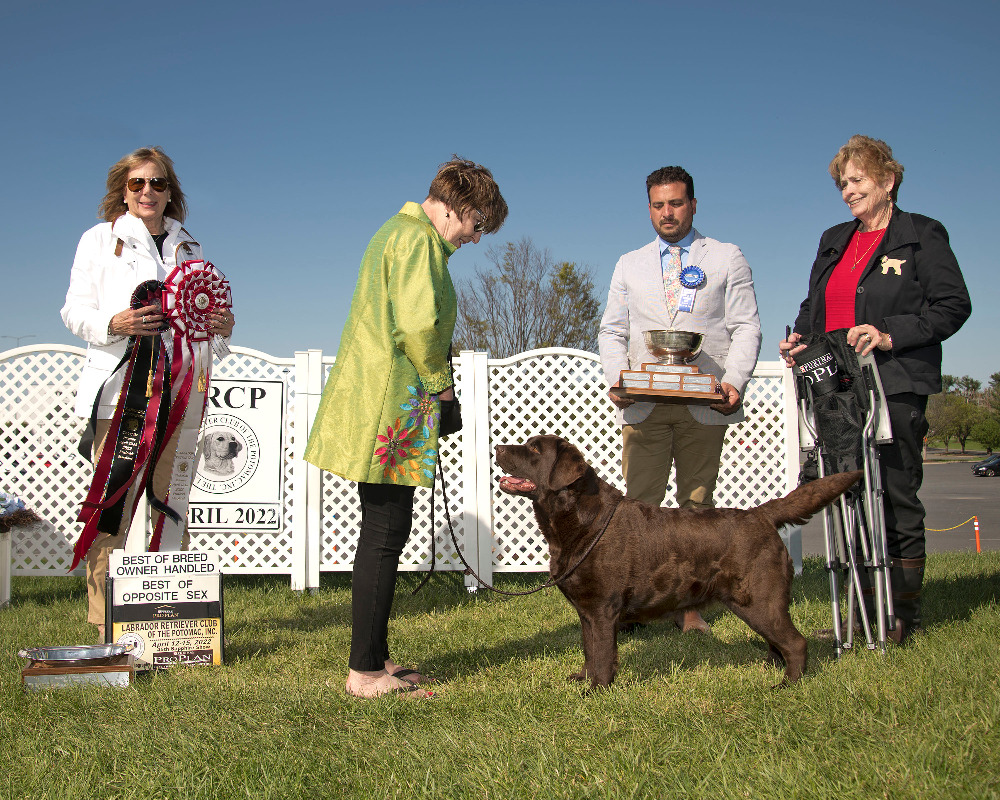 Wednesday night was the Top Twenty gala, which was a beautiful event. The Top Twenty for 2021 were invited, and the top dogs for 2019 and 2020 were honored. It was a sold-out event. The proceeds from the gala were donated to the AKC Canine Health Foundation. I have never known of a regional club to hold a Top Twenty. It is usually only done at national specialties. One more thing that makes Potomac unique.

On Monday there were two match shows running at the same time. One show started with the youngest pups, and the other show with the older puppies. The entry for both matches was about 100 dogs. It is a fun day that does not start until 10 a.m. – relaxing, with no pressure. 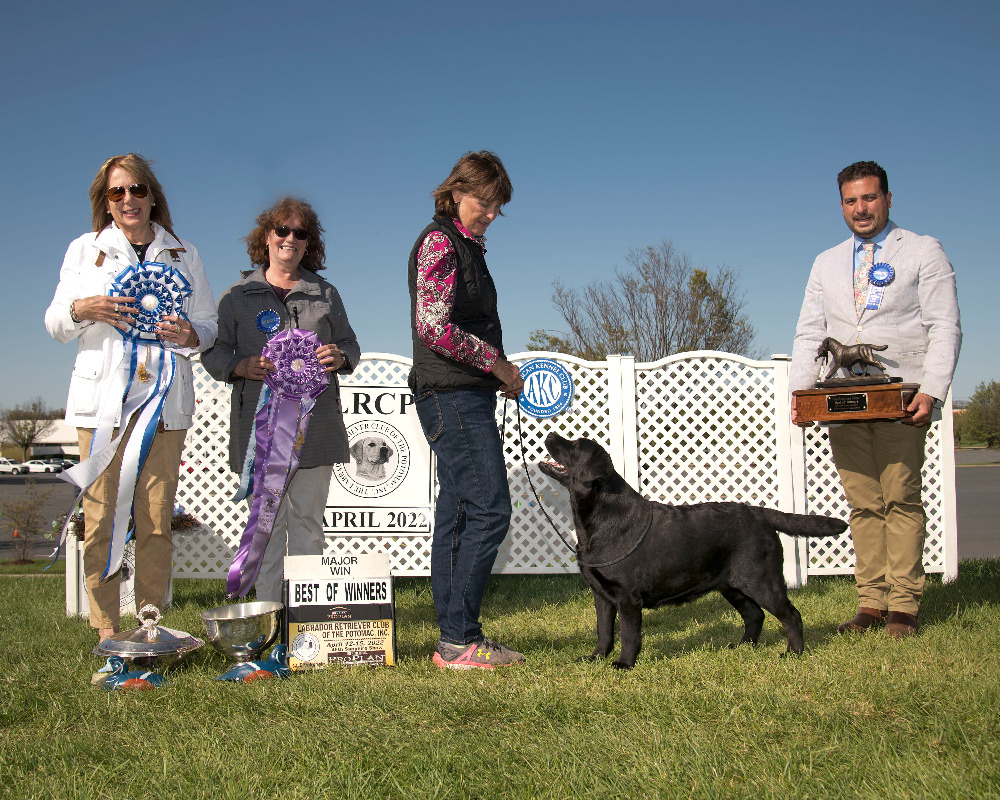 Tuesday at 8 a.m. started the long four days of the show. Having so many dogs requires three rings running at the same time. On Tuesday, 419 dogs were judged. Wednesday was 338 dogs, and Thursday, 206. Friday for Best of Breed, the three rings were opened up to one large ring to accommodate the 108 specials, plus quite a few move-ups.

Just getting the specials checked in took more than 50 minutes. Each dog came in, stopped in the middle of the ring and posed for a short moment, and the judge checked them into her judge’s book. The club thoughtfully had a chair for Nancy Arbuckle to sit in while checking the dogs in. The specials were divided into groups of 20: three groups of dogs, and two groups of bitches. Because of the tremendous depth of quality, Nancy made very large cuts in each group. After the initial cuts came back, a second cut had to be made, and then the final cut. 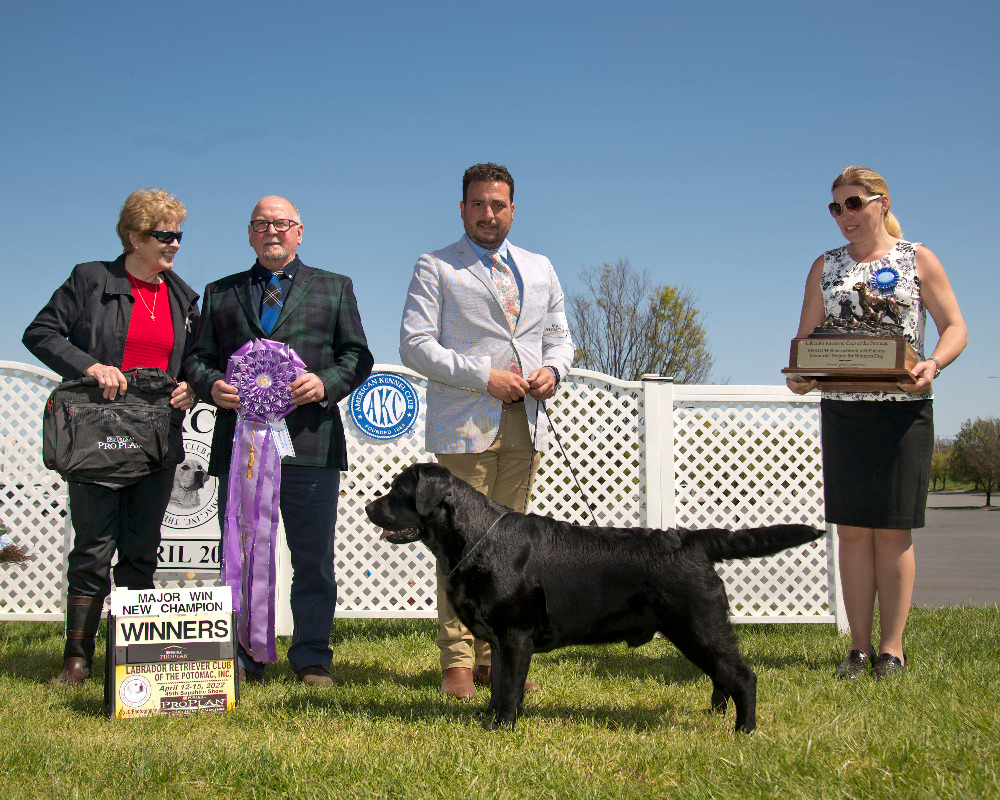 Besides the specials, there were six veterans competing. After BOB was finished, we had Best Owner-Handled, Best Puppy, Best of Opposite Sex to Best Puppy, Best Veteran, Best Hunting Retriever and Best Amateur-Owner-Handler. It was predicted that Nancy would be finished by 4 p.m., which was pretty accurate: Nancy signed her book out at 3:58 p.m.

A breeders’ symposium was held Tuesday from 7 to 9 p.m. On Monday morning, a judges’ seminar was offered, and in the afternoon, a hands-on was held in one of the rings for the judges to practice judging a class. There had to be a dozen mentees who attended so they could get enough credits to meet the requirements to apply for the breed. There was also ringside mentoring each day. This was a good opportunity for the students to acquire credits toward their applications, but they do not get as many points as going to a national. The problem is they come to Potomac and only see top, top quality dogs, and think this is the norm for the breed. When they get approved for the breed, they are going to wonder why the dogs they have to judge do not resemble the dogs they studied at Potomac. 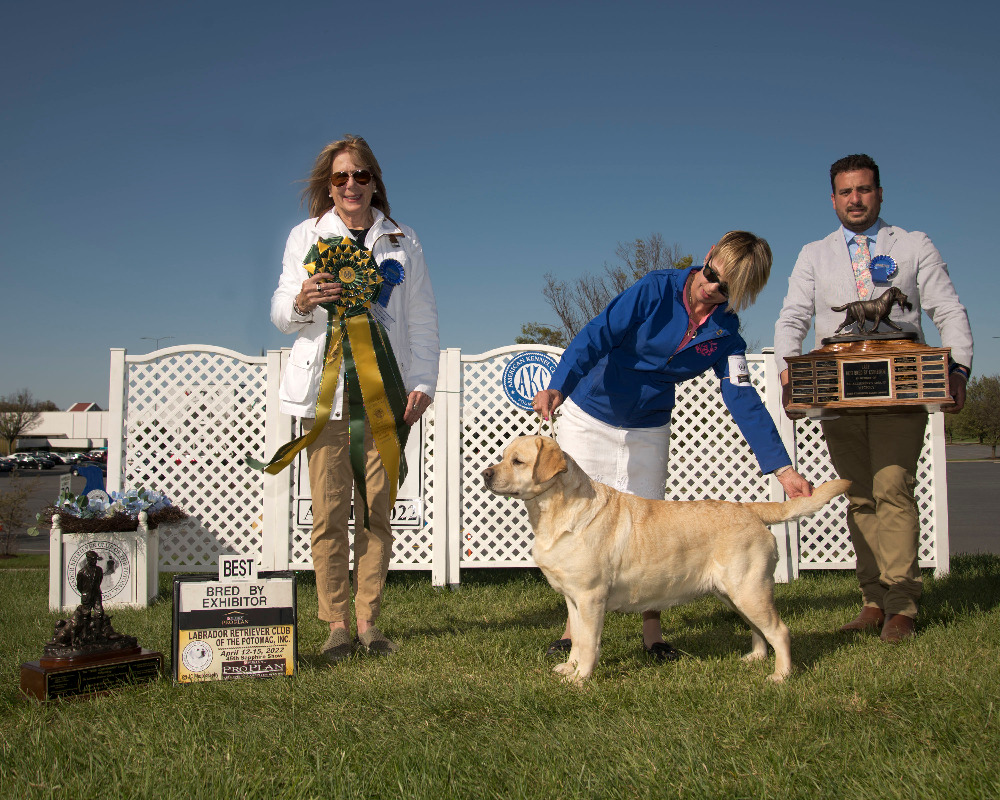 The breed is so very split. So many of the top breeders rarely go to all-breed shows, and then often do not stay for the group. At some of the all-breed shows, the judging is really poor, and very generic dogs win because judges do not understand good type. It is a very fine line to have a Lab that can win big at specialties and also at all-breed shows. There probably are only about 20 non-breeder judges who the breeders support, which is a very small percentage of approved judges.

In his “Best in Show” book, Bo Bengtson lists the largest specialty shows from 1985 through 2005. Other than Potomac, all the other shows were nationals. In this 20-year span, Potomac was the largest specialty of the year 12 times. The Golden Retriever national was the largest eight times. This is another fact that shows just how unique Potomac is. And yet I believe a Labrador has never won the group at Westminster or the AKC National Championship show. 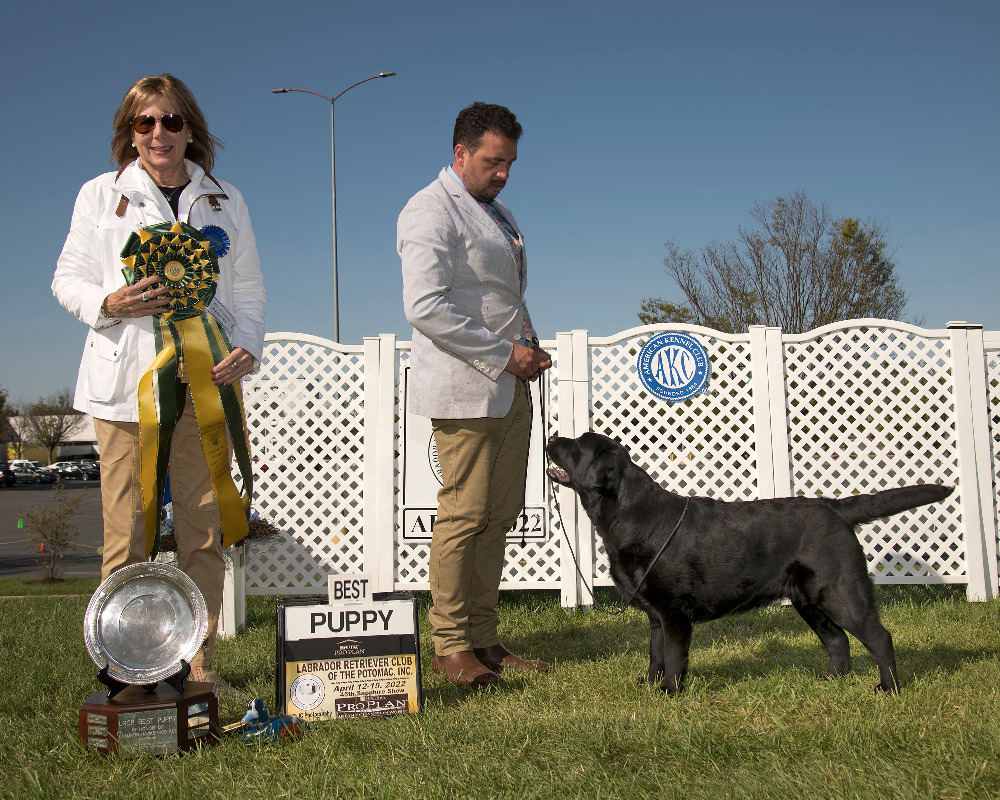 The Labrador people are not totally concerned with who wins. If they lose, but feel the judge put up good dogs, they are happy. In the five days I spent at Potomac, I only heard one person complaining about their placement. Everyone is so happy if they just make the cut in any class.

Most of the Bull Terrier people have the same attitude. The Bull Terrier and Labrador exhibitors have the same mindset because they are not into the ranking systems of the all-breed shows. The highlight of the year in the Bull Terrier world is Silverwood, and it is not even an AKC event. Their national is the day after Silverwood, but does not have the same prestige. Actually, this past year I was the first non-breeder judge to have judged the national. Up until this past year there were only three non-breeder judges who could award ROM points. After years of pushing, we finally got three more non-breeder-judges approved to award ROM points. We are only allowed to judge four ROM shows per year. 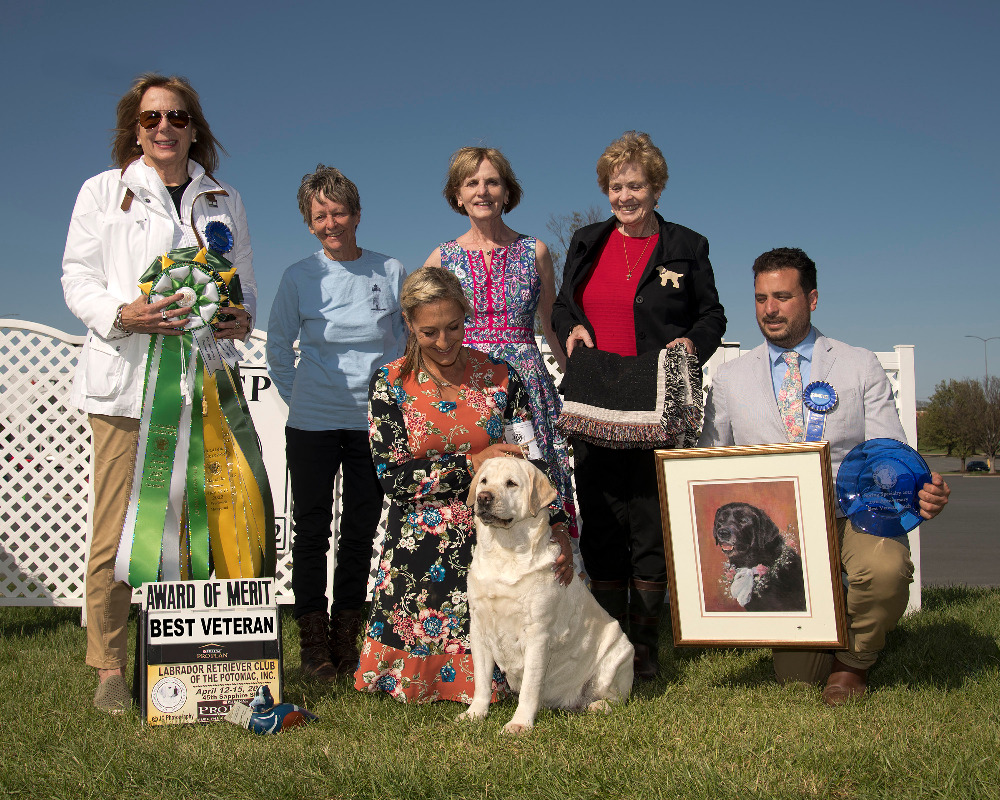 Potomac has a huge table of club items for sale. It takes three ladies working all day long selling the items. It has jackets, shirts, blankets, tumblers, wine glasses, etc., etc. A big seller was the three different wines with the Potomac label on the bottles. This brings in a tremendous amount of money for the club.

So many details go into staging an event of this magnitude, like having the sweepstakes checks run and stuffed into envelopes. There were 30 classes of the regular sweeps, and six veterans sweeps classes. This made for 36 checks plus four more for Best and Best of Opposite in Sweeps, for a total of 40 checks printed and stuffed and also put into the stewards’ bags. The total amount of sweeps prize money was $5,146!

It truly takes an army to stage this event. The list of committee heads goes on and on. There are 32 different committees, and each committee had two or three members. Vicky Creamer is the show chair. Krista Beal and Betty Dust are the co-chairs. Shari Kirschner and Kara Hite are assistants to the chairs. Kristen Creamer-Allison, who is the daughter of Vicky, is the corresponding secretary. The committee members work all year round with all the arrangements.

One has to attend Potomac to fully comprehend how unique the show really is. Hopefully reading this article will give at least a glimpse as to why Potomac is the most unique show in the entire world.

© Dog News. This article may not be reposted, reprinted, rewritten, excerpted or otherwise duplicated in any medium without the express written permission of the publisher.
Fri, 05/06/2022 - 1:16am