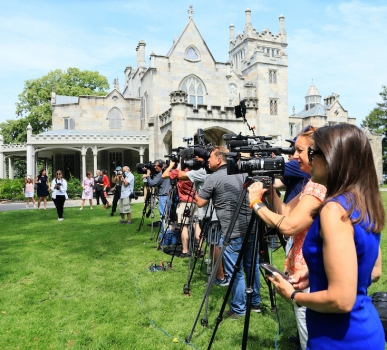 The Miracle at Lyndhurst

In 2021, Westminster overcame all obstacles to stage the show of a lifetime
By
Desi Murphy

The staging of the Garden this year truly was a miracle.

For quite a few of the last several years, obstacles have been thrown at the Westminster Kennel Club. Each year, the club has overcome the issues and actually made things even better.

Because of Covid, it was not possible to hold a show in February 2021 in the New York area. It was brilliant thinking on the part of Westminster to explore holding an outdoor spring show close to New York City. For quite a few years, the Tuxedo Park and Westchester kennel clubs shared a weekend at the beautiful Lyndhurst estate. Due to financial reasons these two clubs were forced to move to New Jersey. Today, no other club could afford to use the grounds.

The Greenwich and Long Shore clubs graciously gave up their dates to allow the Westminster Kennel Club to hold its 145th show on Saturday and Sunday, June 12 and 13. As soon as the permission was granted, Westminster set all the wheels in motion. No other club would have taken on a challenge of this magnitude.

For the group judging, a massive indoor tent had to be built to resemble the floor of Madison Square Garden. This meant building a beautiful floor on uneven grounds. The construction of the floor started close to three weeks before the show. The tent also required climate control. Several days before the show, we had temperatures of 94 degrees. 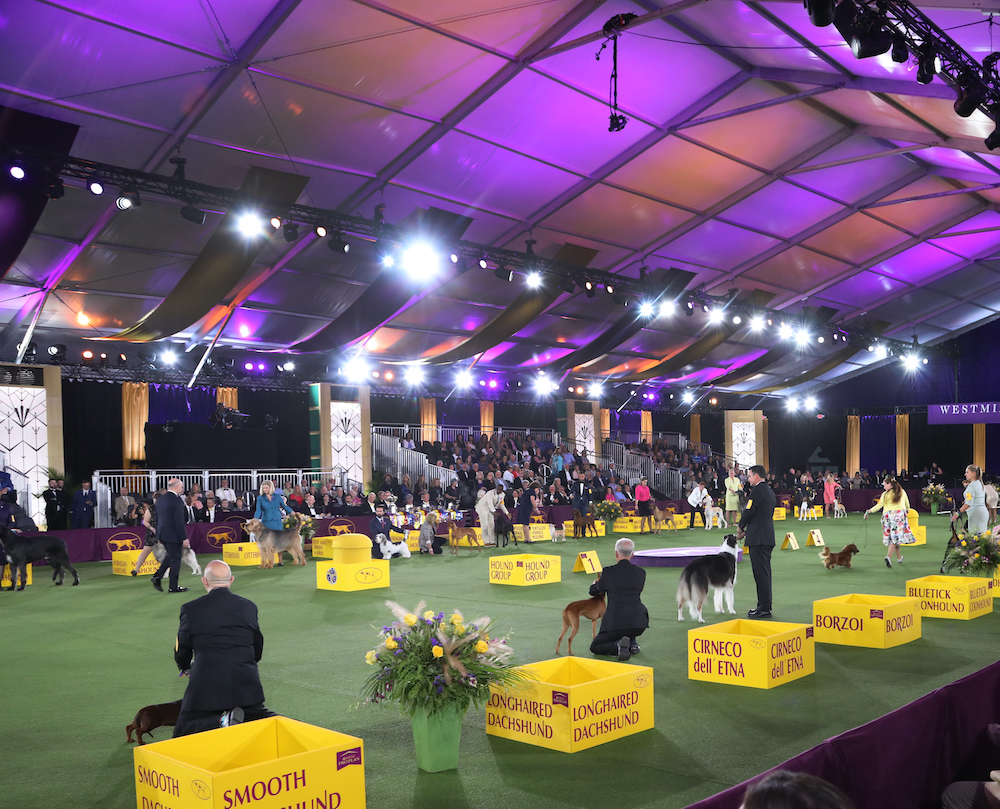 The Hound Group on Saturday night, judged by Jamie Hubbard.

A well-stocked bar was available inside the tent. There was even a wait staff taking orders, so you did not even have to leave your seat. It was the first time we have seen this at any show in the world.

Lyndhurst does not have indoor bathroom facilities. This problem was solved by bringing many trailers with real toilets and climate control instead of the awful port-o-johns. I wish more clubs could do the same.

Due to Covid restrictions, the show was not open to the public. Two tickets were issued per dog. If a dog had four or five owners, they still only got two tickets. Even the press was very restricted, attending in a limited number.

In order to attend you had to verify that your second Covid vaccination was done a minimum of 14 days beforehand, or provide a Covid test 72 hours in advance. In order to ensure that the vaccination records were valid, a company in California, Reel Health, was hired to certify them. The cost to the Westminster Kennel Club was roughly a quarter of a million dollars. In order to enter the grounds, we had to show the verification on the Reel Health app on our phones as well as our tickets. The large staff handling this could not have been more pleasant and helpful. 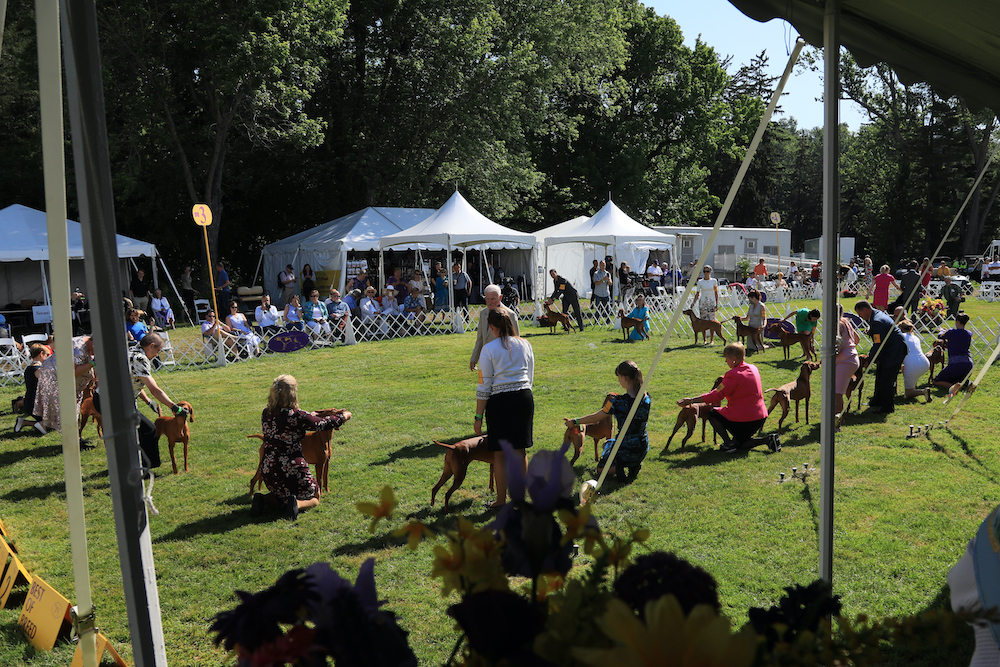 Just before the schedule was done, it was realized that five of the foreign judges could not come. This included Pam Bruce from Canada, Robyn Wallis from Australia and Dan Ericsson from Sweden., in addition to John Reeve-Newson of Canada, who was judging the Non-Sporting Group, and Frank Kane of England, who was to judge the Sporting Group. The only American judge who had to cancel was Carl Gomes, for medical reasons.

Sei-Ichiro Ishimaru of Japan was the only foreign judge who was able to attend. Sei was to arrive on June 6, but was concerned about a travel advisory, so instead he arrived on May 31. Sei is the first judge in all of Asia to judge at Westminster. Japan must be so proud of Sei.

Several years ago, Larry Cornelius won the bred at the Garden with an Italian Greyhound owned and bred by Sei and his mother. This young man is such a respected judge worldwide. Sorry to say, but because the American Kennel Club limits foreign judges to only eight shows a year, he has to turn down many assignments here. (Foreign judges are not restricted to a number of independent specialties.) Last year Sei judged eight shows over a 10-day period. It was nice that several friends were here to watch him judge. Everyone I spoke to had the highest praise for the nine breeds he judged.

Due to Covid, we had very few foreign exhibitors this year. We had a Dogo from Japan that got an Award of Merit. The black Cocker that won the breed is from Japan. Labs were won by a chocolate bitch from Mexico. Her owner, Juan Carbonell, won several other ribbons, plus an Award of Merit with his lovely Golden. The breed winner in Bichons is also owned in Korea, but the dog lives in Texas with David Harper. We did have some other foreign Bichon attendees: Valentin Trotsiuk from Ukraine and Janita Plunge from Lithuania.

Having an entry of 2,500 dogs split over two days meant that only eight rings were needed. This enabled us to see the judging of many, many breeds, and judging did not have to start until 9 a.m. But from start to finish we did not get to see every breed we would have liked to have seen. 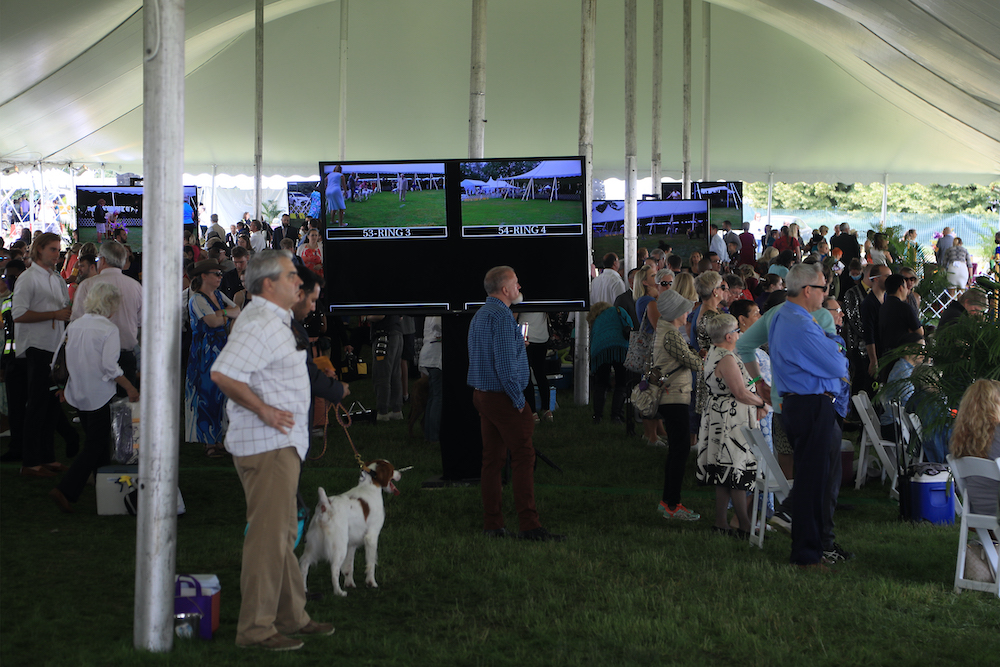 Large-screen televisions under the tent collated all the judging action for those ringside.

There were four rings on each side of the large tent, so one could get from one corner to the other very quickly. There was a huge aisle running through the tent that was never crowded. In the event of inclement weather, the rings could have used a lot of this extra space to keep the dogs out of the rain. There was one large grooming tent, but many worked out of their nearby cars or vans. 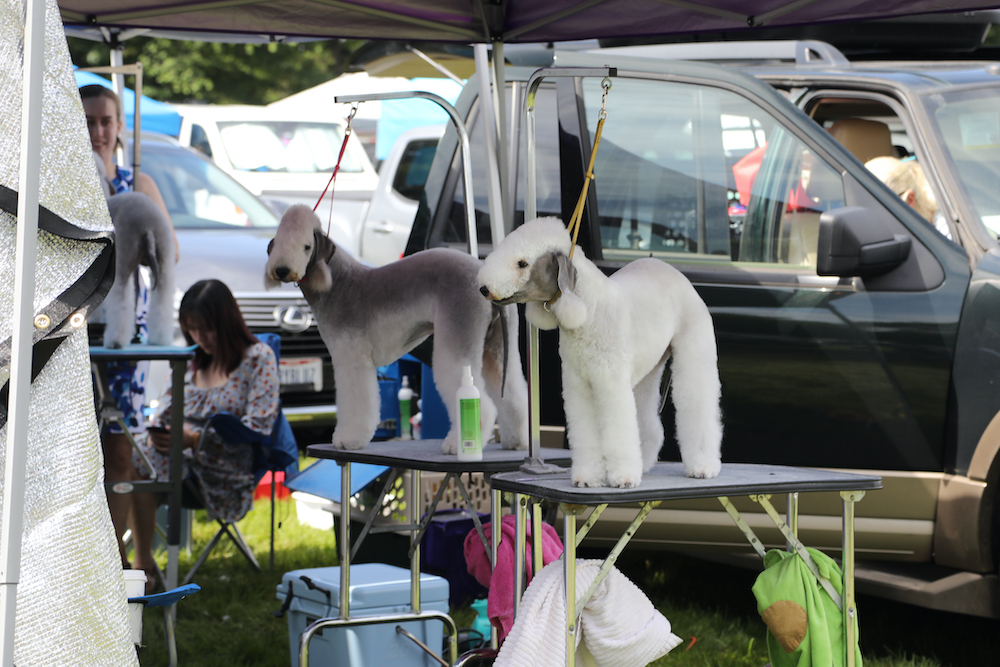 Westminster 2021 was free of benching, and many exhibitors opted to set up beside their vehicles.

Being that Lyndhurst is in a very affluent area, there was lots and lots of fine dining nearby, as well as quite a few good hotels that allowed dogs. Many people stayed at the Sleepy Hollow Hotel, which was so close to Lyndhurst that many people actually walked to the show.

Some people were able to fly into Westchester Airport, which was less than 15 minutes from the show. Newark was the farthest airport, but had the least traffic. Many flew into LaGuardia or JFK, and hit horrific traffic. Being so close to New York City, several ventured into the city for lunch on Friday. So many of the wonderful restaurants in Tarrytown had signs outside that read: “Welcome, Westminster Dog Show.”

The Sleepy Hollow Hotel has beautiful, large garden areas to walk and exercise the dogs in a lovely setting. The guest rooms had small patios to sit outside and enjoy drinks or a smoke. The only drawback being outside of New York City was the lack of late-night dining. At close to midnight after the evening judging, McDonald’s was about the only option.

At the end of Saturday afternoon, I ran into the two miracle workers, David Haddock and David Helming. I told them this is the only show I have ever been to at which I did not hear even one tiny complaint! The Facebook warriors who were not even there saved their complaints for the internet. Just so happy these critics were not present. Even the handlers and exhibitors who did not win with their big-winning dogs were being good sports. I wish this attitude was present at all shows. I often get accused of being so positive. That is the reason why attending dog shows for more than 60 years, I have never once not enjoyed a show – anywhere. It must be human nature for negative people. At any dog show, the vast majority of people will not be winners, so it gives negative people the ability to vent their frustration. 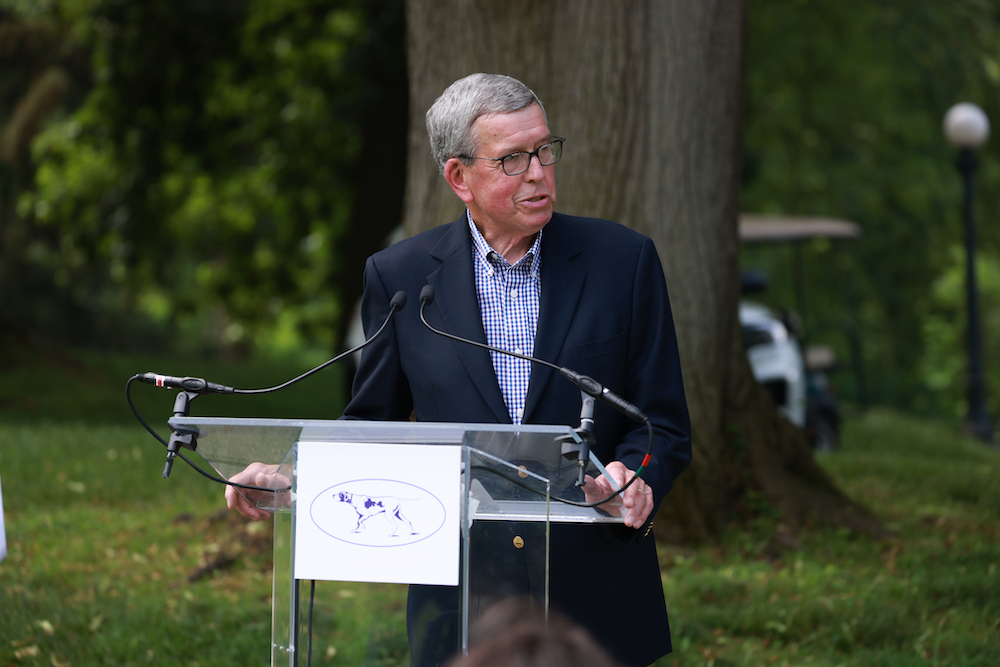 The Facebook Warriors complained that the judges did not spend enough time on the dogs in their group. They know nothing about how TV works. There is only so much time allotted each evening for live TV. All of the judges have to keep an eye on the clock and stick to a very tight schedule. They need to appreciate that they and the entire world get to watch the show live. In the near future, as we recognize more and more breeds, and some of our groups have 50 dogs, I hope that we will pre-judge the groups as they do in Europe. In a large ring, the judge views all the dogs before they enter the main ring. When all the dogs enter the main ring, the judge pulls out eight to 10 dogs and judges them. As the groups grow in size, pre-judging them will eventually become necessary for any of the televised shows.

A lot of people feel television should not control the sport. They do not realize just how many of our leading fanciers came into the sport by seeing the Westminster show on TV. They were young kids and begged their parents to get a dog. They then wanted to show their dog and went to a dog show. Some of them even wanted to be judges one day, and some are now. Very few shows today get many spectators, but we get a large viewing audience on TV. 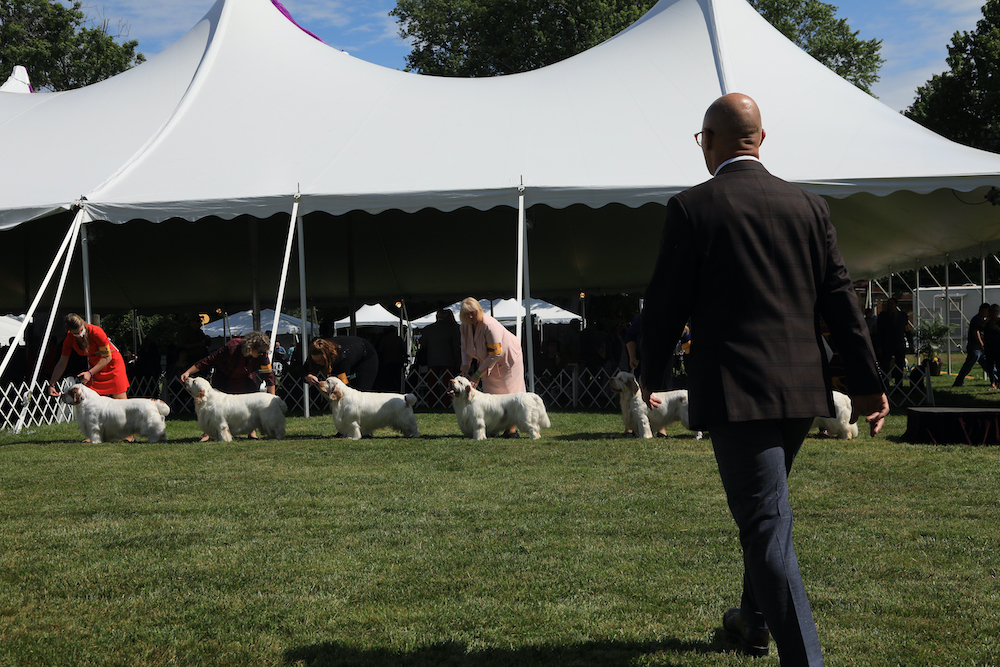 A young man of about 17, Elliott Wentzel, posted a lot on Facebook about his first trip to Westminster. He said it was a dream come true. He has only had a dog for about a year. It is a Standard Schnauzer and he has learned to trim it himself from YouTube videos. In 2010, his family was flipping through the channels and on came the Westminster show. Elliott immediately became hooked and has never missed the show on TV since then. He bought the DVDs of Westminster from 1992 to 2008.

It is heartwarming to see young people with a tremendous passion for the sport. Elliott is just one example of how watching the Garden has brought passionate people to the sport. Some of these younger people are our up-and-coming judges.

Lyndhurst is a Garden none of us will ever forget, as it was so different than any other Westminster. Next year we will be back in Manhattan, and Westminster has had yet another hurdle to overcome: Because of television coverage of the Super Bowl, the show had to move to January 24, 25 and 26. In addition, a different pier has to be used for daytime breed judging.

When Pat Trotter stepped out to center stage, it brought great memories of her winning the Hound Group 11 times at the Garden. No breeder has ever accomplished this. Her speech rang out worldwide. No truer words have been spoken: “Not all pets are show dogs, but all show dogs are pets.” The audience became quite emotional. Hopefully the TV viewers realized these dogs are beloved pets. We have to remember that nearly all of the great people in the sport start out by buying a pet. 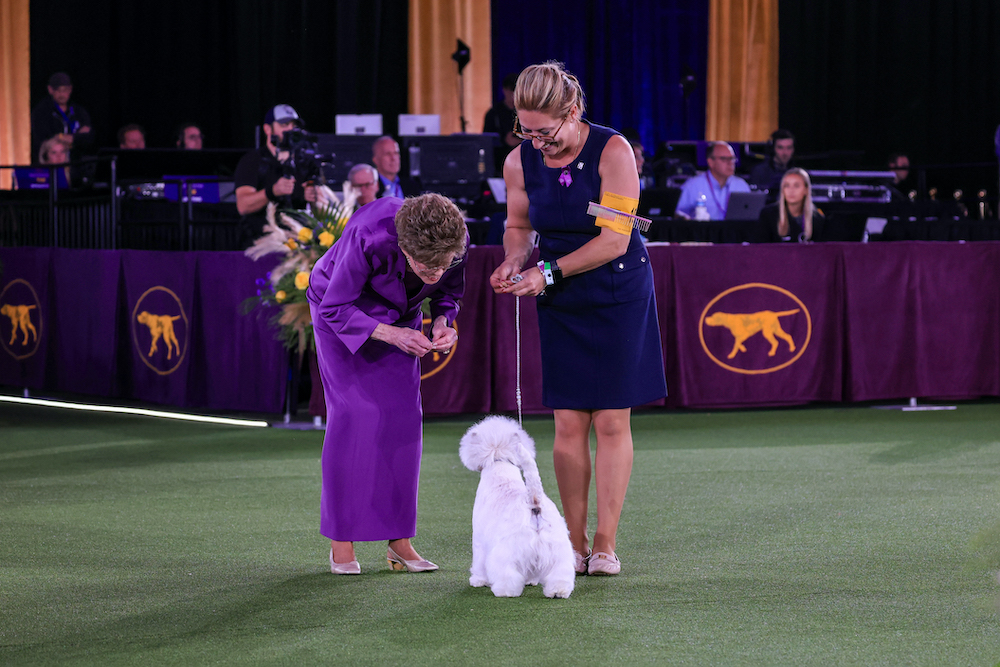 We all owe a great deal of gratitude to Fox TV for showing the public what our sport is about. The sponsors were Purina Pro Plan, Cosequin, Embark, Trupanion and Home Depot.

Co-chairs David Haddock and David Helming had a great committee helping with all the details. We knew it would be a great show, weather permitting, but it was much better than anyone imagined it could be. Over the two days I heard not one complaint about anything. Everyone was in a totally positive mood.

This was my 63rd consecutive Garden. Each one was always memorable, but this one was so unique, none of us will ever forget the “Miracle at Lyndhurst.”

© Dog News. This article may not be reposted, reprinted, rewritten, excerpted or otherwise duplicated in any medium without the express written permission of the publisher.
Sat, 06/26/2021 - 11:04pm