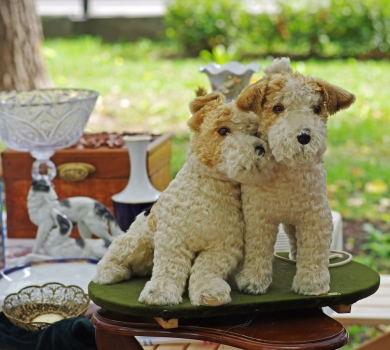 What one dog-related object is your most prized possession, and why?

Mrs. Billie McFadden was the first person I ever met in conformation, 38 years ago. She taught me so much and became my mentor on rules, always being a straight arrow, and became a close and dear friend. The past few years Billie slowly faded into the silent world of Alzheimer’s; still the times I could be with her meant so much to me. When she physically left this world on October 16, 2019, her cousin Kathleen entrusted me with Billie's most loved possession, a beautiful Boxer musical carousel. Needless to say, this alone is my most precious dog-related possession, as Billie was my most precious wonderful friend. 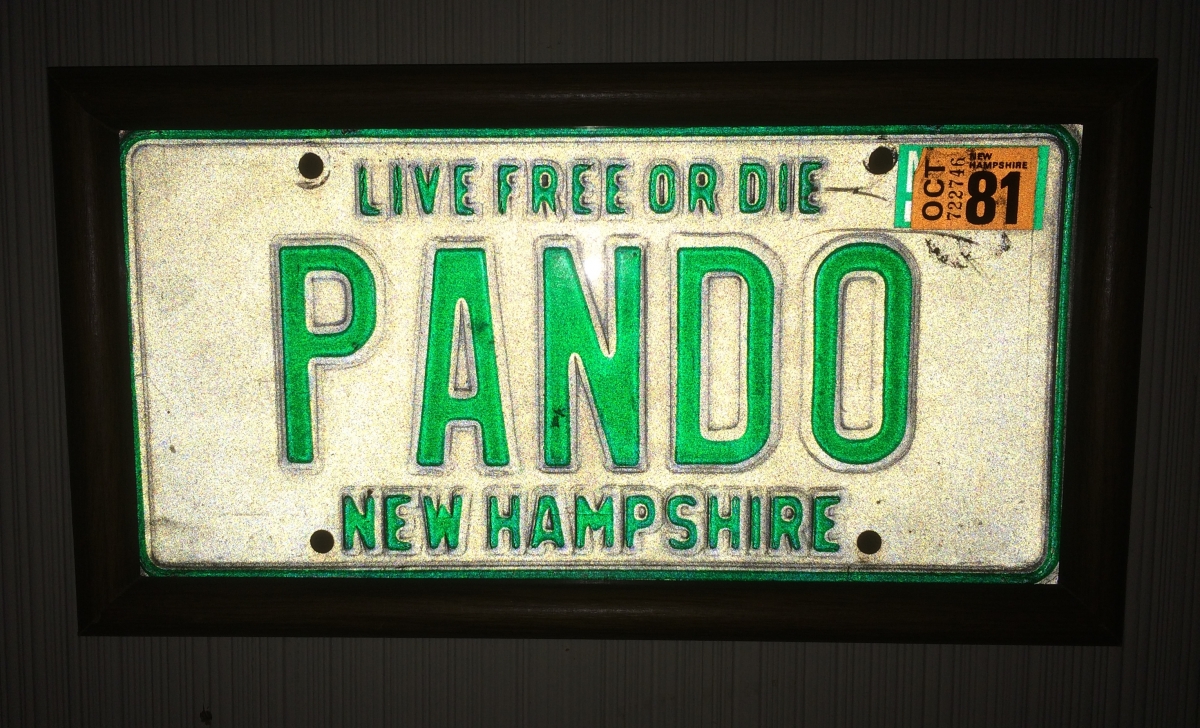 One of her most famous Siberians was Ch. Monadnock’s Pando, an important sire in many pedigrees.  His name was on her personalized license plate. It has been auctioned to benefit the club, and now resides in my den – a reminder of dedication and striving for excellence. 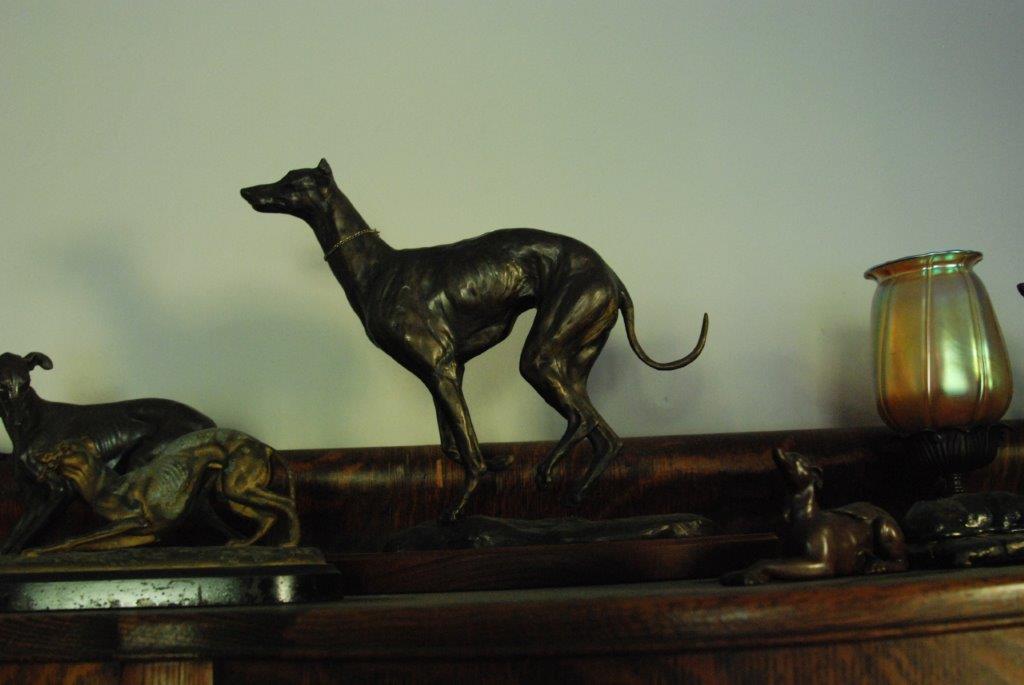 The late Cora Miller of Hound Hill Whippets was a great benefactor, in all ways, for our Whippets. Most don't know that because she was that kind of class and shared her generosity, anonymously, almost all the time.

I was visiting her home many years ago and saw this bronze on a shelf. I knew they existed, but believed they were all long gone.

When she told me I could have it, I took it from her hands and looked it over.

Her typically generous response was: "Who better than you to have it?" 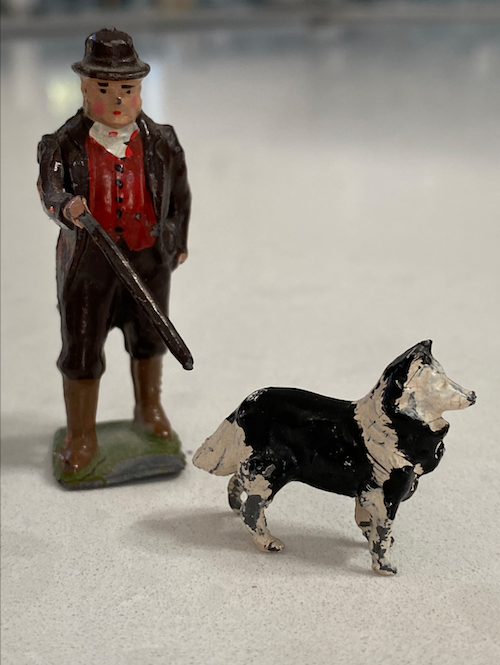 I own (and am owned!) by my Border Collie Fenway (Ch. Tartan Bay Green Monster, UD, RE, AX, MXJ, MXP, MJP, XF, FD, CGCA, ORT). My hobby is antiquing, and naturally I’m on the lookout for anything dog related. One of my treasures is a very old miniature lead toy of a shepherd with his Border Collie. I found this at a small antiques fair on Martha’s Vineyard. The shepherd is holding a crook, and his arm can move up and down. Because my Border Collie began herding after he earned his championship title, I had to have this piece to honor his heritage. 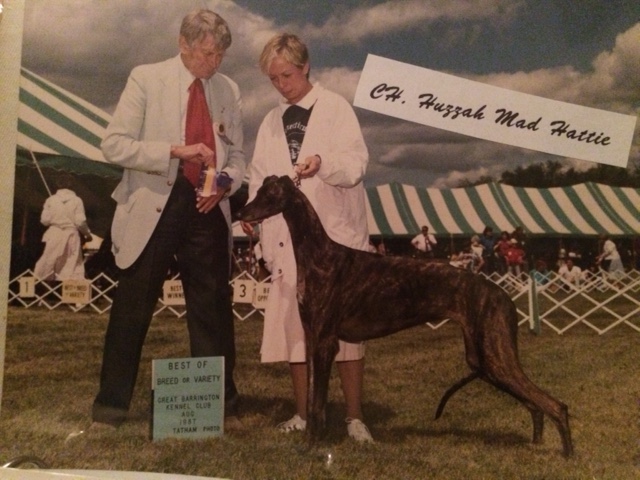 My most treasured possession is an album full of pictures from the early ’90s of the Willomoor Greyhounds with June Matarazzo and me. I would never leave this behind, and it is always out and ready to go. 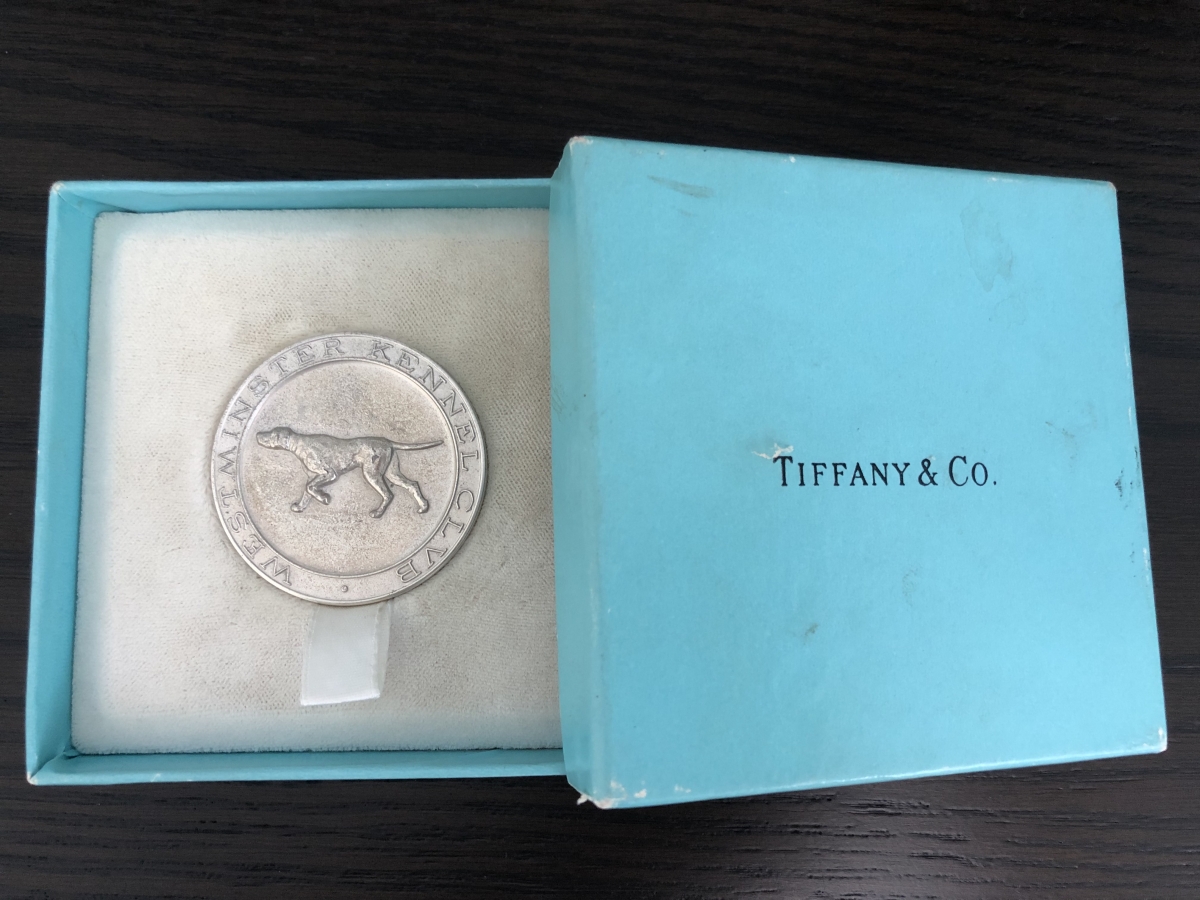 My most precious dog-related possession is a Westminster Kennel Club Best of Breed medallion from 1981. It is still in its original blue Tiffany box with the white velvety insert dulled by time. It was won by our family’s first show dog, a Bearded Collie bitch named Misty, under Melbourne Downing. The breed had been recognized in 1977 and was in the large Working group. While any win at the Garden is exceptional, this win was one I will never forget.

My parents were involved in the breed through the Miscellaneous class and my mom went on to become the BCCA President, but they were not people of means. The trip from Kentucky to NYC was expensive, hiring a handler was expensive, staying in a hotel in Manhattan was expensive. But there is no way they were going to miss showing under Mr. Downing, who we knew loved our bitch.

Our bitch was a very correct and typey import from England (won BOB at the BCCA Nat’l Specialty), but she was not flashy like today’s Beardies. Most importantly, she was my dad’s heart dog. Both my parents were nervous wrecks outside the breed ring, hiding from the dog’s view. My dad, a retired Air Force pilot who did two tours in Vietnam, was shaking so badly that when Misty won the breed, he dropped his Minolta camera to the floor, breaking it, before kneeling on the ground crying tears of joy.

That victory meant so much to them because it was a dream. A dream that their dog, who was really nice, but whom they couldn’t afford to special properly, was going into the Group at the Garden that night.

That WKC medallion was on display in my mom’s china cabinet until she passed away in 2005. There were many silver Revere bowls and platters, too, but I think the little blue box was their favorite. Now it is proudly displayed in my home office and reminds me of my parents, the sacrifices they made for me to compete, their love of the sport, love of a breed and one special day we shared ringside. 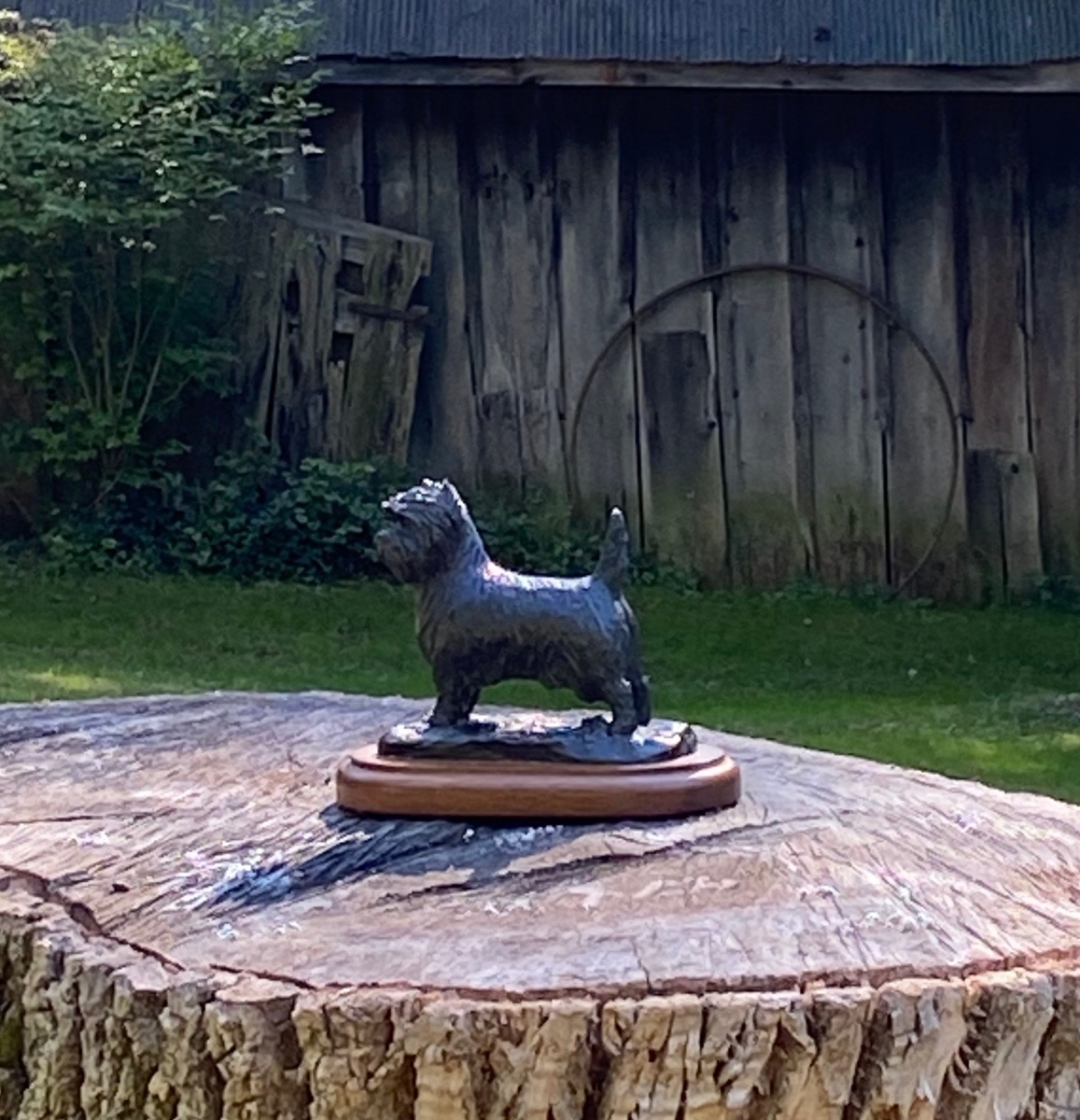 I must mention two items that I would rescue if necessary. One is a wonderful bronze sculpture of the great Cairn Terrier Ch. Cairnwoods Quince, top winner and top sire that belonged to my parents, Taylor and Esther Coleman. The sculptor is Damara Bolte, who knew my parents and had seen Quince in the ring. The original sculpture was cast in sterling silver and is offered in memory of my parents for Best in Sweepstakes at the Cairn Terrier Club of America national specialty.

The second item is an oil painting of my famous Cairn Ch. Caledonian Berry of Wolfpit, a descendant of Quince and also a top winner and sire. It depicts “Groucho” standing in a show pose in front of our brick German Federal style house. The artist is Linda Draper. She was commissioned to do the portrait by a group of my Cairn friends. 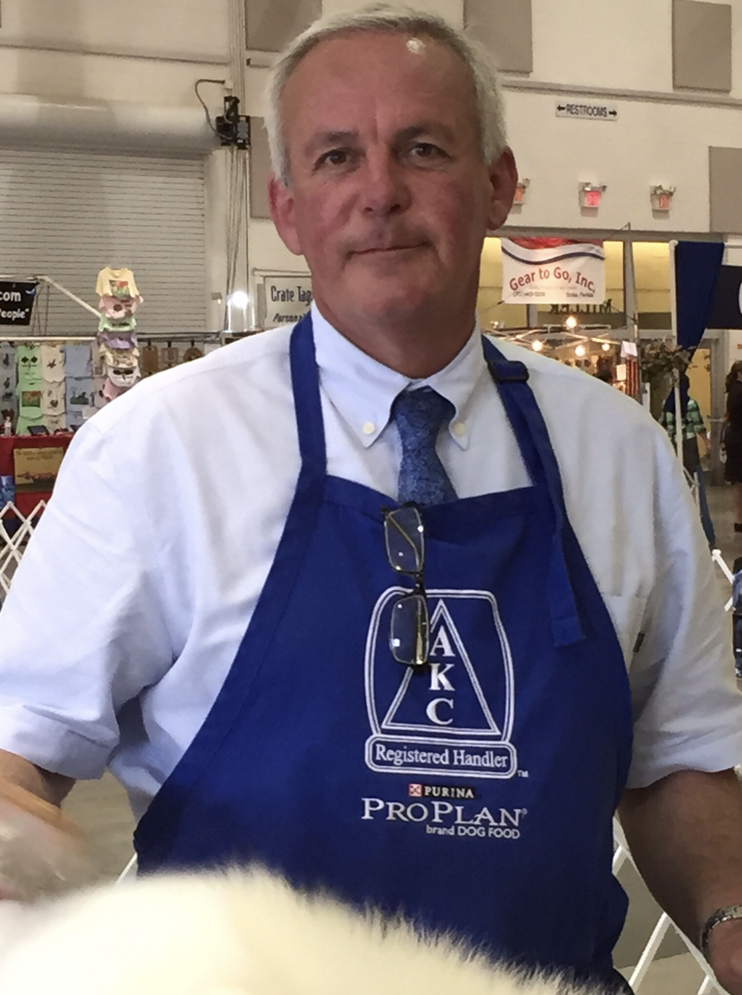 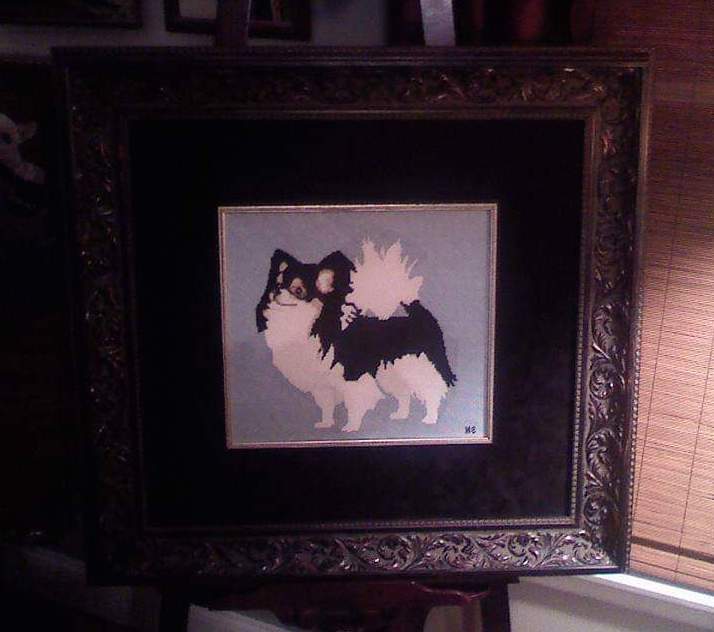 The late Dr. Harry Smith awarded our Ch. Believe It Or Not RJR his first all-breed Best in Show. It was at Harrisburg Kennel Club with more than 3,800 dogs. He later awarded him the breed at the national specialty as a veteran.

When Dr. Harry began to needlepoint, he made a needlepoint of Ripley and sent it to us. Great memories! 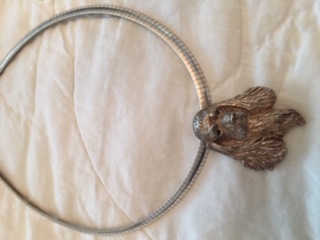 My most prized possession is a beautiful Cocker Spaniel necklace that Marion Lawrence gave to me. What makes this so special is Marion ‘s father had the necklace made for her when she was young. 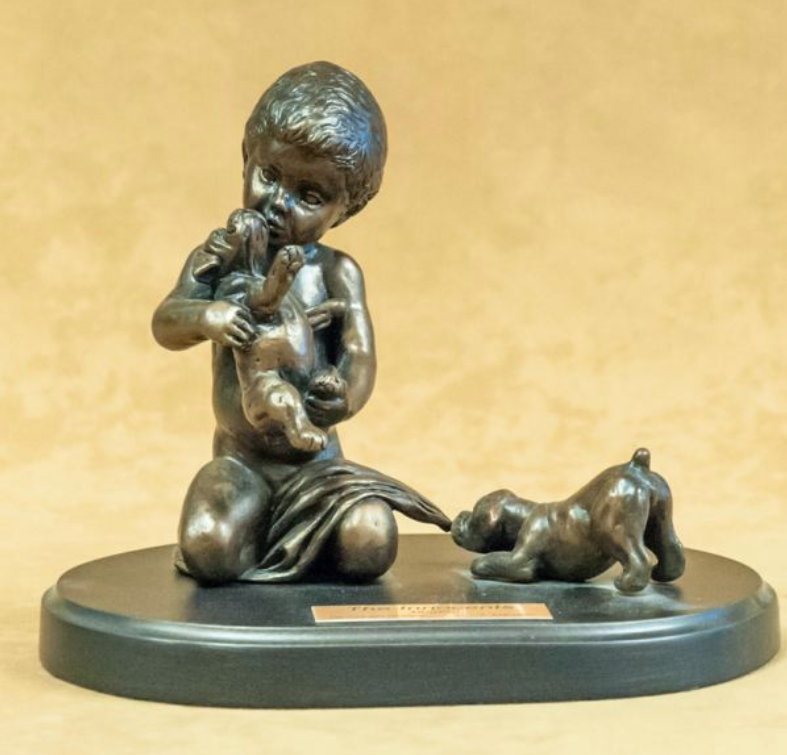 A few years ago while attending the boxer National, I walked past the Danny Quest table. As I do every year, I admire the table and find the pieces I have and the pieces I would love to have. This particular year I spotted a figurine called “The Innocents,” with a little boy playing with puppies. My heart sank because it was a painful reminder of how much I missed my grandson Hunter and the times he would be at the house playing with a litter. My daughter and her family were in Japan for a three-year tour.

I went into the show room and told a dear friend of mine, Debbie Caywood, about the figurine and debated whether or not to get the piece. The next day, as I walked past the table heading to the ring, I noticed it was gone. It brought tears to my eyes, and when I sat next to Debbie, she asked what was wrong. I told her that somebody purchased the figurine of my Hunter. My heart was broken.

I guess the pain in my eyes was too much for Debbie, so she suggested we go to the room for a few minutes and then get some lunch. While in the room, she said she couldn’t bear to see me so saddened. She pulled out a box and handed me the figurine she had planned on giving me later in the week. Although my grandson and other grandkids are all over the country, each time I spot the figurine on the mantel, I am reminded of them, the memories we have shared, and it brings them closer. 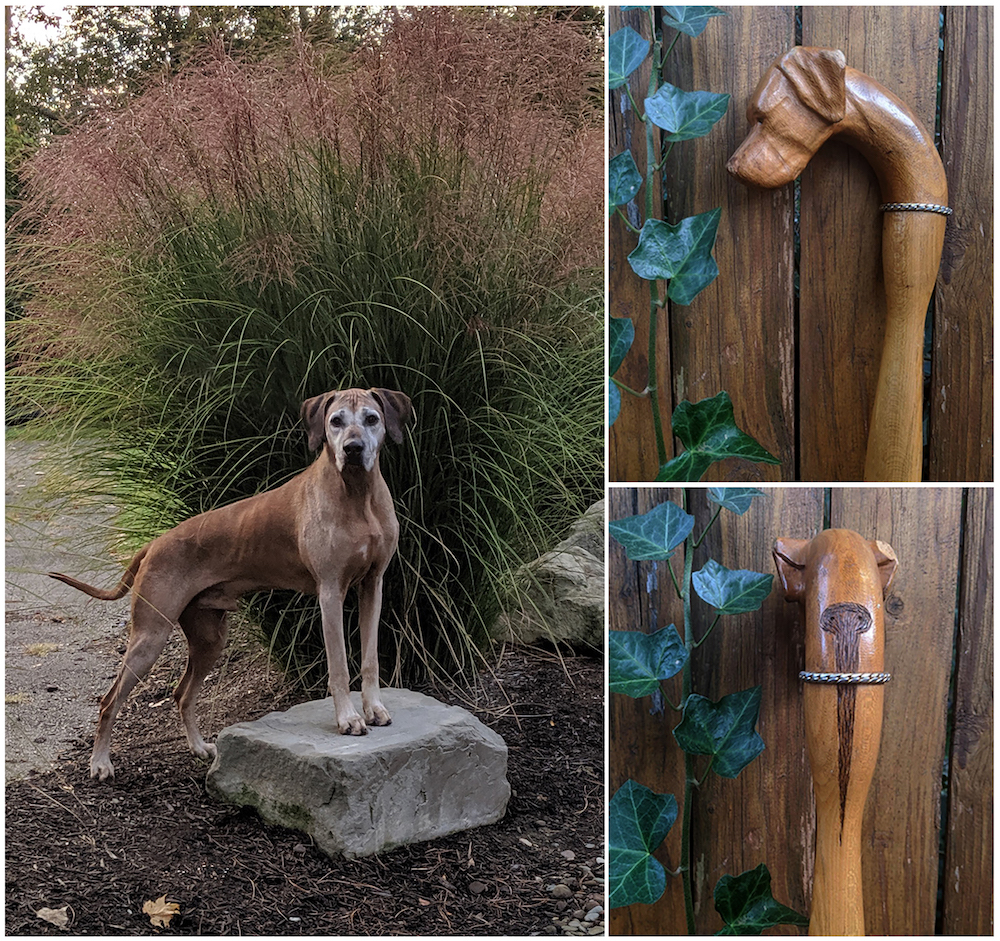 I first met John Rogers of Masai RRs in the mid-’90s. He had a heart of gold and loved to get people together and talk about Rhodesian Ridgebacks. He especially enjoyed showing off his historical photos and interesting trinkets he collected over time. I did not seen him much over the last decade, so it was a wonderful surprise to find him at the 2019 RCCUS National Specialty this past October.

He had a table set up with memorabilia, art and photos from decades past. We spent nearly an hour going through old photos of senior breeders, top-winning dogs and discussing the history behind some of the items he had won or collected. As we chatted he saw me admiring a beautifully carved Ridgeback cane and immediately said, "This is a one of a kind and will be given to the Best Male in Veteran Sweepstakes." I smiled and said, “Well, guess I gotta go win now!”

Later that day, my 9 ½-year-old, won Best Male and Best of Opposite in Veteran Sweepstakes. This win was very sentimental as it was not only a breeder-judge, but my veteran’s one and only National. As I stood on the podium taking our photo, I saw John standing there waiting, with cane in hand, smiling from ear to ear. I immediately ran over and gave him the biggest hug and began to cry.

He looked at me and said, "I could not have given this to a more deserving dog, or person."  John passed away in November 2019. I will treasure this memory, and cane, forever.

© Dog News. This article may not be reposted, reprinted, rewritten, excerpted or otherwise duplicated in any medium without the express written permission of the publisher.
Thu, 09/24/2020 - 11:52pm