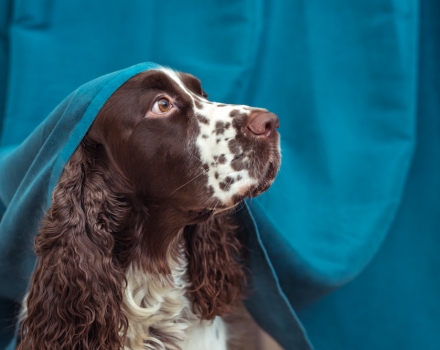 What are your July Fourth plans, and what precautions do they include for keeping your dogs calm and comfortable during the fireworks?
By
Eugene Z. Zaphiris

We start putting the dogs to bed earlier a few days prior to the Fourth of July weekend festivities. The majority of them are our house dogs, but the few who live in the kennel are closed in and sleeping before the fireworks would begin. We also keep a radio going over those nights. They also have a fan noise going to hopefully drown out the noise.

We only have one dog. I put on the air conditioning and the radio, and have the dog wear a ThunderShirt. I don’t know if it helps him, but it helps me.

We are very lucky with Angel, as she is unfazed by the fireworks. Our neighborhood is the capital of major fireworks, as our neighbors who live on the bay and are very macho seem to hold competitions. It's beyond belief. In the past with Roxie and Little Red, we would take them to the movies and try and get home as late as possible, or go away to friends in Massachusetts, where the fireworks weren't too bad. We also tried a ThunderShirt, which helped a little, and cotton in their ears. I wish people would understand that these fireworks do so much harm to all animals and are troublesome to our military men and women as well.

I hold them in my arms and sing them old Jewish folk songs.

Wow, wrong person to ask. We all sat out and watched three neighbors competing for the best show of spectacular fireworks. My hunting dogs, German Shorthair Pointers, love the fireworks. We looked forward to the show: No admission, and I passed out Pupsicles and ice cream. It was so much fun … and last 45 minutes!

We had somebody in our neighborhood set off fireworks every single day, starting on Memorial Day. Each of my dogs had a different reaction. The 11½ year-old Ridgeback didn’t care – he sleeps right through it. The French Bulldog and the Pointer, who are both eight and a half, don’t care if they are outside. If they are inside, the Frenchie wants to protect, and will bark, so we make sure he’s in a separate room. The Pointer stresses, so I spray him with lavender essential oil. With my 8 ½ month-old Ridgeback puppy, I didn’t baby her, and just acted like this was normal. Every once in a while, her ears would pin back, but she was over it in a few days. And by the time July 4th came, she was almost completely desensitized.

In the kennel, we turn up the volume on the radio. In a commercial area, we don’t have a problem.

They are fine. They think it’s our peacocks with a sore throat.

© Dog News. This article may not be reposted, reprinted, rewritten, excerpted or otherwise duplicated in any medium without the express written permission of the publisher.
Sat, 07/03/2021 - 9:25am