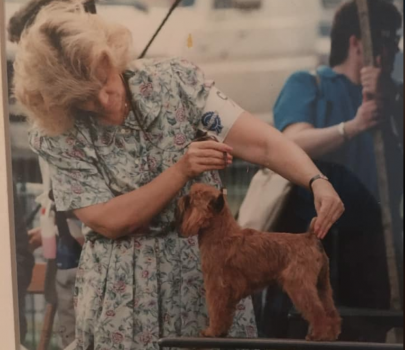 Back in print, question marks about Orlando, Lesley Boyes

It has been said that the dog world is a microcosm of the real world. While there was no one unified clear direction from the federal government on how to deal with this new and deadly virus, that responsibility was handed off to the governors of each individual state to determine how to deal with this virus and subsequently decide what was in their best interests for their constituents. Those decisions, right or wrong, would not be a reflection on the federal government: Blame would be on the governors of each state. Likewise, with no definitive or substantial direction from the American Kennel Club to cancel events until a certain date and then reassess at a future date, individual show-giving clubs had to fend for themselves and make the hard decisions to proceed, cancel or postpone their events. When it became apparent that clubs were starting to cancel at a rapid pace, the American Kennel Club did send a letter of no consequence. As one club canceled, others unsure of what to do or how to do it follow suit, until these cancellations cascaded into a stack of falling dominos.  When it became apparent that this virus was about to affect all of our lives, we decided to suspend the printing of DOG NEWS. It wasn’t an easy decision but a necessary one. Our readers needed to redirect their priorities to protecting themselves and deal with the loss of jobs and income.

So fast forwarding, some show-giving clubs, venturing into the unknown, decided to hold conformation events. Doing something new, with no set of rules or instructions from the American Kennel Club, only those of the local and state governments (as to social distancing and masks), these few clubs ventured forward. There are those exhibitors who welcome the opportunity to attend a dog show and those who feel that they should not attend a function that has that many people present. Everyone is entitled to their opinion and have the choice to attend or not, but what is disturbing is the language and the tone of messages on social media, like Facebook, that saddens us.

Even now as thousands of events have been canceled, the American Kennel Club sends an email promoting their own dog show, promising room for 5,000 dogs. As announced, their December delegates’ meeting will be held remotely on Wednesday, December 2nd, one and a half weeks before their Orlando dog show. The December meeting is usually held with the dog show.  The show relies heavily on their delegates to steward and perform other functions, and a two week isolation policy is in effect for those visiting or leaving the state of Florida, which as of this writing has the highest virus infection rate of any state. Plus their major sponsor has a hold on all employee travel for the rest of 2020. So one has to wonder if it is a bit ambitious for this event to be held. Time will tell.

With the resumption of several dog shows being held across the country, we will now publish every other week until such time as the dog shows are held on a regular basis. As in the past, we look forward to bringing all the latest news and opinions from our stellar columnists. Even putting this issue together, without the benefit of telephones for the last week, due to the remnants of Isais, it’s still great to be back at work.

DOG NEWS, like the rest of our community, has lost a giant with the passing of Lesley A. Boyes. A second generation breeder, her family were world famous Kerry Blue Terrier breeders. Married to two professional handlers, Ric Chashoudian and Eddie Boyes, she learned from the best. Her breed of choice was Brussels Griffons, making her mark with the then top winner Charlie Brown. From the founding of DOG NEWS, Lesley wore several hats, from asking trivia questions, click pictures and a major supporter. On a more personal note, she and Eddie and their three sons C.R., Derek and Bryan were family to Matthew Stander and myself. The loss of Matt and Lesley is a devastating loss. We send our love and deepest sympathies to the entire Boyes family and Lesley’s many friends from around the world. Rest in peace, my dear friend, you will be missed, truly “One of a kind.”

© Dog News. This article may not be reposted, reprinted, rewritten, excerpted or otherwise duplicated in any medium without the express written permission of the publisher.
Thu, 08/13/2020 - 12:26pm