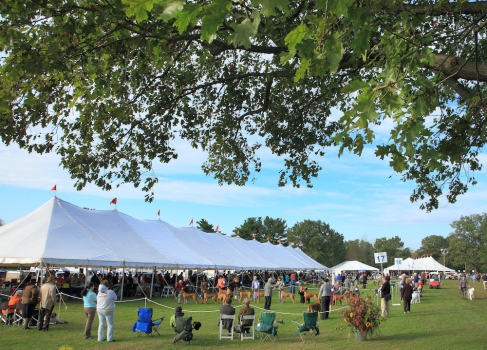 Last week’s Dog News editorial discussed some of the history of Mrs. Geraldine Rockefeller Dodge and her Morris & Essex Kennel Club Dog Show. For 20 years, that show was the talk and envy of the dog world here in the United States and around the world. With its multiple thousands of entries, it also hosted more than 50,000 spectators.

That editorial also mentioned her establishing and funding of the St. Hubert's Giralda shelter for homeless dogs, endowed by Mrs. Dodge with several million dollars upon her death in 1973. It is still to this day the living legacy of Mrs. Dodge. Now rewind more than 20 years ago from the present day, when current board members of St. Hubert's Giralda were brainstorming on how to raise money from the charity. It was decided to try and re-create as best we could the long-admired and respected Morris & Essex Kennel Club in memory of Mrs. Dodge. And so it was put into motion with the first executive committee with president the late C. Freeman Ayers and vice president and show chairman Wayne Ferguson along with Dorothy Collier, Ron Menaker, Carol Brown, Ralph Del Deo, David Helming, James McTernan, Eugene Zaphiris and Giralda employee Elizabeth McCorkle. To make the show unique in every way possible and not privy to any large sum of money, it was decided to hold the event every five years and return any profits to St. Huberts Giralda.

So many meetings and man hours were spent on how best to recreate this monumental event. While everyone did their assigned duties, two names stand out: Wayne Ferguson and David Helming for their tireless work in scouting potential venues for the show. Once it was well into the planning stage and a date was decided – Montgomery County weekend – we opened up membership to the Morris & Essex Kennel Club with a response that was overwhelming. Solicitations were made for monies to pay for an undertaking this large.

The fancy rallied to support this event and so on October 5, 2000, the first return of the Morris & Essex Kennel Club dog show was held.

Hugely successful beyond our wildest dreams, it brought back some of the glamour lost in the ensuing years. Exhibitors dressed up, ladies and gentlemen wore hats, and the atmosphere was palpable. Today our membership is comprised of a Who’s Who in American dogdom and a compliment of foreign members.

So now we come to our fifth event, sadly postponed one year because of the Covid-19 pandemic, to be held on Wednesday, October 6, 2021. With Wayne Ferguson still at the helm, we have the same enthusiasm and expectation of reprising the most unique dog show in the United States with another record entry. The club looks forward to seeing you there, whether you are exhibiting, judging, stewarding or just spectating. Join the fun and wear a hat. See you there.

© Dog News. This article may not be reposted, reprinted, rewritten, excerpted or otherwise duplicated in any medium without the express written permission of the publisher.
Thu, 08/19/2021 - 9:08am