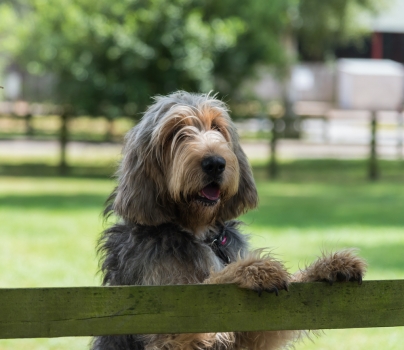 Otterhound fanciers are freezing semen with their parent club in an attempt to keep this rare breed viable.

Semen … Mine, Yours or Theirs

Modern science has made it easier to breed livestock – and humans, for that matter.

We in the purebred-dog community freeze semen regularly. But the question arises: Have you made provisions for these collections after you have passed away? We all make plans to take care of the live animals in our care and even material things, but somehow – out of sight, out of mind – frozen semen is neglected in that process.

Sadly, if not properly left in writing as to the dog’s name, amount of semen in storage, payment information and the recipient of your choice, the end result is it will be destroyed for non-payment or the collecting agent will keep the semen for themselves. The point being, it is semen from your dog, and how you choose for it to be used or inherited should be left up to you and not someone else.

This very topic was brought up at the May board of directors meeting, at which Chief Operating Officer Dennis Sprung asked a member of the board to work with staff and delegates to investigate how the American Kennel Club could play a more active role in the preservation of purebred semen. In 2017 the board voted to allow, with American Kennel Club board approval, a parent-club-sponsored, breed-specific frozen-semen bank to own frozen semen and to apply for frozen-semen litter registration as a semen owner provided all other requirements to register the litter were met.

This committee selected by the American Kennel Club discussed the establishment of a Purebred Preservation Bank that the American Kennel Club would own and the semen stored therein. Some parent clubs like the Otterhound Club of America have established the Otterhound Club of America Reproduction Bank, Inc. to collect, store and distribute reproductive material from Otterhounds. Other parent clubs are researching the establishment of similar entities. This could be a remedy for breeds that are endangered. But many questions would have to be answered when giving away ownership of one’s own dog’s semen, and not having a voice in who uses it.

Decisions need to be made: Are you responsible for who inherits these valuable vials (straws) of collected semen? Should it be left to the parent club to decide who uses these vials? Or should the American Kennel Club own and decide who gets to use the vials?

Your input in this matter is important, and so this topic will be the next issue’s Question of the Week. We eagerly look forward to your comments.

© Dog News. This article may not be reposted, reprinted, rewritten, excerpted or otherwise duplicated in any medium without the express written permission of the publisher.
Wed, 07/14/2021 - 1:29pm