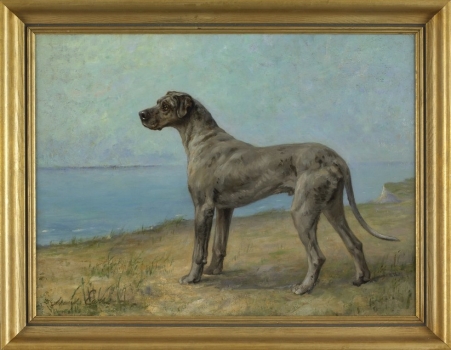 "Great Dane Standing at the Shore," Maud Earl. Gift of the estate of Nancy-Carroll Draper to the AKC Museum of the Dog.

The Dog Museum at 40

In 1982, the AKC Museum of the Dog opened with much fanfare. The original site was the lobby of 51 Madison Avenue, the former home of the American Kennel Club. To enlist financial and art contributions, many well-known fanciers of that time, like Lou Auslander and Gayle Bontecou, among others, were asked to contact friends in their respective areas of the country. Some readily agreed; others were not really skeptical but wanted more information about the who, what and where of this new and unique venture. Early contributors like Marie Moore gave valuable and unique pieces of dog art that included her beloved Mastiffs, as did Great Dane breeder and exhibitor Nancy Carol Draper, and Poodle handler and judge Frank Sabella donated works that he owned and some left to him by fellow Poodle fanciers and judges Tom and Ann Stevenson. It did take some time to really get going. There were the usual fits and starts with something new. Then, as the story goes, former American Kennel Club chairman William Rockefeller decided he didn't want the dog museum in the lobby of the American Kennel Club headquarters at 51 Madison, and so it was banished. Many discussions were held as to the future and new location of the museum. While it was thought it should remain in a large populated area, that was not to be. By this time Dorothy Welsh was heading the museum. Dorothy and the County of St. Louis worked a long-term lease for Jarvis House in Queeny Park in St. Louis, Missouri. The long-term lease that was agreed upon had an annual rent of $1. With this move, the profile of the board changed, and there was a give and take about the location and the future of the museum. But the nominal cost of the operation always put a potential move on the back burner. The Jarvis House in Queeny Park was a very pretty location, but, sadly, geographically undesirable. Because the cost was less than minimal, the museum hung suspended at that location for more than 30 years. But there was always a back-burner wish that the museum would move to a major city, even return to New York City. Thanks to the hard work of board chairman Ron Menaker and American Kennel Club president Dennis Sprung, with a little arm twisting the seed was planted and eventually flourished. Now here we are, 40 years later, celebrating something so important to our sport and history. Going full circle, the AKC Museum of the Dog is once again in the same building as the headquarters of the American Kennel Club. It opened its doors on February 14, 2019. As we celebrate 40 years, there is a new exhibition titled “The AKC Museum of the Dog at 40 and the Collectors Who Made It.”

Following the pandemic, the museum should be supported by your physical presence and your gifts of artwork and donations. Happy 40th birthday.

© Dog News. This article may not be reposted, reprinted, rewritten, excerpted or otherwise duplicated in any medium without the express written permission of the publisher.
Fri, 09/23/2022 - 9:10pm