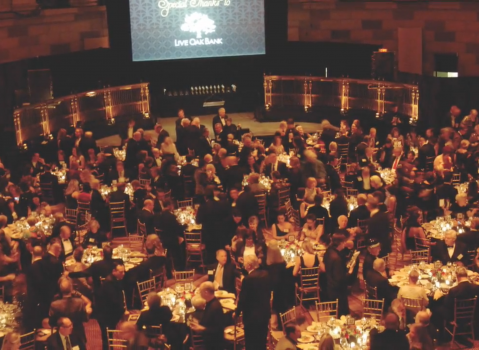 What's behind the door at Gotham Hall? The sport's most hotly anticipated awards dinner, natch.

Awards – Theirs and Ours and Well Deserved

Award season is getting into full swing in many different areas – sports, theater, television and dog shows. We watched the Emmy Awards, which were presented on Sunday evening, September 19, with interest. With some hotly contested categories, we wondered: What is the ultimate criterion in voting for the winner? Obviously, all the nominees excelled in their respective fields, be it athlete, actor or author. There are many people who are worthy of receiving awards for their work. The selection is always a difficult process with many worthy contenders, but only a handful are nominated. Final voting is always a bit easier, as the selection is not as large as the field from which they came.

Bringing this process closer to home, on October 15, members of our sport will be voting for their top picks in the various categories. With that in mind, the annual Purina Pro Plan Show Dogs of the Year Awards Partnered with Dog News has contacted the nominees for the 2021 awards for Breeder of the Year, Owner Handler of the Year, Professional Handler of the Year and Judge of the Year. The previous winners in each category – Breeder of the Year Karen Staudt-Cartabona, Owner Handler of the Year Linda Souza, Professional Handler of the Year Marcelo Chagas and Judge of the Year Donald Sturz – were consulted on this year’s nominees. Great care was given by these former winners in each of the categories, and their selections were well thought out. Some of their selections were former winners who gracefully declined so that others could be nominated. We thank them for their generosity and good sportsmanship in declining their nominations. Plus we are grateful for the time and energy the former winners put into their decision making. The voting will commence online on Friday, October 15. Photos and biographies will also be available in the Friday, October 15, issue of Dog News and all of our social-media platforms. The voting will end on Wednesday, December 1. The winners will be announced at the annual black-tie dinner on Sunday evening, January 23, where 2021’s number-one dogs in each Variety Group, along with the number-one Junior Handler and top Obedience Dog, will be honored. The newest member of Hall of Fame will also be inducted and honored. Because of the canceled dinner in 2021, we will also be honoring the seven Top Dogs in each variety group for 2020. We hope you participate in this voting process and support your favorite nominees. Remember to vote!

© Dog News. This article may not be reposted, reprinted, rewritten, excerpted or otherwise duplicated in any medium without the express written permission of the publisher.
Mon, 09/20/2021 - 11:11am