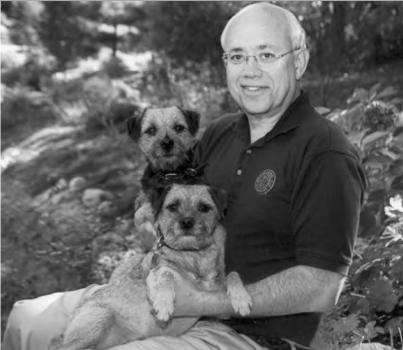 This week’s Dog News editorial highlights two giants in the sport of purebred dogs. Frank T. Sabella and Ronald H. Menaker came to the sport in very different fashions. While both were New York City born and bred, their paths didn’t cross for many years. But both paths led to greatness.

Sadly, we lost Frank this week following a long illness. He had moved from Florida to Las Vegas to be close to his beloved sister and her family. The man Frank Sabella combined knowledge, talent, good looks and charm to become one of the greats of our sport. His opinion in any breed was sought after, and he was one of those you would let buy a dog for you sight unseen.

Frank lived a great life, wanting for nothing. His start from humble beginnings to a full, rich and satisfying life, encouraged by good friends along the way, is all one could want. With a move to California and his handling career in high gear, Frank won more than his fair share, competing with the likes of the Sangster brothers, Porter Washington, Jimmy Butler, Ric Chashoudian, Eddie Boyes, Kay Finch, Pat Trotter, and Nat and Gloria Reese with Corky Vroom. Winning in those heady days of stiff California competition was quite an accomplishment. Frank rose to the occasion. In 1973, he handled the headstrong stallion of a white Standard Poodle, Ch. Acadia Command Performance, owned by Edward B. Jenner and Jo Ann Sering, to Best in Show at the Westminster Kennel Club under the esteemed judge Mrs. Adelaide Riggs.

Retiring from handling, he became a much-sought-after judge. No ego involved in his judging career; he only judged four groups because that’s what interested him. He didn’t need an all-breed-judge label to feel fulfilled or to prove his worth. He returned to the Westminster Kennel Club Best in Show ring in 1990 as the Best in Show judge, awarding the Pekingese Ch. Wendessa Crown Prince, owned by Edward B. Jenner and handled by Luc Boileau. Frank judged around the world and was called on to lecture on many breeds.

He was at times our adversary, but through all that we were and remained closed friends, with the same wants and desires for the success of our sport. We will miss him, but are so much better for knowing him. It gives me solace to think that Matt, Annie and Frank are somewhere together, letting it rip. Rest in peace, my friend.

Ron’s ascent to greatness started as a family of four that loved dogs. The Menakers owned Bedlington Terriers (a Rockefeller family favorite), Giant Schnauzers, Norfolk and finally Border terriers. Working at JP Morgan Bank, he was friends with Roddy Lindsay, a member of the Westminster Kennel Club. Through their friendship Ron was invited to become a member.

Moving up in the club, Ron became show chairman, a high-profile position that has a lot of power. From there, a delegate’s seat, and soon people were aware of his street smarts, his business acumen, and his association with bold-face names in industry and government. Becoming chairman of the Board of Directors was an easy transformation. Ron took those skills – plus his keep you friends close and your enemies closer philosophy – to great heights. He was a hands-on chairman, going to the office daily and looking into every aspect of the organization. He brought in top people in their fields to help streamline things like health insurance, pensions and other inefficient money matters. He was responsible for the million of dollars now held in the kennel-club savings. Following his years at Westminster, he took that knowledge and created the AKC National Championship, bringing in the international competition that ultimately went back to Europe after he built it into such a success.

Always juggling ten oranges in the air at once, Ron was also the chairman of the board of the Beekman-Downtown Hospital, the hospital closest to the Word Trade Center on that dreadful day. But the one thing that eluded Ron was becoming a medical doctor. His love of medicine was so great that Gene Zaphiris named him Dr. Bombay for his willingness to diagnosis any illness you might have and the proper medication. I warmly remember the Ass of Athens on one those occasions. His medical asset was that he knew many of the top doctors in New York through his work at the hospital, and could get you an appointment immediately with doctors who had patients waiting for months to be seen.

Through all that, Ron’s dedication to the Dog Museum was second to none. His organized the yearly theater benefit; even when met with unhappiness from the powers that be, he forged ahead and made it special. Thanks to help from Barbara Von Bostel, Paula Specter and Dog News, it was a yearly sell-out.

Which brings us to this past weekend’s AKC Museum of the Dog Virtual Gala Honoring Ron Menaker. A great name to use to raise money for the museum, and a testament to his hard work that more than $250,000 was raised that evening.

Sadly, owing to ill health, Ron did not appear at the Gala. We will leave critiquing of the evening to others, but waiting this long to honor Ron was like eating cold pizza – still delicious, but much better served hot and on time.

© Dog News. This article may not be reposted, reprinted, rewritten, excerpted or otherwise duplicated in any medium without the express written permission of the publisher.
Thu, 02/18/2021 - 6:10am