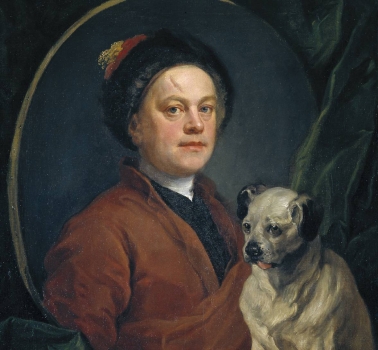 The main character in this feature is named “Trump,” perhaps not appropriate at this time. Anyway, here goes.

William Hogarth was born in London in 1697, spent most of his life there, and died in 1764. He was an English painter, printmaker, pictorial satirist, social critic and editorial cartoonist. To add to the list, he was given the Fellowship of the Royal Society for the Encouragement of Art, Manufacturers and Commerce – FRSA. He is best remembered for his art, but also for his outstanding achievements toward social progress and development. A controversial figure in the London art scene, he was the son of a scholar who, through his art, championed the cause of the less privileged and who mixed with, and at times challenged, the establishment. 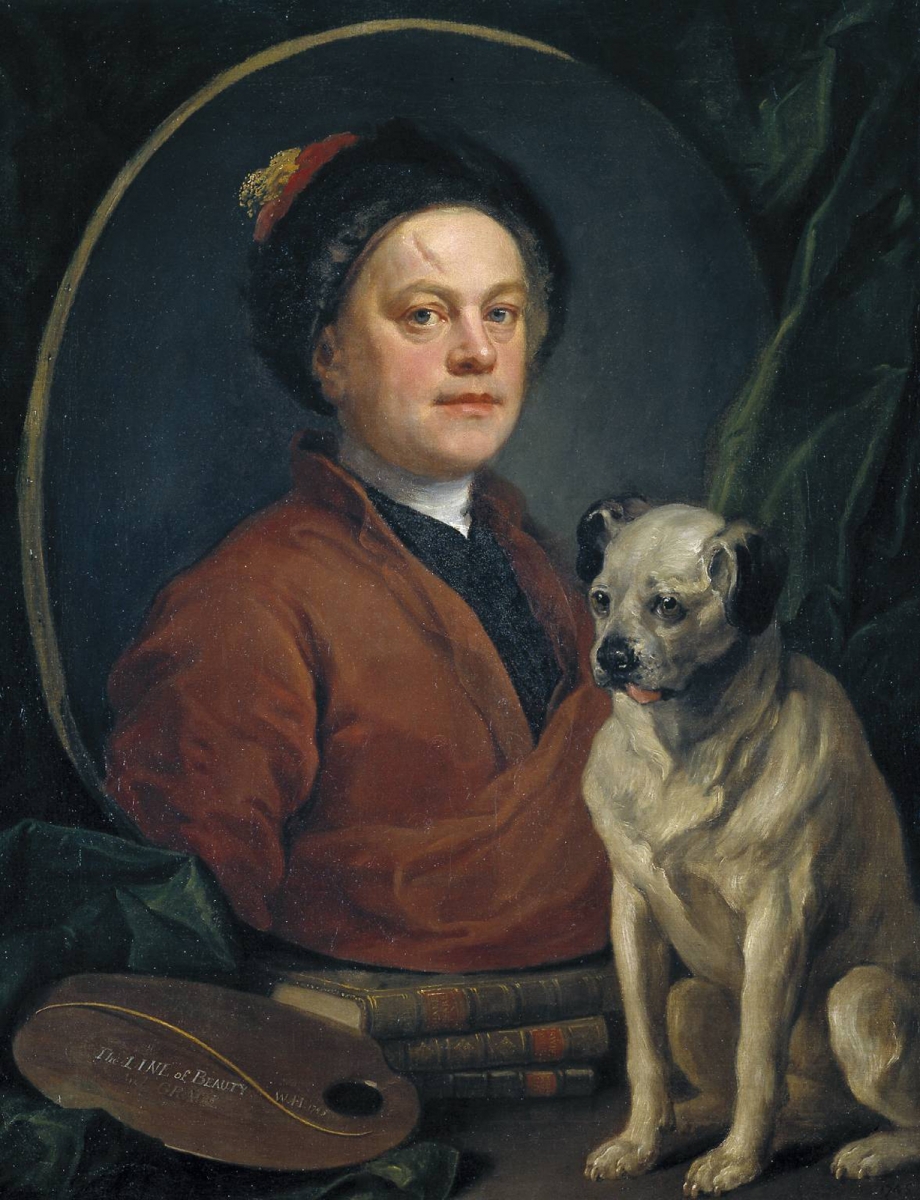 The painter Sir Edwin Landseer RA lent his name to the white and black Newfoundland, whereas the Pug lent its name to Hogarth’s moniker, “The Puggy Painter,” given by his critics because of his short stature and pugnacious character.

Hogarth had three Pugs in succession as pets. In choosing the breed, the society breed, maybe in some way he was making a statement on where he thought his real social standing lay and how he should be judged. One of his Pugs he named Pugg, and this one was possibly the first. In a December 1730 advertisement in “The Craftsman,” Hogarth sought the dog’s return and offered half a guinea reward. The two other Pugs he owned were named Pompey and Trump, the latter buried in the garden of his master’s home in Chiswick.

Hogarth’s portrait of one of his Pugs, always attributed to Trump, is one of the best known of all portraits from the 18th Century in which a dog appears. It was possibly the artist’s most loved work. In the picture Trump sits in front of the artist’s self-portrait in an oval frame, which is resting on volumes of three authors Hogarth admired the most – Shakespeare, Swift and Milton. Painted in 1745, it was signed and inscribed “W.H. 1745” on a palette bottom left of the picture. It was bought by the National Gallery in 1824 and transferred to the Tate Gallery in 1951.

The question “Was Trump indeed a purebred Pug or not?” has been asked many times, and in all probability the jury is still out.

Clifford L. B. Hubbard in his “Dogs of Britain” (1948), dubbed the dog “a mongrel of smooth-coated Terrier design.” Wilhelmine Swainston-Goodger in “The Pug Handbook” (1959) disparagingly wrote “a mongrel if ever there was one,” and Susan Graham Weall described Trump as “of no particular beauty.”

A line engraving by Hogarth of Trump’s picture, self-published in 1749, was followed in the same year by a mezzotint copy by Charles Spooner of Dublin. A further engraving, this time by Benjamin Smith, was published in 1795, when the picture was still in the collection of John and James Boydell. John had acquired it at auction in 1790 when it was sold by Mary Lewis. She had inherited from her cousin, Hogarth’s wife Jane, who was the daughter of the artist Sir James Thornhill. 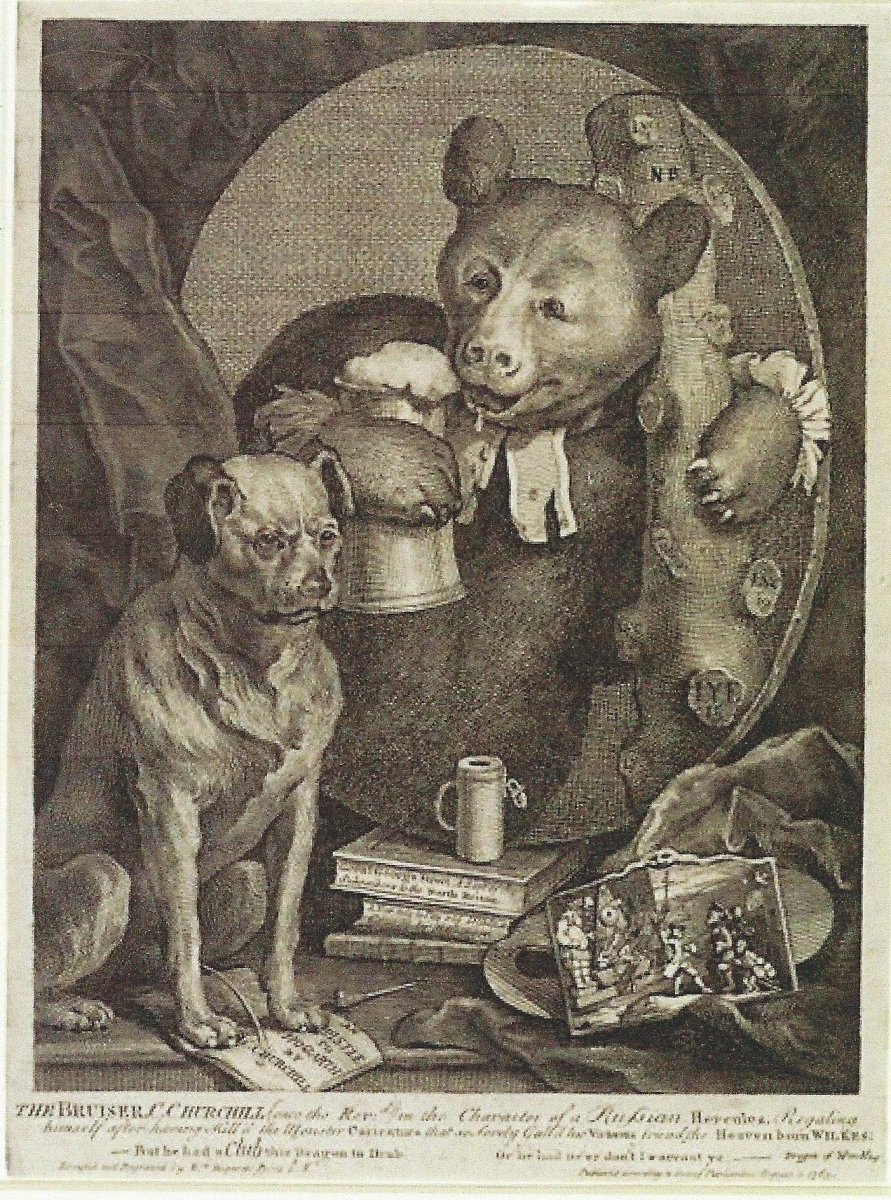 Following a quarrel with William Hogarth, clergyman and satirical poet Charles Churchill penned his lengthy “An Epistle to William Hogarth” in 1763. Hogarth responded by turning the copper plate that already carried his engraved “self-portrait” into a cartoon directed against Churchill. He burnished out the details and replaced them with the depiction of Churchill as a drunken, drooling performing bear, wearing a ripped clerical neck-band, clasping a pot of porter in one paw and an unwieldly club – the club of satire – in another. Meanwhile, Hogarth’s Pug now comes to stand for the artist himself, contemptuously urinating on a copy of Churchill’s poem.

In a later version Hogarth introduces lower right what he called “a new Petit-Piece,” an engraving within an engraving that shows the artist whipping into line Churchill (the dancing bear) and another of Hogarth’s critics, John Wilkes (the monkey).

An unsigned painting hanging in the Kennel Club in London attributed to Hogarth, and said to be Trump, shows a very different dog from the one in the self-portrait. Unlike the picture in the Tate, the dog in the Kennel Club’s picture has cropped ears, and Susan Graham Weall in her book suggests that the dog “may possibly be Pompey.” The balance of this picture suggests that the dog was once part of a much larger painting.

Trump, as depicted by Hogarth, became the inspiration for a number of sculptures and models. Considered the most important of these and from which others sprang was a terracotta by a French sculptor working in England, Louis François Roubillac (1702-1762). Now lost, this remained with Hogarth’s widow until her death in 1790. 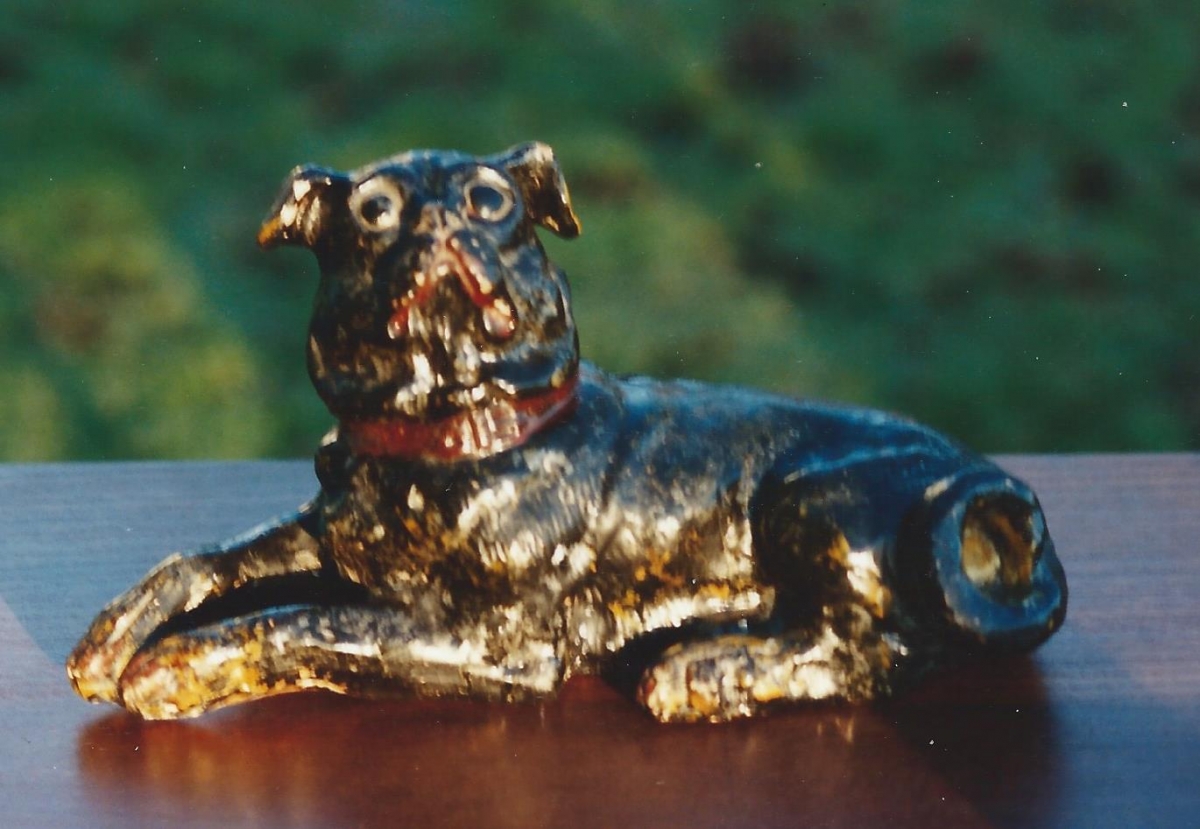 Staffordshire potter Josiah Wedgwood made a version in black basalt from a plaster mold sold from Roubillac’s studio; Chelsea and Nymphenburg also produced a version and more recently a Russian terracotta circa 1910 with rather scary glass eyes. Two London Stoneware models by William Murray dated 1815 and 1816 were sold by Bonhams in London last September for £612. 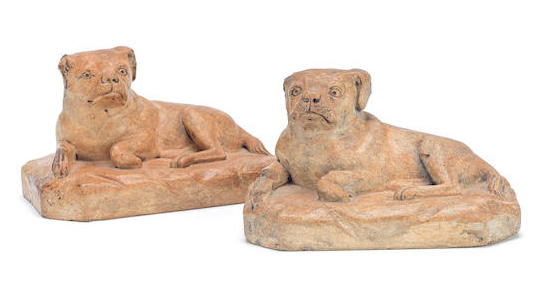 Hogarth identified strongly with Pugs and as a result was himself depicted as Trump in “Pug’s Graces,” a caricature of 1753 by watercolor painter Paul Sandby (1730-1802). 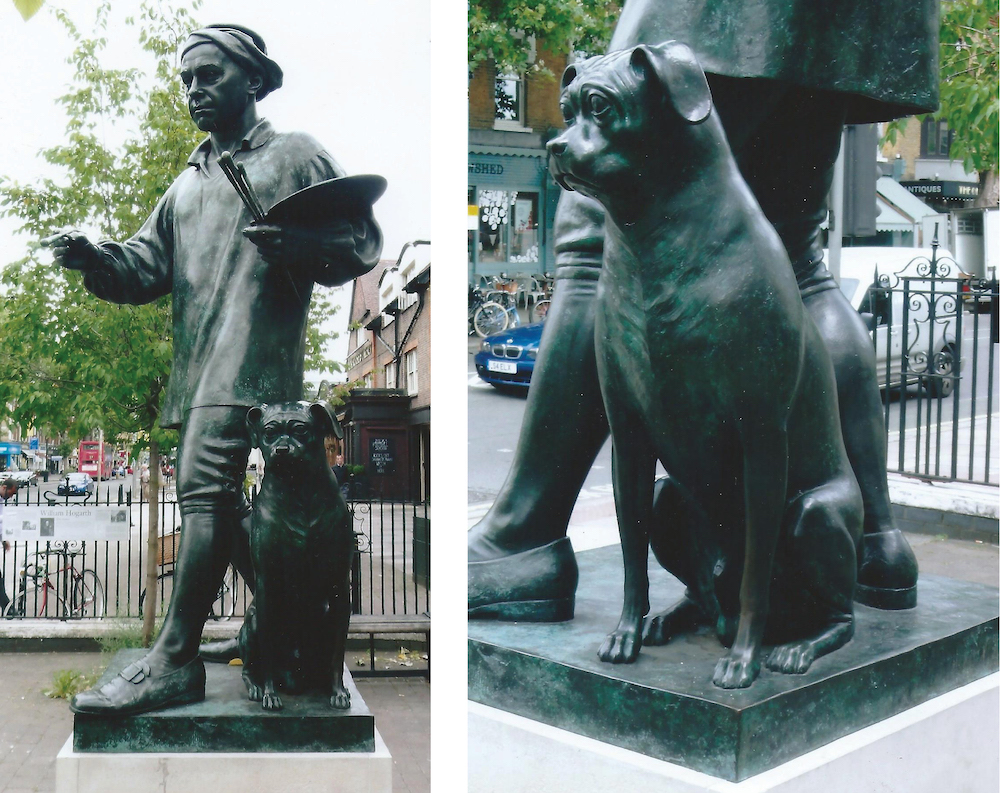 In the west of London, on the corner of Turnham Green and Chiswick High Road, near where Hogarth lived, is a bronze statue of the artist holding a palette with a rather large Trump sitting by his side. Commissioned by the local community, it was sculpted by Jim Mathieson (1931-2003) and unveiled by David Hockney and Ian Hislop in October 2001. It was a late decision of the steering committee to add Trump to the statue, and his maquette appeared at fundraising events for the work.

© Dog News. This article may not be reposted, reprinted, rewritten, excerpted or otherwise duplicated in any medium without the express written permission of the publisher.
Tue, 03/09/2021 - 9:55pm