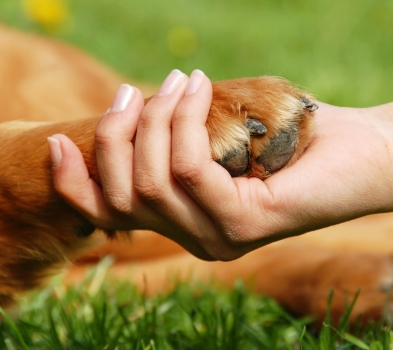 Sooner or later, you're going to have to
By
M.J. Nelson

For almost 60 years, a staple of daytime television in the U.S. has been a game/comedy show created in 1963 by Monty Hall, “Let’s Make a Deal.”

The program’s format involves traders making deals with the host. If you substitute “dog” for “trader” and “owner” for “host,” it sounds much like the format for a lot of dog-training situations, especially when issues arise in that training.

I trained retrievers and pointing breeds for many years, and still train retrievers. While it took a few years, since I can be as hard-headed on occasion as some of my dogs were said to be, I’ve discovered that there is only one absolute training principle: That is that each and every dog is different, and with almost every dog, sooner or later, you’ll have to make some sort of a deal.

This statement is likely to make the dog-training hard-liners howl: “The day I cut a deal with a dog is the day hell freezes over.” Of course, these are the same folks who are not satisfied until they have “robodog.” But it’s a pretty safe bet that people who are flexible in their attitude and training methods and are not overly concerned if their dog’s work doesn’t conform precisely to what I call “performance rules” wind up with both happier dogs and with their blood pressure in normal ranges.

Need an example? My retrievers and pointers have all been trained to deliver birds to hand by coming immediately to the heel position and sitting by my side. After repeated attempts in obedience training to get them to sit in front with the dumbbell or articles did nothing but totally confuse the dogs and frustrate me, I finally said “Thehellwithit, we’ll take the point deductions. The objective here is the green ribbon,” and made a deal with my dogs: If they’d do the other exercises the way I wanted them done, I’d stop nagging them about their delivery position for the dumbbell, articles or gloves.

Guess what? My dogs wound up with exactly the same titles behind their names as the dogs that scored 200 points, and they were much happier about doing obedience once they weren’t being scolded or corrected for delivering the article in exactly the way they absolutely knew was the right way to deliver something to hand.

Need another example? My dogs love to take a parade lap when they have succeeded in finding and fetching a bird. Now, I’ll confess that I have never really understood why anyone would be bothered by a dog that wants to show off a little. Why would a person want to deny someone who had done something special the means to show that they were proud of their work? It’s no different for the dogs. They are proud of a job done well, so why not let them show it?

Of course, if they took a parade lap on every bird, it could interfere on multiple marks with their ability to complete the job. So, again, I made a deal with them. If I said, “Here, heel,” when they returned with a bird, they knew the job wasn’t finished. If I said, “Awright”or “Good, boy/girl,” they had the necessary clearance to prance around a bit. That all my dogs have earned advanced hunt-test titles as well as successfully retrieved hundreds of ducks, geese, pheasants and quail is a pretty good indication that while they may not always have conformed to the “performance rules,” it didn’t interfere with their ability to get the job done.

While it’s perfectly fine and, in fact, laudable, to strive for the very best possible performance you can get from your dog, if Fido is not in total compliance with the unwritten and frequently arbitrary and capricious “performance rules,” rules which change according to whatever happens to be the fashion trend for field or performance events at any given time, it is not worth starting World War III with your dog. When a dog deviates from these “rules,” it is important to keep the primary objective uppermost in your mind before you do anything about it, which is, “Does the dog’s behavior interfere substantially with its ability to get the job done?” If the answer to that question is “No,” then your insistence on conformity to those arbitrary “rules” is only to satisfy your own ego.

If you have a Sporting breed, Standard Poodle or Airedale, for example, and your hunting partners are anything like mine, they don’t care how the dog looks. All they care about is whether the dog does the basic work of a hunting dog. In other words, they are highly impressed by dogs that find birds, flush them or point them and bring them back when the shooter is on target. The same is true for Sighthounds that run down their quarry, Scenthounds that can snuffle out their game, Terriers that are scourges to rodents, Working dogs that happily haul carts or sleds, escort horses, guard livestock or rescue swimmers, herding dogs that show they can safely move livestock to wherever the shepherd or drover wants that stock to be, agility dogs that stay on course and handle all the obstacles, or obedience and rally dogs that can do the exercises. If the dog is getting whatever job done efficiently, with minimal effort or interference, also known as “shouting,” or with you having to resort to using “dog language,” the sensible thing to do is leave him alone and let him do it. The dogs don’t care how it looks, and neither should the owner or handler.

It’s a different story if what the dog is doing is compromising its ability in the field or the performance arena to the point where it is not an effective hunting dog/courser/rodent hunter/herding dog or whatever performance activity you are doing. Then, clearly, something, has to be done about it.

But if you are obsessed with making the dog do something in a certain way with absolutely no deviations — even if those deviations have no real effect on the end result — then you are the one with the problem, not the dog. 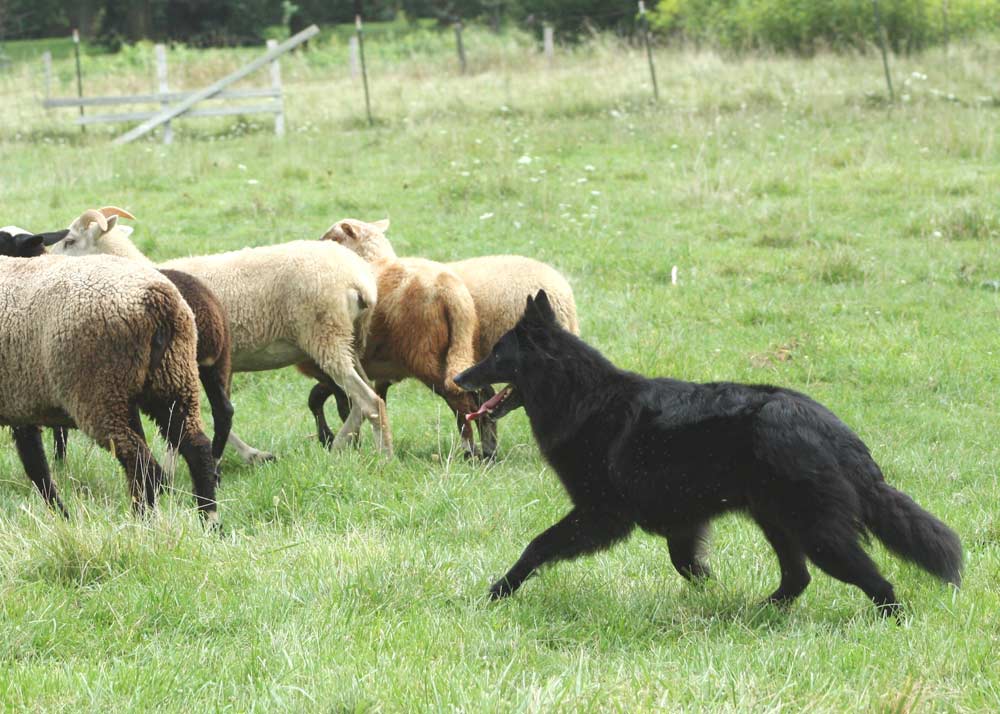 For the Belgian Sheepdog, “down” while herding was something he hated so much that getting him to do it caused him shut down and become mechanical. The solution was for his owner to accept a standing stop, which she found preferable to a bad attitude.

I interviewed a lady not long ago whose Belgian Sheepdog was getting very close to finishing his herding championship, which would make him a dual champion, a remarkable achievement for any breed. But there was a time early in his training when she despaired that he’d ever get any herding title, let alone be nearing his HC. Getting him to “down” while working stock was almost impossible. He didn’t want to do it, and if she was able to get him into a down position while working stock, he’d immediately spring back up again, which spooked whatever they were attempting to move.

The dog’s owner said she tried all the conventional techniques to get a proper down while herding, but all that she got was a dog that would shut down and become mechanical. The dog wouldn’t think for himself and would wait for a command in every situation. Even worse, he would turn and face her on the “down” command instead of keeping an eye on the stock. Finally, she said, she realized she was ramming her head against a brick wall. So, she made a deal with the dog, and that was that a standing stop was acceptable. The only time the dog had to “down” was when the livestock was “static,” meaning the stock was in a holding pen or something similar. Like many trainers in this situation, the Belgian Sheepdog owner discovered that she could live with something, in this case a standing stop instead of a “down,” but she couldn’t live with a bad attitude.

The need to cut a deal can happen in just about any dog sport. A man who does tracking with his Weimaraners in addition to hunting with them said he had a dog that loved tracking but viewed the articles left on the track as irrelevant. His first solution was to make the dog sit at the articles, but all that did was create a more serious issue. The dog actually started “blinking,” refusing to acknowledge that there was an article present. The Weim’s owner said he was about ready to abandon trying to track with his dog when he discovered that if they waited until it was dark to train on a track, the dog would stop at each article and wait until her owner would come along and pick it up.

When he analyzed the Weim’s behavior, he realized that she was actually pointing the article, which, considering that she was also a hunting dog, made a lot of sense. So he made a deal with the Weim: If she would stop and point the articles, like she did when she was on a bird, he would run forward, pick up the article (in essence, as far as the dog was concerned, flush it) and then lightly tap the Weim as a signal to send the dog on along the track, the same as he did after an unproductive point on a bird or a flushed bird. That neatly solved the Weim’s issue with tracking. 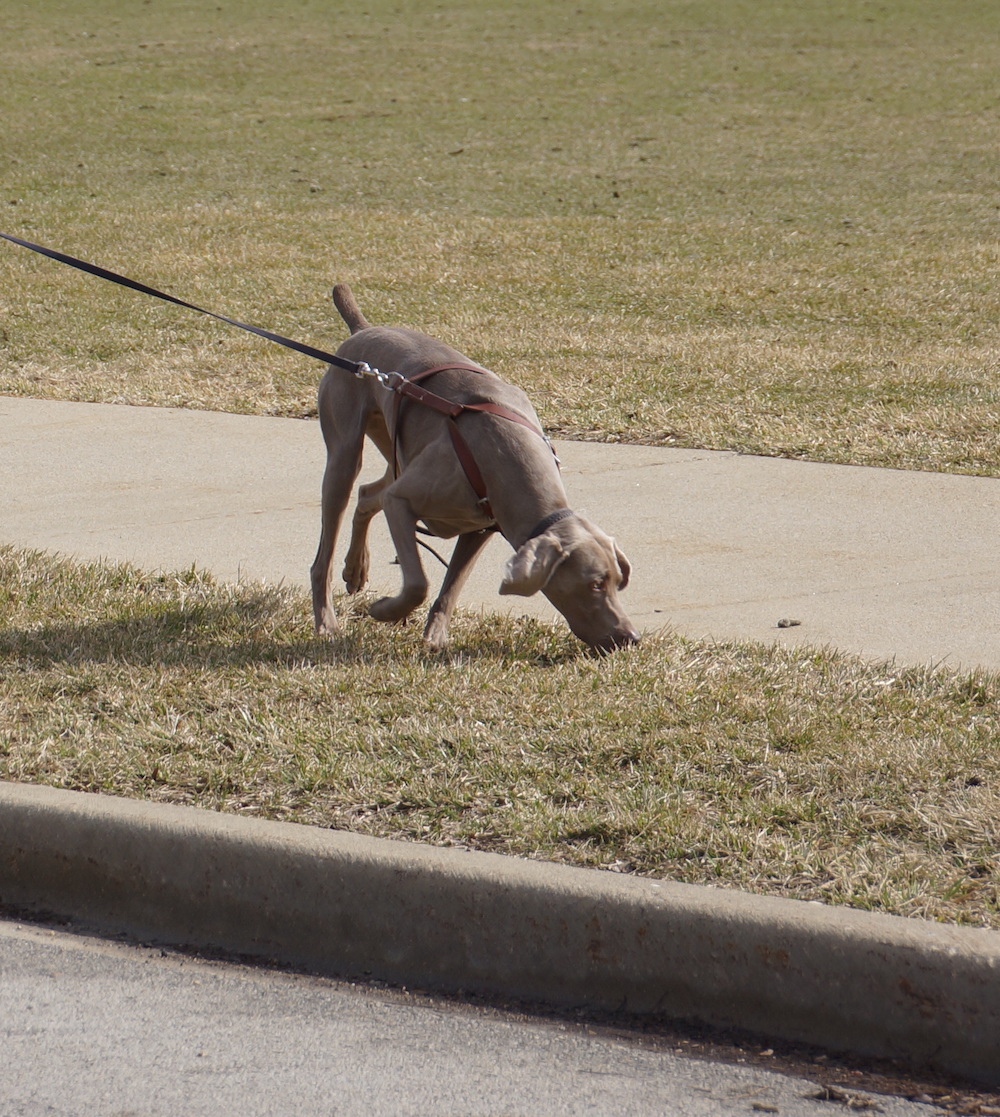 Having the Weimaraner “point” the articles in tracking tests solved her “blinking” problem with the articles and allowed her to be a successful tracking dog.

Another lady I interviewed had an earthdog issue with her Parson Russell Terrier. Although he loved hunting rats, he couldn’t stand the confines of the tunnel in earthdog tests. His owner said the PRT would go crazy as soon as he caught whiff of rat scent, but he just couldn’t bring himself to go into the tunnel after it, despite all sorts of encouragement. She said she didn’t know if dogs actually suffered from claustrophobia, but on the rare occasions when her dog summoned enough courage to go to ground, it certainly seemed like he had this problem: Just as soon as his front end got in the tunnel, he panicked, backing out at high speed, with much shaking and trembling, his desire to hunt rats overcome by his fear of tight places.

The solution, surprisingly, turned out to be barn hunt. Even though that sport has some dark, confined spaces, the dog was OK with being surrounded by straw instead of dirt. So, the deal she made with her PRT was to switch sports, and it worked, as the dog was very successful as a barn hunter.

The Parson Russell Terrier was claustrophobic in the earthdog tunnels, but the confined areas in the straw bales posed no problem for him, so switching to barn hunt made him not only happy but very successful.

The two key words in that last sentence are “it worked.” Any training technique that enables you and your dog to accomplish your objectives is a good one, unconventional though it may be. Nobody is really impressed by a “robodog.” In fact, if they have any knowledge of dog training at all, they probably wonder what sort of torture the dog has had to endure to attain that level of mindlessness. It is important to always keep in mind that even though what your dog is doing does not conform to accepted practice if it does not compromise or interfere with the ultimate objective, it is not worth getting into a fight with the dog. Field and performance events are supposed to be fun. For both you and your dog.

© Dog News. This article may not be reposted, reprinted, rewritten, excerpted or otherwise duplicated in any medium without the express written permission of the publisher.
Fri, 11/11/2022 - 10:33pm