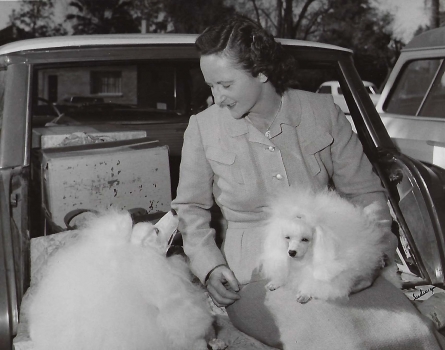 The former handler and multiple group judge was years ahead of her time
By
Karl M. Stearns
On October 1, 2020, Maxine Beam died just shy of her 99th birthday.
This article, written in collaboration with Edd Bivin in 2018, traces her evolution in the sport of dogs.
Photos courtesy of Tim Brazier. 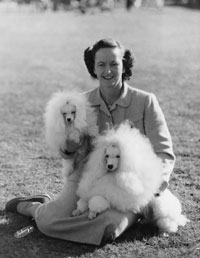 At 96 years old, Maxine Beam has lived a life full of participation in dogs. I sat down recently with Edd Bivin in my suite at the Gaylord Texan Resort outside Dallas to learn about this woman whom many knew to be demanding, sometimes difficult. But they all knew one thing: She knew her dogs.

Maxine was always one of those judges you either loved or dreaded. She was precise, demanding. She spent many years as a professional handler. She expected exhibitors to know what to do, how to groom their dogs, and show to show them.

None of this was easy for some people. “Maxine taught me early on not everyone can afford a great dog, but they can afford a clean dog, well fed,” Edd commented.

“I probably know Maxine better than anyone on this planet,” Edd told me. “She could be unpleasant. But she was also a phenomenal mentor to me. We don’t agree always today, but I respect her to the utmost and I love her. She’s a dear friend.”

Today, Maxine lives in an assisted living home in the Fort Worth area, and it was not possible to meet with her.

Edd Bivin’s life became woven into Maxine’s when he was young and together they spent many years traveling to dog shows. In fact, she handled Edd’s Pomeranians for him when he was an active Pomeranian breeder.

Of petite stature, Maxine could set people on edge. “She could be nasty as hell,” Bivin chuckled.  “Maxine had a sense of order. ‘You put things HERE, because that’s where they belong.’ ‘You brush THIS way.’”

Of course, that demeanor got “feedback” from exhibitors. “I remember one time I was ringside watching Irish Terriers,” recalled Bill Berry, a Scottie breeder from New Jersey. “Bob Clyde was in the ring with a little Irish bitch. Someone remarked ‘That bitch is little!’ Without missing a beat, Bob blurted out, ‘Well, little bitches like little bitches!’ He went on to win that day.” Maxine grew up in Fort Worth. At about 13 years old, she went to her first dog show. “She was a funny kid,” Bivin told me. “She would go down to the local stables. She’d groom horses and exercise them. I don’t know if she ever owned a horse, but it was her introduction to exhibition and competition. She showed dogs before the Second World War. The war interrupted all that because you couldn’t get tires, couldn’t get gas. Some shows continued on a local basis, but I don’t think she showed dogs during the war. Maxine, like many women of the time, worked in support industries. In Fort Worth was a bomber plant — that’s what the locals called it. Maxine worked there. She was a quality-control person in the production of bombers. She stopped as soon as she could, and started showing again as soon as the war was over.”

Edd speculated she might have known the original “Rosie The Riveter.” I imagined there were probably some crews on WWII bombers who could breathe a sigh of relief knowing the hunk of metal they were flying had passed the scrutiny of probably one of the most demanding people they would ever meet!

Originally, in her early 20s, Maxine’s interest was in Cocker Spaniels — not unusual for the early 1940s. Bivin said she had good connections in Cockers. From there, she became interested in Poodles. He told me, “She got a couple of good bitches but I don’t know if she was ever able to finish them. People complain today about low-entry breeds but it was just as difficult back then. Finding majors was difficult.” 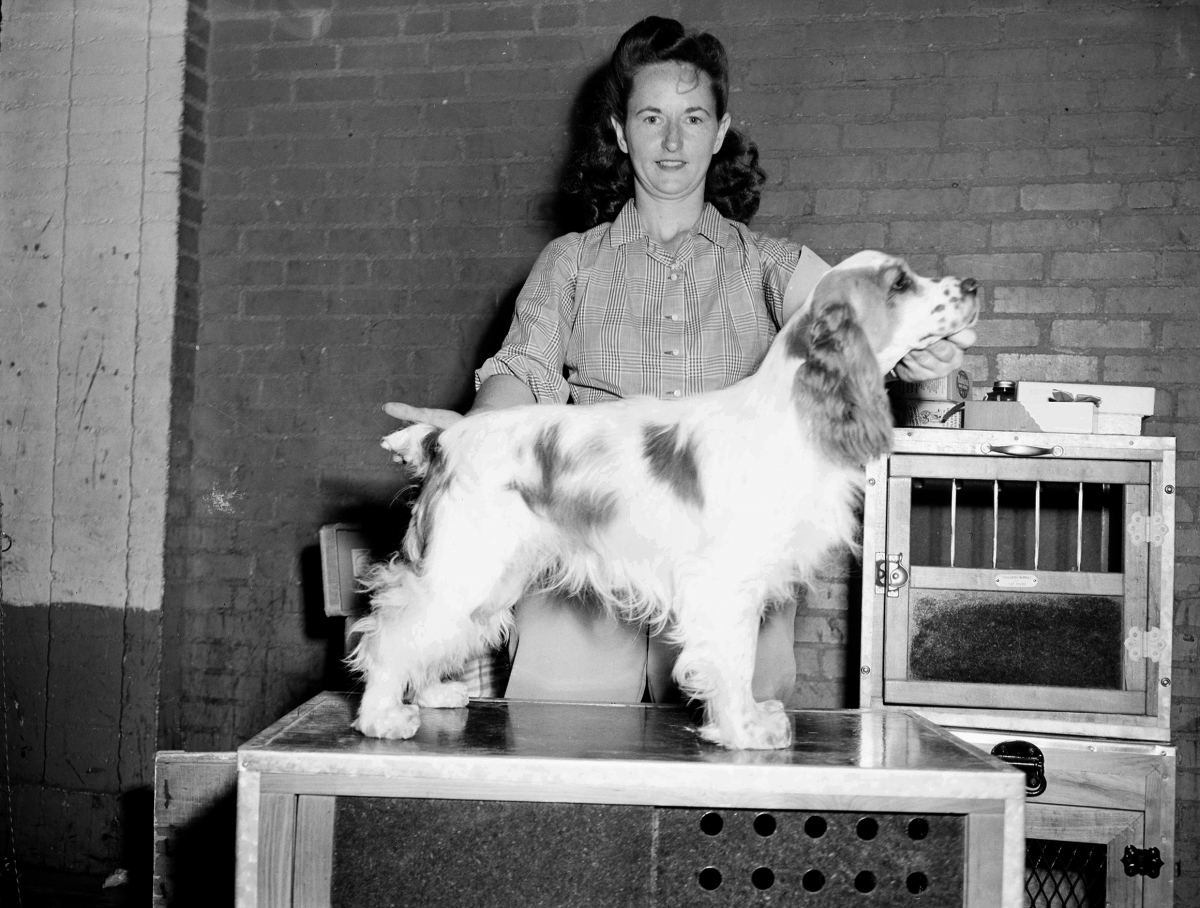 Maxine established herself as a force to be reckoned with in the ring. She showed German Shepherds for Lang Skarda, and she also showed Boxers. “She had a top-winning Boxer bitch who I believe was a daughter of Bang Away  [Ch. Bang Away Of Sirrah Crest, 1951 Best In Show winner at Westminster], called Glamor. I believe she was a runner up for the Ken-L Ration award,” Edd recalled.

Maxine enjoyed decades of showing some of the top dogs in the country. Edd tells a brief history: “In some way, she became, I think through George Bradley, involved in showing dogs for Ernie Ferguson. She also showed for George Bradley. Ernie was an all-breed judge, and that was a good step for her.

“A bitch Maxine showed for Ernie was bought by Mrs. Marguerite Tyson. That was a big step for Maxine. Maxine showed poodles for some very prominent people including Dorothy Thompson, Sand Island, which is an old name in American Poodles. It was originally Standard Poodles, then Miniatures became popular, then Toys came in on the tail end. There was a separate club for Toy Poodles.

“Maxine showed the Stormy dog for Mrs. Tyson, and then Mrs. Tyson went to Europe and bought dogs. Howard Tyler in the East showed for her, and when he scaled down, Maxine got some very good poodles through Howard. Maxine won Ken-L Ration awards, many times. Won top dog in the country a year or two with Toy Poodles for Mrs. Tyson. She and Mrs. Tyson became friends. Mrs. Tyson was a member of the Skirvin family of Oklahoma, very wealthy family. Maxine did well for Mrs. Tyson.

“From there she went to Majorie Tranchin, and that was a good move. She showed Poodles for people all over the country. She was a very sought-out, knowledgeable person in dogs. Mary Frances Crane was Marjorie’s half-sister. Considered to be the start of the Great Pyrenees breed in this country.”

Edd continued: “When this funny little lady from Texas came to California or anywhere else, watch out because she’d whip your ass. Her dogs were in beautiful condition, nicely trimmed. Maxine taught me basics. Annie taught me pretty. Maxine also taught me pretty. She’d say, “Come look at this head,' 'Look at this, look at that.' I judge dogs today on things Maxine taught me 40 years ago. That was TRUE mentoring. Real, hands-on mentoring over years. It’s not going to a seminar and listening to a know-it-all tell you about types — one to win the breed and one to go in the ring.”

Edd also recalled “the ride” to dog shows. “The first car she showed dogs from was a Packard station wagon. Imagine if you had that today! It wasn’t new because you couldn’t get new cars after the war.” It was during those long drives that Edd received a great deal of mentoring. “This wasn’t running around for brief visits,” he said. “This was the way mentoring should be. It was an experience, not just an exchange of information. Maxine was truly a mentor.” Somewhere in this “experience” Edd decided he was going to quit college and work for Maxine. “You’re going to finish your education, then you can do whatever you want,” was the response from his father.

So, on Fridays, Maxine would show up to Edd’s college, pick him up and away they’d go to dog shows. “Maxine had back problems, so we drove in two-hour shifts,” he said. “I was a good driver. I knew how to brush dogs. I was not heavy handed. After she became acquainted with me, she was supportive. She was a skeptical person. She had a strong work ethic and a personality that matched. That had a lot to do with developing me.”

When they didn’t go to shows, Bivin worked in Maxine’s kennel, which she leased. He was taught a great deal during those times. “Maxine had two old poodle gals who were friends. They ran a grooming shop. I went to work for them because I wanted to move beyond the world of Pomeranians. So, I was taught how to trim Poodles. Maxine broadened my world tremendously. She exposed me to people, different breeds, and all kinds of knowledge.”

Despite the jitters many had when showing to her, there were also some who recalled fond memories of “Miss Beam.” Kathy Ferris told me, “I just have good memories as she always treated me well and encouraged me as a young female terrier handler. She made sure we knew it was ok to stand up to the big guys!”

Maxine retired from professional handling in 1972. In 1973, she began judging. During that time, she acquired five groups and Best In Show. Judging took her to Australia, Canada, Mexico and South Africa. She judged at Westminster many times, and in 2007 she judged Best In Show at the AKC/Eukanuba National Championship Show. In 2003 she was inducted into the Nature’s Recipe Dogs in Review Hall of Fame.

When I began working on this story, I found very little recorded about the life of Maxine Beam. I could find a few random comments here and there but no stories written about her. A recent issue of DN Dog News Magazine (12/15/17) had a short write-up by Pat Trotter about Maxine. What struck me in that short write-up was the strong endorsement of Maxine as a mentor and teacher. I learned the same from Edd Bivin. Despite what came across to some as a demanding and difficult person, she willingly shared her knowledge with those who would stop to listen. She was a hard worker, and frugal. She showed only good dogs.

I’d like to think Maxine dreams about being back in that Packard station wagon, full of great dogs, driving off to another dog show. We have much to be grateful for when we contemplate the lives of those who have given so much of themselves to this sport and to others. Personally, I’d like some day to know that I could even be one sentence in another person’s story. Maxine has filled pages and pages of the stories in other people’s lives.

© Dog News. This article may not be reposted, reprinted, rewritten, excerpted or otherwise duplicated in any medium without the express written permission of the publisher.
Fri, 10/02/2020 - 10:58am