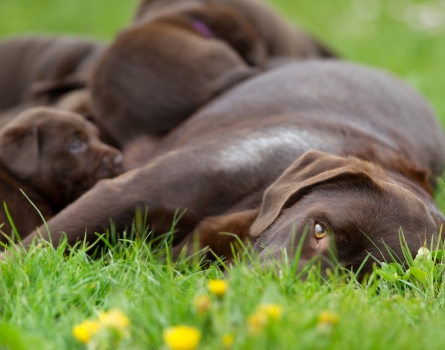 How many litters does a specialist make?
By
Geir Flyckt-Pedersen

I suppose I am not the only person wondering, especially when reading “winner ads,” about judges described as “breeder-judges” or a more comprehensive expression, like “world-famous Terrier expert.”

It is particularly interesting when you know the persons referred to, and their background, and start wondering how and why this instant elevation to international recognition and stardom happened.

I suppose that within the rule system of the AKC there are minimum demands for being approved to do a breed specialty as a breeder without required formal qualifications. But I personally know a few people described as “breeder-judges” who in their lifetime have bred one litter of the breed involved. So the title doesn’t always describe truth in any depth.

Having had a lot of time on my hands during the last couple of years, I have dived into canine history in general – to a large extent through British Dog World (sadly no longer with us) and Our Dogs, as I am fortunate to have their annuals back to the early ’60s, plus the Swedish Hundsport going back all the way to 1948. For those of you who have been unable to witness the “exterior improvement” in most breeds during the last 60 to 70 years, I can reveal that you would be, in most cases, positively surprised and even impressed.

During my 60-plus years in the sport, it has been a steady ongoing process.

And I think it will go on …

One factor that comes into the equation is of course the background and real qualifications of current and future judges. And adequately qualified breeder-judges and experts will surely be harder and harder to find anywhere …

Looking through lists of judges for major Scandinavian as well as British shows during the ’50s, ’60s and ’70s, most of the names on the lists carried a lot of respect based on personal records, background and experience.

The first British judges I met in Bergen in the early ’60s were Judy de Casembroot and Dorothy Withwell. Both easily qualified to be described as world-famous experts, and not only in their own breeds. (Mrs. De Casembroot had Treetops English Cockers and Greyhounds. Mrs. Withwell’s Seagift was a well-respected name in Greyhounds, Whippets and a number of Sporting dogs. Her cousin Lionel Hamilton-Renwick was equally famous for his Birling Min Pins and Dobes … indicating it was in her blood!) They had all been around when their own breeds were at, or close to, KC acceptance – and if they were not involved directly, they learned from the people who had influenced early breed standards, directly or indirectly.

In other words, most definitely had “firsthand” information about what, how and why breed features were important – and in many standards they even used a point system to make clear what breeders and judges should prioritize. (Some breeds still use that system – and for any outsider trying to learn, it is very useful!)

What impresses me now, probably more than it did at the time, was that both ladies took the time to explain things and answer questions asked by an innocent and blue-eyed teenager!

And after the show they also had time to talk with exhibitors who they thought were in need of help and directions, guiding them on the path to make a way forward by giving names and addresses to reputable breeders in the U.K. I know a few people took this opportunity and with their help imported dogs that were of a very different quality than what they already had. And it made some people very happy, as they all of a sudden started WINNING!

None of these ladies ever returned to Bergen to witness the progress they had made ground for in a couple of breeds. I don’t think Mrs. Withwell ever returned to Norway, but Mrs. de Casembroot established herself as a regular and extremely popular all-rounder all over Scandinavia – and I know at least one case when her breed winner was the result of her advice and guidance. When she heard about the connection, she was highly delighted!

I think terriers and spaniels were, in the early days during the period mentioned, blessed with British breed experts with solid, personal backgrounds, records and experience judging our shows!

Mainly famous breeders themselves, but there were also a number who had worked for these breeders, with history at times going back to the turn of the 19th Century. All again with basically firsthand knowledge of problems in the various breeds, what to look out for, what to promote and what to penalize! Based on practical facts and personal experience.

Some came along unable to even sign their name, using a fingerprint as a signature in their passport, but still doing fabulous jobs!

In the early days the Scandinavian kennel clubs all accepted that nowhere in the world could you find more experienced breed specialists or all-breed judges than in the U.K., so the formal qualification to judge in our countries was based on Open show experience.

BUT 99 percent of all these “imported” judges had solid backgrounds and had even gained fame as breeders of at least one breed. In some cases, a multitude. And had shown the interest and ability to judge more or less any breed, which you would have to in Variety classes at Open or Limited shows.

We are by now quite a few generations behind these early trendsetters, and I think when being informed about the thousands of FCI all-rounders, expressions like “background” and “experience” have a completely different weight and meaning compared with the earlier influencers.

How many of all those all-rounders can verify decades of records as successful breeders and owners of large kennels? Plus having gone through serious setbacks in their breeding programs – be it construction, health or temperament – and still getting back up and as a result creating the breeds we see in the ring (or even field) these days?

Judging a European show a few years ago, one of my fellow judges told me that during the previous week he had judged 21 breeds he had never seen before …

Despite being under FCI jurisdiction I believe that each member country can follow its own rules regarding formal qualifications – including what is required for a person to become an all-breed judge. And if authorized by your “own” kennel club, you are formally qualified to retain that status in all other member countries …

My earliest influence, although growing up in Norway, was actually the U.K. There, basically 90 percent – at least – of all judges authorized by the Kennel Club to award those Challenge Certificates were breeder-judges in the correct meaning of the phrase. Still, in addition to proving their skill as breeders by listing how many dogs of their breeding were entered in the KC Stud Book, they had to have their judging ability proved by judging X number of classes for the breed at Open show level. And the ultimate honor, in addition to annual breed Championship shows, was an invitation to judge at Crufts, where the selection, in the olden days at least, was partly based on how many times in your lifetime you had awarded CCs in the breed!

That probably was the reason we saw a number of seriously senior citizens stagger round the ring – and then some actually moved on to higher ground shortly thereafter ...

If you came from outside the breed, the requirements for classes judged etc., could be considerably higher – and as every application to the KC for the first time had to get the breed club’s approval, the refusal rate was high. Sounds like an effort to protect their breed, but always suspected to be as much a way for committee members to remove “intruders” to enhance their own path forward. But, of course, as in any other world, with the right status and connections everything was possible …

Still, in my humble opinion, the British system was the best ever, but unfortunately not sustainable for the world at large, which of course is a shame.

But regarding the expressions “breeder-judges” and “group experts,” maybe we simply have to accept that times have changed? Shut up and move forward?

Easier said than done for some of us!

© Dog News. This article may not be reposted, reprinted, rewritten, excerpted or otherwise duplicated in any medium without the express written permission of the publisher.
Fri, 07/29/2022 - 10:56am