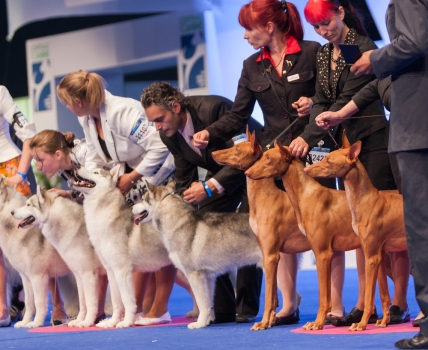 The part of the world in which we live, separated in some cases by stretches of water, can make huge differences in our lives and hobbies in so many ways.

To find out, just try a trip across the North Sea from Scandinavia to the British Isles, and you will detect cultural and procedural habits that also affect how our dog world is operated and working. And even if you cross borders between Norway and Sweden, Sweden and Finland, or Denmark and Germany, you will be able to register considerable differences regarding attitudes and traditions involving breeding and showing dogs. Despite the fact that all those countries are members of the FCI.

And the difference in attitudes and regulations is even more evident if you cross the Irish Channel from England. Of course, made even more tangible since the Irish Kennel Club joined FCI.

What brought all this into my head were two articles in the same issue of this magazine a few weeks ago, written by two contributors whose columns I always find interesting: Pat Trotter paying tribute to Frank Sabella and Andrew Brace’s “Back to Basics” article …

At different times in the ’60s, a number of young Swedes had crossed the Atlantic and then sent “letters” back home to Hundsport magazine. I remember in particular a young girl, Mona Nolinder, who had just registered her prefix Hazeldane and showed a Great Dane named Airways Hazel, which I believe came with her to the US, where I think through Ulla Magnusson (Airways), Mona got a job with Nancy Carroll Draper (of Danelagh fame). Mona  followed her Atlantic crossing with an interesting article about how professional handlers in the US could make millions …

Mona stayed in the US, and for some reason abandoned Danes and got involved with Whippets, and her name changed from Nolinder to Martin and then finally to Maytag!

Anyway, her article was followed by numbers of Swedish judges and photographers who after visiting the United States were publishing stories about their trips and especially with focus on those professional handlers – and even judges … And those stories from and about shows like Westminster, where seemingly the dog world was taken seriously, were particularly fascinating for a little boy from Bergen whose hobby made his family and friends suspect there was something seriously wrong inside his head.

Missing Sunday school to go to a dog shows … Surely on his way to hell!

When Sabella’s photo with the Standard Poodle on the beach surfaced, I was already a lost case regarding chapel or Sunday school, but by then I had also admired all those fabulous Joan Ludwig photos in Dog World and Kennel Review ... And more dreams …

Mrs. Trotter’s article reminded me of a fact I found so intriguing: That Frank had abandoned his profession as a dancer to start a new life as a groomer and handler!

If anybody tried to copy that, leaving any career to attempt to make a living from anything dog-related in Scandinavia, starvation would be the consequence!

And he actually was successful – gaining fame and making money! Unbelievable.

My American dream in this respect never materialized, but as years went by I made some interesting observations. A young terrier handler from Wales moved over here in the early ’60s, and within just a few years he won Best in Show at Westminster. Reports came back to the Old World about his success and increasing fame. Which then of course inspired a few well-known terrier handlers (terriers was the only group with any number of pro handlers in the UK) to make the trip hoping for similar success. Only most of them after a relatively short while returned home, tails between their legs, as it hadn’t been as easy as they had thought.

However excellent your grooming skills were considered in the UK, prospering as a handler in the US required grooming at a totally different level.

Plus the fact that in addition to those talents, you also needed a personality and a serious amount of “people skills”! (Plus a certain amount of charm, of course!)

And I think here was where they mainly failed.

What made Andrew’s “Back to Basics” wake me up was his description of the path to become a judge. I remember having heard Raymond Oppenheimer’s idea about starting the process in reverse order, which I think for people with decades of experience and judging experience could work! But only in the UK! Due to the fact that the country is probably the only place in the world where many breeds at all-breeds shows have entries that make it impossible for a real fan to watch any other breeds. Then in years gone by there were all these fabulous entries at open shows , but still with time to watch what happened in other rings.

Plus of course all those limited, members and sanction shows where you could meet the top breeders and exhibitors in the country bringing out their “new” puppies for practice and listen to the opinions of top breeders of other breeds.

And you were also surrounded by a number of keen enthusiasts who for a variety of reasons had no dogs of their own, but still attended any dog show of any level within their reach.

I don’t think there is or was any country in the world with the opportunity to learn about dogs and judging similar to the UK.

Or where you could start judging just one breed and, based on that, get even chances to judge at Championship level! In the UK a huge majority were judging only their own breed – and would be happy if they got the chance to do that at Championship level more than once every five years ...

But adding up: So many Brits had huge all-breed experience from Open or even lower-level shows, which they never got any credit for. As when it came to Championship level, so many breed clubs put the breaks on for any “outsider.” Officially to protect their own breed, but in many cases in order to improve the frustrated committee members’ own chances.

Some years ago I wrote an article published in Dog World: “What went so wrong …?” It was based on the fact that when I first started in dogs, a large number of British judges were given all-breed status all over Europe (and most of the world), and some also advertised themselves as all-rounders in the dog press. It was generally accepted that nowhere in the world was it possible to gain the knowledge and experience you could achieve as regular Open show judge in the UK. Most breed clubs were hyper restrictive when it came to approving “outsiders” to award Challenge Certificates to their own breed, which made it impossible for anybody to reach what we today call all-breeds status. But the world was aware of this and made its own rules.

Many people will think it is a wonderful tradition that any new judge has to be approved by the breed clubs or the breed council. In an ideal world filled with idealists and unselfish enthusiasts, it most likely could be.

And the reluctance shown by the KC to come up with a system to regain their previous worldwide influence on the sport was to me incomprehensible.

Knowing I could put together a long list of British judges formally passed to judge a handful of breeds, who when comparing background and experience were far superior to those hundreds of all-rounders gaining that status in FCI countries, I suggested to a member of the then KC “government” (who was on the list of FCI all-rounders) that it might be time to find a new system: Based on judging experience and bypassing the breed clubs, the KC could come up with something like an international all-breed status. I was told: It is not our responsibility to supply the world with judges!

And that’s where the conversation ended.

That was some 25 years ago – and not much has happened since then, I think.

© Dog News. This article may not be reposted, reprinted, rewritten, excerpted or otherwise duplicated in any medium without the express written permission of the publisher.
Fri, 04/16/2021 - 5:21pm