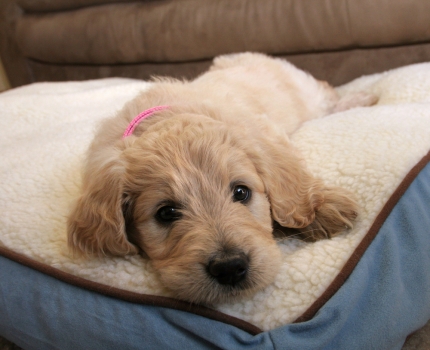 Invasion of the Miniature Golden Doodles
By
Geir Flyckt-Pedersen

Why, why, why. And I am not thinking of Tom Jones and Delilah!

I am just sharing the experience I have witnessed for decades, now accentuated by the fact that two delightful Miniature Golden Doodles have become part of my granddaughters’ lives.

Although I really hate to admit it, in a way it is nice to look at a couple of cute little puppies and just admire their cuteness without immediately feeling you have to grade them or assess their qualities. And cute they are, with lovely temperaments.

On the way to their house yesterday, I was observing people out in the afternoon sunshine, walking their dogs. The family lives just five miles away – and, having passed two Doodles immediately after leaving home, I decided to start counting.

By the time I arrived, I had seen 11 non-purebred dogs, and actually 10 of them seemingly varieties of Doodles.

Until the girls’ dream finally became a reality, I tried to steer them in the direction of a Miniature Poodle. Could probably even find a couple of Golden ones (or apricots) for them, but to no avail.

Miniature Golden Doodles it was. No arguments or advice adhered to or listened to.

And all the information about the benefits of purebred dogs from reputable breeders whose ambition and aim for decades had been to create beautiful, but also most importantly healthy dogs all fell on deaf ears.

A friend had already acquired one from a breeder in Maryland, so that was where they headed – and obviously a very attractive and sought-after place, as they had to wait for several months for their order to be fulfilled and the puppies delivered.

What impressed me, however, was how the breeder kept the girls up to date with weekly reports from pregnancy to birth and then onward.

What also impressed me was the amount of literature about all aspects of the Doodles, from potty-training, feeding and grooming, all the way up to the perfect family pet.

And from what I could judge by the line of Doodle books in their library, most of them were actually “aimed” at the youngsters of the world – and maybe especially little girls who needed a follow-up to “My Little Pony”!

I have no idea if there is any kind of organized activities behind the popularization of Doodles, but if there is, it is certainly successful, as those books are sold in numbers and as far as I can see, followed like a bible!

Just wonder what result could have been achieved if those we consider serious breeders within our own very special sphere who have the most popular, allergy “friendly,” non-shedding breeds all got together and published children’s books about their chosen breeds?

Could be an opportunity to educate the younger generation about the benefits of purebred dogs (from responsible breeders …).

I have to add here that I still find it rather tragic that any organization which calls itself respectable still allows puppy farms to use their registry!

If we are ever going to win this battle against what so wrongly is considered a healthier choice of family pet, the respective kennel clubs have to front the march and lead by example, not just a show of greed, which for a decent so-called “non-profit,” as the name indicates, should never be part of the equation!

But then to all those WHYs:

As long as I can remember and now revived by arguing with the girls, the single question WHY turns up a multitude of times whenever you discuss any aspects of pedigree dogs – and show dogs in particular: WHY they are a better and safer choice?

That we trust those among us whom we call serious breeders is one thing, but then you turn to breed standards – and this is where at times it is difficult to come up with a sensible and believable reply.

I think one of the most common WHYS involves breed standards. Why do we have breed standards when so many breeders as well judges don’t really seem to know them? Or maybe just ignore them?

WHY does a spaniel or retriever need a scissors bite, as they can just as well pick up things if they’re undershot? Why are people blowing up coats on dogs that are supposed to have water-resistant, protective cover? Why are so many breeds you see at dog shows so very different from the dogs that are being used for the purpose they were made for?

Why are the proportions of a racing or coursing Greyhound so much less dramatic than the ones seen in the show ring? Why does a Bloodhound have all that excess skin?

Does it harm a dog in any way to have light eyes? Or too large ears? Or be missing a few teeth?

Why is it OK to lift a terrier by the tail is a popular one.

And I could go on and on, quoting questions asked by “non-doggy” friends who have turned up at dog shows and wanted to know what this crazy hobby is all about …

I know there are lots of enthusiasts whose circle of friends includes people exclusively from within the sport – and at times I have envied them, as there are no explanations required.

Some of these questions are fairly easy to address, while for others it might be rather difficult to come up with a good answer.

Apart from the areas of health and temperament, the area of looks and the significance thereof don’t necessarily have rational answers?

Then coming up with comparisons to art, design, balance and beauty on par with works of art can of course be relevant.

But in the end a question I think we all at times have asked ourselves: WHY? What is driving us to keep going through years of pain and heartache?

I can only speak for myself and what has been my ambition during most of my life: To hopefully one day breed an animal that can be described as Perfection – both in relation to my own dreams as well as how I interpret that special breed standard!

Hasn’t happened yet. But maybe one day?

And still my favorite moments have really never had much to do with dog shows, but more when you get feedback from your puppy buyers that they have added a perfect new family member – and best of all was when they returned after 15 years hoping to find a “replacement”! In my humble opinion the greatest compliment any serious breeder can hope for, and it happened again and again.

But today the replacement would more likely be a Doodle! Which makes me wonder: Is it maybe too late to restore the interest in purebred dogs and the respect for their hard-working breeders?

© Dog News. This article may not be reposted, reprinted, rewritten, excerpted or otherwise duplicated in any medium without the express written permission of the publisher.
Fri, 04/29/2022 - 9:47pm